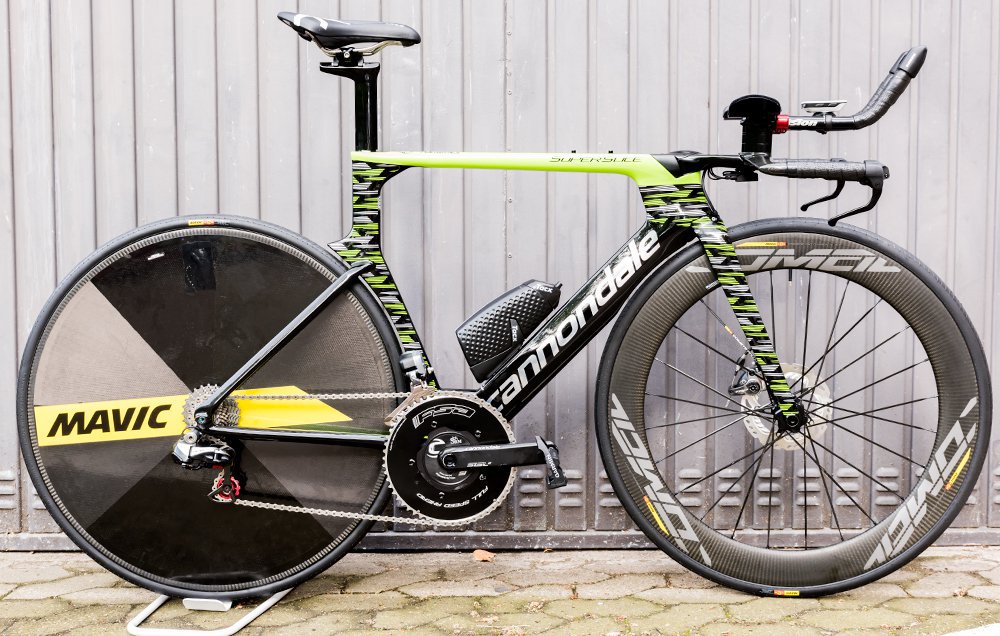 The 2017 Tour de France is the first Tour to allow disc brakes. Cannondale-Drapac’s Alberto Bettiol was aboard this Super Slice Disc, which debuted at the Tirreno-Adriatico in March. 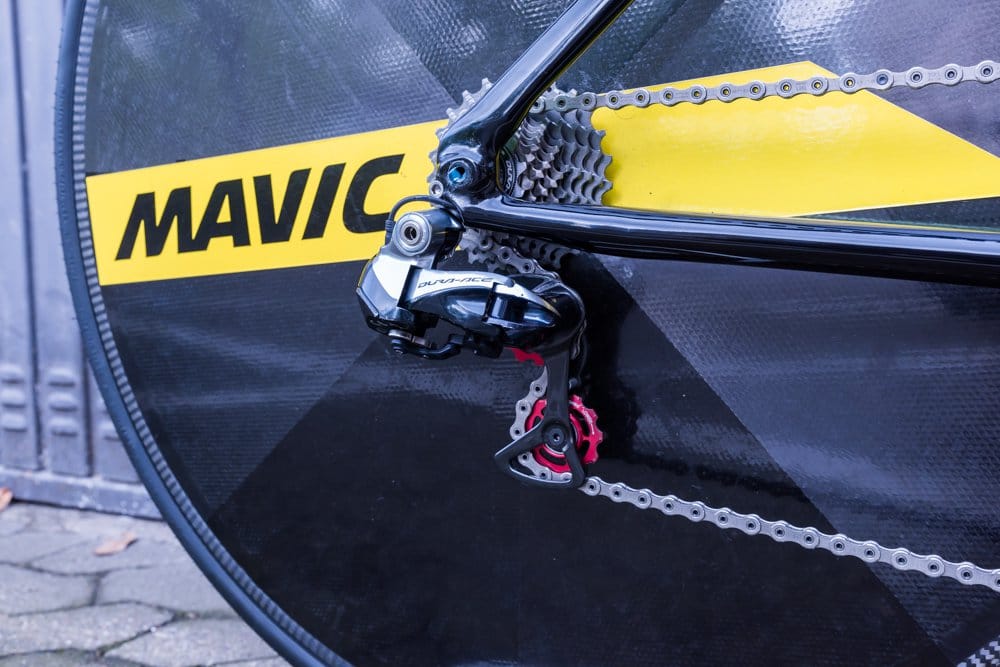 There are good reasons for equipping a TT bike with disc brakes. Modern time trial and triathlon bikes often have tortured brake cable-and-housing routing, which increases friction and dilutes braking power, control, and feel. Plus, TT-specific brakes are not designed for power and control but to integrate into the frame for clean aerodynamics.Disc brake should alleviate all this, and provide increased power and control a disc brake offers, as well as smoother smooth operation because a hydraulic brake system largely immune to complex routing (though Bettiol’s bike uses a cable-actuated discs: more below). 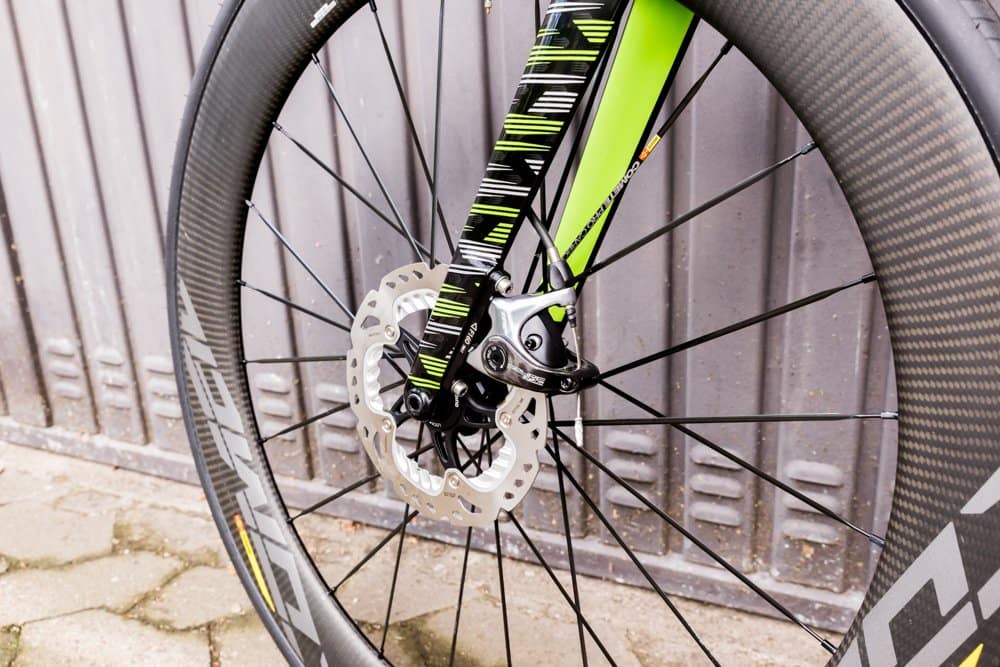 But, of course, there may be drawbacks. Disc brakes may be guilty of aerodynamic misdemeanors (though the data is incomplete), and in the individual time trial riders are not afforded the protection of a peloton, potentially magnifying those deficits. In time, however, product and design advancements should mitigate any aero penalties disc brakes currently incur.

Weight is another drawback of current disc-brake equipment, with disc bikes potentially weighing 300 grams more than a rim brake version. But weight is not the biggest concern in a flat time trial like Stage 1 of the 2017 Tour de France. Based on how rapidly the weight gaps between rim and disc equipment are diminishing as the equipment evolves, the weight issue will largely disappear in the future. 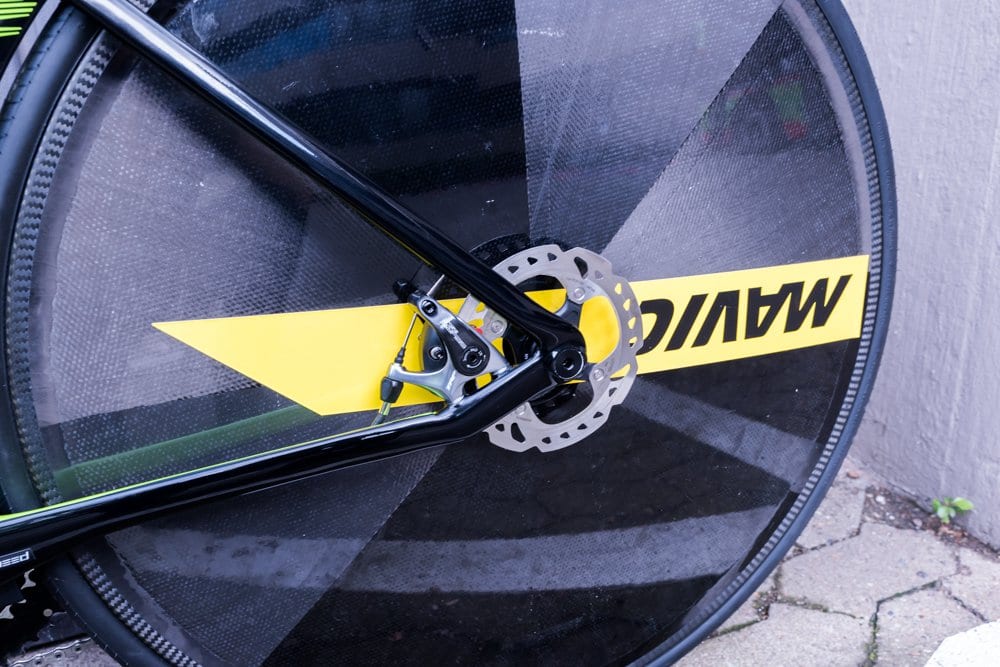 Cannondale-Drapac does not have a drivetrain or brake sponsor, so the team is free to pick their parts in those areas. On this bike, we see a Shimano drivetrain (the team buys the Shimano Dura Ace drivetrain for its bikes) paired with TRP’s Spyre SLC mechanical disc brakes. At this time, no full-hydraulic disc brake system for TT exists, though Shimano is developing a solution that may be released later this year. 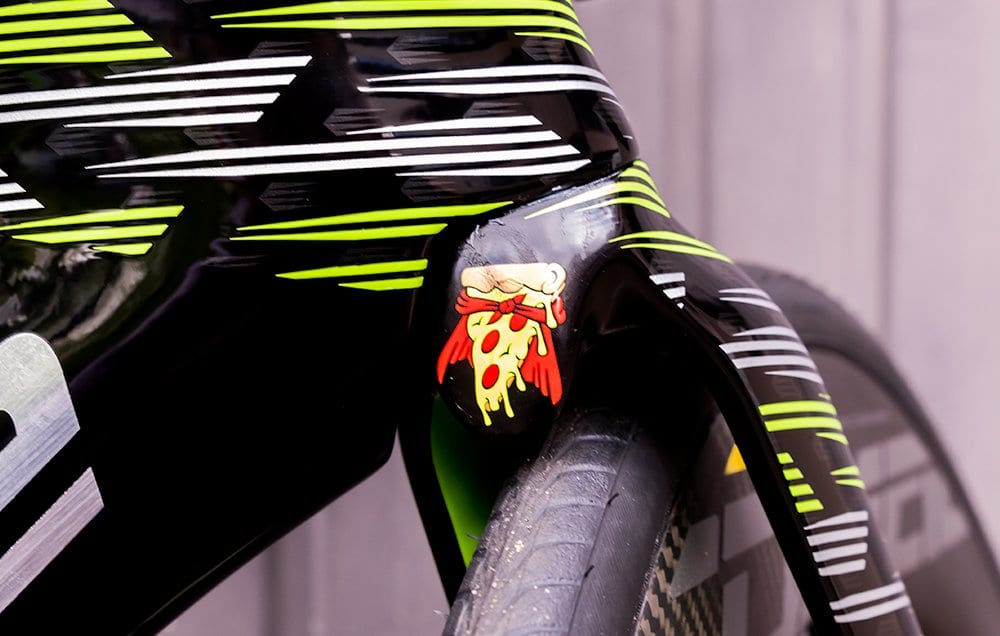 Based on the conversations my colleagues and I have had with team representatives so far, apart from the opening TT, disc brakes will make a somewhat tepid debut in this year’s Tour. Quick Step and Specialized representatives have confirmed that some of the team’s riders–Marcel Kittel, Fabio Sabatini, and Zdenek Štybar–should ride disc-brake bikes in some stages. And when questioned outside the Katusha-Alpecin technical truck, SRAM representatives emphatically told us that at least some of that team’s riders will use eTAP HRD-equipped Canyons in this year’s Tour de France.

Another potential disc brake bike to look for in the peloton: a new Giant Propel Disc bike. We spotted one at the Team Sunweb truck, but it was whisked away by mechanics before we could grab a photo.

So while 2017 may be remembered as the year disc brakes debuted in Tour de France, it looks like a disc brake takeover of the peloton is still to come.