Tom Boonen bowed out of international cycling yesterday with a 13th place finish at Paris-Roubaix. We take a closer look at the one-of-a-kind Specialized Roubaix bike he used in his last professional race.

Tom Boonen bowed out of international cycling yesterday with a 13th place finish at Paris-Roubaix. We take a closer look at the one-of-a-kind Specialized Roubaix bike he used in his last professional race. – By Joe Lindsey 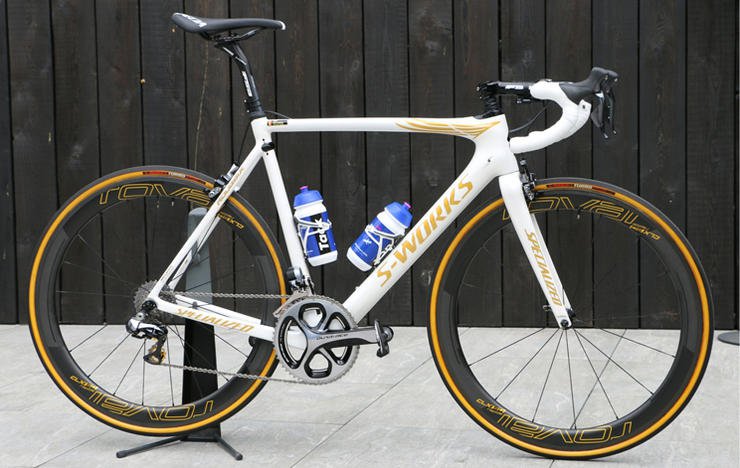 Boonen’s Last Roubaix
Tom Boonen’s has just ridden his last Paris-Roubaix. After dedicating 16 years of his life to the sport he is no longer a professional bike racer. Here’s the custom Specialized Roubaix bike he used at yesterday’s Paris-Roubaix. It features Shimano Dura-Ace Di2, Roval wheels, and an FSA cockpit. 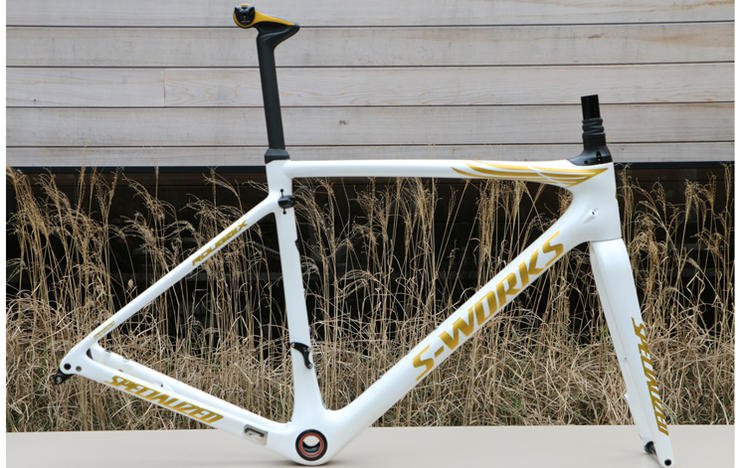 The Frame
Specialized will sell a limited-edition run of these Roubaix framesets to the public. Price: R70 000 est. 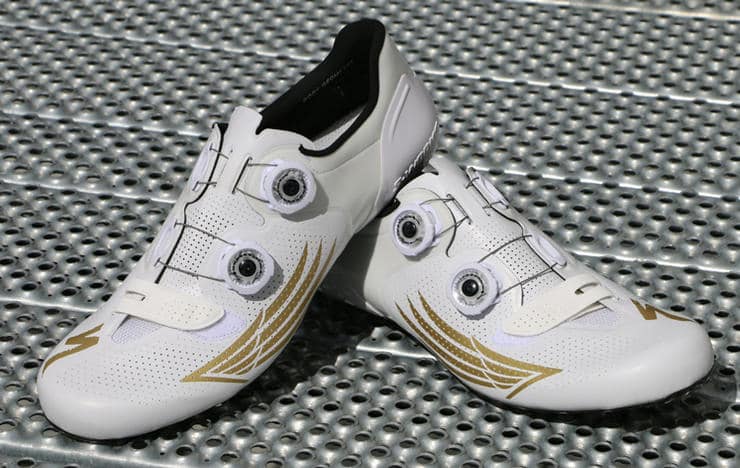 The Shoes
A limited run of matching S-Works 6 shoes will also be for sale. 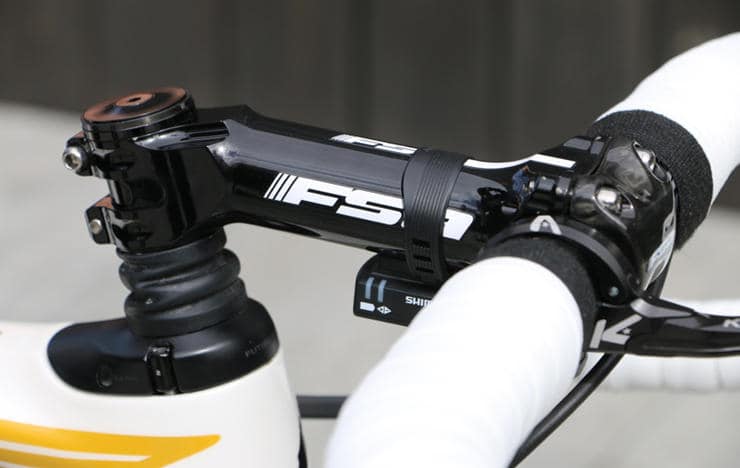 The Suspension
The heart of the Roubaix is FutureShock, a telescoping suspension system with 30mm of up-and-down movement that helps isolate the rider from the jolts of the cobbles. Springs come in three different weights. Overall, it adds a few hundred grams to the frame, but the redesigned model shed weight elsewhere so frame versus frame, it’s almost a wash. The Future Shock does yield a taller stack height, however, so Boonen uses a negative rise FSA stem to get back to his long-low position. 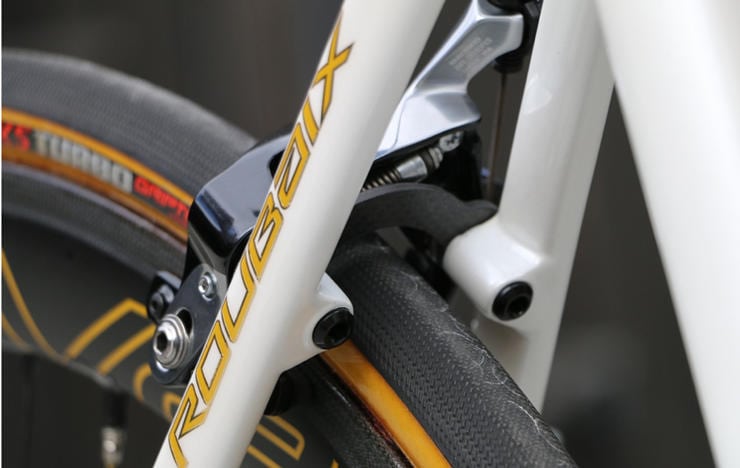 The Brakes
The stock Roubaix, which debuted last year, is a disc brake-only bike, but Specialized’s team bikes are a custom mold featuring direct-mount rim brakes, which are lighter but can fit the wider tyres riders run at Roubaix. The replica bikes will be disc-brake, however and no production of rim-brake Roubaix models is planned at this time.

The Artwork
The four-feathered wing logo represents Boonen’s four wins in Paris-Roubaix, tied with Roger De Vlaeminck for the most wins in the race’s 121-year history. 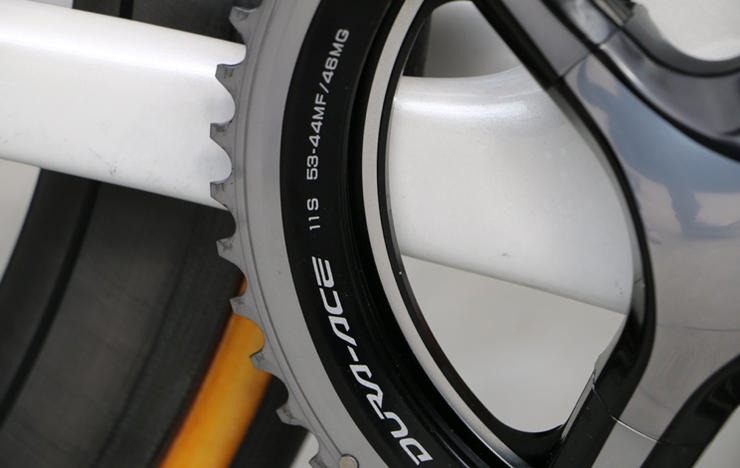 The Gearing
Paris-Roubaix is a peculiar race: almost dead-flat, and with punishing cobbles that require exactly the right cadence to master. For chainrings, Boonen picks a 53-tooth big ring and a 44-tooth small ring. 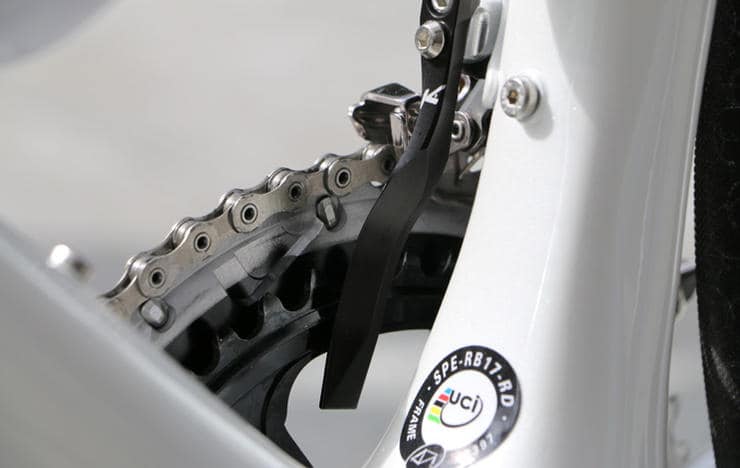 The Chain Catcher
Boonen was covering an attack at last week’s Tour of Flanders when his chain derailed. Then the same mishap hit his spare bike. A K-Edge chain catcher was fitted to prevent similar problems at Roubaix. 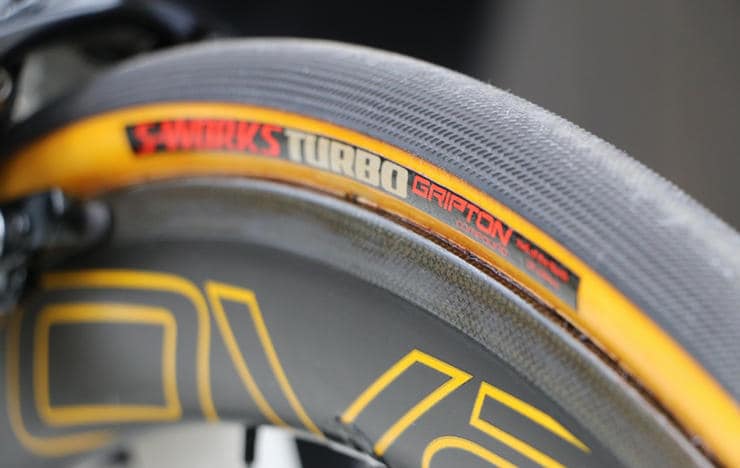 The Tyres
Roubaix requires special tyres. Most riders compete in regular races on 23mm or 25mm wide tyres. For Roubaix, they’ll step up to 28s. Specialized’s new “Hell of the North” tyre is a variant of the Turbo Cotton. We’ll have more details on it shortly. 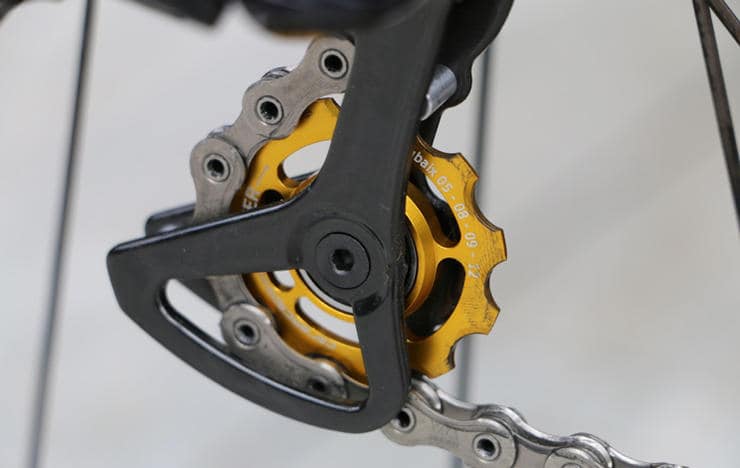 The Pulleys
Quick Step mechanics swap the stock Shimano rear derailleur pulleys for CeramicSpeed’s upgraded version, which save a precious few watts by rolling on ceramic bearings. Look closely though: Boonen’s are etched with the dates of his four Paris-Roubaix victories.