4 Ways Your Tyre Pressure Is Wrong

The single biggest performance improvement you can make on your bike isn’t a lighter set of wheels or electronic shifting. In fact, it isn’t an upgrade at all - and it won’t cost you more than some time and, maybe, what you’d spend on a new roll of bar tape.

The single biggest performance improvement you can make on your bike isn’t a lighter set of wheels or electronic shifting. In fact, it isn’t an upgrade at all – and it won’t cost you more than some time and, maybe, what you’d spend on a new roll of bar tape. – By Joe Lindsey 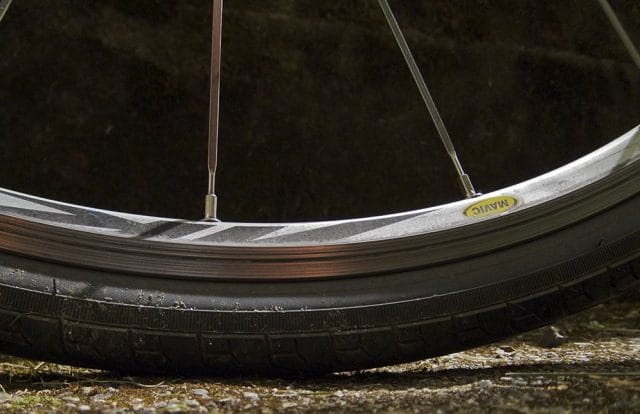 It’s tyre pressure. And if you don’t pay attention to it, yours is probably wrong. Here are four main issues riders often have with tyre pressure and how to fix them.

1. You don’t actually know your pressure
If you’re inflating your tires with a floor pump, that pump probably has a gauge. The bad: It’s not that accurate. Floor pump gauges measure pressure at the gauge, so they’re measuring air pressure inside the pump, not the tyre. And gauge quality varies; it may be off only by a few bar for a standard road pressure, but we’ve seen pumps that are off by 0.7-1bar. The good: Most gauges are at least consistent even if they’re not totally accurate. So at least you’re inflating to the same pressure each time. The fix: Get a separate gauge. There are several pricey digital gauges out there if you want to go that route. But you don’t need to. A good needle-type Presta gauge should do the trick.
2. You’re using the same pressure front and rear
It’s pretty common to simply inflate front and rear tyres identically. But your weight balance isn’t 50-50 front to rear. For road riders, it’s more like 40 per cent front, 60 per cent rear in most cases, according to a study at the University of Colorado. But it can vary; CU’s study found a range from 33-67 to 45-55 across the athletes they tested. If you’re curious where you fall, there’s a simple test:
Step 1: Weigh yourself holding your bike and wearing your kit (including shoes).
Step 2: Put the scale under one wheel and a block of the same height under the other. Have a friend hold you up, then read the scale.
Step 3: Swap to the other wheel.The total amount should match your static weight from step 1, and the weight from steps 2 and 3 give you the percent of total weight on each wheel. The bad news: I know of no scientifically backed formula for adjusting tyre pressure based on weight distribution. This is an instructive test because it tells you what your weight balance is, but it won’t give you a firm equation to adjust tyre pressure.The truth is that whatever pressure you prefer is going to depend on a variety of things including your tyre choice and riding style. But it’s also clear that you shouldn’t run the same pressure front and rear. If you weigh 68kg with a 40-60 weight distribution, that’s 41kg on the back wheel and 27 on the front. So it stands to reason that you should be running proportionately less pressure up front. It won’t be 50 per cent less, but it’s not unreasonable to think it could be 15-20 percent less.3. You’re not checking it regularly
Tyres leak air over time. Butyl tubes (the most common kind) leak far less than lighter-weight latex versions, but they still lose a few bar a week (loss rates increase with pressure). You probably don’t need to check every ride, but at least once a week, grab that new gauge you bought and see whether the tyre has lost any air. One instance in which you’ll certainly need to re-inflate: if you repaired a flat recently with CO2. Carbon dioxide is highly soluble in butyl rubber (nitrogen and oxygen, which make up 98 per cent of our atmosphere, are far less so), so it basically permeates right through the tube wall, and fast. If your last ride included a CO2 repair, definitely get the pump out before you head out again. In fact, if you flat early in a ride and fix it with CO2, check the tyre again after an hour or so; it will probably need topping off.

Our bias is almost always to overinflate. The maximum pressure listed on the sidewall is generally too high—plus, it doesn’t take into account any of the factors that influence your tyre pressure: rider size, terrain type, and more. For years, we were told by coaches (and, ahem, cycling journalists) that higher pressures offer less rolling resistance. And higher pressures also reduce the likelihood of pinch flats. But especially if you’ve moved to wider tires, you should lower your pressure.
Here’s why:
•Wider tyres have a higher volume, so you should decrease pressure proportionately. They also have less sidewall deflection, which lowers rolling resistance compared to narrow tyres at a given pressure.
•Rolling resistance does increase with lower pressure, but several studies show that across various road tyres, rolling resistance increases only slightly, on the order of a few watts of power, even at pressures down to 4bar on standard road tyres. Then, consider that rolling resistance makes up only a tiny fraction of the forces we have to overcome (most is either wind resistance or, on hills, gravity). The biggest differences in rolling resistance aren’t in pressure, but the actual tyre you’re using.
•A lower pressure increases cornering grip, partly by increasing contact patch. A lower-pressure tyre also deforms more around the road surface—that’s partly what’s responsible for the increase in rolling resistance. But a tyre inflated very high will tend to feel chattery, particularly on a chip-seal type surface, because it’s literally bouncing off of every imperfection in the road surface. Bonus: In addition to increasing grip, that lower pressure also feels much nicer.Experiment with tyre pressure by deflating front and rear, say, 5 per cent each (per cent, not bar because remember, front and rear are different and should be changed proportionately). Go ride and take note of how it feels; don’t be afraid to drop a little more. Ideal tyre pressure gives you a comfortable ride with a confident feeling in corners. Once the front wheel starts to feel the least bit squirmy in hard cornering, add a few bar back in. Measure front and rear with your gauge and write it down, but remember—that exact pressure may change if you switch tyre sizes or brands.