5 Performance Technologies That Will Change the Way You Ride

The future of cycling tech is already here.

The future of performance cycling tech isn’t a glimmer in the eye of a forward-thinking engineer: It’s already here and accessible if you know where to look. From pill-based body temperature regulation to pedals that teach you to ride more efficiently, riders looking to soup up their cycling have a dizzying array of options.

Here are five of the technologies we’re most excited about—and how to (kinda sorta) include them in your training right now. 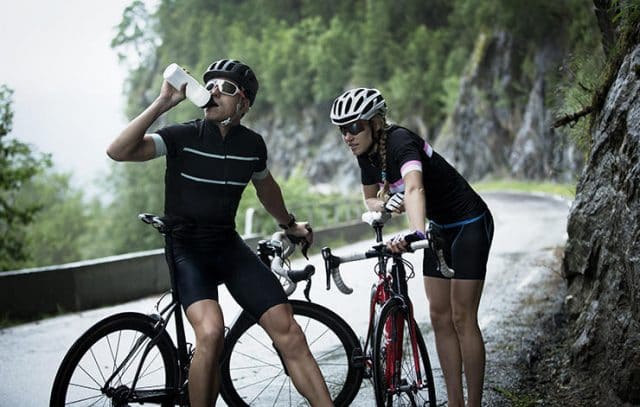 Clothes That Monitor Your Hydration

Staying optimally hydrated is a tough balancing act: drink before you feel thirsty, but drink too much and you’ll feel waterlogged.

But soon, we won’t have to monitor our water levels so blindly—or even monitor them ourselves. Bicycles, accessories, and even cycling apparel equipped with sensors will tell you when to take a drink and when to let your water bottle rest in its cage.

These sensors employ bioelectrical impedance vector analysis (BIVA), a method that less sensitive products have used for decades to measure things like body composition. A small electrical current passes through the skin from one contact patch to another, and your personal water level is revealed by subtle changes in how much electricity gets impeded by body tissue.

Current commercially available BIVA equipment is easily portable—if you’re, say, a medic. However, the technology involved continues to shrink and require less power to function, so patches could soon be integrated into gloves, handlebars, clothing, or headgear. One pro team used BIVA daily during the 2014 Giro d’Italia to monitor hydration, and a manufacturer, Akern/RJL Systems, exhibited a working version of its BIVA technology at the 2016 Science & Cycling Conference in Caen, France.

Use It Now: The race is on to market the world’s first wearable BIVA-based hydration sensors. Competitors include Bitome, the Novel Devices Lab at the University of Cincinnati, and BSX Technologies, though none of their research has produced anything beyond prototypes.

However, there are “smart” water bottles already available that communicate with smart watches and smartphones and remind you when to drink. Some of the more popular versions include the Pryme Vessyl, the H2O-Pal, and the Hidrate Spark. The Trago Cap is being developed to work likewise and fit on all widemouth water bottles. 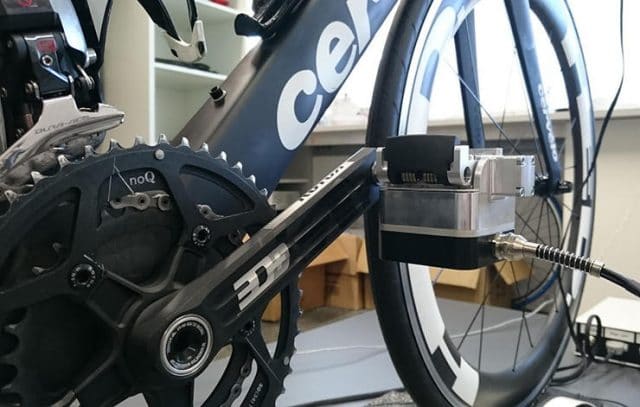 Pedals That Make You More Efficient

Cyclists waste energy by not directing it squarely through their feet on the pedals, meaning some of their hard-spent efforts don’t go straight into turning the cranks. Dr. Borut Fonda reckons his force-torque pedals can tell you if you’re wasting watts.

“In a bike fitting we can see how effective your pedaling is,” says Fonda, program director at diagnostic and training company Cycling-Science, based in Slovenia. In a lab-based bike fit, he is able to measure the total force of the rider, and sensors inside the pedals measure how much of it moves through the cranks. The difference between the two numbers is how much the rider wastes, helping Fonda augment riding position accordingly.

Currently the force pedals are connected by wires to diagnostic equipment, so they can only be used in the studio for biomechanical assessment and bike fitting—but a radio-linked wireless upgrade is being tested so riders can use them while riding, Fonda says.

Use It Now: Apart from tried-and-true trial and error—moving foot position, changing shoes, or adjusting cleats yourself based on feel—many bike-fit experts use fitting technology that can align your feet optimally. You won’t get force-based feedback about efficiency, but you’ll end up in the position most likely to do you good. 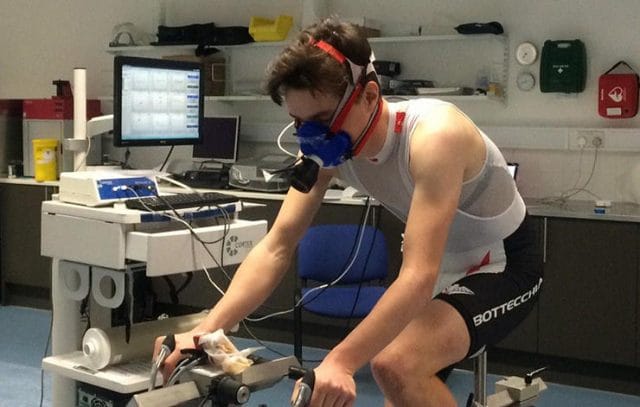 Electrodes That Boost Your Endurance

In a perfect world, the only real reason to stop riding would be fatigue. And if a burgeoning practice that’s being called ‘brain doping’ takes off, there could be a way to ride even farther before fatigue sets in.

Researchers realised some fatigue-quashing results in testing in 2013, when Brazilian scientists saw perceived exertion drop and power grow in cyclists after a 10-minute round of transcranial direct-current stimulation (tDCS), which involves sending currents to the brain’s motor cortex (the part of the brain that controls the legs) through head-based electrodes; Red Bull’s Project Endurance has had similar success.

Today, sports scientists at the University of Kent are involved in ongoing brain-stimulation research to fine-tune and further evaluate this. In their studies, cycling subjects on stationary bikes receiving tDCS were able to pedal for an extra two minutes before reaching exhaustion relative to volunteers who were unknowingly given a placebo.

Brain doping doesn’t alter physiology: The heart rates and lactate levels of test subjects in the Kent experiments were the same in both groups. Instead, it merely reduces a rider’s perception of fatigue. Tangentially, the researchers say a study of whether tDCS reduces exercise-induced pain will be complete in a few weeks.

Use It Now: Lucky for EMTs, tDCS for home use isn’t yet a thing. But you can still boost your body without shocking your brain.

Pharmaceutical stimulants used for physiological doping can be addictive, have undesirable side-effects, and (cough) get you banned from competition. Caffeine, however, can legally help reduce fatigue in moderation because its molecules block others from telling neurons that you’re tiring. 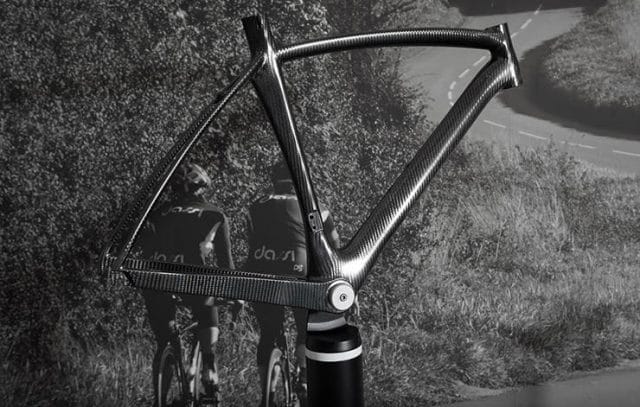 Bikes That Can Track All Your Vitals

The key? Printing these vanishingly small gadgets with graphene, and embedding them in the plastic matrices of carbonfibre frames.

Graphene is a two-dimensional form of carbon with amazing properties (like conducting electricity better than copper). It’s produced in atomic-scale platelets, so it weighs almost nothing.

English company Dassi Bikes uses graphene to improve frame resilience, but CEO Stuart Abbot envisions more from it. The next step is to harness graphene’s electrical properties so it measures how rider and machine work together.

Dassi’s first foray into graphene-printed circuit monitors will be used in a frame prototype scheduled for production in October, Abbott says. The Dassi device will function as a tracker, using cell phone signals to report its location should the bike be stolen.

“We can 3D-print graphene-based circuitry onto a piece of carbon today. That’s not a problem at all,” says Abbott, “We have a grander vision, to do that intelligently, across the bike with a multitude of sensors, which is the program we’re now on.”

Strain gauges, force sensors, and accelerometres are only the start. One day your bike will know you as a rider better than you know yourself.

Use It Now: The same tasks are performed by readily available power meters, bike computers, GPS trackers, and body monitors, but they require batteries, ports, and cables to function. Graphene circuits could gather the same data while acting as wires and aerials at the same time.

If you’re really jazzed about the idea of a super-connected bike, Taiwanese company SpeedX’s Leopard and Leopard Pro road bikes have navigation-enabled bike computers built into their cockpits. 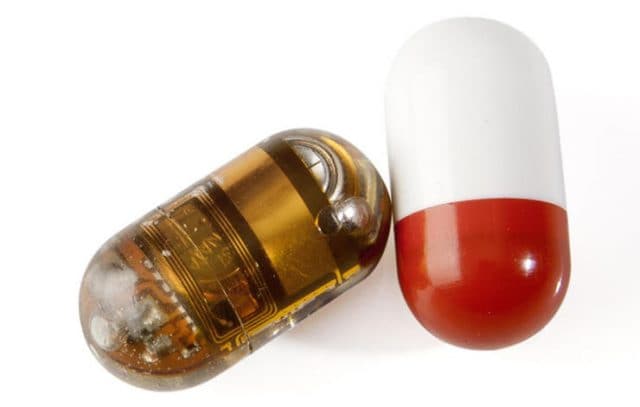 A Pill That Monitors Your Temperature

Coaches and riders can easily track lots of data these days, including heart rate,  power output, and beyond. And thanks to companies like France-based BodyCAP, these data sets may include real-time temperature readings taken from inside rider’s bodies.

Muscular power improves by 4 to 7 per cent for every 1°C (1.8°F) increase in body temperature—one of the big reasons we warm up before a ride or race.

“But if we warm up too much or get too hot while we’re cycling, it can affect performance” adversely, says BodyCAP Directeur-Géneral Sébastien Moussay.

So he’s put a thermometer in a pill. Once swallowed, this teched-out lozenge radios your core temperature in real time to a bar-mounted display unit that can actively warn of imminent overheating. The pill can also store data for later download, and so can be used in competition without the weight penalty of the bar-mounted display.

Use It Now: Aside from a potentially uncomfortable insertion of a wireless digital thermometer, capsule thermometers are also available from HQInc, although these don’t yet offer data storage.