With the Tokyo Olympics looming large, it wasn't a huge surprise to see Scott launch a new Spark for Nino.

Swiss cycling behemoth Scott just launched its all-new Spark, and for once the ‘all-new’ bit was just that. The quiet purchase, nearly two years ago, of a niche builder called Bold made the new direction for arguably the world’s most successful cross country bike.

Back then, it was all “The two companies are both based near Biel, Switzerland, but Bold will remain as an individual brand … will now be strategically supported by Scott with regards to sourcing, logistics, global distribution and marketing.” Sure… 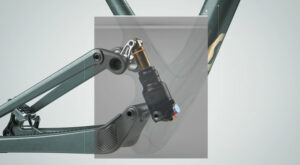 Bold’s hidden-shock design created some of the most aesthetically-pleasing bikes on the market, so it is no surprise that the new Spark is supermodel-slinky. The ride should be spot-on, too; with Nino Schurter looking for more Olympic glory, there is no chance the new Spark would carry any disadvantage compared to the tried and tested one that has carried him to so much gold, silver and bronze. 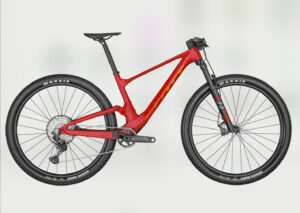 According to Scott, the “Integrated Suspension Technology” allows for a frame design with superior lateral stiffness while retaining a low weight. It’s also said to allow a lower shock placement for a lower centre of gravity. Plus, there’s space for two water bottles to be mounted within the front triangle. Fundamentally the new Scott Spark is still a single-pivot design, relying on material flex in the seat stay where the original Bold Cycles used a pivot at the rear axle.The RC boasts 120mm of tuned suspension travel, front and rear, 29×2.4″ tyres and a frame weight (for the top-tier HMX-SL) of 1 870g including the rear shock. 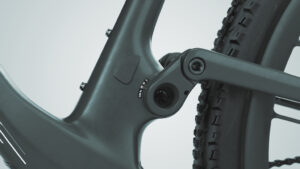 Remove the bolt-on hatch cover and you’ll find a fairly standard trunnion-mount rear shock. The shock’s adjusters and valve for the air spring sit at an easily reached point. And adjusting sag is simply done with the indicators marked next to the top pivot point. 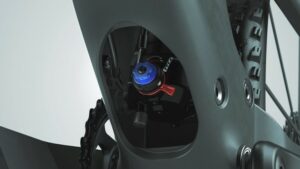 There is also a 900-series in the initial release of this new Spark – the frame is the same as the RC, with 130 mm travel on the front, larger capacity rear shocks, burlier tyres, and wider bars. The 900-series also offers lower-cost alloy frames with all the same features as the premium carbon options.

Both platforms continue the long-running TwinLoc suspension remote. Mounted on the left side of the bars, this remote lever controls the three compression (and travel for the rear) settings of both the front and rear shocks, the earliest of the Sprint-Climb-Descend on-the-fly togglers. This new version still does that, it also adds in a third lever for the dropper post, in an attempt to tidy the bars up a bit. It is now an even bulkier affair than before, but function trumps form, for as long as you keep your left knee clear of it all! 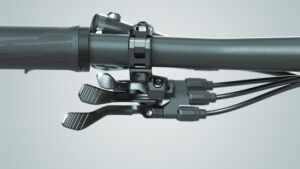 The Nino-bikes have slackened the head angle a smidgen, compared to the 2021 Sparks, with a shorter wheelbase and a steeper seat angle contributing to a tighter cockpit but a great combination of aggressive climbing abilities, and demon descending. Short, sharp and begging to be thrashed, pretty much exactly how Nino rides. Will it be too much for us mortals? Fear not, the 900 is a lot more sensible: the 65.8º head angle is massively slacker than the 67.2º found on the RCs. The extra 10 mm of suspension travel contributes, while the rest of the change comes from the Syncros-Acros angle-adjust headset. This ZS56 top and bottom headset allows for +/- 0.6º head angle adjustment and is said to be switchable without having to cut or undo any cables.

Both the RC and 900 have a wider 55 mm chainline that places the chainring about 3 mm further out than most Boost set ups. This allows Scott to gain tyre clearance, while also providing the option to run up to a 40T chainring, which is not a consideration for many of us (most of us) but does tell us how involved Nino was in the design of the new Spark.

Most of the new Sparks feature a new one-piece handlebar and stem from Scott-owned component brand Syncros. This new Syncros Fraser IC Combo is designed to work with the integrated cabling and to smoothly capture and guide the cables onto the headset. The bikes can be used with a normal stem and handlebar, but of course they’ll look cleanest with the stock setup. 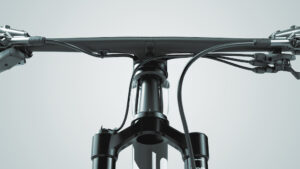 Speaking of the cables, they’re now internally routed through the above-mentioned headset. The rear brake hose, rear suspension lock-out, dropper post remote, and shift housing (if applicable) all enter below the stem and are guided along the fork steerer tube and into the frame. It’s not too dissimilar to what we’ve seen with the likes of Canyon’s Exceed hardtail, but the Scott has a LOT of cables to channel, so the Spark will never be as clean up front as some. 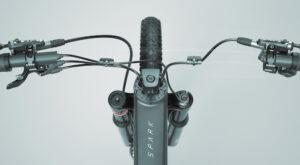 The SRAM Universal Derailleur Hanger is a great consumer-friendly specification, as is the clever tooled thru-axle where the handle features a T25, T30, and 6 mm hex that will not only undo the thru-axles, but adjust all the pivot hardware on the bike, too. Scott has stuck with the BB92 press-fit bottom bracket.

The sexiest mass-production mountain bike yet produced will be available late August/early September, with South African pricing still TBC. There will be 21 different models, ranging from truly competitive alloy versions (we have had a sneak peek at the Euro pricing) to an eye-watering Nino replica machine. They won’t stay unsold for long, though. Just look at it! 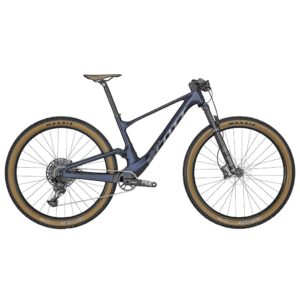