You are big in the bike industry, and your 7-foot-1 neighbour needs a new ride: Building a bike for basketball legend Shaq.

When Thomson Bike Products COO Terry Lacy moved in next door to basketball legend Shaquille O’Neal’s home in Atlanta, he noticed that Shaq, who’s seven-foot-one, rode a bike. And he rode it a lot—so much that Lacy noticed his current ride could definitely fit him better.

So Lacy decided Thomson would make Shaq a bike that fit him perfectly—perhaps the biggest bike they would ever make.

“We took a playful approach with the Shaq bike,” Thomson Bike’s Product Manager Mike Christensen said. “He wasn’t going to be out there dropping enduro, but it needed to be strong. We wanted to make something that had the look of something aggressive but provided a more comfortable riding position for him—that was his request.”

Christensen oversaw the building process of the bike they dubbed The Thomson beast. He designed the frame and coordinated the design of the bike’s components, both in-house and out. Christensen took what he knew about Shaq—his height (seven-foot-one, or 2.16m), his shoe size (23), and a few other measurements—and started scaling up what he knew about bicycles for regular-sized folks. From there, he created a custom-butted and shaped “XXL” titanium frame with extra-thick-walled tubing.

“When you get this bike on paper and see a standover height north of a meter, it’s like, wait a minute … is that right?” Christensen said. It also had a wheelbase well over 1 400mm, and an effective top tube at 75.9cm. “You know it’s going to be big, but you’re not ready to see those numbers.”

After finishing the frame design, Christensen gave basic specs and general ideas to companies that manufacture components Thomson couldn’t make in-house, and let them take creative liberties from there.

“One of the main parameters for the handlebar was to have a grip with a 31.8mm diameter, just because of the sheer size of Shaq’s hands,” Christensen said. “If we were to use standard mountain bike bars for him, that would be like you or me holding onto a pencil and trying to control a bicycle.”

In order to mount standard shift and brake levers to this size of a handlebar, the folks who built the handlebar at Oddity Cycles opted to used two standard-thickness bars in the center (instead one big one) to help maintain stiffness while accommodating lever mounts.

Surprisingly, the 36-spoke rims are one of the few not-custom items on the bike. Christensen, who rides a unicycle on occasion (mostly to make his daughter laugh, he says), knew they could find premade 36-inch rims, because that’s the size of the one on his unicycle.

“I figured if one of those can handle one guy, if we get two of them under Shaq we should be in good shape,” he said. Once they had them though, the wheel builder had to search to find someone with a spoke machine to cut and lace all the extra-long spokes. 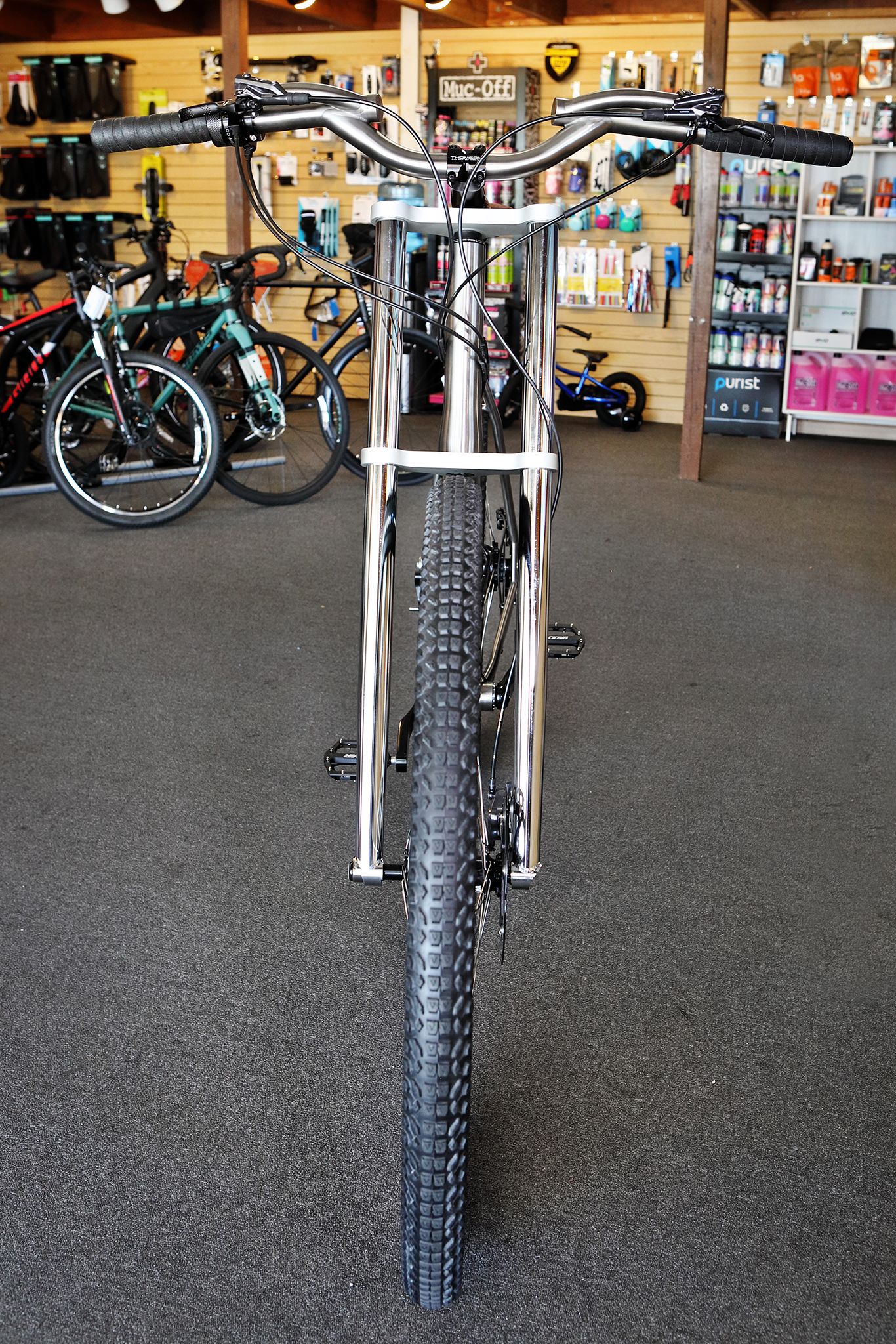 Designing the fork was one of the trickiest parts. Axle to crown, the dual crown cro-moly fork with 38mm stanchions measures 490mm and is spaced for a 15 x 150mm axle. Industry nine created a custom 150mm hub to accommodate the 36-hole rims and the width of this hefty fork.

To make the 220mm cranks was a challenge, Christensen said, in order to come up with a way to forge the right size and shape that would work and be light enough.

Perhaps almost as much fun as Shaq is going to have cruising around on a bike built just for him.