Meet Your Next Big Bike Adventure – Joburg to Blouberg.

Is the Massive Adventures 1 000 Miler - Joburg to Blouberg - the ultimate cycling road trip? Simon Rollo went to find out, and smoked it.

Road trips are a happy by-product of the massive distances that separate pockets of [relative] civilisation in South Africa. The Joburg to Blouberg 1 000 Mile Challenge takes advantage of a backroad version of one of the classics, taking brave riders from the City of Gold to the shadow of Table Mountain on a set route of 1 600km between the Riviera Resort near Three Rivers, just south of Jozi, to Eden on the Bay, Blouberg. 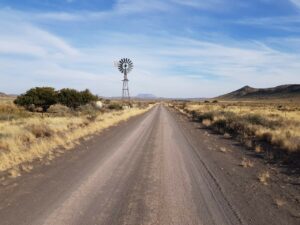 In its purest form, the challenge is 100% unsupported and can be ridden at any time and from either end of the route, according to a simple set of unsupported rules. It is not an event, but a challenge, where riders take full responsibility for their own logistics, with no following vehicles or other support beyond what is freely available to any other traveller. If that sounds too much of a challenge, the route is fully open-source, ready to be ridden however you want (just have fun doing it), with frineds, backup, following vehicles, on an ebike, solo, in a group… go mad! 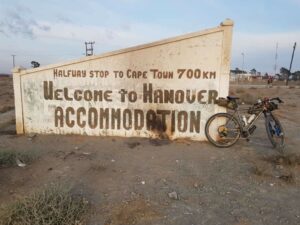 It was in this self-supported guise that Paul Erasmus and John Loos ‘broke in’ the new route in April 2021, in 7 days 8 hours and 39 minutes. That inaugural time was never going to stand as the record for long, and indeed in June, Simon ‘The Richards Bay Express’ Rollo travelled to the Highveld with a far more serious agenda.

READ MORE Build Your Endurance With Effective Base Miles

He left Riviera Resort, Three Rivers, at 4 am on Saturday June 12 2021, and high-tailed it down the predominantly gravel route to Winburg for a first sleep that evening. At this time of year, the prevailing winds are often more from the west, and indeed he started with a stiff headwind. The headwind had a significant impact on his plan, with Plan A having been to get to the Town Lodge at Bloemfontein Airport (a shade over 400km) before 23h00 curfew. But a delayed arrival in Winburg, after 18h00, made that impossible, and Winburg Guest House at the 286km mark on the route was the site of the first sleep.

Simon’s second day was properly epic, leaving Winburg in the early hours of Day 2 for a 394 km push to Colesberg via Gariep Dam. Such a distance is particularly impressive when the bulk of the route is gravel. The day wasn’t without drama, when Simon battled with his electronic gear shifters in Bloemfontein, causing a delay of around 90 minutes. Sundays in Bloemfontein are more serious affairs than in the bigger metros, and bike shops are closed for the day. The unsupported rules do allow a rider to make use of commercial services along the route that are available to all (barring commercial transport services, just before someone gets any clever ideas). Fortunately Simon was able to figure out the problem, and the chase continued. This does beg the question as to how hi-tech you should go with your equipment on an unsupported challenge, where you may be required to fix it yourself? Self sufficiency on the Joburg to Blouberg is key, because apart from Bloemfontein from Monday to Saturday, you won’t be finding much in the way of bike shops anywhere else along the route. 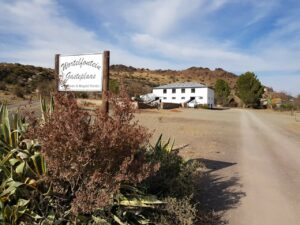 Simon rolled into Colesberg’s Merino Inn, via the adjacent KFC, for a well-earned rest after a 21 hour day on the road.

A relatively gentle meander along the quiet gravel roads to the west of the N1 proved a far more relaxed option as day three dawned (Simon’s habit is to tick of a block of the route before the sun finally does appear) on the third day of what was remaining an on-target five-dayer, coming back to the N1 at Hanover and Richmond for resupplies, before veering more sharply west to Victoria West. But a westerly headwind made it a very slow and short 243 km day to Victoria West for the third sleep.  Simon had hoped to reach Loxton on Day 3, almost 90km further down the track, but was not too disappointed with Victoria West, as it kept him on track for a Sutherland sleep on day 4. All the pre-ride planning showed that Sutherland, at the 1 216 km mark, was crucial to reach on Day 4 if Blouberg in sub-5 days was going to happen, and this was definitely still on the cards.

One of the big logistical challenges on the 1 000 Miler route is posed by small towns that close down almost entirely for the night. If you arrive late (in some cases late is 5 or 6pm…), best you’ve phoned ahead to book accommodation and food or you’re going to sleep out in the cold and go hungry. On Day 4, Simon ran into a slight variation of this challenge: he got to Loxton too early, after an early start from Victoria West, only to find the town still closed lock, stock and barrel. No breakfast, no resupplies, nothing. So, it was straight on to Fraserburg, nearly 100 km further on, for a lunch time resupply instead. Self-supported is not for the faint-hearted, nor the precision-planner. There would be a mild repeat when he made Sutherland for his fourth sleep at around 20h30, after a 291 km day from Victoria West which included headwinds at stages and rain from Fraserburg, with a slight scramble around town eventually finding suitable fodder.

Sutherland might be 400km from the sea, but Simon could smell Blouberg and in the early hours of Day 5 he headed out of town, down the Great Escarpment via the deeply rutted Ouberg Pass Road, and into the Tankwa Karoo. The logistical challenges weren’t quite over yet: having not had breakfast in Sutherland due to a very early start, Simon had placed his hopes on the Tankwa Padstal, the only shop in the Tankwa Karoo where you can buy food and water. Alas, Wednesday, as Simon would learn, is the day the Padstal is closed. Fortunately, a family driving by in a camper van had stopped and kindly offered to make him a few sandwiches to tide him over until Ceres. But Ceres was a full 250 km from Sutherland, so without proper food supplies the day became long. But all’s well that ends well, and Simon pulled into Ceres for a welcome dinner at the local KFC just after dark. 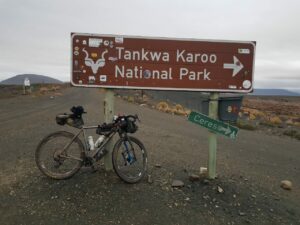 Nothing was going to stop him now, and the sub-5 day time, for which he needed to be at Blouberg by 4am, latest, was firmly within his reach as he pulled out of Ceres, KFCed up for the last leg of an epic adventure. The route goes via Gouda, Riebeeck Kasteel and Malmesbury, approaching Blouberg via the cycle paths from Melkbosstrand. 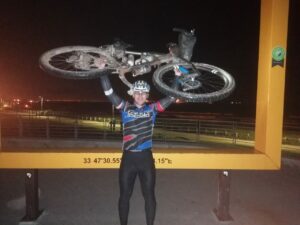 At 02h08 on Thursday, 17 June 2021, Simon rode into Eden on the Bay for a time of 4 days 22 hours and 8 minutes, after a 23 hour day on the road. This time now become the benchmark for the racing snakes, a record for others to come and have a shot at. 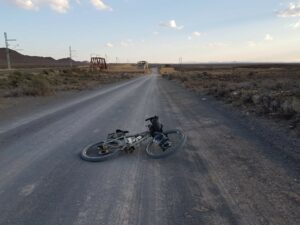 Or not. Far more sensible, for us mortals, is a seven to ten-day trip down the quiet back roads across four provinces, soaking up the endless scenery, warm hospitality and sublime silence South Africa offers travellers of all abilities. Drop in to the 1 000 Miler website, and plan an adventure that will change your life, for the better.

The daily videos of Simon’s epic ride, essential viewing if you want an idea of what you are in for, are here.