Why Bike Commuting is Good for You

Massive study finds cyclists and other active commuters experience dramatically lower risk of dying - from any cause - than those who drive or take public transit.

Massive study finds cyclists and other active commuters experience dramatically lower risk of dying – from any cause – than those who drive or take public transit. – By Selene Yeager 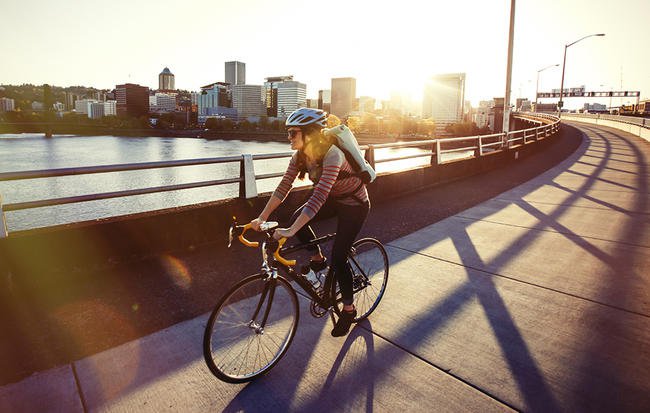 Just in time for National Bike to Work Week (May 15 to 19 this year), a team of researchers from Glasgow University in Scotland found that people who bike to work slash their risk of dying from any cause by a whopping 41 per cent, relative to those who drive or take public transit.RELATED: How Getting Over a Cold Can Give You a Heart Attack
The five-year study of more than 260,000 commuters in the UK found that among the commuters—half men, half women, with an average age of 53 – those who rode their bike to work also lowered their risk of heart disease by 46 per cent and their risk of cancer by 45 per cent.Though longer bike commutes bestowed the greatest benefits upon study subjects, even short jaunts across town appeared to help beat disease. On average, the bike commuters reported riding about 50km a week – 10km a day, round trip. Even those who combined public transportation and cycling (such as taking the bus or train part way) enjoyed a 24 per cent decreased risk of premature death from any cause.Even if your commute is too long to do by bike alone, consider using your bike to run errands whenever you can.RELATED: 7 Reasons Why Cycling is Better Than Running