How to Deal With a Clavicle Fracture (Broken Collarbone)

The experts will tell you there are two types of cyclist - those who have broken a collarbone, and those who are going to...

If you’ve been riding for a while, you or someone you know has likely incurred a broken collarbone in the course of a crash.

“I love biking and unfortunately, the collarbone is the most frequently broken bone in the body, and it is a frequent injury in bicyclists who fall,” says Jordan Metzl, M.D., a sports medicine physician at the Hospital of Special Surgery in New York City and an avid cyclist—though he’s been lucky enough to have never broken his.

This has to do with the way cyclists tend to fall, explains Brian Cunningham, M.D., a Minnesota-based orthopaedic trauma surgeon. “When you fall directly onto your shoulder, your clavicle [or collarbone]—which has an s-shape—compresses and is prone to breaking.” Metzl agrees and says it happens most often when cyclists fall to the side, like when your wheels slip out from under you.

The big issue with this break is that if it heals right, it won’t impair your long-term function—but that doesn’t always happen, and the repercussions can extend beyond your collarbone. The collarbone acts as a strut connecting your shoulder joint to your sternum in your chest, Metzl says; any kink in that system could mean you’ll have prolonged problems.

“If it heals in a position where there’s shortness [meaning it doesn’t quite reach the shoulder joint], there may be some weakness,” says Cunningham.

Here’s what you need to know about managing a collarbone break, and how to come back stronger. 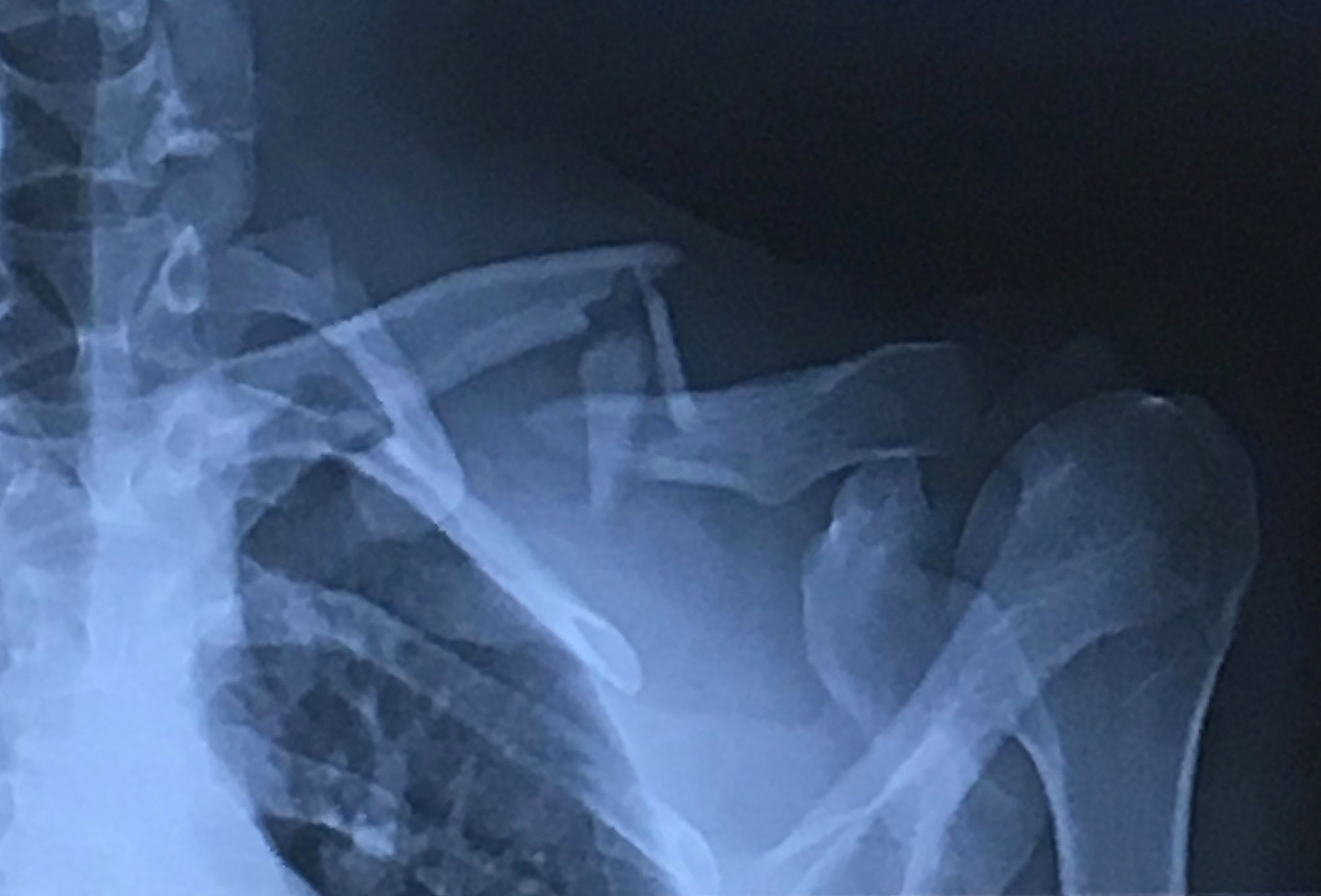 Signs You May Have a Broken Collarbone

You’ll know you’ve broken your collarbone almost immediately, says Subir Jossan, M.D., an orthopedic surgeon at The Centers for Advanced Orthopaedics in Washington D.C. It’s not a subtle injury—moving your arm will be agonising, and you may hear an audible crack as you hit the ground.

“It looks like the bone is actually shortened or the skin is tenting up,” Metzl says, if you have what’s known as a ‘displaced’ collarbone fracture. “Generally, people know when they have a collarbone fracture because it hurts like crazy right where they touch the collarbone.”

Don’t consider a broken collarbone a death sentence to your riding. Cunningham says that you’ll likely be able to get back to riding quickly

What to Do Just After a Break

If you suspect you’ve broken your clavicle, Jossan and Metzl say you need to head immediately to your local emergency room or urgent care center. It’s not that the bone needs to be reset right at that moment, Jossan says, but that “there are some big, important blood vessels around the clavicle that could have been damaged.”

“Don’t try to keep riding,” Metzl says. “Stop your ride and get it checked out because the risk is a more serious injury, you can’t protect yourself, and you can take a non-displaced fracture and turn it into a displaced fracture.”

How to Treat a Broken Collarbone

You will typically have two options for treatment: an arm sling or surgery. Once X-rays are done, the severity of the fracture will determine the course of treatment. Full recovery generally takes six to eight weeks, according to Metzl.

•A sling: A tiny, hairline fracture is a pretty simple fix. Usually, the doctor will put the arm corresponding to the break in a sling and tell you to come back in six weeks.

•The surgical option: If there’s any sort of displacement—meaning part of the bone has shifted—things get more complicated, and you may need surgery.

“The pendulum has swung from staying away from non-operative treatment to opting for surgery in certain situations,” says Cunningham, adding that several recent studies have shown that those who opt for surgery have better function and quicker recovery times. In fact, patients can use their arms the day after surgery in many cases.

“Any of these [collarbone breaks] that are shortened or displaced generally are treated surgically these days, which is a bit of a difference in times past,” Metzl adds.

Collarbone surgery entails placing a small plate over the fracture. In about 10 percent of cases, the plate may have to be taken out later; this is especially common in women who report irritation with purse or bra straps rubbing over the area above the plate. In cases where the cyclist has also sustained some sort of leg damage, the surgery can be helpful, since your shoulders can tolerate crutches the next day.

If you don’t get surgery but the collarbone break isn’t healing properly, you may endure six to eight weeks of mild discomfort only to find out that you have to have surgery anyway. But that doesn’t mean you can opt for surgery in every case. “The surgery route is really reserved for fractures that are displaced,” Metzl says.

In the course of post-break recovery, many cyclists notice a collarbone “bump”—a bit of callus where the bone heals, says Jossan. Whether you end up with one is somewhat determined by random chance, but if you don’t have much in the way of body fat, whatever bump you get will be much more noticeable.

Don’t consider a broken collarbone a death sentence to your riding. Cunningham says that you’ll likely be able to get back to riding quickly. With surgery, you could even be back in the saddle in just a few days. Without it, you may be stuck on a trainer for at least six weeks. “Honestly, this is a really sucky injury for cyclists,” Metzl says, but above all, you absolutely need approval from your doctor before hopping on your bike again.

Prevention largely has to do with being a good—and smart—rider, Metzl says, though sometimes you just get unlucky. “Preventing this injury is all about good luck, number one, being very careful on the road, and not riding in inclement weather,” he says. For example, don’t ride right after it starts raining, since the roads will be oily and the most slippery then.

Aside from luck, it’s wise to take this particular cycling injury seriously. “If it doesn’t heal right, some fall may break it again,” says Jossan. And it’s best not to underestimate a collarbone break.

“Many cyclists have had these injuries, and so anytime you have an injury that a lot of people have had, people can minimise it or act like it’s not that big of a deal—but the lungs are right near the collarbone, there are blood vessels near the collarbone,” Metzl points out. Every collarbone is different, too. “Don’t think it’s just a routine injury. It’s a serious one that needs to be checked out by a doctor,” he says.

Still, as long as everything heals properly, a collarbone fracture shouldn’t increase your chances of getting another down the road. “If it heals right, it’s like it never broke,” says Jossan.