Iliac artery endofibrosis is quite a mouthful, and no longer the preserve of elite cyclists, as more 'regular Joes' are (finally) being correctly diagnosed.

Janine Newman
Iliac artery endofibrosis is quite the mouthful, and no longer the preserve of elite cyclists. Janine Newman crossed the finish line at Ironman Florida this November with tired legs and a huge smile. Though it was her fifth time taking on the grueling event, it was the first time she’d done it pain-free.

When Newman, now 47, was training for her first Ironman in 2010, the Pilates instructor and triathlon coach from Wauconda, Illinois, tried to ignore the occasional pain she experienced in her right leg while biking or running. “Am I dehydrated? Did I not eat well?” she’d wonder. “It felt like my leg was filling with blood and there was nowhere for it to go.”

She was diagnosed with iliac artery endofibrosis, a condition caused by narrowing and/or kinking of the iliac artery, which restricts blood flow to the affected leg.

Newman saw multiple specialists, including an orthopedic surgeon, a neurologist, two physical therapists, and a physiatrist, before finding a vascular surgeon who gave her an accurate diagnosis more than a year after her mysterious symptoms appeared.

Newman’s experience is not unique. According to a 2016 study in the journal Canadian Family Physician, iliac artery endofibrosis is often overlooked in fit people, who are considered low-risk for vascular blockages. According to Jason Lee, M.D., a vascular surgeon at the Stanford University Medical Center, these issues usually stem from conditions like diabetes, a history of smoking, or heart problems. He and his colleagues joke that a cyclist being treated for iliac artery endofibrosis is “probably the fittest person in the hospital that day.”

Unlike the majority of patients with vascular problems arising from health conditions, cyclists can develop iliac artery endofibrosis because of the high-volume, repetitive hip flexion. Over time, it may cause damage to the inner layer of the iliac artery wall at a point adjacent to the iliopsoas muscle, a major hip flexor, according to Lee.

He and his colleagues joke that a cyclist being treated for iliac artery endofibrosis is “probably the fittest person in the hospital that day.”

Symptoms appear when arterial thickening compromises blood flow, particularly during exertion. Hallmarks of the diagnosis in cyclists include loss of power (especially on climbs), early fatigue, and an obvious difference between the two legs, Lee says.

While Newman experienced the telltale pain and weakness only in her right leg, her symptoms were not always consistent. When her physical therapist suggested she consult a physiatrist, she initially misunderstood. “I thought she said ‘psychiatrist.’ [I thought] ‘she thinks I’m crazy,’ because my symptoms would go from my quad to my inner thigh to my calf to my hip.”

If you have pain, weakness, and power loss affecting one leg, find a vascular surgeon who has experience treating cyclists. (The Facebook group Cyclist’s Iliac Syndrome is an excellent resource). Lee’s Stanford clinic has a dedicated bike on a trainer for vascular cycling ultrasounds. After warming up, patients increase their power by 50 watts every three minutes until they can no longer tolerate the workload. Ultrasound and Doppler technology then measure blood flow. If patients test positive for loss of blood flow in the affected leg and show a slowdown in the return to normal blood flow, they undergo a CT scan in a cycling position.

“They’re lying on their back as if they’re doing a bicycle up in the air,” Lee says. (Unfortunately, it doesn’t count as a core workout—it only takes about 45 seconds to get the image.)

If you think you have symptoms, Lee does not recommend riding through the pain. He’s seen a few extreme cases where the artery was so damaged and narrowed that “the entire blood vessel closed down and then it turned into a limb-threatening emergency.” At that point the leg turns white, you can lose sensation, and you can’t walk. Lee says your only option is often the local emergency room and likely emergency surgery by the on-call surgeon, who “may not have ever heard of [iliac artery endofibrosis].”

“I thought she said ‘psychiatrist.’ [I thought] ‘she thinks I’m crazy,’ because my symptoms would go from my quad to my inner thigh to my calf to my hip.”

Cyclists with iliac artery endofibrosis symptoms are often worked up for other issues related to biomechanics and positioning, but if iliac artery narrowing is identified, Lee says surgery is “probably the best option” besides quitting cycling altogether (shudder).

Lee describes two surgical approaches: the bypass, and the endarterectomy and patch. Both aim to increase blood flow and are performed in about 90 minutes while you’re under general anesthesia. With a bypass, the surgeon attaches either one of the patient’s own veins or a synthetic tube to the area near the blockage so that blood can flow around the blockage. With an endarterectomy and patch, the surgeon creates a longitudinal slit in the blocked artery to increase volume and sews a synthetic or vein “patch” over it to increase surface area. While the techniques aren’t groundbreaking, says Lee, “it’s radical because it’s in an otherwise healthy person.”

Generally, you’ll stay in the hospital for one night. Lee asks his patients to restrict their activity to walking for the first month, increase to jogging or the elliptical during weeks five through eight, and try cycling two months after surgery. While the procedure doesn’t have a 100-percent success rate (a study in The Lancet reported 87 percent of cyclists returned to their previous fitness level after surgery, while about 75 percent of Stanford’s patients return to their previous peak level of cycling), Lee has had “a lot of grateful patients.” Many share pictures of themselves at the finish line or on the podium—over the years he’s amassed “a ton” of photos of smiling athletes. 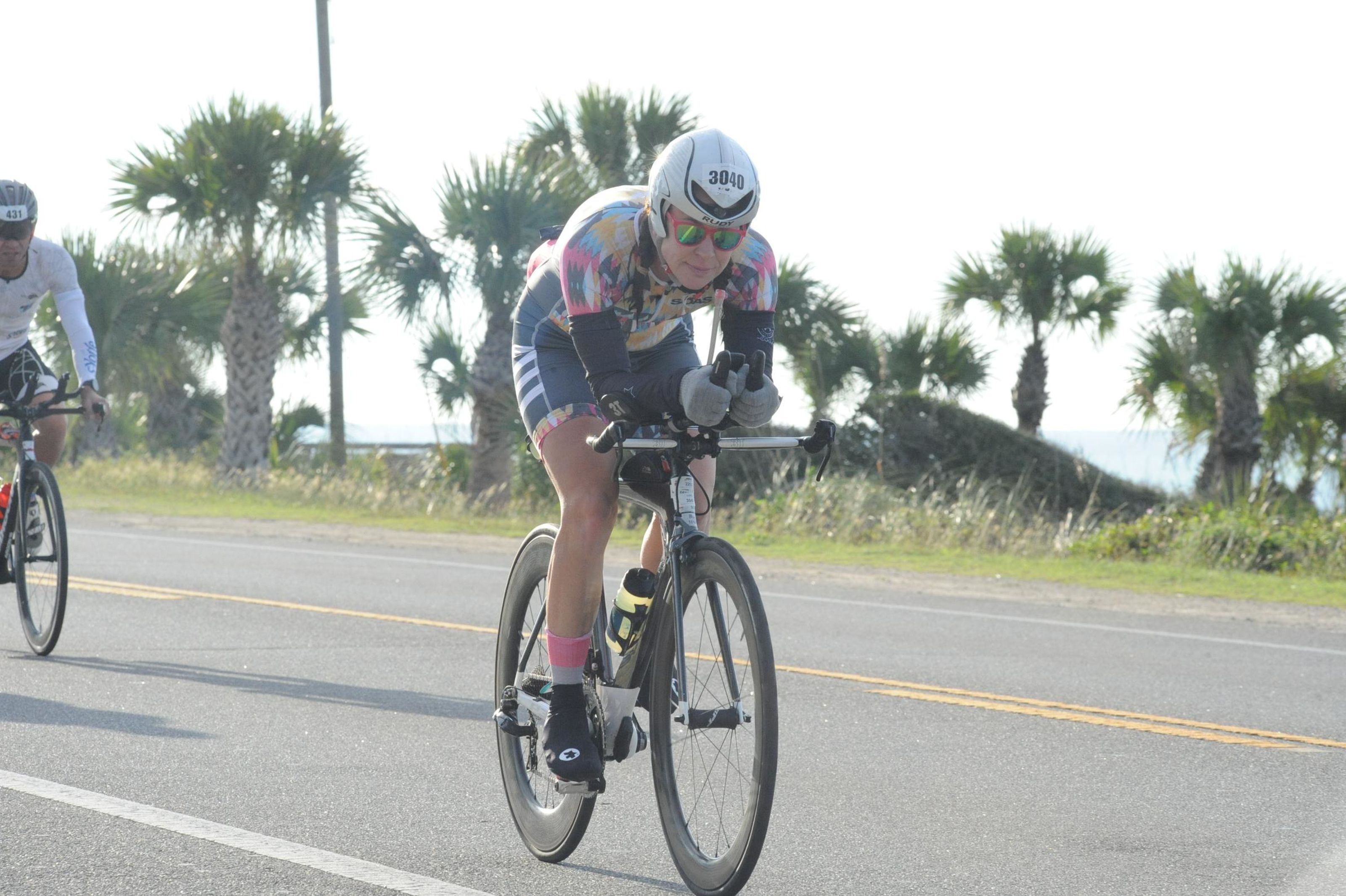 In Newman’s case, surgery was effective—eventually. Following her first surgery, she recovered, regained fitness, completed an Ironman, then experienced symptoms again and needed surgery about a year later. She repeated this cycle every year until her last surgery, which was in 2017. At that point, her surgeon realized her artery was too long, so he trimmed it and she’s been symptom-free ever since.

Of her most recent Ironman, Newman says that while she always expects “highs and lows” over a 28okm race, this time, racing with a renewed sense of gratitude for her health, “there weren’t any lows.”