Saddle Sores: What Causes Them, How To Treat Them

Long rides in warm weather can often lead to saddle sores. Here’s what you can do when they show up.

Chafing and saddle sores can happen even if you have a perfect saddle and bike fit, especially if you put in long rides in hot weather. Your bike saddle, shorts, and the salt crystals from dried sweat can work together like fine sandpaper on your butt while you pedal. It’s even worse if it’s humid or raining, because wet skin is particularly vulnerable to chafing.

Often, you don’t even realise you’re rubbing yourself raw down there until you get off the bike and hit the shower (where you find out immediately). Sometimes, saddles sores can also seem to appear out of nowhere. You might notice a little skin irritation, and then bacteria take over and suddenly you have inflamed hair follicles. Left untreated, they can develop into infected boils and oozing abscesses. Not pretty, and really painful.

If the sore is significant enough that it hurts when you sit on it, take a few days off from the bike and keep the affected area clean and dry. Diaper rash and antibiotic creams can soothe the pain and speed up healing. Infected sores require a trip to the doctor and prescription antibiotics, says Gloria Cohen, MD, a former physician for the Canadian national and Olympic cycling teams.

An Ounce of Prevention…

To prevent a recurrence, take a few measures to remove all friction points with that sensitive skin. Invest in shorts with a seamless chamois, wash them between rides, and never sit around in your sweaty shorts for longer than absolutely necessary.

Get out of your shorts as soon as the ride ends and at least towel off. And remember: No underwear with bike shorts. I’m shocked by how many events I go to where I can spot underwear lines. It’s really just asking for trouble.

Also consider using chamois cream, which is a lubricant that goes between you and your chamois to reduce friction. Many contain lavender, eucalyptus, tea tree oil, aloe, witch hazel, and other natural antibacterial agents that help ward off infections before they begin. Some are creamy in texture, while others are waxy (I’ve found the waxy ones to be better in really humid, sweaty, wet conditions).

Ultimately, the type you choose is a matter of personal preference. Whichever type it is, apply it in liberal amounts. Start with a tablespoon-size dab and slather it on wherever your body meets your chamois. No need to rub it in. If I know I’m going to be out for a long ride in wet conditions, I’ll also smear a light coating on the chamois itself for double protection.

Stock up on chamois cream and never go numb again! 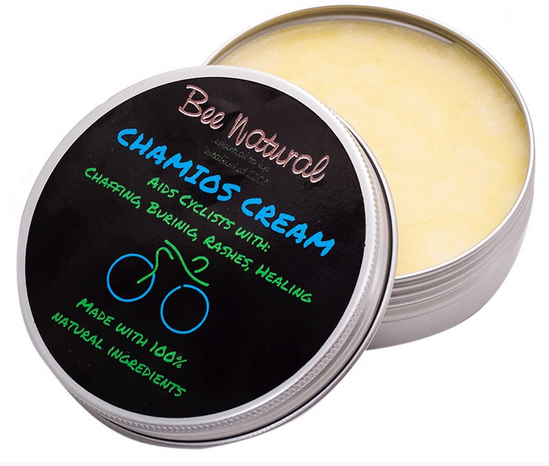