Tattoos May Mess With Your Sweat Rate

Getting ink permanently damages your skin’s sweat glands, according to a new study.

Getting ink permanently damages your skin’s sweat glands, according to a new study. – By Selene Yeager 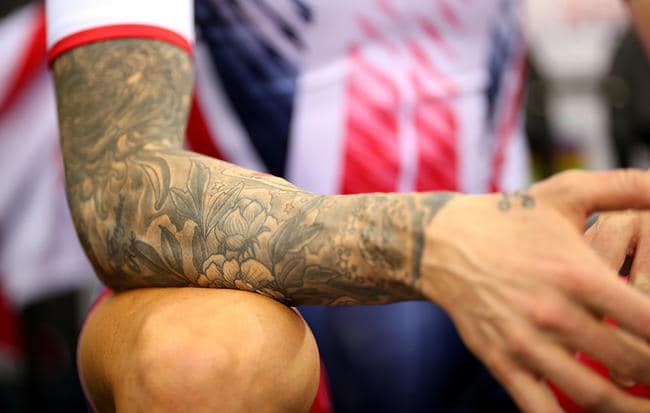 Sure, that elaborate sleeve of tribal symbols, chain rings, and flames may look fierce when you’re head down and guns blazing toward a sprint finish. But researchers are now questioning if tattoo ink may also interfere with your skin’s natural cooling mechanism—namely sweat.Here’s why they’re taking a closer look: Tattoo needles work by permanently depositing ink into the dermis layer of the skin, which is composed of collagen fibres, nerves, blood vessels and glands that include your eccrine sweat glands. These glands are what your body uses to produce sweat that springs out of your pores to deposit on your skin, where it will be evaporated to cool you down. Recently, researchers at Alma College in Michigan found that all that needling and the inflammation it causes seems to leave behind lasting damage along with a permanent piece of artwork.
In the study, the scientists tested 10 volunteers who had tattoos on one side of their body, but not the other. They then applied special sweat collection discs, which stimulate, collect and analyse the composition of the sweat over the tattooed skin and the non-tattooed skin on the same place on the opposite side of the body. The results were pretty dramatic.

RELATED: 5 Reasons Sweat Is Your Best Friend on the Bike

The big question is if this translates into any sort of overheating or electrolyte imbalances on the bike. Lead researcher Maurie Luetkemeier, PhD, says there are many questions that are left to be answered. The sweat glands may act differently when you’re stimulating them naturally by increasing your body temperature with exercise rather than when they’re chemically stimulated in the lab. Even if they still don’t sweat as well, how much ink would you need to have to run into trouble? “We would suspect that the greater area of tattooed skin, the more potential problems,” says Luetkemeier, noting that more research is needed to be sure. “Not all areas of skin are equally endowed with sweat glands, so there could be some regional differences as well.”