So: should you give up the ease of those clippers, or is waxing your legs really better? Dino Lloyd got the root of the problem and didn’t scream once.

“Bicycling is in Cape Town, so it’s a bit far for us. But Dino, our gear ed, is currently based in Joburg – and he would be perfect for taking on a story about leg waxing.”

When I read this, my eyes pre-emptively teared up; although outwardly, via email, I jokingly acknowledged our editor’s suggestion with a quip about once having tried leg waxing as a precursor to watching the movie The 40-Year-Old Virgin – that would be the waxing scene, not the virgin part (Yeah, right! – Ed) – while at the same time affirming the consensus that it’s best to rely on electric trimmers to keep our pins primed and follicle-free.

Meghan, our waxing contact and Director of First Impressions at Naked Cherry, a leg-waxing and skincare clinic in Johannesburg, came up with the idea after reading an article in Bicycling on Viagra as a performance-enhancing drug (PED). I still wasn’t sure how they were linked; but I decided to go with it, since Meghan sounded gentle.

Clichéd trepidations aside, we set up two appointments over two months, and Meghan provided guidance on the, er, procedure. There’s a helpful online guide to avoiding irritation and skin sensitivity, with some recommended Do’s and Don’ts – a shower before to cleanse and exfoliate the skin, avoiding caffeine beforehand if possible. I ignored the second tip, since I’m a cyclist and am unable to operate without a morning espresso.

There are a number of options, depending on how aero you want to go. The more usual choices are the Three-Quarter Leg, from mid-thigh to the toes, or the Full Leg, from the brief/bikini line to the toes.

Otherwise, if you’re feeling more adventurous and want to test your boundaries, there are options in the danger zone: the Twig & Berries: waxing of the shaft, scrotum and anus (bum cheeks not included, phew) or the MANifico Bikini: everything from front to back including pubic area, shaft, scrotum through to anus (minus bum cheeks again).

There are further options and varied pricing, but the first two are the most applicable here, so we opted for a balanced approach and went with the Full Leg.

On my arrival at the Naked Cherry premises in the northern suburbs of Joburg, Meghan introduced me to Soneni, my therapist. Who gave me a sense of ease immediately: Soneni has an impeccable bedside manner – she has an eight-year history in the industry, and has never lost a patient.

Then Soneni withdrew, allowing me to get comfortable in a private consulting room pristinely laid out with a comfortable bed and the appropriate tools of the trade. Honestly, I was struck by the level of hygienic prep and comfort. She returned shortly afterwards, and we made idle chit-chat while she prepped the muti for follicle removal – a purple mixture that looked rubbery, and nothing like the syrupy stuff I’d imagined. Proudly I managed to resist dipping my finger, or trying to taste the stuff.

As I lay back for the first wax strip, a memory popped up of a family dog I once had to take to the vet. Specifically, the moment he was propped up on the stainless steel surgery table, offering his jubilee regions to be shaved (à la Twig & Berries) before a catheter was inserted. I’m sorry, Max!

Zzzzzt… what? The first wax strip done, a grinning Soneni, and my bemused face. That really wasn’t bad at all – a slight sting, but riding in a Highveld rainstorm stings more. Rule five, yeah baby!

With any discomfort or awkwardness evaporated, Soneni and I chatted as she finished off the leg waxing with the practised ease of a Jedi, and left me to change back into civvies.

For a first session of anything it was actually a painless, hassle-free experience; and afterwards, Meghan covered some basics, dispelling the myths around leg waxing.

Is it really that painful?

“It really depends on the individual’s tolerance for pain, and anxiety about treatment. The hair Is being pulled from the root, after all – but the pain is manageable. I think a lot of male first-time waxees think that the sensation will be akin to, say, being kicked in the gonads; but with proper support (the skin being held taut) and pressure (the therapist pressing the just-waxed spot as soon as the strip is removed), the pain isn’t a sustained event and only stings for a second.

“The type of wax used can also make a difference. We use hot wax on sensitive areas because it never dries completely, and so remains pliable, which better grips the hairs, and means fewer repeat strips and a quicker treatment.

“For first-timers, we recommend taking something like a Panado half an hour before waxing to take the edge off, and also exfoliating – even just with a washcloth – before the treatment. The exfoliation removes dead skin cells so that the wax is more effective in fewer strips (and again, presents less opportunity for pain).” 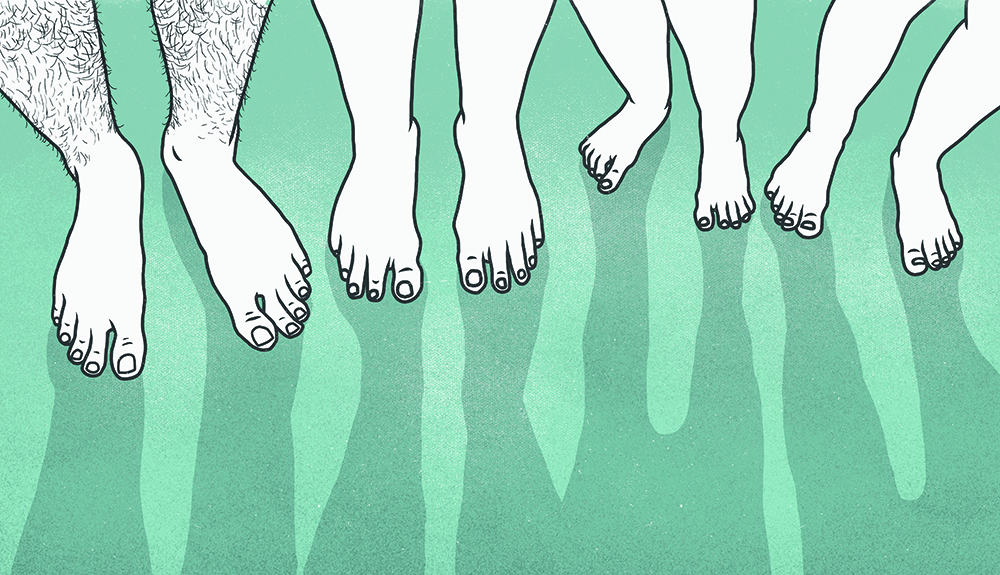 Doesn’t waxing give you ingrown hairs?

“Without proper home care, any form of depilation (hair removal) can cause ingrown hairs, which are the result of blocked follicles; the hair can’t escape and gets stuck under the surface of the skin.

Cyclists are especially prone to them, as you know, because of the combined sweat and pressure – basically a match made in hell, for skin health.

“A home-care regimen that keeps skin clean is key, with waxing or shaving. We recommend some combination of exfoliation and antiseptic treatment; the exfoliation removes dirt and oil, and the antiseptic (such as salycylic acid) dissolves whatever’s in the follicles. (We make a shower gel called Morning Glory that contains salycylic acid, so that there’s no extra step to remember day-to-day.)”

How do you care for your legs afterwards?

“Regardless of treatment, it’s important not to work out/cycle, tan, or swim in the first 24 hours after a wax. In fact, even a too-hot shower can irritate the skin, since the follicles and pores are open and so more vulnerable during that time. (This can also give rise to a histamine reaction many people mistake for ingrown hairs.) And only all-natural lotions or gels (like our Hooked on Hydration, which contains aloe, lavender, and rosemary) should be used during that time, as synthetic perfumes can inflame the skin.

“To those recommendations, especially for leg waxing, I would add drinking plenty of water, which keeps skin supple and increases the efficacy of subsequent waxing, because the hair is less likely to break off.

“Exfoliate every two to three days, use some kind of antiseptic/antimicrobial body wash every day, moisturise after showering, and drink plenty of water.”

How long does a wax last?

“The short answer is two to three weeks, with the hair typically being ready to wax again in four weeks. But because not all hair is on the same cycle, it can take two treatments for all of the hair to be waxed at the ideal time, which is when the hair hasn’t yet detached from its blood supply (the anagen phase).

“It’s gross to some people, but your therapist can actually look at your wax strip and determine if you’re waxing at the correct time in the hair-growth cycle; they look for a little black bulb, which is the root itself. (This is also why pinpoint bleeding can occur in first-time waxees; the root is detaching from the blood supply, and can bring some of that blood with it.) If you pluck your eyebrows, you’ve probably seen the dermal papilla that I’m talking about.”

What should you pay for a leg wax?

“I have to say that there’s no price tag on hygiene; and with waxing, typically, you get what you pay for. If you walk in and notice that the place is dirty, then assume their wax will be the same (and then run away!).

“Double-dipping wooden spatulas during treatments transfers sweat and fluid from one waxee to the next through the wax pot, so a good salon will never double-dip the spatula during an intimate or underarm treatment. Strip wax spatulas are metal and can be disinfected, so don’t need to be disposable, but if the therapist doesn’t wear gloves or change the bed cover between clients, then the hygiene breach remains.

I was pretty much sold on the idea of waxing over the pain of clippers.

My skin feels better, and is staying smoother longer; it’s better for massages, and more hygienic – better for cleaning and treating wounds from any crashes. Plus, I don’t need to worry about my neighbour popping round for some milk and catching me in the garden deforesting.

What I thought at first would be a novelty has actually won me over as an alternative to the old razor or clippers. And I didn’t expect that.