We are entering that time of year where thunder and lightning rain and wind bring us to sunset... here's how to stay safe!

Thunderbolts and lightning. Very, very frightening. But  should they be?

“One-crocoBANG“. Counting the seconds between the flash of lightning, and the clap of thunder, on an exposed ridge between Malealea and Roma, had suddenly become less than fun. In fact, perched on an aluminium mountain bike, or conductor, call it what you will, a more accurate description would be life-threatening. In 2012, Jakes Jakobsen and I were caught out on an exposed ridge riding the third stage of the Lesotho Sky stage race. “I would rather die in a blaze of glory than shiver to death” is roughly what I decided our team tactic would be to scurry to the relative safety of a village rondavel… but is that the right thing to do?

Here’s how you can stay as safe as you can when you get caught in a storm, as thunderbolts and lightning season hits South Africa, brought to you by the still-living editors of Bicycling.

Joe Lindsey survived a similar experience: “When the hair on the back of our necks began to stand up, we put the bikes down and ran downslope toward some scrub pine where we could shelter. It was Day 5 of a weeklong bike trip on the Colorado Trail, and as we were descending 3 800m Sargents Mesa, the weather came in hard. Cold, wind-driven rain dropped the air temperature from a pleasant 20-ish to a hypothermic four degrees in mere minutes. Lightning crackled all around us.

Our group of six, crouched separately and huddled in warmers and Gore-Tex, waited out the worst of the electrical storm. Once the rain began to lessen, we quickly got back on bikes and continued our descent. We got everything right—seek shelter, avoid grouping together in case of a strike, cover up to stay as dry as possible, and get moving again quickly to descend to safer terrain and generate body heat—except leaving the bikes. Metal, as it turns out, doesn’t actually attract lightning any more than any other positively charged object.

That’s one of countless storms I’ve been trapped in on a bike in 25 years of riding. Chances are, at some point during your riding life, you’ll get caught in them from time to time, too. Here’s how to handle it: 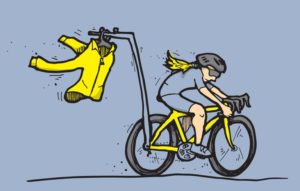 Sure, it’s a beautiful summer day without a hint of rain. If you’re going long, bring the jacket anyway, says Mike Curiak, a former ultra-distance rider and multi-time Iditabike winner. “You simply don’t leave the house without a rain shell,” he says. “If you do, you’re guaranteed to get hosed if it rains.” 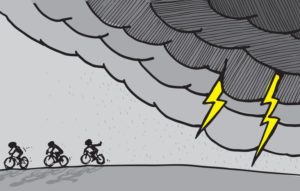 *most of the time, except in the case of lightning

If the main threat is getting wet, keep moving, says Yuri Hauswald, an ultra-distance mountain biker and former Dirty Kanza winner. “You probably don’t have a ton of extra layers with you, so you have to keep the blood flowing,” he says. The exception: If there’s a threat of lightning, you need to find what shelter you can, as low as possible. Shelter separately; if one of your group is struck, the others will still be OK and can provide aid. If the storm is bad and your route leads higher, consider a retreat. Do not split up when moving. Your group should move at the fastest possible pace of its slowest member. Keep an eye out for signs of hypothermia: confusion, drowsiness and lack of motor control. Shivering isn’t great, but it’s when someone stops shivering that real trouble is near. Use the gear below to try to retain body heat, keep moving to create warmth, and remember to eat and drink.

Stay warm in a storm: Bring the right stuff 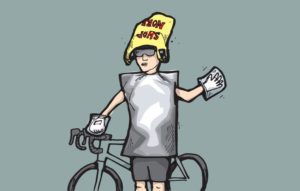 A rain shell is your absolute minimum here. If it has a hood, great; keeping your head dry and toasty is essential. But Rebecca Rusch has a few other items in her pack that have proven worth carrying over 20 years of long-distance adventure racing. First, a space bag—that shiny, Mylar shell that rescue teams carry. They’re compact and lightweight. And yes, get the bag, specifically. “The space blanket is sort of ridiculous because it just flaps in the wind,” says Rusch. “The bag you can wear underneath your jacket to trap heat.” She also carries a disposable plastic shower cap and a pair of thin, disposable nitrile gloves (the kind you might wear while working on your bike to keep your hands clean). “They work as a vapour barrier liner,” she says. “You’ll be sweaty but warm, as long as you keep moving. But there’s no insulation so if you stop and it’s cold, you’ll get cold.” In a pinch, improvise. One year at the la Ruta de los Conquistadores race in Costa Rica, Rusch was caught in a bad storm and used a small plastic trash bag in place of a shower cap. 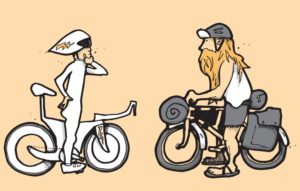 With a long career spanning everything from rock climbing to gravel riding, Rusch takes a different perspective than many cyclists. “The bike racer mentality is that ‘the course is marked, there’s neutral support, and someone will come help,’” she says. “I’m the opposite. I have the adventure-racer mentality, which is that you’re on your own. I assume the worst might happen, so I have extra stuff everywhere.” Like Rusch’s shower cap and gloves, that extra stuff doesn’t have to take up a lot of space or weigh a ton. But you’ll be glad you tucked them into a corner of your pack.

Looking for two-wheeled adventure? Here’s Alexandera Houchin’s take on it all…