Chris Froome, Naked and On a Bike

The four-time Tour de France winner looks comfortable in his own skin.

The four-time Tour de France winner looks comfortable in his own skin. – By Selene Yeager 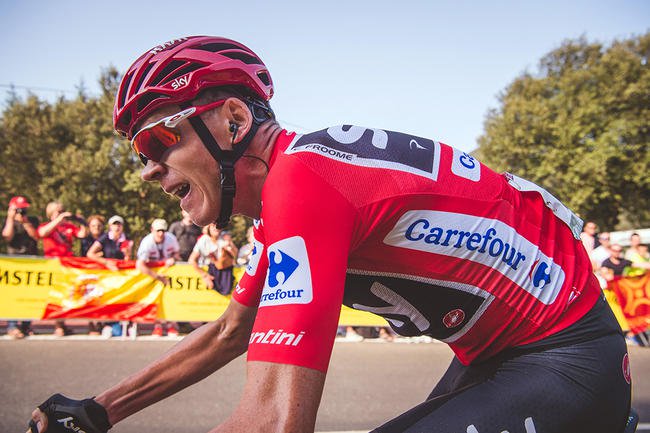 I’ll be the first to admit it: I’ve made more than my share of snarky remarks about Chris Froome’s sometimes-skeletal appearance. Heck, I’ve even apologised for it.Honestly, though, I still found the reports of him “starving himself”—his and his wife’s quoted words, not mine—before his Tour de France victories a little worrisome, given the prevalence of eating disorders in sport. (For the record, Froome says that once he learned how to cut carbs and thrive on a more protein-centric diet, he no longer starves himself to make racing weight.)A recent photo on Froome’s Instagram, showing him on his ruby red Pinarello wearing nothing but a big smile, has me reaching further into my suitcase of mea culpa. The photo is part of a series from photographer Marc Aspland called “My Sporting Body,” in which athletes pose in their birthday suits and dish a little on how they feel about what they see.Frankly, Froome looks healthy and happy, lean and chiseled, but hardly emaciated.

Of his body shape, Froome told The Times of London, “I can recognise the proportions are ridiculous. Skinny upper body, massive thighs – I do feel a bit ridiculous looking in the mirror. That’s what it takes, but I am looking forward to getting in the gym when I retire and doing some bicep curls, getting some shoulders to balance things out a little.”

It’s not a trick of the camera: Froome is actually a bit heavier than he was standing on the finish line on the Champs-Élysées earlier this year. Now, a couple of weeks after the Vuelta a España, he will have certainly put on a bit more weight as his body recovers and normalizes from the rigors of the season.

“As soon as a Tour is over, you’d expect him to put on another two to three kilograms,” says Hunter Allen, founder of the Peaks Coaching Group and co-author of Training & Racing with a Power Meter. What Allen finds more revealing in this already-revealing image is Froome’s enormous chest cavity. “He looks like a greyhound!” Allen says. “Look at that chest cavity and tell me that guy isn’t all lungs.”

It is pretty impressive to note how his expansive chest wall nearly brushes his bulging quads as he pedals out of the saddle in the shot. But it may be less surprising when you realise that Froome has an off-the-charts VO2 max (the maximum volume of oxygen an athlete can use) of 84 mL per kilogram a minute. By comparison, 54 mL per kilogram for a man his age would be considered “superior.” In elite cycling ranks, 70 mL per kilogram and above is generally the norm.

So kudos to Froome for putting himself out there. We look forward to what he’ll show us next.