5 Signs You’re Dehydrated & What To Do About It

If you wait to drink until you’re thirsty, you’re already too late.

Hydration seems really simple – just drink water when you’re thirsty, right? But the problem with proper hydration is that most people, especially those of us who work out regularly, are already dehydrated before they even start training.

“Dehydration occurs from inadequate water intake or excessive water loss, but most commonly both,” explains M. Ramin Modabber, M.D., the chief medical officer of the AMGEN Tour of California.

The average cyclist, especially if you like to ride first thing in the morning, is already working from a deficit the moment they start pedalling. In fact, “most people are one to two percent dehydrated just walking around,” says Doug Casa, Ph.D., Chief Executive Officer of The Korey Stringer Institute, which provides research on exertional heat stroke prevention. And if you’re dehydrated by even two percent of body weight, it will have a negative effect on your cognitive function, according to a recent meta-analysis of 33 studies published in the journal Medicine and Science in Sports and Exercise.

It’s not just your brain that suffers (although that should be a concern as we need our wits about us while navigating roads, traffic, and obstacles – in addition to our own performance); it’s everything from endurance and speed to balance.

“When we work out in warmer weather, our blood isn’t just shared between the heart and the muscles; it also has to be shared with the skin for the process of sweating,” Casa explains. “So you have less blood to carry oxygen and nutrients to your muscles, to get rid of waste products in your heart, and to maintain your cardiac output and keep your heart rate down, because a huge amount of that blood is now dedicated to helping you cool yourself.”

If you wait to drink until you’re thirsty, you’re already too late. Thirst kicks in when you’re about two percent dehydrated, but dehydration decreases cycling performance independently of thirst, according to additional research recently published in Medicine and Science in Sports and Exercise. And while certain factors like wind resistance can keep you from feeling less sweaty, they may also trick you into thinking you’re not losing as much water via sweat as you really are.

If you’re not pre-hydrating before you ride and rehydrating on the road, you run the risk of dealing with some serious side effects that could harm your performance and your health. Here are five signs of dehydration to watch out for – and how to deal.

1. Your Heart Is Racing

What’s going on: If you’re dehydrated on a ride, you might notice your heart rate spiking. “Dehydration causes a decrease in blood volume, which results in the thickening of the blood and a decrease in the the heart’s ability to supply fuel to our muscles,” says Modabber. “That means the heart has to work harder – hence the higher heart rate – to pump the same amount of fuel to our muscles.”

What to do about it: Rehydrating as soon as possible is key, she says. “But it’s important to note that oral rehydration involves more than simply drinking water,” he says. “Since we lose water and electrolytes, it’s optimal to replace both of these when managing clinical symptoms.” Adding an electrolyte-infused drink mix to your water bottle when things get tough can go a long way in bringing your fluid and electrolyte levels back to normal. If your heart rate is abnormally high, though, Modabber recommends decreasing your energy output until it calms down.

What’s going on: Your brain is 80 percent water, says Jennifer Williams, the in-house research scientist for Pedialyte, so even small changes in your hydration levels can cause symptoms like dizziness. “The loss of key electrolytes like sodium, potassium, and chloride can affect the messaging between the brain and muscle and nerve cells throughout the body, which can keep your brain from working optimally,” she explains. Plus, decreased blood volume reduces the amount of oxygen and other nutrients your organs – including your brain – receive, adds Shayne Gaffney, owner of GC Coaching and USA Cycling-certified coach, which can definitely lead to wooziness.

What to do about it: If you’re feeling dizzy or lightheaded while riding, the first thing to do is a no-brainer: “Stop immediately, as you risk crashing and doing serious damage to yourself,” Gaffney says. Then, prioritise your electrolytes. “When your body has an electrolyte imbalance, it doesn’t absorb fluids like it should,” says Williams. A solution with a balance of sugar and sodium can help you replenish fluids and electrolytes effectively and once you replace what’s been lost you should feel better, she says. But you shouldn’t wait for symptoms; hydrating while riding will maintain your fluid and electrolyte levels and prevent future dehydration, she adds. 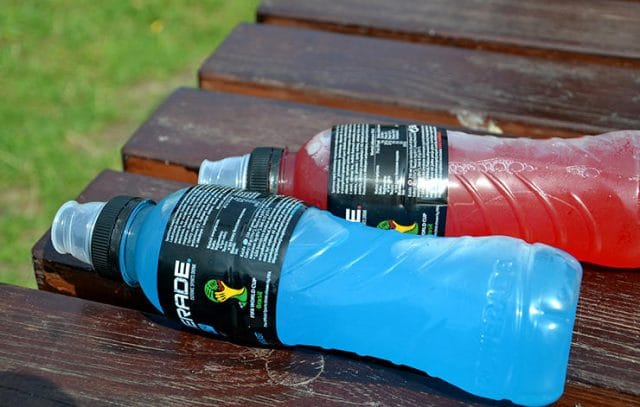 3. You Get a Pounding Headache

What’s going on: There are a lot of things that can cause headaches, but if you started your ride feeling good, didn’t drink much, and are now suffering from a headache, chances are dehydration is to blame. “Dehydration causes the brain to shrink and pull away from the cranium which causes the pain receptors in the membranes around your brain to become irritated,” says Shayne.

What to do about it: Surprise: Drink more. “The best way to alleviate a headache due to dehydration during a ride would be to rehydrate properly, and/or take an over-the-counter pain reliever,” says Williams. Dehydration headaches tend to feel like hangover headaches, so anyone who’s ever chugged a Pedialyte after a rough night out would be well served to try the same thing here. Another alternative is using a powdered oral rehydration solution like Rehidrate. And next time, make sure to hydrate before you saddle up, so any additional fluid loss doesn’t derail your ride.

4. Your Skin Looks Dry and Stiff

What’s going on: Your skin is about two-thirds water content, explains Modabber. “Since sweat production decreases during dehydration in an effort to retain fluid, body temperature rises,” he says. That can cause your skin to appear dry or less elastic (i.e. if you pinch yourself, the skin won’t snap back into place) as your body tries to direct water content to the vital organs versus less vital areas.

What to do about it: If your body is at the point where it’s redirecting fluids away from the skin, then you a) need to start immediately and frequently rehydrating. But this is also a sign that you really need to pay attention to pre-hydration. “Topping off the tank before endurance activities is often overlooked and is probably the single most important variable that an athlete can control,” Modabber says. “A common strategy is to begin drinking your favourite sugar/electrolyte solution 12 to ­24 hours before an endurance activity.”

5. Your Pee is an Alarming Colour (or Smell)

What’s going on: Your kidneys are really in charge of your hydration state – they can excrete water when you’ve had enough or hang on to it in times of early dehydration. “The colour and smell of urine come from the filtered waste products of the kidneys,” explains Gaffney. “As the body becomes dehydrated, and there’s less water to dilute the waste products, the urine excreted gradually becomes more concentrated and thus darker.”

What to do about it: This is something you can try to monitor during your ride, especially over the course of very long rides. “The colour of your urine should be clear or a very light straw colour. If you notice your urine is anything darker than clear or a very light straw colour, you aren’t drinking enough or you’re exercising too hard for the climate you’re in, and you need to adjust accordingly,” he says. The next time you take a pee break, you should see an improvement in the colour if you’re doing things right; otherwise, continue to adjust.
This article originally appeared on bicycling.com.