The Best Energising Foods For Cyclists

From pre-ride breakfasts to sweet indulgences, we asked nutrition experts to recommend healthy meals and snacks to fuel your day.

“These are staples for an endurance athlete,” says sports nutritionist Matt Fitzgerald, author of Racing Weight and Diet Cults. While eating different types and colours of fruits and veggies is the best way to ensure you get a variety of nutrients, you’ll still reap some benefits if you play favourites. “When people put [food recommendation] lists together, they may try to give you surprising foods or exotic foods because they don’t want it to be mundane,” says Fitzgerald. “But the problem is, eating is something you have to do three times a day every single day. There’s something to be said for foods that are functional and support athletic performance, but you want them to be familiar, affordable and accessible.”

It’s an admittedly unusual choice, but Jeanne Smith, RD, a nutritionist in the US, recommends “peanut butter and spinach sandwich on whole-wheat bread for breakfast”. If you can find whole-wheat bread with raisins it’s even better. Adding spinach to your peanut butter sandwich might not feel natural for you, but once you get used to the combination you can reap major benefits from it, she says. “You get carbs from the bread, green veggie with tons of nutrients from the spinach, and protein and fat from the peanut butter, which has staying power. This breakfast will keep you fuelled through a long ride, shouldn’t cause stomach issues and tastes delicious!”

If you can’t stomach the thought of greens mixed with your peanut butter, consider adding spinach to a breakfast smoothie. “Athlete or not, you should be eating more vegetables than anything else,” says Fitzgerald. “Spinach is a great staple because it’s so versatile. You can have it raw in salads or cooked on its own. It’s pretty much the only green that blends well: You can put it in smoothies without them tasting nasty.”

If you’ll be planting your butt on a desk chair, not a saddle, Smith recommends starting your day with plain, nonfat Greek yogurt with your own fruit and honey added. “Any fruit will do, but blueberries are especially nice for their antioxidant properties,” she says. “Greek yogurt is very high in protein and pretty portable. Adding your own sweetener lets you control those empty kilojoules”

“The purpose of a sports drink is to replace the fluid and electrolytes (primarily sodium) lost through sweat,” says Allen Lim, PhD, author of The Feed Zone. “This is critical to preventing dehydration during exercise and the resulting cardiovascular strain that can develop with even a small amount of water and sodium loss. Beyond water and sodium, adding a little bit of simple sugar can help facilitate the transport of water and sodium across the small intestine and also help to stabilise one’s blood sugar during hard exercise. Finally, a little bit of flavour can help to encourage more drinking. Unfortunately, too much sugar, flavour, and excess ingredients like preservatives, emulsifiers, colouring agents, and artificial sweeteners can impede the absorption of water and electrolytes.”

Lim recommends looking for a sports drink that has no more than a 4% concentration of sugar (4 grams per 100ml), at least 350mg of sodium per 500ml, and as few ingredients as possible. “But most importantly, use a drink that actually tastes good to you.”

Read: Six Things You Always Wanted to Know About Electrolytes (But Were Too Afraid to Ask) 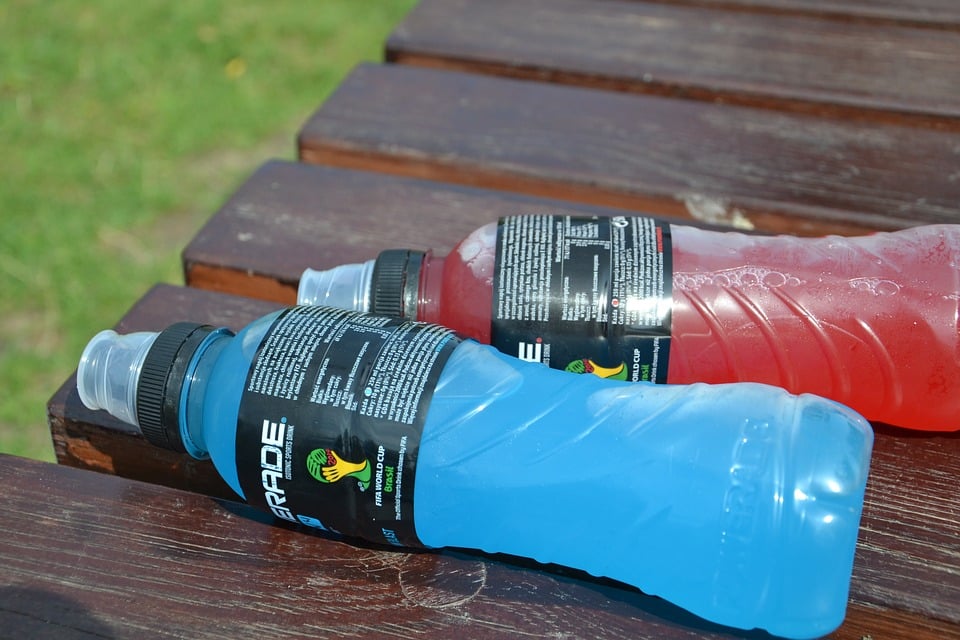 “There are a lot of reasons why real food on rides works better,” says Lim. “Solid food takes more time to digest in the stomach before it passes into the small intestine (aka gut), where it’s eventually absorbed into the body. If foodstuffs bypass the stomach at a much faster rate than they can be absorbed by the gut, the risk for gastrointestinal distress increases significantly since food becomes bottlenecked at the gut.” Plus, there’s the fact that real food often tastes better. “This does more than encourage us to eat,” says Lim. “It creates an emotional response that is actually vital to proper digestion.”

Read: 6 Recovery Foods To Help Repair Muscles After A Ride

“I have nothing against the potato – I have a whole chapter to its defense in Diet Cults,” Fitzgerald says. “But if I could only take one tuber to a desert island, it would be a sweet potato. It has lots of antioxidants, and is a little more nutritionally well-rounded than the white potato.”

Whichever spud you choose, try topping it with avocado instead of butter or sour cream. “Avocados are a great source of healthy fats. Like a lot of other fruits, they’re also full of vitamins, minerals, antioxidants [compounds that help repair muscle damage]…And they’re familiar, something most people like. They’re really versatile as well. You can have guacamole as a dip or condiment or add avocado to a salad — it just checks all the boxes.”

“Watermelon is great, and so is any food that has a high water content,” says Fitzgerald. “Fibre and water add volume without adding kilojoules.”

The ultimate evening meal? Toss together a massive salad with chicken or fish. “Protein is critical to get your amino acids that help in muscle recovery and repair after exercise,” says Diane Rigassio Radler, PhD, RD, an associate professor of nutrition at Rutgers University in New Jersey in the United States. “Chicken is great, just because it is easy and ubiquitous. Fatty fish, such as salmon, tuna, mackerel, herring, or sardines, delivers heart-healthy omega 3 fatty acids.”

“Tomatoes are high on my list,” says Fitzgerald. “They’re a decent source of carbohydrates, which cyclists obviously need, and rich in vitamins, minerals, antioxidants,” he says.

“Dark chocolate promotes healthy arteries, in moderation, and it’s rich in antioxidants,” says Fitzgerald. “Most people find it very satisfying in small amounts, and don’t feel compelled to eat a lot. I have a little square a day and that does it for me. It’s also a mood enhancer, which is nice!”

Looking for an adult beverage to enjoy with dessert? Pop open the Cabernet. “The health benefits of alcohol come from the alcohol, so anything with alcohol will provide the benefits,” Fitzgerald says. “But red wine has other nutrients as well.” Steer clear of mixed drinks, he says, which often have large amounts of added sugar.