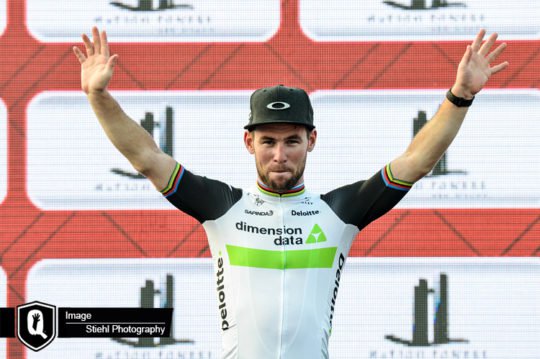 It’s within reach for the Manx Missile, who currently has 30 wins. However Cavendish has had a tough 2017, in which he suffered an overuse injury and then contracted Epstein Barr disease (glandular fever).

Because of this, many believe he can’t do it, but one does not simply write-off Cav. Here are five reasons why he can win enough stages to break this long standing record.

In Edvald Boasson Hagen, Bernhard Eisel and Reinhardt Janse Van Rensburg, Cavendish has a group of accomplished and capable lead-out men to set him up for sprints. This is without  mentioning Mark Renshaw, his longstanding lieutenant who has led him out on a hat full of Le Tour stage wins. Renshaw has been a key part of Cavendish’s success, and will be this year if he is going to break the record.

2. He’s Chomping At The Bit

He has been out of action since April and only started training again in mid-May, so you can bet he’s itching to get back to some stage winning. Add to that his ’emotional attachment’  to the Tour and the statement he made when Dimension Data announced the team saying, ‘I owe it to myself, the team, our sponsors and most importantly to the Tour itself – to give it my best and to put everything I have in to trying to help the team.’ It’s clear that he isn’t going to the Tour as a token, big-name selection.

3. He’s Under No Pressure

‘If I am being totally honest, had this not been the Tour de France we may have collectively taken a different approach with regards to my inclusion.’ Cavendish hasn’t had much racing time, and because of this, many have written him off for the 2017 edition. With that statement he himself is saying that he may not be 100%. But that also takes a weight of expectation off his shoulders, and allows him to go into the flat stages knowing he can win, but not having to prove that he still has it. This could be a secret weapon.

4. He’s Got The Pedigree

With nicknames like ‘The Manx Missile’ and the ‘Cannonball Cav,’ there is no question that Cavendish is fast. But he didn’t buy those names, he earned them by amassing 145 career wins, including Milan San Remo in 2009 and the Road World Championships in 2011 alongside his 30 Tour de France stage victories. He’s also accustomed to winning multiple stages at singular Tour de France races. His record included six in 2009, five in 2010 and 2011 and most recently four with Dimension Data in 2016.

5. There are seven stages he can win

Of the nine flat stages, seven are set up (and expected) to culminate in a bunch sprint. Cavendish needs five wins to break Merckx’s record, and with the above factors and these ample opportunities, he has a great chance to break that 42-year record.

Here are the seven stages Cavendish can win, and the challenges that stand in his way of doing it.

The name Liege conjures up images of puncheurs powering there way through hilly terrain, on to victory. But in this case most of the stage takes place in Germany, and is as flat as a pancake. This gives Cavendish a strong chance of participating in a bunch sprint if his team can control the peloton during the mild undulations that occur as the race eventually goes through Liege to the finish.

Besides the odd bump here and there this one is flat. And barring a few customary attacks, the bunch should stay together for most of the way. The final third of the stage could be marred by winds. It would be a good idea for Cavendish to seek protection should this be the case, and stay close to his team and main lead-out man Mark Renshaw in the process.

Duly flat, and with roughly two thirds of it being on a slight downward trajectory, this one should be fast and action packed. The tricky part is that every other team with a sprinter and ambitions of a stage win will be gearing for the win. One positive for Cavendish is that he, Boasson Hagen and Renshaw have all been through this before.

If Cavendish took the win at stage 6, there would be plenty of pissed off sprinters out for revenge. And they could use every obstacle this stage throws out against him. Going steadily uphill for just over half of the way, it then dips in and out of a hilly section before going into a potentially windy final 40km. It’ll be a battle, but if the team rides smart, they’ll get their star sprinter into a bunch sprint with legs to spare.

After a rest day this traditional sprinters stage should prove simple enough for Dimension Data. The peloton will be mostly together throughout, until the final stretch when the pretenders give way and the sprinters come into play. Timing the lead out will be important. We know who’s best at that.

With the Pyrenees approaching, the climbers will save their energy and the sprinters will be relishing their chances before the long slog over the mountain range. It’s steadily uphill, if only slightly, but a smartly timed break could be profitable. Dimension Data would want to avoid this, and bring Cavendish into contention for the bunch sprint.

After riding through both the Pyrenees and the Alps, the remaining sprinters will be raring to go in the traditional final hurrah of the Tour de France. Whether they’re on weary legs or not, it’s always a matter of pride to stand at the top of the podium on the Champs-Élysées. Cavendish has done it here before, and if he’s still at the Tour at this late stage, it’s a great chance for him to do it again.