Until now, KZN has been SA’s international hub for the MTB World Cup – but in March this year, that all changes. Say hello to the world-class Stellenbosch XCO course...

After years of racing around the mythical forests of Cascades in Pietermaritzburg, the South African leg of the UCI World Cup circuit will be heading to the Cape – specifically Stellenbosch, on 10 March 2018. I joined the Bicycling team at the launch of the event; and I was struck by the professionalism and vision of the organising team, as well as the development of the course to date.

Stellenbosch is a small town that enjoys exquisite access to the outdoors combined with a village-like feeling, but not too far removed from the city of Cape Town. So it’s no surprise that it has a vibrant international endurance-athlete community, who gather during our summer months to prepare for the European summer season.

Historically, Stellenbosch has a link to the founding of professional mountain biking in SA, having hosted downhill world cups in 1997 and 1998 on the slopes of Botmanskop, roughly three kays away from the new venue.  Now Stellenbosch is set to host the opening round of the 2018 World Cup Series. Because it is the opening round, and at a new venue, it’s fair to anticipate the event will enjoy slightly superior  media coverage.

It also falls in the middle of South Africa’s cycling ‘super-week’, with the Cape Town Cycle Tour taking place the next day and the Cape Epic starting just six days later.

I did a number of laps, and can state without fear of dispute that the course is a visual spectacle that stands in strong contrast to anything else on the World Cup circuit. In its current form, it offers a decent amount of climbing, a number of tricky obstacles (my favourite name for a gnarly rock drop, in this university town: ‘Varsity Dropout’), and great viewing spots for spectators.

I have no doubt that the event will live up to its management affiliation, and be an ‘epic’  World Cup. 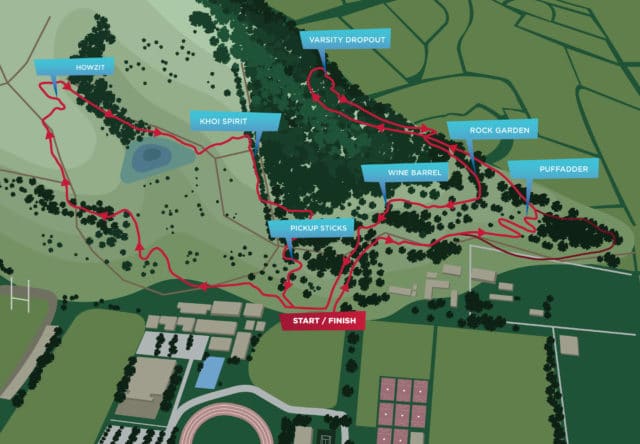 1. VARSITY DROPOUT. A tricky root-and-rock combination, leading into a big rock slab. Riders will need to slow down, lean back, keep a low centre of gravity, and use momentum to roll over the drop.
Difficulty level: 3/5

2. ROCK GARDEN. A long, tricky rock section, with multiple lines – and a big right turn, just when you think it’s over. Racers will need to practise, remain firm on the bike, and plot their lines ahead of time.
Difficulty level: 4/5

3. PICKUP STICKS. A steep descent, surfaced with embedded logs at awkward angles. Here, riders will need to get their weight right back, and use momentum to  carry them over  each section.
Difficulty level: 5/5

4. WINE BARREL. A dramatic corkscrew descent, which is visually spectacular but not too difficult. This will be fast; we’ll see racers flowing down, fully committed.
Difficulty level: 3/5

5. HOWZIT. The steepest and trickiest drop on the course. Riders will need to be careful, and get their technique spot on: getting right back, and letting momentum guide them.
Difficulty level: 4/5