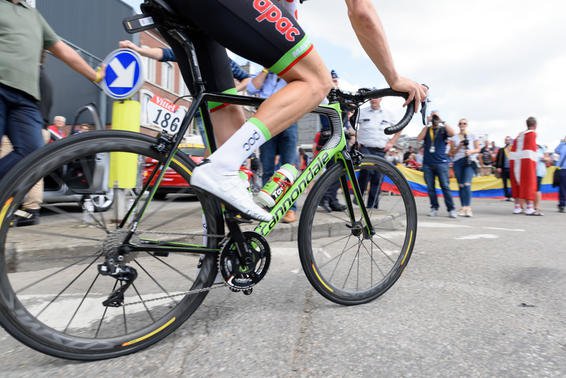 The frame is one of the last mass-produced high-end frames with a level (not sloping) top tube which offers a more traditional silhoutte. Other tech touches include a 25.4mm diameter seatpost (more deflection, smoother riding), the Speed Save “Micro-suspension system” (the engineers attempted to enhance the frames bump compliance without compromising stiffness), and some small aerodynamic tube shape tweaks. Phinney’s bike is outfitted with a Shimano Dura Ace drivetrain; Cannondale crank with SRM power meter spider and FSA chainrings, Mavic tubular wheels and tires, FSA bar stem and seatpost, and Tacx bottle cages. 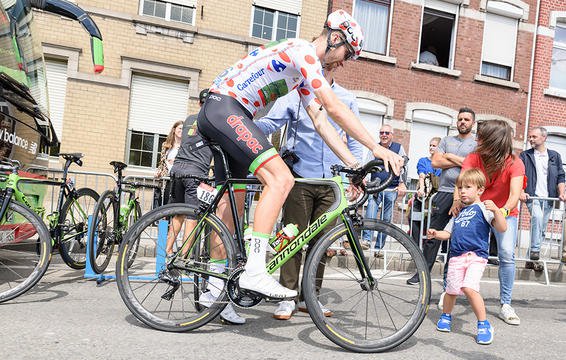 After a horrifying injury sidelined what was to be his debut in 2014, the 2017 edition of the Tour is Taylor Phinney’s first. He’s not starting slowly: Phinney attacked early and was quickly joined by three other riders. The four waned to two, and for a fleeting moment it looked like Phinney’s break might stay away, but he was eventually caught with less than 2 kilometres to go. Still, he picked up enough points on the stage’s two categorised climbs to ride himself into the polka-dot climber’s jersey. 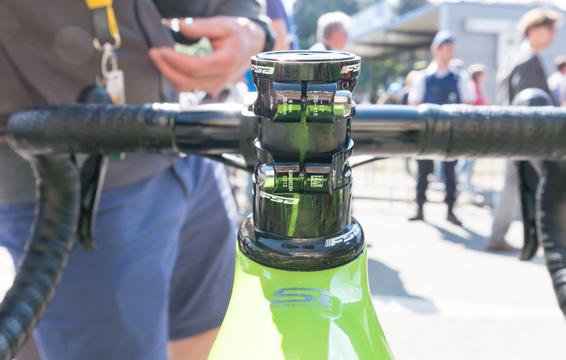 Phinney runs about the most pro stem you’ll find: 150mm long with a minus 17 degree angle. 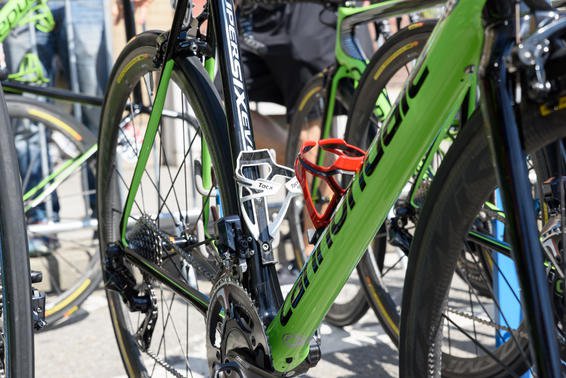 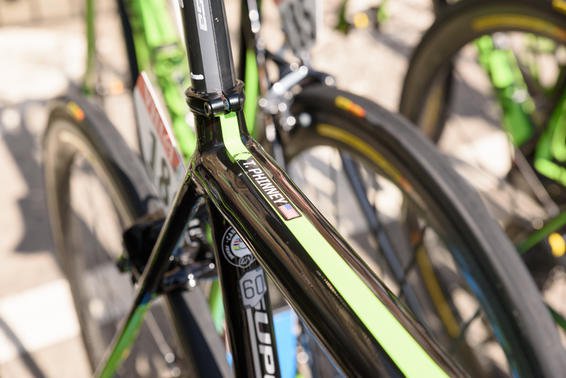 Talyor Phinney is one of just three American riders in the 2017 Tour: they other two are his Cannondale Drapac teammates Andrew Talansky and Nate Brown. 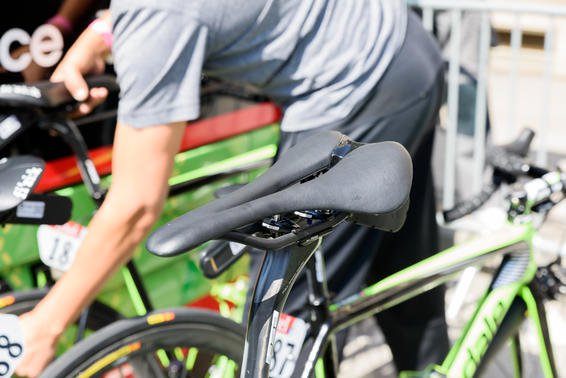 Cannondale Drapac is sponsored by Fizik, and most riders on the team run that company’s saddles. But riders have very personal relationships with saddles, and sometimes the sponsor’s line doesn’t offer something that feels right. That seems to be the case for Phinney who seems to prefer a Specialized saddle. Team mechanics have judiciously removed all logos. 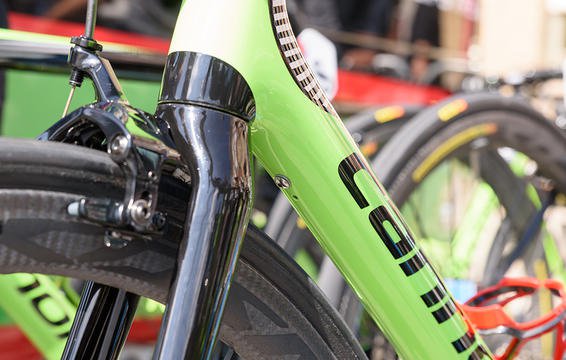 This random bolt in the downtube is the anchor bolt for a removable housing stop which is installed if the bike is equipped with a mechanical drivetrain. 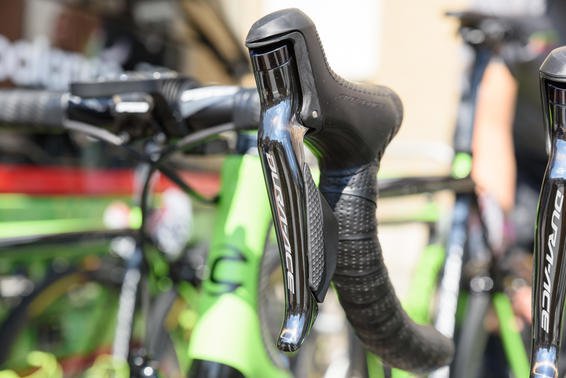 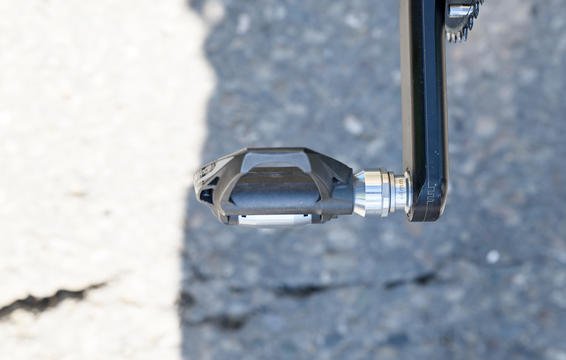 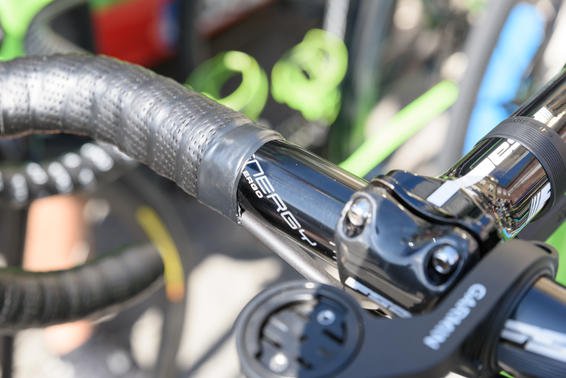 Though you’d expect to find carbon bars on all the bikes in the Tour peloton, a surprising number of riders use aluminium bars. The Cannondale Drapac team has a few riders on aluminium bars, including Phinney. There can be several reasons for using an aluminum bar: weight (particularly if the team’s bikes are very light and making the UCI’s 6.8Kg minimum is a challenge), stiffness, feel, available bends, and fit (bend, width, drop, reach). There’s another reason also: in a heavy crash, a carbon bar might break, but an aluminium bar will likely bend and the rider can continue with their race. 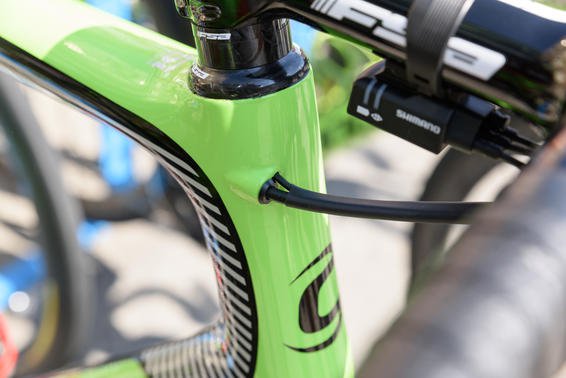 The Cannondale SuperSix Evo Hi Mod features this stealth wire port for use with electronic drivetrains. The drivetrain wire is paired with the rear brake housing, and the bundle kept tidy with heat-shrink tubing. 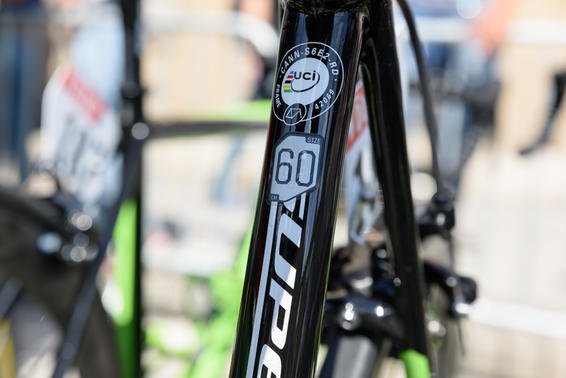 Phinney stands 197cm (about 6’4”), and rides a 60cm frame. Cannondale offers the SuperSix Evo Hi mod in eight sizes, starting with a 44cm and topping out with a colossal 63cm frame. 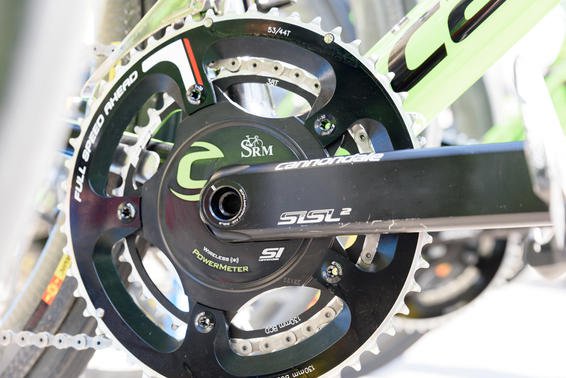 Like the rest of his teamakes, Phinney uses an SRM power meter on his bike, which is paired with Cannondale’s very light SiSL2 cranks. Note Phinney’s ring combination: a 53 tooth big ring with a 38 inner ring, instead of the usual 39. 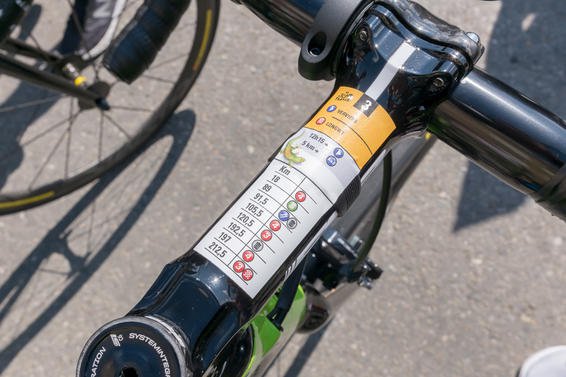 Every rider on the team gets the day’s stage summary affixed to their stem.