Cyclist Luka Pibernik isn't alone in embarrassing himself by prematurely claiming victory. Finish line flubs are common throughout the sports world: Here are some of the most memorable.

Cyclist Luka Pibernik isn’t alone in embarrassing himself by prematurely claiming victory. Finish line flubs are common throughout the sports world: Here are some of the most memorable. – By Joe Lindsey 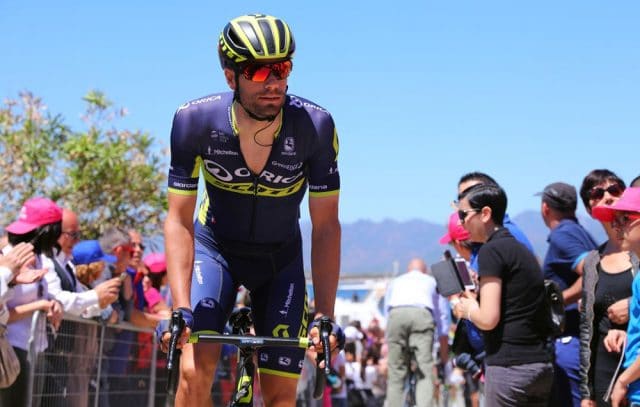 Pity Luka Pibernik. While racing Stage 5 of the Giro d’Italia Wednesday, the young Bahrain-Merida rider launched a bold attack out of the peloton and crossed the finish line with a jubilant celebration… only to find out he still had one lap to go.“The battery on his radio earpiece ran out,” said team leader and defending champion Vincenzo Nibali. “We tried calling him back to tell him, but he couldn’t hear us.”
Pibernik’s awkward moment instantly became the stuff of social media commentary and har-har-type stories, but it’s worth remembering that too-early celebrations happen more often than you’d think in the athletics: Many sports offer opportunities for their athletes to embarrass themselves at the finish line.Here is just a sampling of the greatest misinformed finish-line celebrations inside cycling and beyond.

During Stage 2 of this spring’s Tour of Abu Dhabi, young sprinter Caleb Ewan thought he had it on the line—only to see Germany’s Marcel Kittel nip him when Ewan posted up too early. Ewan did make good on the final stage, at least.

At the 2015 Giro d’Italia, Australian Simon Clarke won a small group sprint on Stage 4 and celebrated accordingly… except that Italian Davide Formolo had actually won the stage 22 seconds earlier as the last survivor of a breakaway.

Clarke’s consolation was assuming the pink jersey as overall leader. In post-race interviews, he gamely tried to claim that the jersey was his reason for celebrating, but his crushed look immediately after crossing the line gave him away.

Sprinting for the Wrong Line

Daiva Tuslaite attacked out of a five-rider break on Stage 4 of the 2015 Trophee d’Or, and had a gap when she sat up and clapped her hands a good 20 meters from the line—only to get passed by and lose to pursuer Anisha Vekemans.

“She thought she had already reached the finish line,” said Vekemans. “I was just getting to her and noticed it, I kept sprinting.”

Czech cyclocrosser Adam Toupalik was off the front at the 2016 World Cyclocross Championships and on the way to the win when he said fans shouting “last lap, last lap” confused him. In the finish straight with a commanding lead, he began an exuberant celebration. It continued after the line even as his chasers—Belgian duo Eli Iserbyt and Quinten Hermans—passed him, when he realised he had one more lap to race.

Toupalik caught back on and fought gamely, even attacking again, but could never reopen the gap; Iserbyt dropped him in the finishing straight for the win.

At the 2014 Tour of California, Jamis rider Eloy Teruel broke free of the pack on the finishing circuits around the Rose Bowl on the penultimate stage. As he crossed the line, he let out a celebration worthy of a rider with an almost decade-long pro career hunting for his first pro win. Problem: Like Pibernik, he was a lap too early.

The Standard by Which All Are Judged

In 2004, celebrated German sprinter Erik Zabel lined up for Milan-San Remo, a race he’d won four times in his outstanding career. If there’s a “Mr. M-SR,” it’s Zabel, who had the course so dialed that he would instruct his leadout men where to set up the sprint based on the breeze coming off the ocean.

So, coming off the Poggio descent in a large group, Zabel looked to have it in hand again when he unleashed a fearsome sprint. But, due to overconfidence, lack of focus or some other lapse, he sat up to celebrate just as Oscar Freire made a desperate bike throw for the line to grab the victory by mere inches.

Zabel’s devastating loss (he said afterward he was sure he’d won and never saw Freire coming) is pretty much the gold standard for the risks of premature celebration in cycling. Freire was no slouch as a sprinter; he would go on to two more M-SR wins himself and won three world road championships.

Tie Goes to the (Other) Runner

Cycling’s not the only sport with finish-line flubs. American distance runner Molly Huddle— a multiple-time national champion and the American record-holder for the 10k—was en route to a bronze medal in that distance at the 2015 World Championships when she began to lessen her pace and raised her arms in celebration. That’s when fellow American Emily Infeld blew by her to take the spot instead.

Lindsey Jacobellis was just 20 years old and crushing the snowboard four-cross final at the 2006 Winter Olympics. She had a comfortable lead and two of her three competitors had already crashed. So she boosted a huge method air (frontside edge grab) off the penultimate jump, only to get off balance and case the landing. She scrambled upright, but too late, as Switzerland’s Tanja Frieden passed her in the course’s final moments to take gold.

“The Band Is on the Field!”

No list of devastating final-moment defeats would be complete without The Play, as it’s called, from the famous 1982 Cal-Stanford rivalry game. Stanford took a 20-19 lead on a field goal with just four seconds left and an almost-sure victory. The California Golden Bears had other ideas: Kevin Moen fielded the kickoff and then lateraled the ball to Richard Rodgers. Four more laterals followed as football briefly became rugby. The last lateral, a blind heave by Mariet Ford, went back to Moen, who ran through the Stanford band (which had started onto the field for its post-game show, believing the game was over) to the end zone and collided with a trombone player.

There’s still dispute today about whether the final touchdown call was correct. (If you want to start a fight with a Cal fan, just tell him Dwight Garner’s knee was down before he lateraled.)