Peter Sagan is out, which upends the best sprinter standings for the rest of the race.

Peter Sagan is out, which upends the best sprinter standings for the rest of the race. – By Joe Lindsey 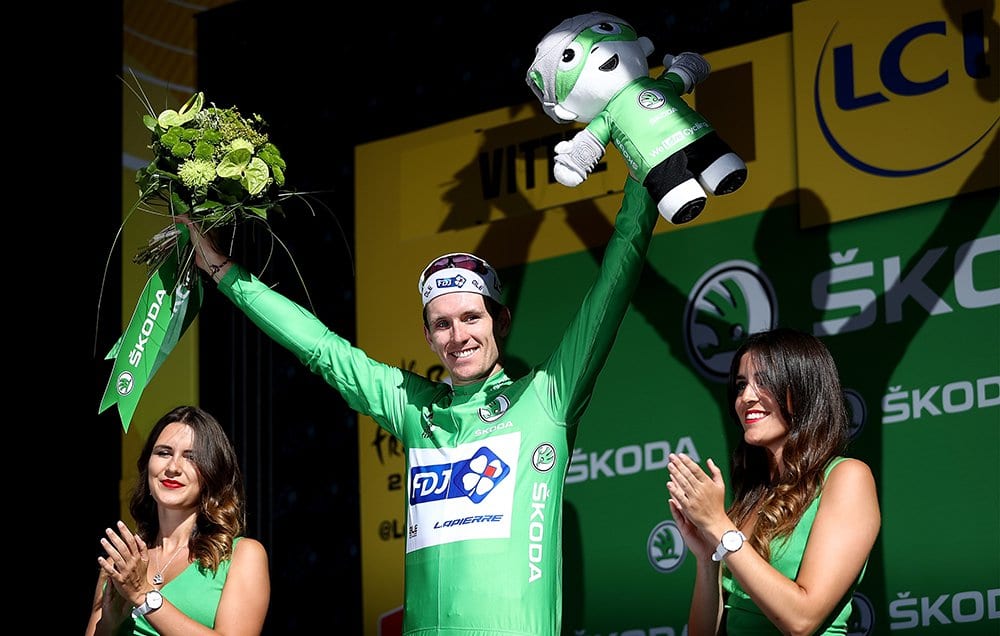 Spare a moment for Arnaud Démare. The FDJ sprinter became the first French rider to win a Tour de France sprint stage since 2006, and has also jumped out to a lead in the green jersey competition (again, the first time a Frenchman has led the competition outright since 2006, when Jimmy Casper won Stage 2).And yet, all anyone wants to talk about is Peter Sagan and Mark Cavendish, who tangled in the sprint that Démare won, and whether Sagan threw an elbow that caused Cavendish to crash, or if Cavendish tried to split a gap that wasn’t there and caused it himself. Either way, Sagan is now out of the race, 86’ed by the race jury for an “irregular sprint.” (Never mind that several sprinters’ lines, including Démare’s, were plenty irregular.)
Already, Sagan was facing relegation and a docking of the points he earned on the stage that would send him plummeting down the green jersey standings. But were that the case, at least he’d still be in the race with an opportunity to fight back. No longer.“We decided to disqualify Peter Sagan from the Tour as he endangered some of his colleagues seriously in the final meters,” said Philippe Marien, president of the race jury.For his part, Cavendish sustained a laceration to his right index finger that needed stitches and trauma to his right shoulder, but thankfully, no fractures. Still, he’s banged up, as is Trek-Segafredo’s John Degenkolb, who was unable to avoid Cavendish’s crash and went down hard on his own right shoulder.So, the five-time green jersey winner (Sagan) is out of the race, pending a possible appeal by his Bora-Hansgrohe team. The best sprinter in Tour history (Cavendish, with 30 career stage victories) may still be in but is now dealing with the effects of a serious crash and recovering from a long early season battle with Epstein-Barr virus that kept him out of most races.RELATED: Cavendish Targeted Merckx’s Tour de France Record for This Year

Démare, for one. The young French sprinter had never finished higher than third in a stage in two previous Tours. But he has four wins since the start of June already, and his form looks to be on a tear: able to match the pure sprinters like Andre Greipel and Stage 1 winner Marcel Kittel, but also able to climb, as he showed with a sixth-place finish on Stage 2 with its 1.6-kilometre ascent to the line in Longwy.

Démare now leads the points competition with 124 to Kittel’s 81. The first crash in the finish of Stage 4 was particularly costly to Kittel, who didn’t go down but was gapped off the front and never caught back on, finishing 13th and scoring four meager points (he added 11 in the intermediate sprint but again, Démare was fastest in the field and took 17 there, behind lone breakaway Guillaume Van Keirsbulck, and 50 for the stage win).

Unless an unlooked-for rider goes on a hot streak, the green jersey competition is rapidly narrowing to just a few likely contenders. Past Démare and Kittel, it’s Greipel, Alexander Kristoff and Michael Matthews who seem to still be in good contention.

Of these, Kittel is the most likely challenger. But the crash that separated him from the front of the race was costly to his team, with leadout men Fabio Sabatini and Matteo Trentin got bruises and cuts from the crash. Greipel is unbeatable with a good leadout, but he hasn’t had one yet and seems to be a little lost without it. He’ll likely win a stage, as he has at least once every year since 2011. But neither he nor Kristoff seem able—at least right now—to put together the whole package they need to cross the line first.

Matthews might be the most intriguing challenger, because like Sagan, he’s known for his climbing abilities (he was second to Sagan on Stage 3). There aren’t a ton of mixed-terrain stages this Tour, but now Matthews is in the prime position to take advantage of them while still showing decently in flat sprints. That said, Démare showed he’s got decent climbing form right now as well, and it won’t be easy to get rid of him in the hills.

All that’s really certain about the green jersey standings in the 2017 Tour is that, barring an extremely likely reversal of the race jury decision, it will be a new winner in Paris. And, whatever side of the debate you stand on about who caused Cavendish’s crash and whether DQ’ing Sagan was fair or too harsh, with Sagan out and Cav ailing, the competition shines a little less bright.