Are There More Crashes Than Usual at This Year’s Tour de France?

THE 2021 TOUR SEEMS LIKE A MESS SO FAR. BUT REALLY, IT’S NOT THAT OUT OF THE ORDINARY—AND STOPPING THESE CRASHES WON’T BE EASY.

When the first bunch sprint of the 2021 Tour de France was contested by *checks results* just 17 riders, you know something went seriously wrong – and the crash-fest was only just beginning. The first three days of the Tour has had is wincing and squirming in sympathy, as skin and bone have been sacrificed in seemingly huge volume for our viewing ‘pleasure’.

Just when we thought it would calm down a bit with a simple sprint stage, Stage 3 asked us to hold its beer—starting with when 2018 Tour winner Geraint Thomas went down hard just 40km in, and ending with several nasty high-speed crashes include Caleb Ewan tangling with Peter Sagan in the final meters for a crash of immense televisual impact.

These were just a few of the flurry of serious crashes that have hit this year’s Tour so far. As a result, fans and commentators are opining that the problem seems worse than normal, and are searching for causes: It’s unruly fans, or it’s the narrow roads of Brittany, or there’s too much “road furniture”—the bollards and roundabouts and other traffic-calming devices used to slow down drivers in normal traffic.

Whether it’s that the Tour has too many riders taking too many risks, or that course organisers make unsafe route selections, everyone has a theory for why it’s worse this year.

So what is going on? All of the above. And it’s not necessarily much worse than past years.

Are fans getting in the way more?

Clueless fans stand centre stage in this year’s Tour after one caused a horrific crash in Stage 1 by trying to mug for the camera with her “Allez Opi Omi” sign (the terms are German for Grandma and Grandpa). But it’s hardly the first time a bystander has caused such mayhem. In 1994, Wilfried Nelissen sprinted full-speed into a gendarme who’d leaned out to take a photo. In 2006 a fan waving one of the green PMU hands passed out by the publicity caravan accidentally slashed Thor Hushovd’s arm so deeply the wound actually spouted blood. In 2014, selfie-crazed fans in Yorkshire caused so many problems organisers had to issue a public plea for better behaviour. And of course, who can forget the errant musette strap waved by a fan that hooked Lance Armstrong’s handlebars and sent him crashing to the pavement in 2003?

READ MORE How To Get Your Mojo Back After Crashing

The truth is, for every fan-caused crash, there are dozens of near-misses a day. At the 2010 Tour, an estimated half a million fans lined the side of the road for the opening road stage in Rotterdam. Simply driving a press car on the route was enough to spike the heart rate. As long as there are fans on the roadside, there will be mistakes, and that is not counting intentional acts, of which there have been blessedly few. The Tour route is impossible to fully secure; even in the heightened measures around the Champs-Elysees, in the 2015 edition a man dressed all in ghostly white entered the finishing circuits and stood in the middle of the road as the riders swept around him like a river.

Too many riders, taking too many risks?

There were 184 starters in this year’s Tour: more teams than past years, at 23, but with one fewer rider each. That’s not appreciably more or less than most recent editions. And it’s down from the swollen packs of nearly 200 as recently as 2017. As for risks, riders will take them in the Tour more than any other race. Caleb Ewan’s Stage 3 crash was awful, but also mostly his own fault as he and Peter Sagan bumped for position on Jasper Philipsen’s wheel.

And just like fans, riders simply make mistakes too: one of the worst crashes at this year’s Giro d’Italia took place on Stage 15, with just a touch of wheels right at the start that caused a pileup so bad the race completely stopped for half an hour to tend to the injured. 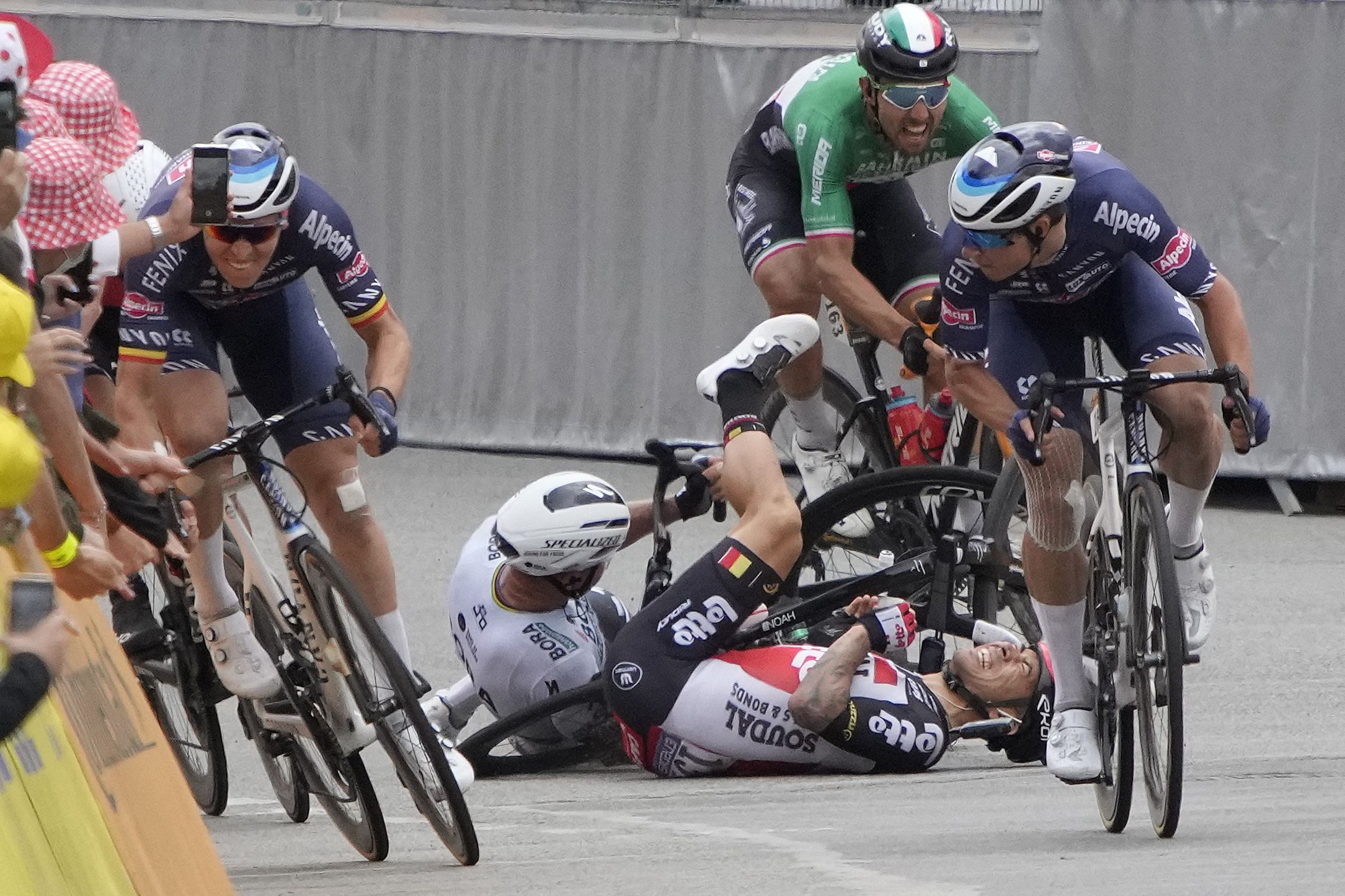 Is the course more dangerous?

There’s been a lot of talk about whether courses are more dangerous now. But the roads of Brittany have not grown smaller since 2008, the last time the Tour held its Grand Depart in the region. What has changed in the past 15 to 20 years is the increased use of traffic-calming devices in the centres of towns. This is in all of Europe, not just France. And whether at the Tour, or the Giro, or any other race, the bollards, planters, medians, roundabouts, and other additions that make pro cycling so dangerous are, ironically, what make those roads safer for everyday riding.

That’s not to say courses are beyond improvement. On Stage 3, riders faced a slight downhill in the final 10km and then a tricky set of zig-zag turns around 2km to go to cross the Blavet river. No one crashed in the sharp corners, but it’s worth wondering if the big pileups at 10km and 5km to go were partly a function of riders fighting to be up front for the technical finale. Had the course simply gone slightly farther south, other bridges provided a far-more straightforward entrance to Pontivy and the finish, at the cost of a few kilometres more racing. It’s hard to imagine the riders trading a slight reduction in course distance for a more dangerous route.

There are any number of proposals for how to fix these issues: more barriers to keep fans back, for instance. Or changes to timekeeping. Under UCI rules, anyone who crashes inside 3km to go gets the same time as the winner. This ostensibly lets riders not fight so hard for position inside the finale, and there are calls to extend it: to 5, 8, 10km out, or to simply take elapsed time at 3km to go and then let the sprinters have it out.

At this point, I’m open to trying various ideas, and course design seems like one area that’s worth special attention. But the problem with many solutions is they fight the last war. How many more kilometres of barriers do you need to keep riders safe? Will fans just gather in other spots then? If we extend the 3km rule to five or eight kilometres, what do we do about crashes that happen at 10km to go? Will it just push the argy-bargy back further as riders fight for a virtual finish line?

Crashes happen for a variety of reasons, many of them outside of anyone’s real control. Consider Stage 3 of the 2010 Tour, where Sylvain Chavanel was on the break in the Ardennes ahead of a fast-closing pack. As we stood outside a bar in Stavelot, Chavanel swept past, followed by a few official vehicles. Thirty seconds passed, and no chasers. Then a minute, and still no riders. Finally, a group of shaken racers rolled by with yellow jersey Fabian Cancellara at the front, making the universal motion to slow down.

A sudden cloudburst, the first in weeks, had hit the descent of the Côte de Stockeu just before the race passed. The rain mixed with fuel oil left on the pavement by farmers’ tractors and turned it into an ice rink. Chavanel made it down ok, but over a dozen riders in the chase crashed and essentially blocked the whole road; we learned later that even the team cars had trouble stopping. What mix of neutral course/severe weather/act of God rules do you gin up to deal with that?

The simple fact is that the Tour is, and always has been, filled with crashes. This year may be slightly worse than normal, but if so, it’s partly notable just for those involved: big names like 2018 winner Thomas, and last year’s runner-up Roglič.

We also see more of the crashing than in the past: streaming options abound, and the coverage is full-stage, or close to it, every day. You can queue up crash GIFs on social and compilation videos, even on official broadcasters. Fifteen years ago, Thomas’s crash and chase would’ve made race reports, but not been shown live. We remember this Tour as worse for crashes because we easily forget how bad previous years were for crashes. Who knows what we’ll have amnesia about next year?