The Visual Guide to Mastering Pacelines

These tips and tactics will help you feel more comfortable and confident in any road cycling formation.

These tips and tactics will help you feel more comfortable and confident in any road cycling formation. – By Selene Yeager 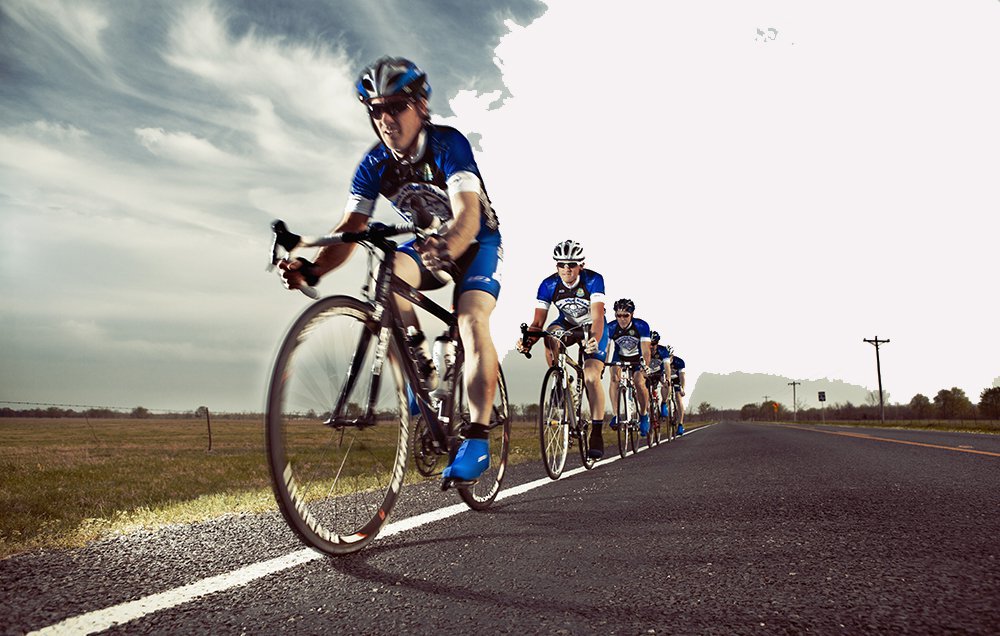 One of the biggest forces holding you back as a cyclist is the air that surrounds you. The faster you go, the harder you hit the air—and the more resistance you feel. That’s why increasing speed becomes exponentially harder the faster you go and why you’ll always be faster (not to mention fresher) working with other cyclists in a paceline: cycling formations where riders take turns battling the wind.But as any kindergartener can tell you, working and playing well with others is sometimes easier said than done. This is particularly true when you’re in a pack of mixed-ability riders humming down the highway at 35km/h.The biggest mistake most riders make in a paceline is right in the name, says Andy Applegate, a pro cycling coach with Carmichael Training Systems.“A paceline requires just that—proper pacing,” he says.

Instead of maintaining a steady pace, they surge ahead and slow down—which is not only so tiring that the pack eventually blows apart, but also dangerous. Riders will find themselves overlapping wheels and hitting the brakes, Applegate says.

Some of paceline finesse comes with time and experience, but there are specific skills you can practice to improve your pacelines right away. Here’s what to work on for every formation.

This is the most basic formation and best suited for small groups of about a half dozen riders. As the name implies, it consists of one line of riders, each riding about a foot (depending on the comfort and experience of the group) from the wheel in front of them. Each rider takes their turn at the front and then pulls off to the side and drifts to the back of the line.

The pitfalls
Riders at the front going too fast; riders pulling too long; sudden changes in speed; and erratic behavior in the line from unforeseen obstacles like potholes and road kill.

Pointers to perfect it
Use your bike computer. Nobody podiums the paceline. Pay attention to the group’s average speed and effort and maintain those levels when you’re at the front.

Microadjust. Stay off the brakes and keep your pedals turning as much as possible. Make microadjustments in your speed as necessary by soft-pedaling, feathering the brakes lightly to scrub speed, and sitting up or shifting over slightly to catch a bit of wind.

Establish a pull range. Establish a range—two to three minutes is a good norm—of about how long each person should stay at the front. If you have a large disparity in fitness and ability, stronger riders can take longer pulls, but you still want to share the load and keep everyone fresh.

Hug the line. Continue pedaling and stay close to the line as you pull off and drift back so as to not lose all momentum and lose the back of the pack.

Call out obstacles in the road. Always call out potholes and other obstacles so everyone is alert and has time to react.

This formation works best for larger riding groups. The rules are the same as for the single paceline, only now you’re all riding two-up. The front riders take their pull, then drift off to their respective sides of the pack as riders behind them pull through.

The pitfalls
You’ll face the same hurdles you would in the single paceline, with the additional challenge of the front riders maintaining the same pace side by side without half-wheeling (riding just in front of the rider next to you). This disrupts the rhythm of the pack and is considered bad form. There’s less room for error in a larger, tighter formation.

Pointers to perfect it
All the rules of single-paceline riding apply here. In a double, you should also take care to:

Think shoulder-to-shoulder. Stay in line with the rider next to you, especially at the front, by keeping your shoulders in line.

Pull off in sync at a safe place. Be mindful that the left-hand rider will be pulling off toward the edge of the road. Work together at the front and agree on good pull-off points that give you and everyone in the pack the room they need to negotiate. Also pull off together so nobody has to surge to fill an unexpected gap at the front.

This is an advanced variation of the double paceline: Both lines are in constant, circular rotation, with the inside line moving faster than the outside line.

No one rider pulls for any length of time in this formation. Rather, when you are the front rider on the inside, faster line, you start drifting left as soon as the rider in front of you has moved left and has drifted back one bike length. Then, you soft-pedal back, and the next front rider drifts to the left-hand line. When you hit the back of the left-hand, slower line, you drift right into the slightly faster line.

The pitfalls
This formation is considerably more challenging to execute smoothly than those listed above, especially with a mixed group of riders who don’t practice it regularly.

The biggest pitfall comes when there is a huge disparity in speed and effort between the two lines, so riders find themselves forced to make repeated punchy efforts to keep up with the faster line, which wastes rather than conserves energy.

Pointers to perfect it
Pay attention to pedal pressure. The trick to maintaining a rotating paceline is to pay very close attention to the pressure you’re putting on your pedals. You should feel like you’re pedaling consistently and normally as you work your way up the right-hand side and are soft-pedaling as you retreat down the left-hand side. If riders in the advancing line start surging to the front, the effort will become unsustainable for a long ride.