Check out how the peloton goes and slows with these 14 high-tech drivetrain and brake configurations used in this year's Tour.

Check out how the peloton goes and slows with these 14 high-tech drivetrain and brake configurations used in this year’s Tour. – By Matt Phillips 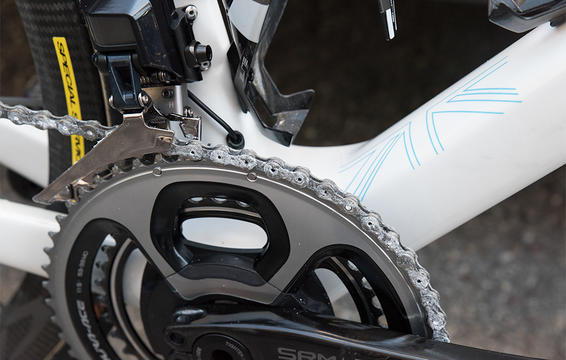 Ceramic Speed’s teams in the Tour—AG2R-La Mondiale, BORA-hansgrohe, Cannondale-Drapac, Dimension Data, QuickStep Floors—are using the company’s teflon-coated UFO chains. The epitome of marginal gains, the UFO chain claims to save two to five watts (compared to the same chain without the treatment). That advantage lasts 600km before the coating wears off. Though 600km isn’t much, Ceramic Speed has made signifiant improvements in this area: previously the UFO’s advantage only lasted 320km. 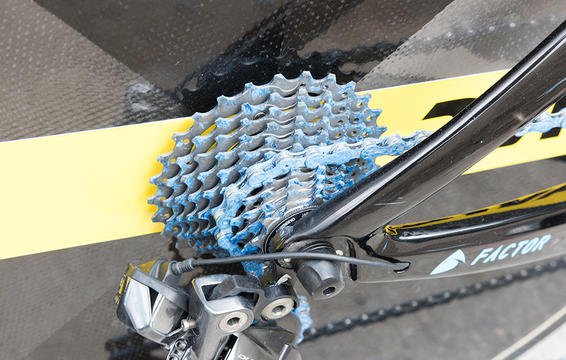 Ceramic Speed’s stock UFO chain coating chalky-white, but for the 2017 Tour de France, the company whipped up some coloured coatings. AG2R La Mondiale got blue to match the team’s colours, while yellow and green chains were at-the-ready in case any of Ceramic Speed’s sponsored riders donned a leader’s jersey. Ceramic Speed representatives stated that the coloured chains will be offered to the public, “likely at the end of Q3,” but a price was not available. 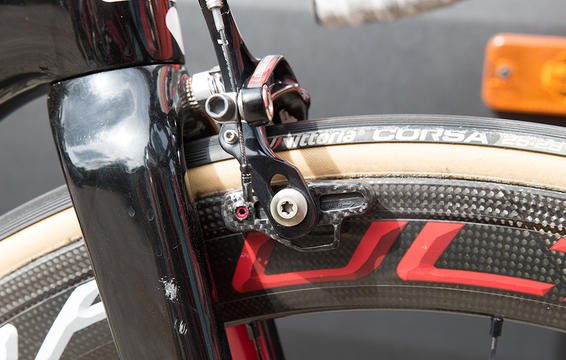 Lotto Soudal rider’s Campagnolo rim brakes were tricked out with Tune’s carbon pad holders. Handmade in Germany and dressed up with titanium and aluminum hardware, a set of four holders weighs 59 grams. Newer versions of the holder have a unidirectional carbon finish and not the woven finish shown. 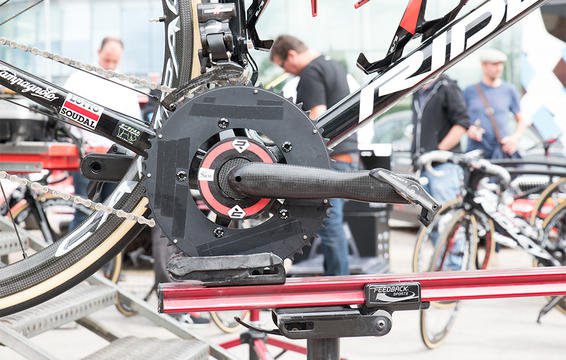 It’s always worth a close look at the gear Lotto Soudal’s Adam Hansen is using. Not only does he make his own carbon shoes, Hansen’s bike is always unique. He prefers to ride 180mm cranks on his road bike, but Campagnolo’s (his team’s drivetrain sponsor) longest offering is 175mm. So Hansen uses un-logoed Lightning Cycle Dynamics cranks with 180mm arms, and what we guess are SRAM chainrings (with logos hidden under electrical tape). 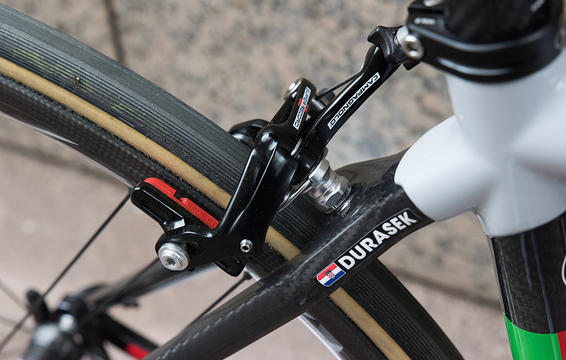 Campagnolo offers its high-end rear brake calipers in two styles: a lighter, single-pivot caliper (shown), or a two-pivot caliper that’s 25 grams heavier, but offers better power and modulation. Though I saw both calipers employed by the Campy-sponsored teams in the Tour—Movistar, UAE Team Emirates, Lotto-Soudal—it seemed like the lighter single-pivot caliper was more popular. 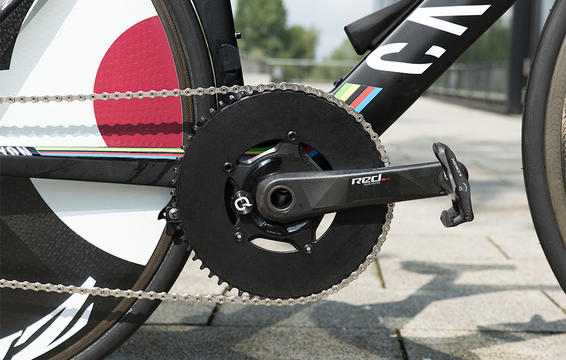 Katusha-Alpecin’s Tony Martin was riding an interesting drivetrain on his TT bike for the opening time trail. Instead of a two-chainring, close-ratio cassette, Tony used a single ring and SRAM’s Red eTap WiFLi derailleur with an 11-32 cassette. This system provided simplicity (Martin only needed to manage one derailleur) and potentially some aerodynamic benefit. However, because SRAM doesn’t (yet) offer an eTap rear derailleur with a pulley-cage clutch—which helps tame bump-induced chain oscillations—chain security was entirely managed by the chainring’s alternating thick and thin teeth (SRAM calls it X-Sync). If the road surface is very smooth, the X-Sync ring’s security is probably enough, but without a clutch derailleur, the chain could bounce off if the road surface is bumpy. Consequently, this combination of drivetrain bits is not officially recommended by SRAM. 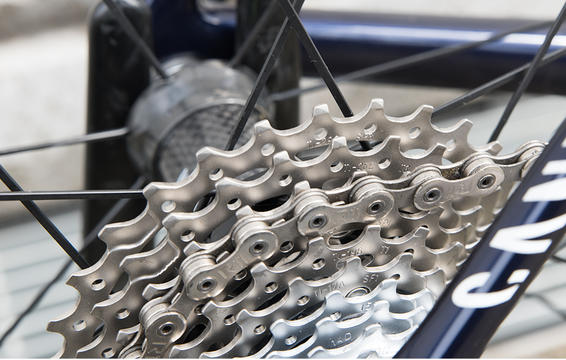 Proving that the riders in the Tour are sensible and human after all, I observed a lot of bikes equipped with wider-range cassettes, like Campagnolo’s 11-29 shown here. I also spotted a lot of Shimano 11-28 cassettes (and some of the new 30t Dura Ace 9100 cassettes), and even a few of SRAM’s WiFLi 11-32 cassettes. Despite the reasonable cassettes, Tour rides still primarily use 39/52 chainrings for road stages. 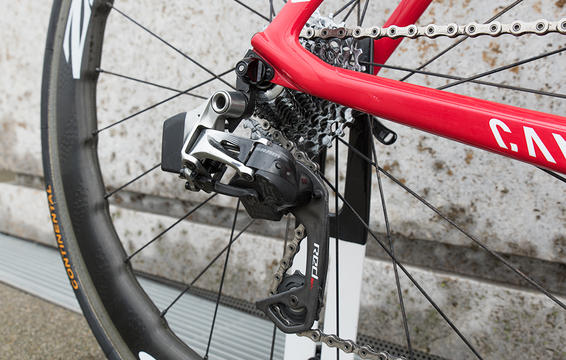 Most of Katusha-Alpecin’s road bikes were equipped with SRAM’s longer-cage Red eTap WiFLi rear derailleurs. While the riders would use SRAM’s 11-28 or 11-26 cassettes most often, the longer-cage rear derailleur gave the mechanics the option to install SRAM’s wider-range 11-32 cassette when the riders requested it. 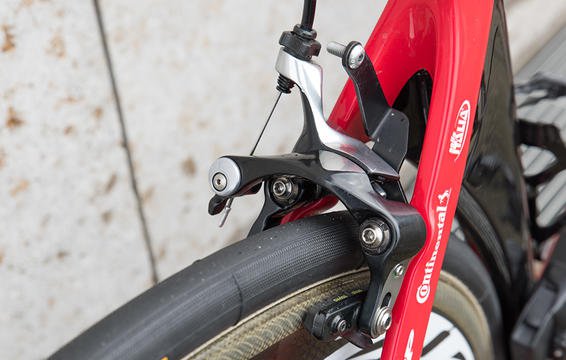 SRAM does not make a direct-mount rim brake, so SRAM-sponsored Katusha-Alpecin resorts to using Shimano Dura-Ace calipers (with the logos removed) on the team’s Canyon Aeroad frames. 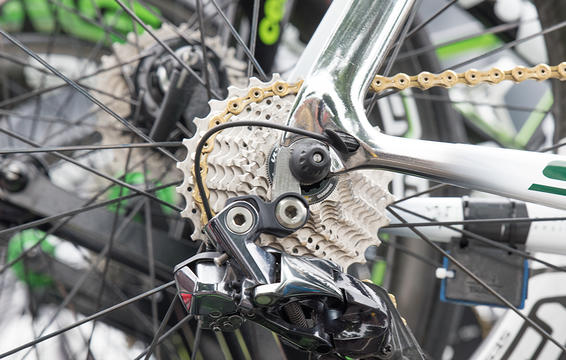 Mark Cavendish’s Cervelo S5 was sporting a different rear derailleur hanger than the rest of his teammate’s bikes. When questioned about its purpose, a team mechanic told me it was designed to make the chain drop onto the 11-tooth cog more consistently. 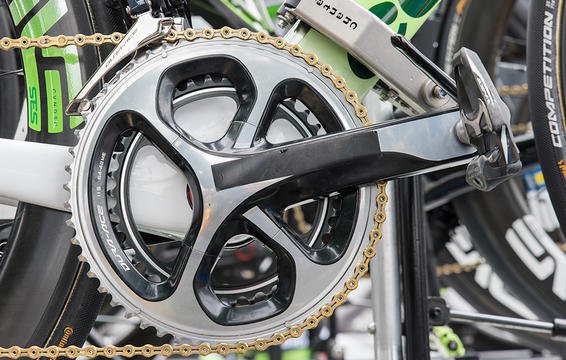 Though most of Team Dimension Data’s bikes are built with cranks and rotors from team sponsors (Rotor and Speedplay respectively), Mark Cavendish seems to prefer Shimano’s Dura-Ace cranks and pedals. 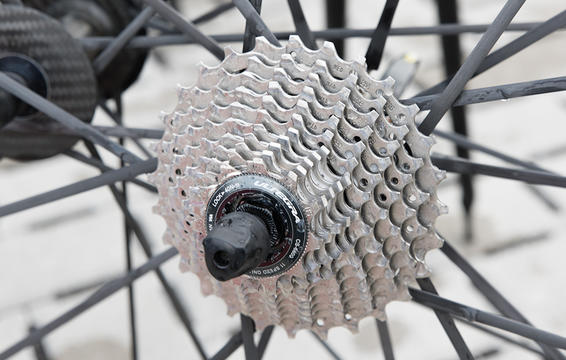 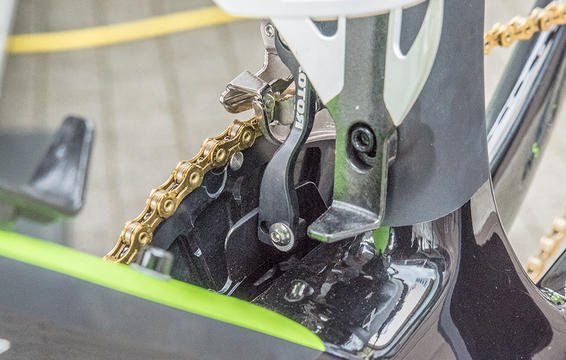 Rotor provided Team Dimension Data with this new (and burly-looking) chain catcher. The previous iteration of Rotor’s catcher is an ‘I’ shaped finger, but this one is an inverted ’T,’ with a tall and wide plate to ensure the chain falls on the small ring. Though it’s not yet shown on Rotor’s website, a Rotor representative in the USA said the catcher is currently available to the public. 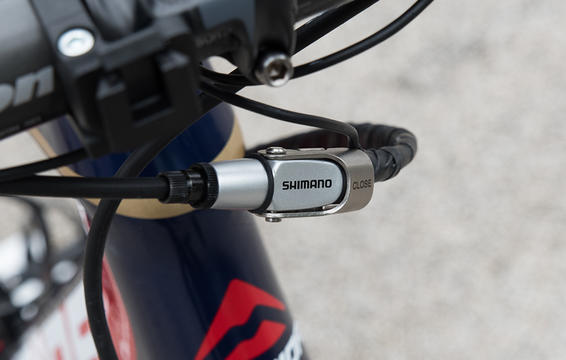 Under-the-chainstay brakes were once a trendy feature on road frames, but they’re losing favour. Chief among the reasons: It’s harder to work on, and harder to reach in a critical moment. It also has a propensity to collect gunk. Finally, because of the way it flexes, a wheel is more likely to rub on a brake that’s about 90 degrees from tire’s contact patch than brake that that’s about 180 degrees away.

That said, there are still a few bikes in the peloton that have under-the-chainstay brakes, including the Scott Foil, and the Merida Reacto. Those bikes are usually equipped with this inelegant Shimano in-line brake release, which helps speed up wheel changes, and offers riders an on-the-fly way to open the rear brake arms on climbs to eliminate wheel rub.