Is This The Do-It-All Dual-Susser to Rule Them All?

As far as off-the-shelf XCO racing rigs go, Cannondale’s Scalpel-Si Carbon 4 is as fast as they come.

As far as off-the-shelf XCO racing rigs go, Cannondale’s Scalpel-Si Carbon 4 is as fast as they come. 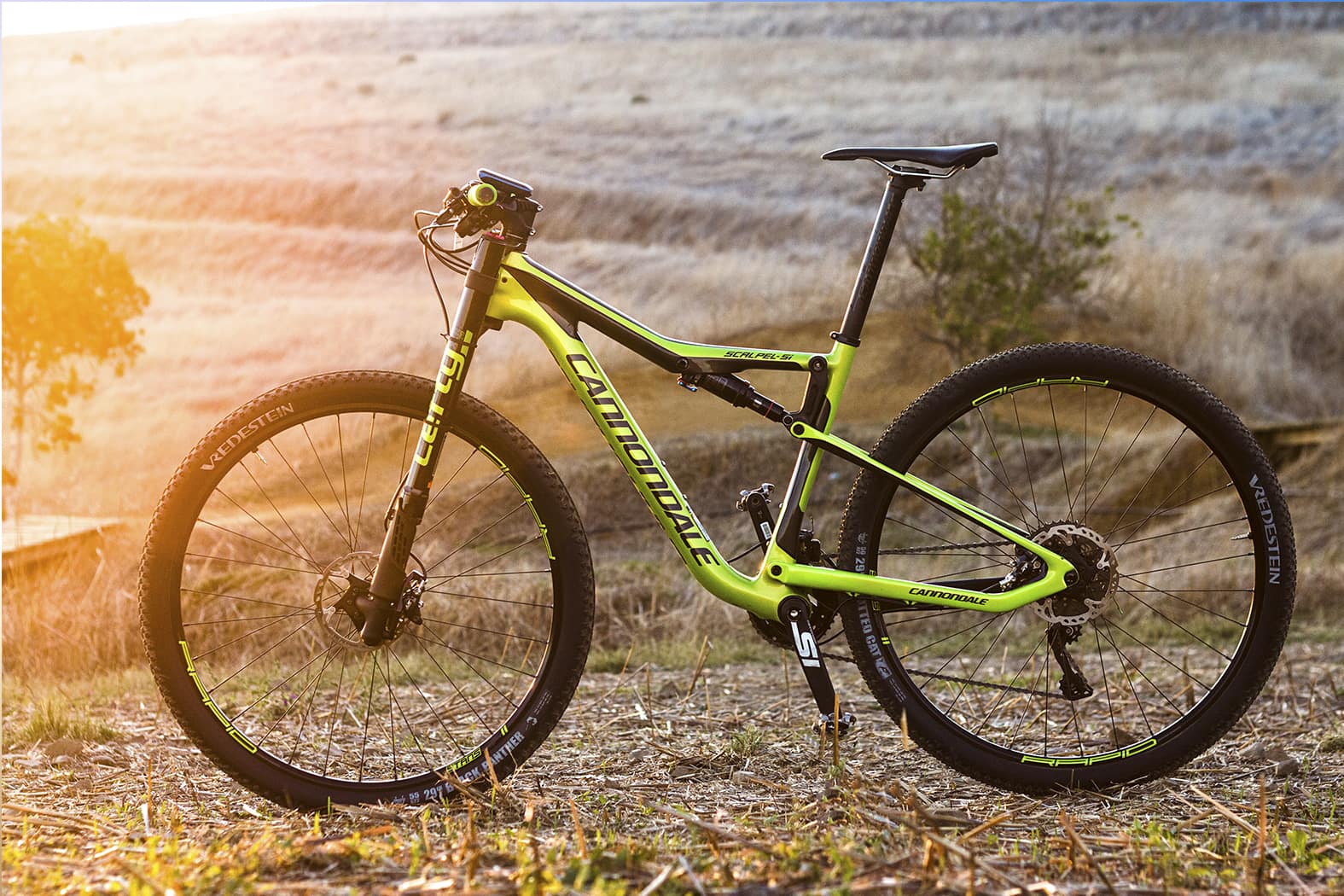 Every manufacturer is doing it right now – and it’s working. You need only jump on one of the latest-generation 29er dual-suspension race weapons to know what I’m on about.

You know – the wonders of relaxed geometry.

We’ve already experienced this with the mighty impressive Scott Spark RC900 we tested a few months back. We were blown away by how the revised geometry made for better stability and traction out on the trail, and the new Scalpel-Si follows very much the same trail-oriented bias. 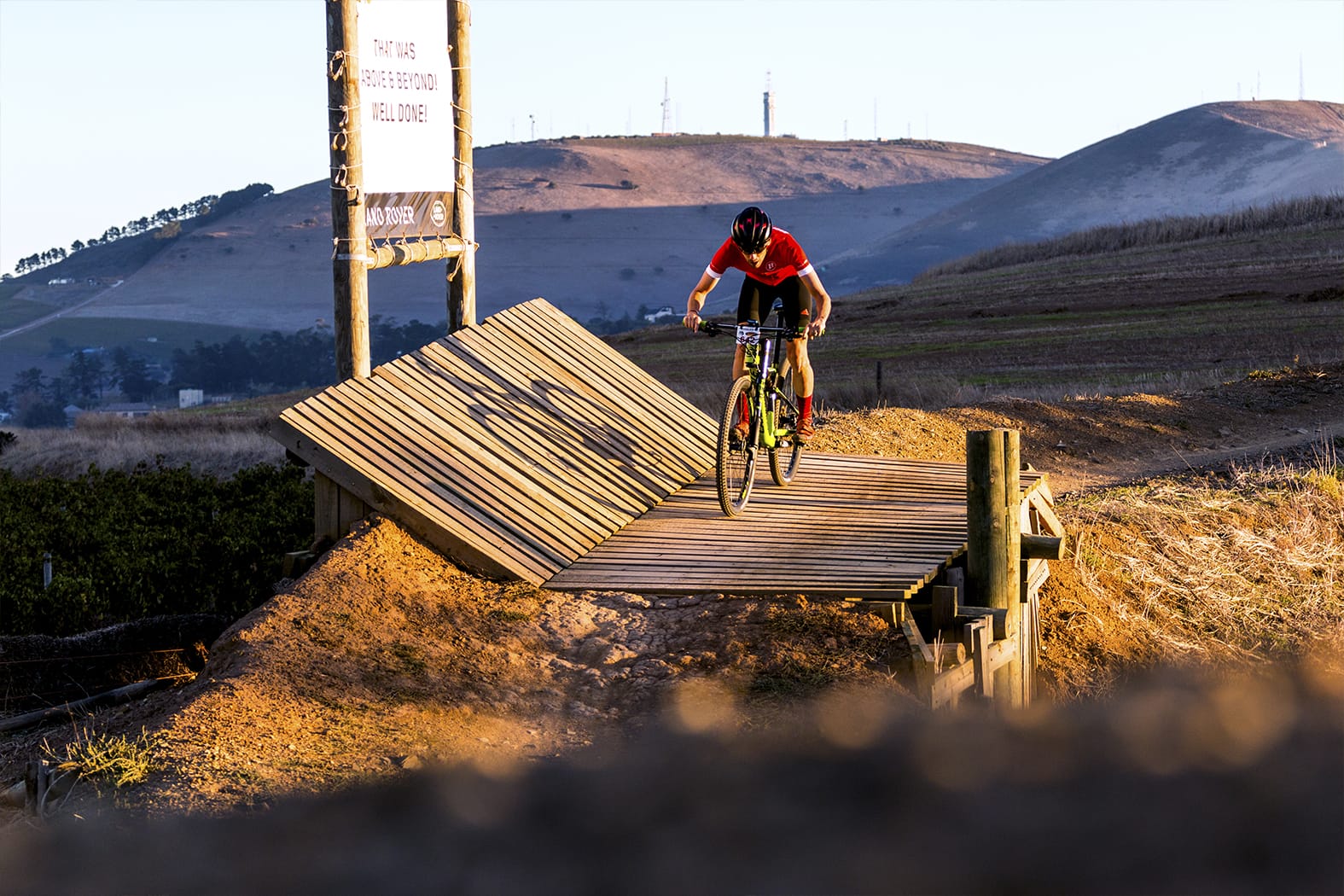 My daily ride happens to be the previous-generation Scalpel; and while I love it dearly, it has its weaknesses – the most notable of which is the twitchy front end. So you can imagine my eagerness when the new model arrived at the Bicycling offices; after all, Cannondale has addressed its predecessor’s idiosyncrasies by adding more refinement, comfort and dynamism to the equation – or so I’ve been told. Let’s see if it lives up to the claims… 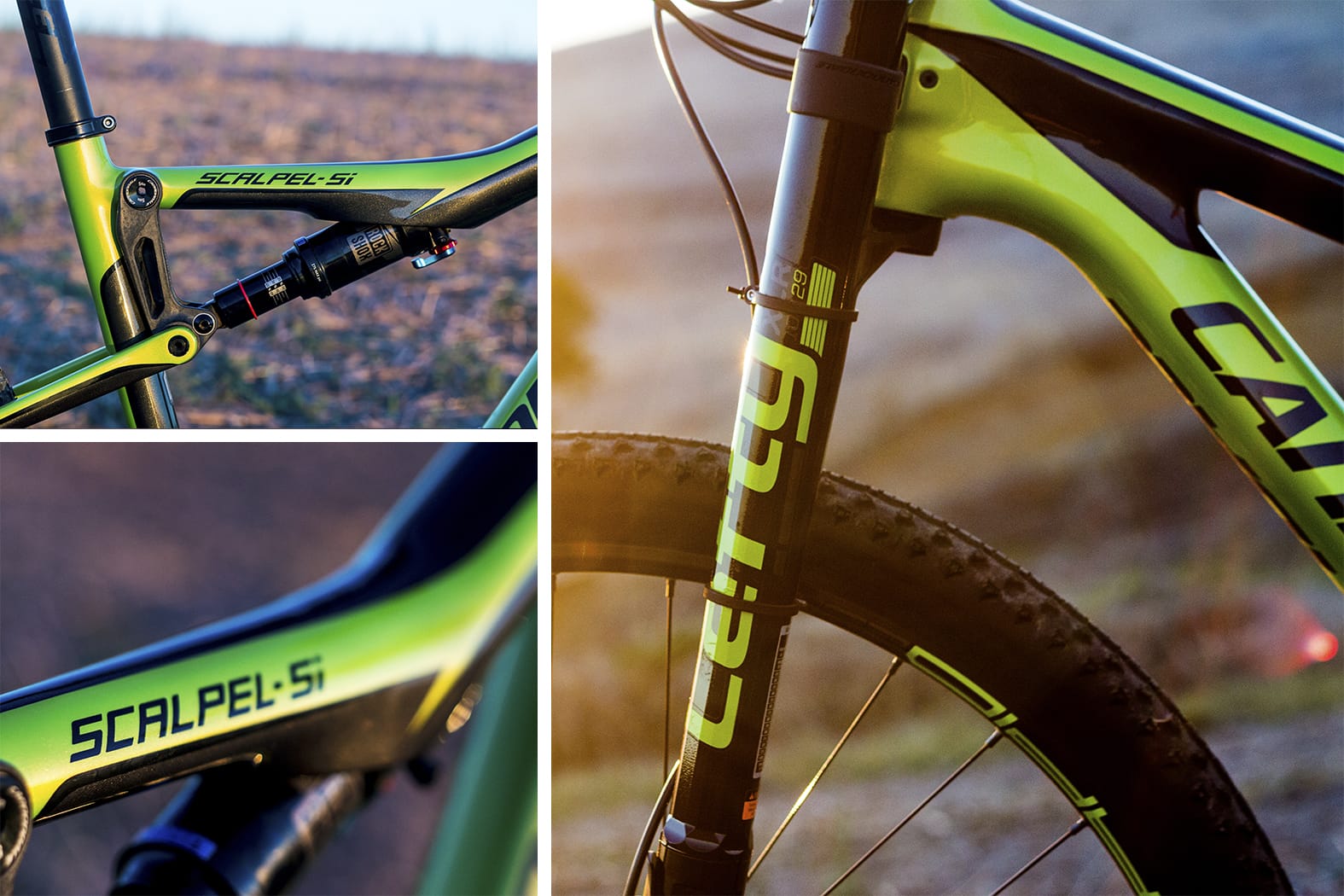 I’ll admit I had my doubts; but parked next to each other, the visual differences are immediately obvious. While the US manufacturer has kept the same stylistic recipe, a series of cunning tweaks to the frame geometry has not only refined the Scalpel-Si’s appearance; it’s also made the entire set-up more functional as a result. The asymmetric frame and wheel design have fixed the tyre and chainline clearance issues of the past; and finally, it accommodates two water bottles. Tricked out in metallic-green paint with contrasting black accents, the visual drama exuded by our Carbon 4 test unit is hard to ignore. This colourway theme continues on the Stan’s NoTubes ZTR Rapid wheels, Lefty fork and grips.

I definitely felt less work was required of my core to keep this bike moving in a forward trajectory – especially up sharper climbs and switchbacks. 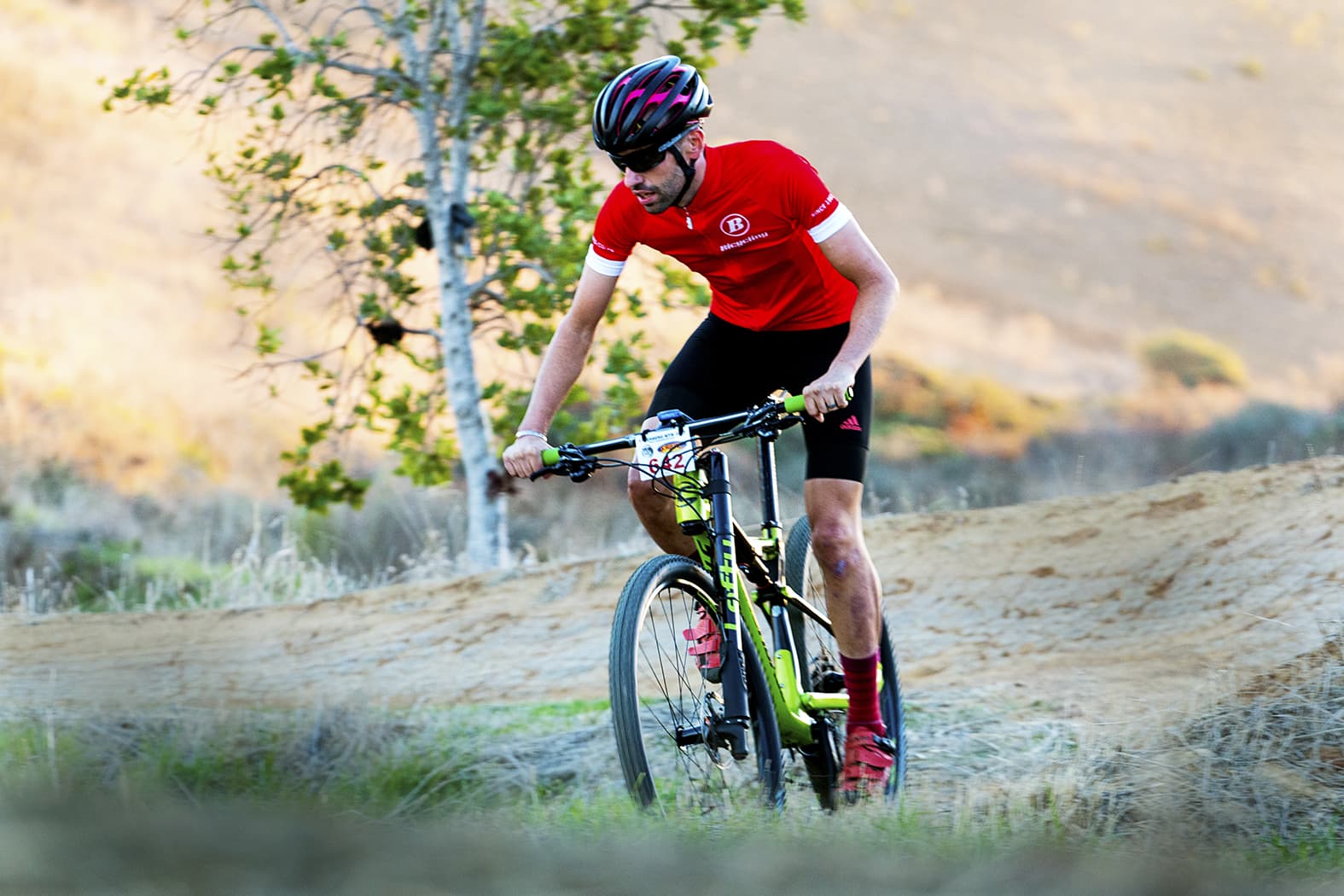 Is this bike truly faster than its forebear? While the crux of this question depends squarely on the fitness and strength of the rider, the underlying truth is more about how much energy the new, relaxed set-up saves you: loads, actually. While the Carbon 4 isn’t a particularly highly-specced unit, I definitely felt less work was required of my core to keep this bike moving in a forward trajectory – especially up sharper climbs and switchbacks. 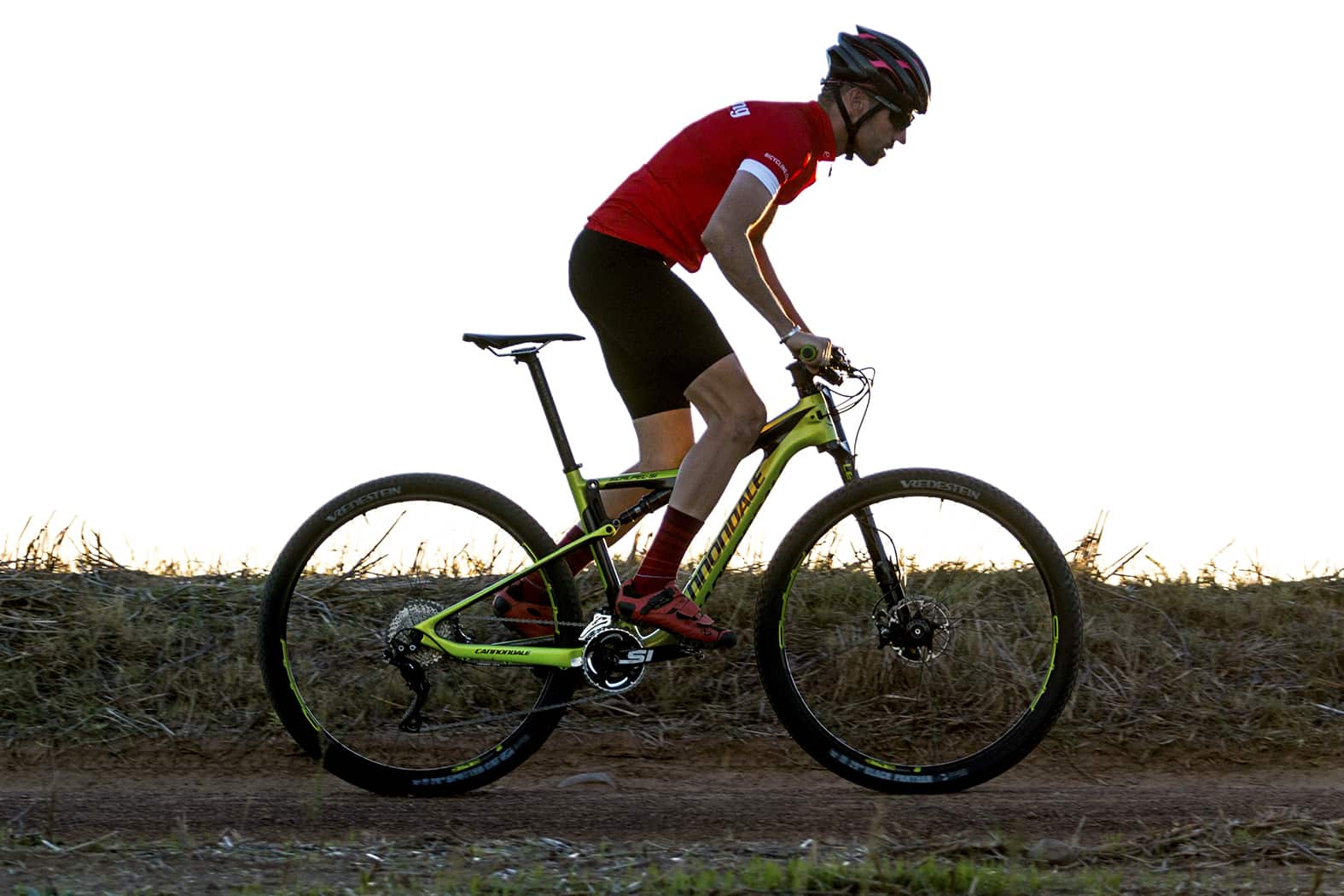 The Carbon 4 employs a 2×11 Cannondale Si/Shimano drivetrain – a set-up that supplies a prodigious range, complete with a leg-saving, hamster-spinning granny gear ratio for those nasty, wall-like climbs. Those of the 1x persuasion will find the 36T big ring in combination with the 11-42T sprocket more than adequate when it comes to most trails, but switching to the smaller 26T ring will undoubtedly save your legs on a big day out with more climbing than usual. Besides, Karl Platt swears by his Shimano 2×11 drivetrain and its superlative range. 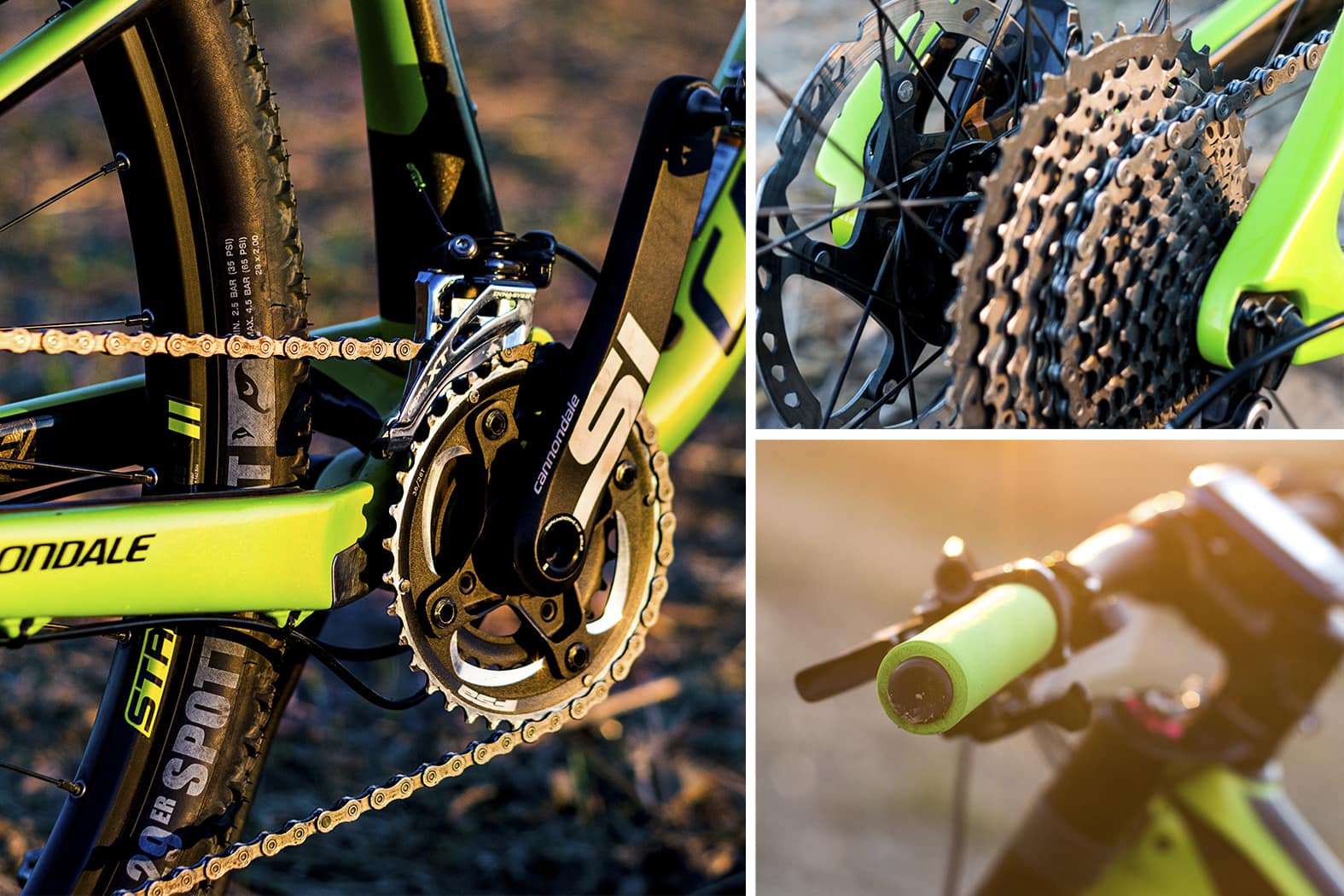 Stopping power comes compliments of XT brakes with 160mm rotors, a solid set-up we’ve praised ad nauseam in the past. The Carbon 4’s most impressive attribute, however, is its weight – a figure Cannondale claims tips the scales at 2118 grams, including the shock. In this particular trim, the full medium bike (without pedals) measured in at 11.40kg. Not too shabby, considering its supposed ‘entry-level’ bent. 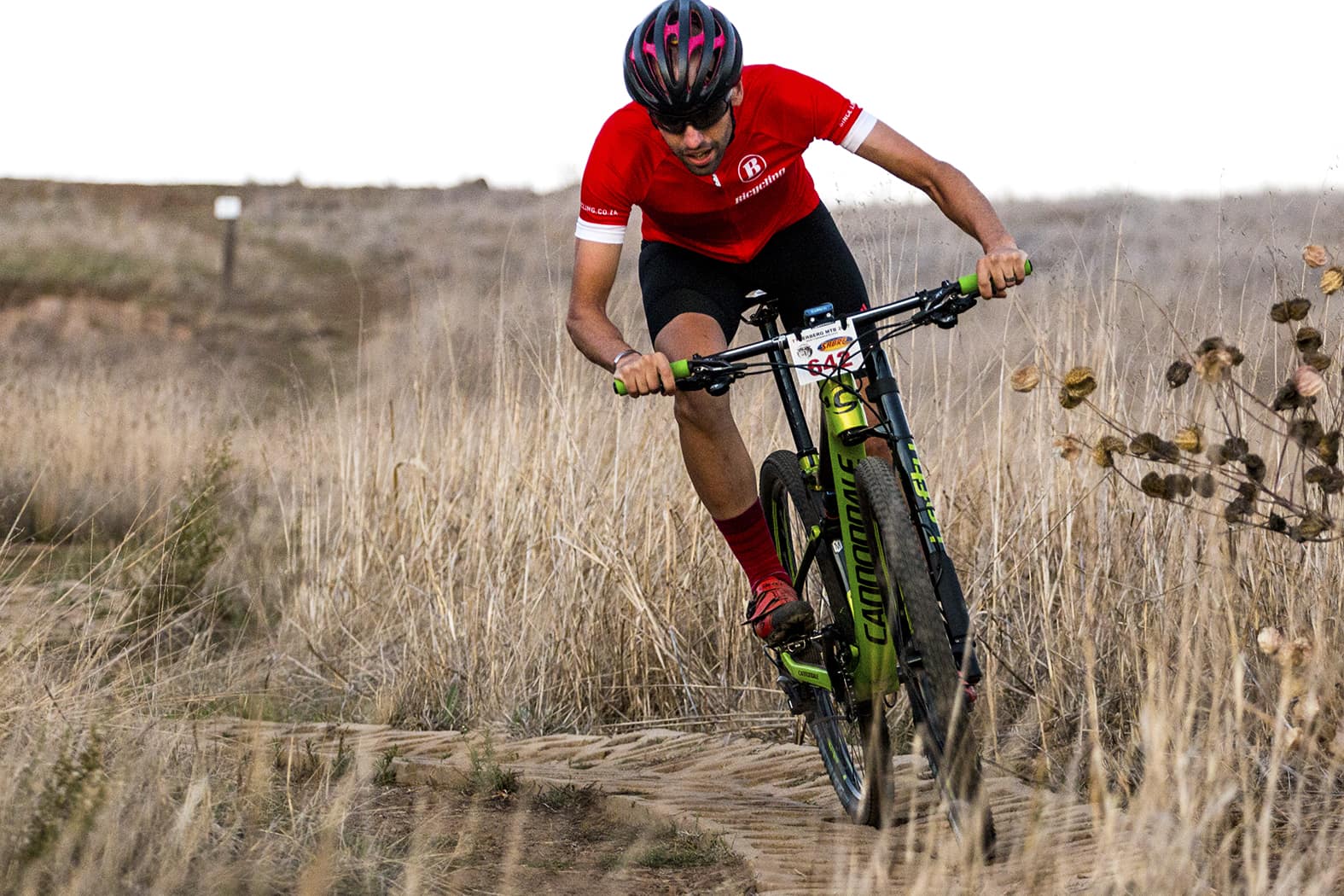 The riding position is definitely more trail-focused than before, with a head angle of 69.5 degrees versus the previous model’s 71.2. Furthermore, the fork has a 55mm offset, and the trail has been lengthened along with the reach, while the chainstays and stem have got shorter. What all this means is that the moment you point the front wheel down your favourite singletrack, you’ll feel some noticeably different nuances in the bike’s behaviour – which brings me to grip… 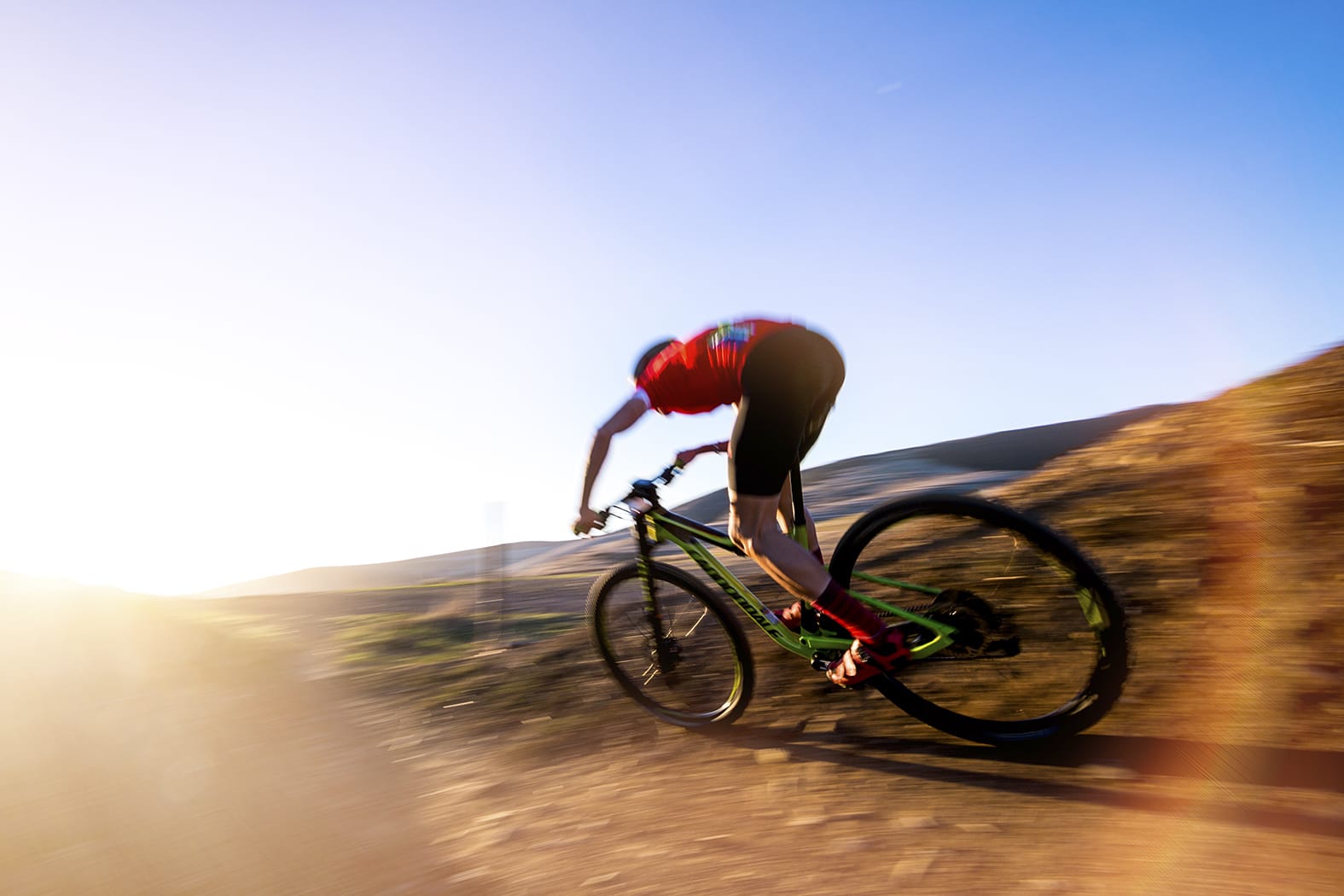 There’s a lot of it. Along with the improved traction, the bike’s propensity for shimmying through switchbacks instils in the rider an incredible amount of confidence – think of the entire experience as a symbiotic relationship, where rider and machine instinctively feed off each other’s movements. The longer wheelbase, slacker ‘OutFront’ geometry and 100mm of suspension (Lefty front/RockShox Monarch rear) also show how much more au fait it is with rolling over obstacles than before. Like the previous model, it climbs like a mountain goat; but it’s also pretty impressive out in the open, where it eats up gravel roads.

So it climbs, descends and rides like a boss? Yes sir. 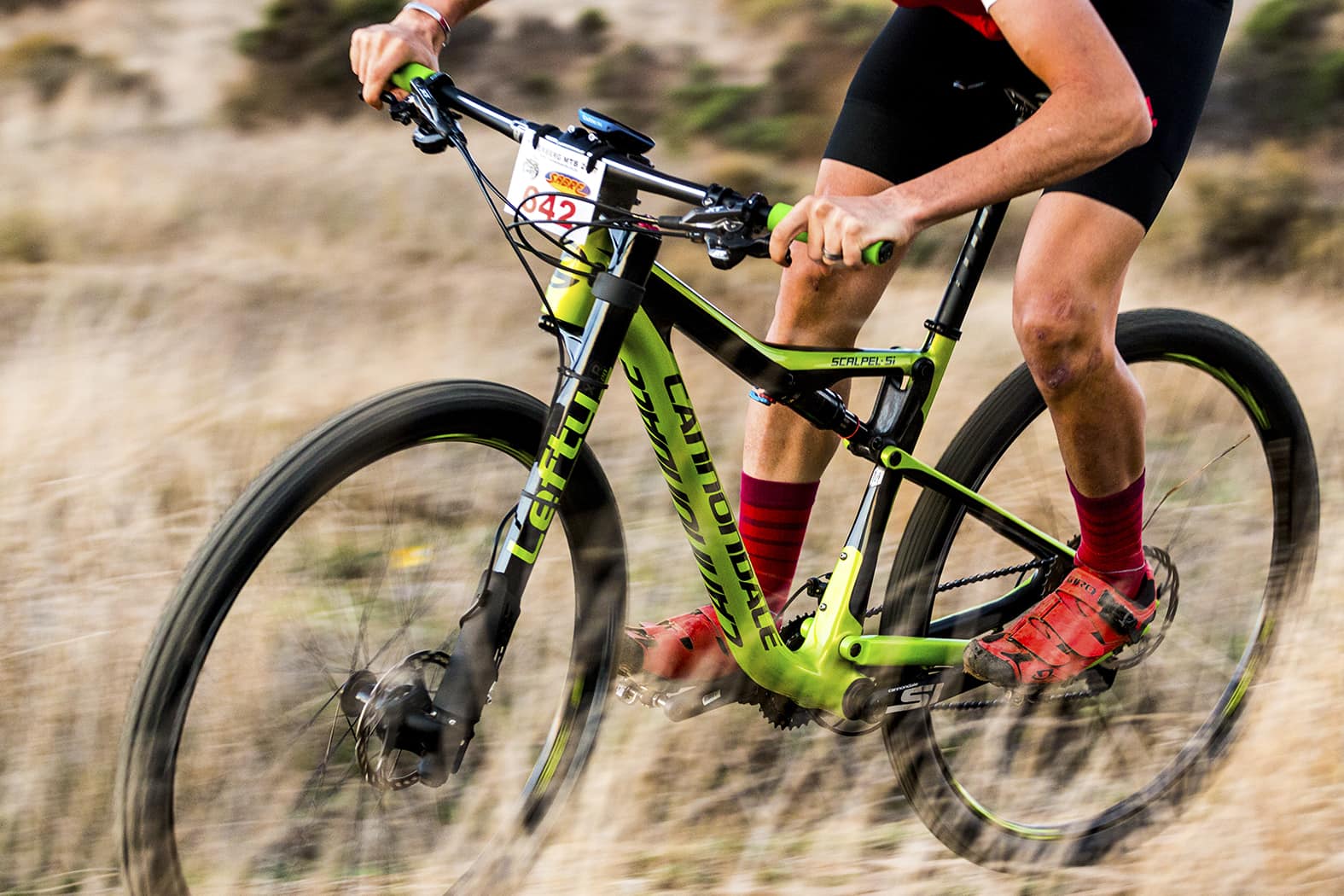 The Scalpel has long been a weapon of choice for competitive riders, both locally and abroad. The new model’s unusual looks, in combination with its plush suspension arrangement and forgiving geometry, mean it’s going to be even more popular now. Even specced as ours was, Cannondale do indeed have a winner on their hands – in fact, unless you’re Manuel Fumic or Maxime Marotte, I don’t think you’ll gain any extra advantage by forking out for the higher-specced (read: more expensive) Carbon 1 or 2 model. The Scalpel-Si Carbon 4 is all you need in a full-suspension 29er MTB.

Besides, if you really want to drop a few hundred grams there’s always the option of going the 1x route by ditching the front derailleur and shifter, and possibly even changing the wheelset. But as far as off-the-shelf race-ready rigs go, the Scalpel-Si Carbon 4 is one of the best options around. Price R65 000. 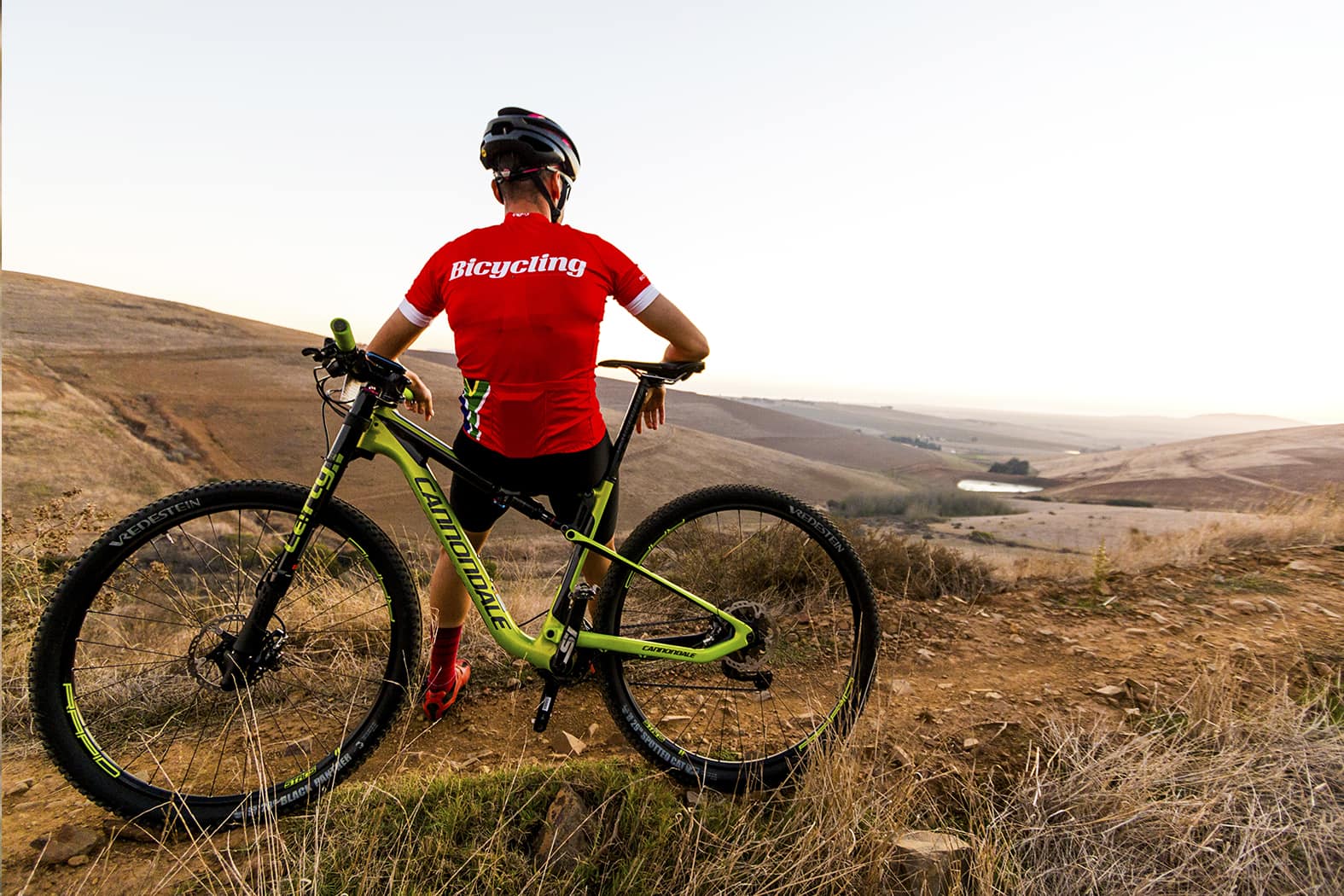