Pirelli's gravel offerings launched in the middle of 2019, and we have been thrashing its Gravel H version of the Cinturato road model for three months.

Pirelli is a recent (2017) entrant into the bicycle tyre game and has wowed us with grippy yet durable mountain bike and road rubber. The French firm’s gravel offerings launched in the middle of 2019, and we have been thrashing (really, we have, this is a hyperbole-free zone) its dry-pack Gravel H versions of the Cinturato road model for three solid months.

The firm offers two versions of the Gravel Cinturatos – the H, or Hard Terrain, and the M (Mixed Terrain). The latter is quite knobbly indeed, and unlikely to find favour in our dry, fast conditions, but will be popular in wetter, more slippery climes. For South Africa, the H is where it is at, on paper, with a fast-rolling centre tread and just enough side knobs to keep you dug into the corners.

GOT A GRAVEL BIKE? Enter the Karooburn today

Our review set fitted easily to both WTB 19mm internal-diameter rims and a set of Eastons with an internal measurement of 21mm – the former offering a 39mm cross-section, and the latter 41mm, from a claimed 40mm. Lots of lovely volume, which translates to nice low pressures off-road, where the supple 127tpi casings come into their own. – light but (touch wood) properly durable, in spite of some of the above-mentioned thrashing. At a claimed 480g – we were in too much of a rush to try them out to weigh them – they are pretty light, too. Pirelli is terribly proud of its proprietary SpeedGRIP rubber compound, “designed to perform in both wet and dry conditions”, according to Pirelli, while apparently “keeping rolling resistance ‘very close’ to the Cinturato road tyre”. After nearly 3 000 KOM-gobbling kilometres on the road in the last month and a half, we can’t fault them on the tar: they even roll quieter than almost all of the gravel tyres we have ridden to date. Run them at 45psi ( not at the maximum 60), and your gravel donkey becomes a grippy racehorse. 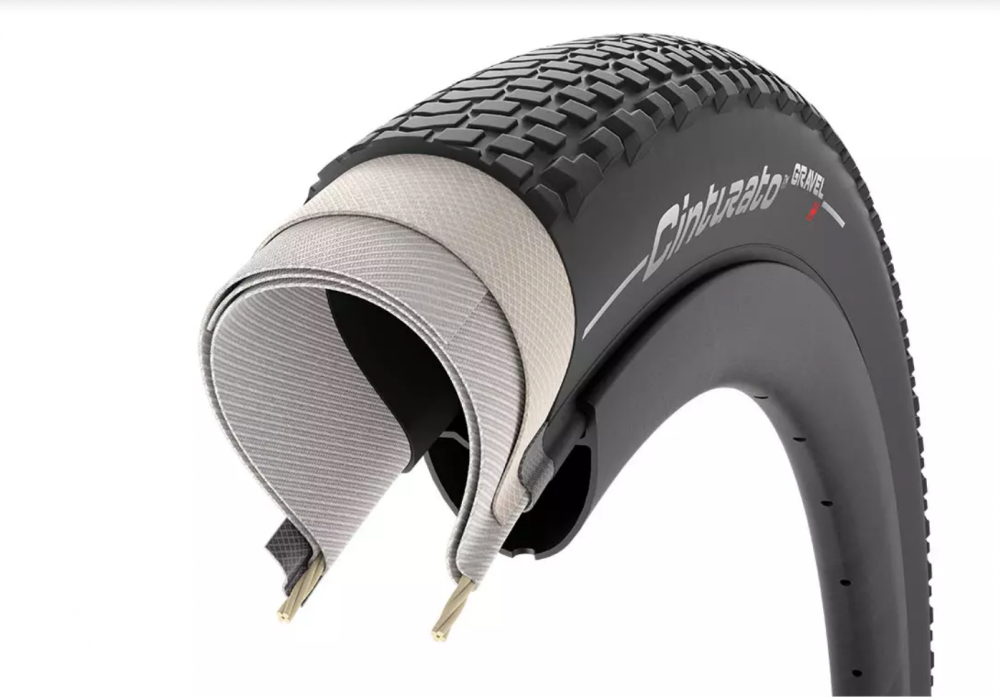 Offroad is where the Cinturatos excel, though. Part of our thrash was a 500km self-supported speed-tour across much of the Crosscape route in December, starting in the pouring rain and finishing in 46-degree heat, on the wide variety of surfaces that route throws up. I didn’t think about the tyres a lot, I have to admit. With a dozen or so extra kilos of luggage, slowing the bike down on the hardpack required a little extra planning – if the Cinturatos share a weakness with all gravel tyres, it is that skinny stuff likes to skid – but cornering and climbing were covered, comfortably, and bombing the dead-straight open-road downhills was done increasingly confidently, with the Gravel H sidewalls showing nary a scuff for even major misjudgements. Once in Plett, the bags were dumped, and it was off to irritate the mountain bikers with a fast, no-dab lap of the Harkerville Red Route – just to test the more adventurous off-road capabilities.

After nearly 4 500km of mixed-terrain riding, the rear is just about beginning to show signs of wear, with a little slippage on the steeper off-road climbs, but the front still looks new. Not bad for a mid-range tyre – but to be expected, I guess, from one of the world’s greatest calendar makers. Sorry, tyre makers.