Your (Initial) Guide to Team Cycling Jerseys for 2020

Let’s take a look at some of the surprising new team jersey changes, and returning favourites fans can expect.

Let’s take a first look at some of the surprising changes to the new team jerseys for the new season, and returning favourites fans can expect. 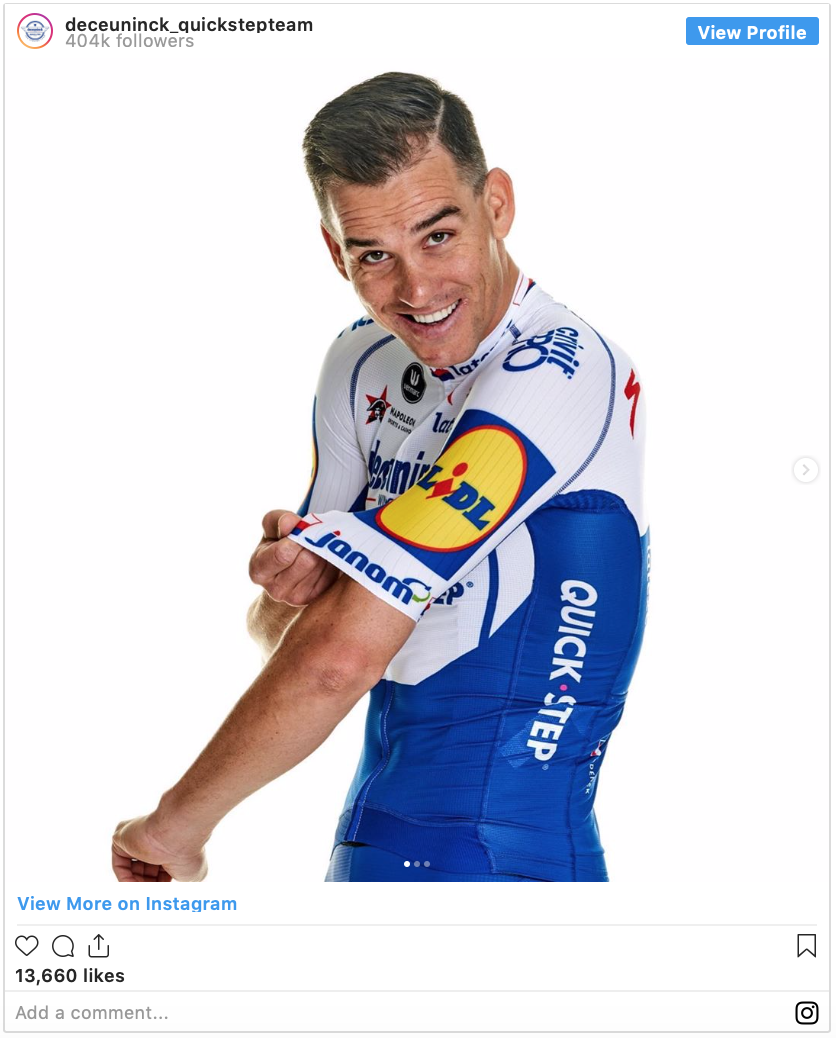 Whether you still refer to the top-ranked UCI WorldTour team as Quick Step because let’s face it, Deceuninck doesn’t exactly roll off the tongue, or the “Wolfpack” team motto, fans will have little trouble spotting the likes of Julian Alaphilippe or Remco Evenepoel as they zoom by. With more than 770 UCI victories to date, minor changes have been made to the traditional blue and white colors for 2020. The team debuted the new design on their team website just before the holidays began. 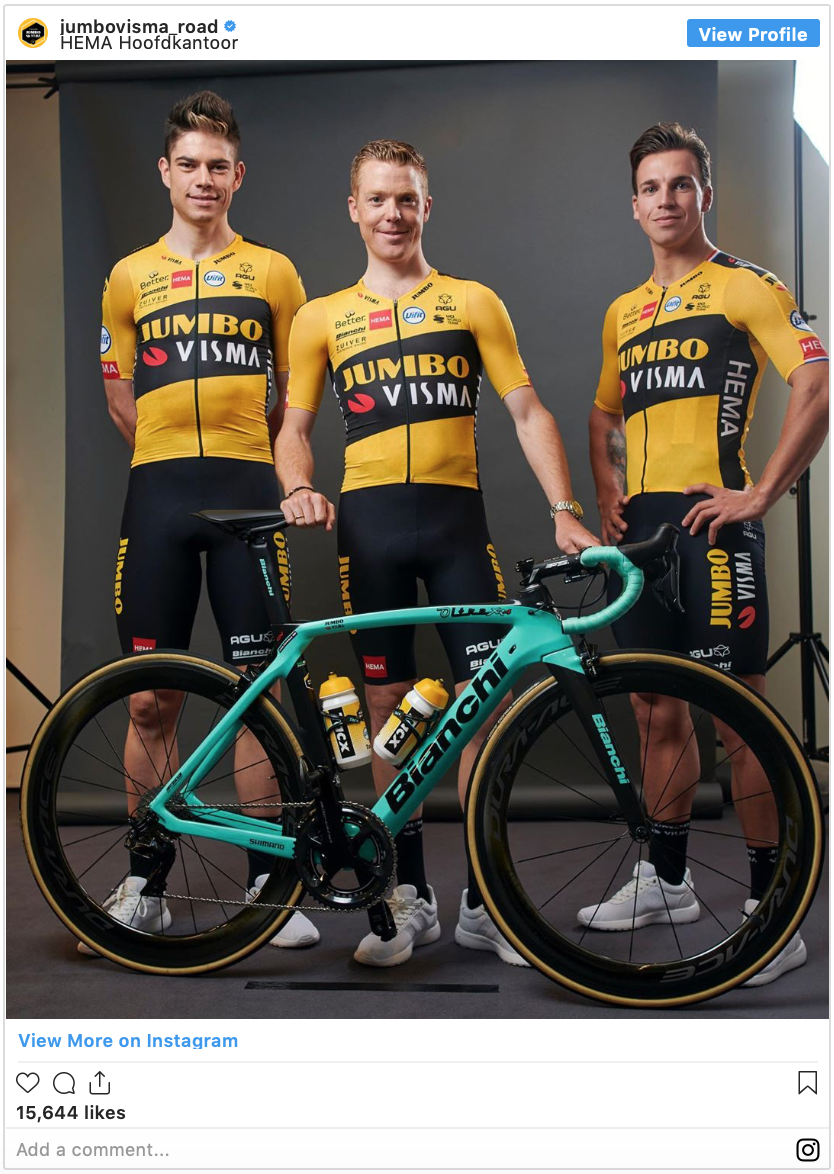 It was arguably the best season to date for the Dutch outfit in 2019. The team celebrated winning the Vuelta a España and was a close second in GC at the Giro d’Italia with Primož Roglič, who also finished the season as the top-ranked UCI individual rider. The team revealed their new jersey online, ahead of their team presentation at their December training camp. The fade to black design has been removed with a solid black strip added across the chest making the title sponsor logo more prominent.

The team announced they are “fully committed” to the Tour de France with new addition Tom Dumoulin sharing leadership duties alongside Steven Kruijswijk and Roglič. 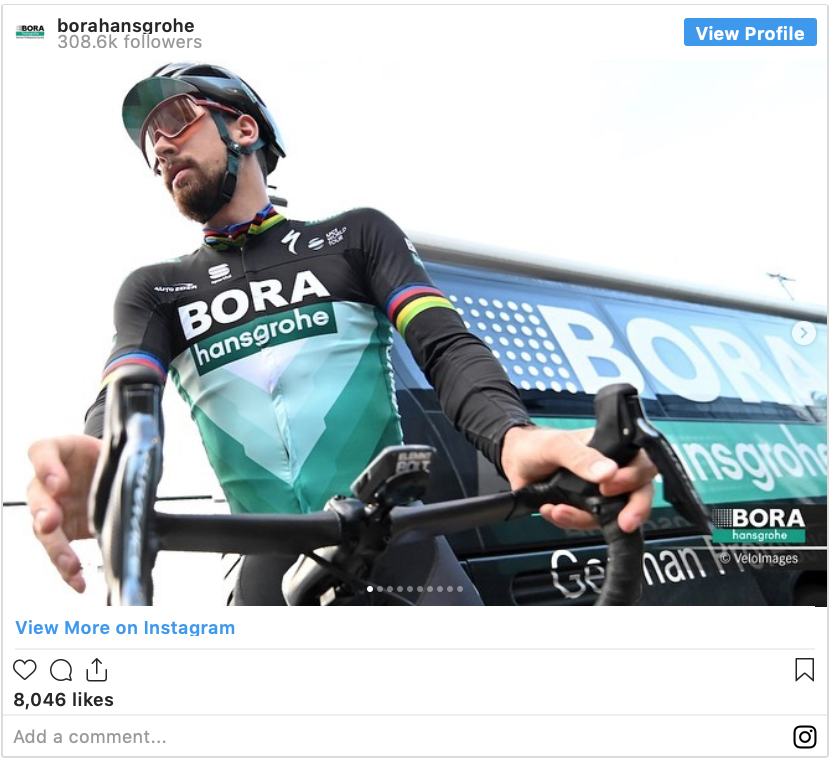 One of the fan favorites from 2019, Bora Hansgrohe saw little need to make any drastic changes in their jerseys for 2020. The team went into the holiday season with a reason to celebrate, announcing its title sponsor, Hansgrohe, has chosen to extend their sponsorship into 2021. The new jerseys were revealed at their team presentation earlier this month, with a second version with added green posted on Twitter during their training camp in Mallorca. The chevrons are a touch more subtle, with minor changes to the Hansgrohe logo. Three-time world champion Peter Sagan will be making his debut at the Giro d’Italia after the cancellation of the Tour of California in 2020 before heading to France in July. 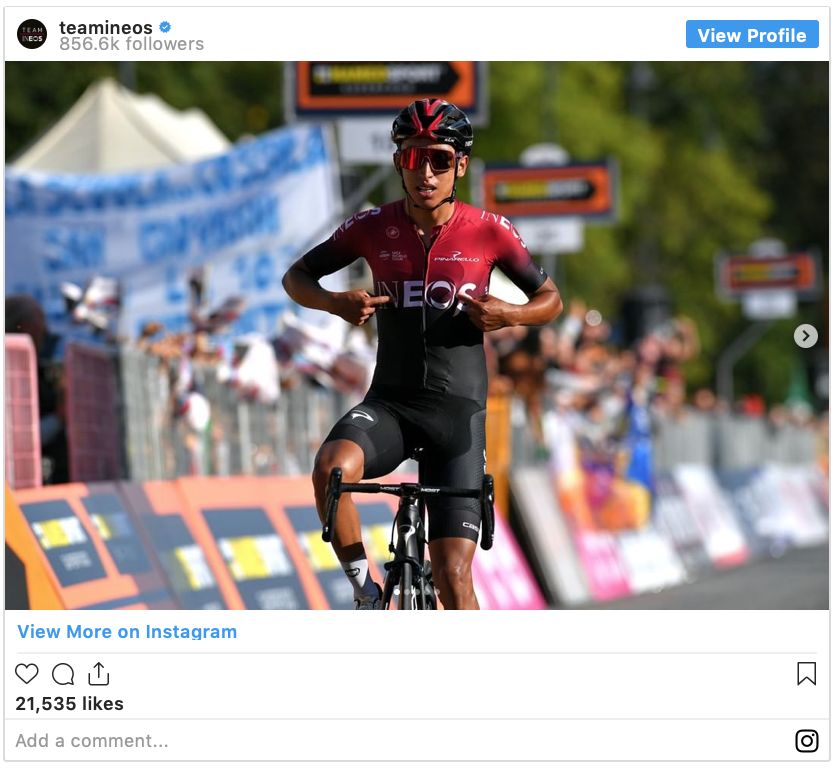 After the new title sponsor was announced in May, preserving their British identity and continuing as the wealthiest team in the peloton, the maroon fade to black jerseys will remain for 2020. The team announced the changes on their Instagram earlier this month. Despite winning the Tour de France with the young Colombian phenom Egan Bernal, the UCI listed the team ranking as sixth on the WorldTour. Powerhouse transfers including current world time trial champion Rohan Dennis and this season’s Giro d’Italia winner, Richard Carapaz, should help move them up in 2020. 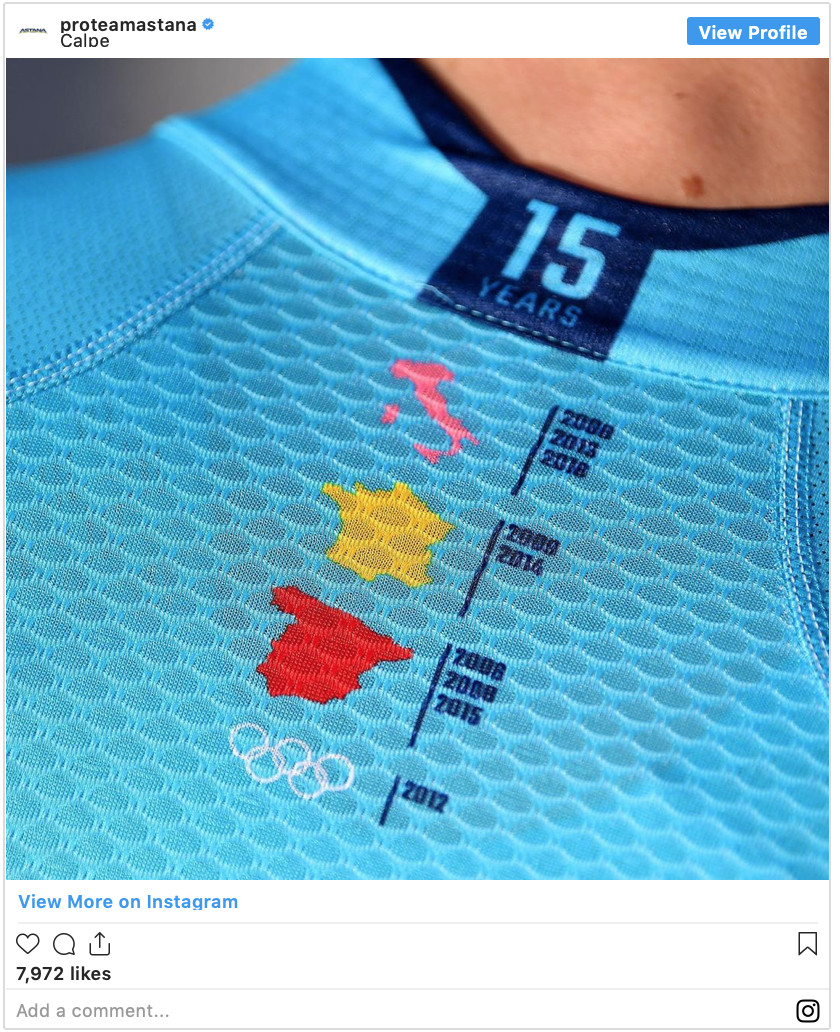 The team will pay homage on their jerseys to Astana’s 15-year anniversary racing in the WorldTour. The new design, featuring the same team colors and design fans are accustomed to, includes the team’s most important wins on the back collar, beginning with General Manager’s Alexandr Vinokurov’s gold medal in the 2012 London Summer Olympic Games to the team’s Grand Tour victories from Alberto Contador’s 2008 win at the Giro up until Fabio Aru’s 2015 victory at the Vuelta a España. 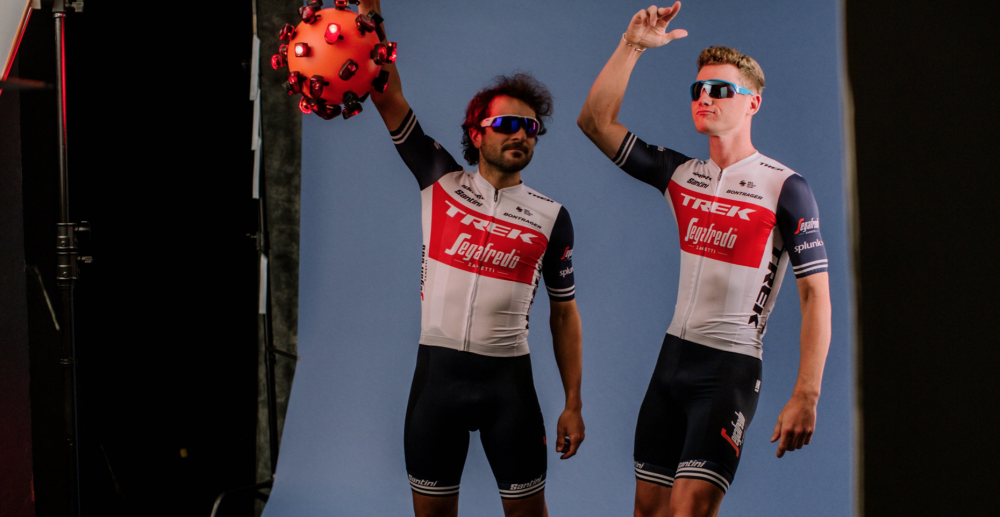 The USA-based team was one of the first to debut their new eco-friendly men’s and women’s kits for 2020. After swapping midseason to a training friendly, predominantly white jerseys, the team chose to keep with the design for the men heading into the new season. The only noticeable changes are added blue sleeves. For the women’s jerseys, only a small pop of red in the Segafredo logo depicts the changes for the new season, making their familiar blue and white jerseys easy to spot for fans. 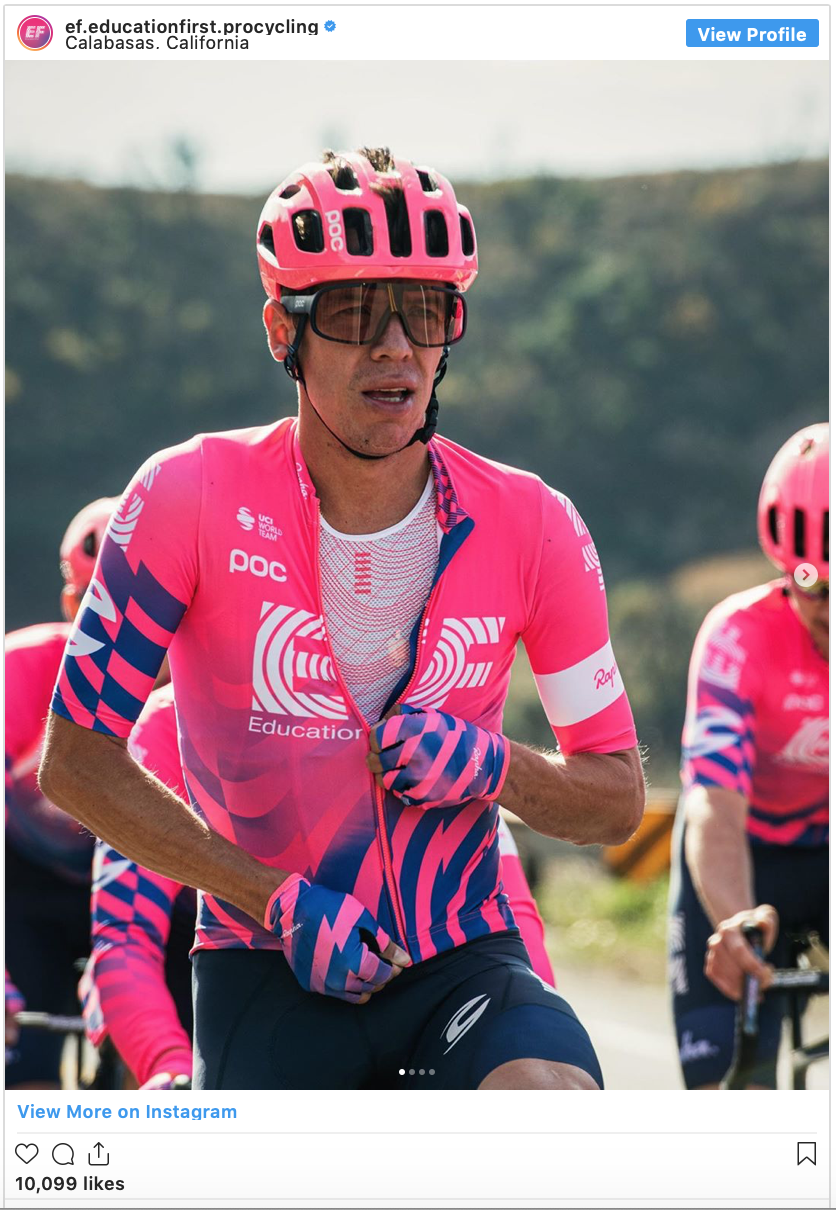 Standing out in their bright pink and blue kits, EF Education First will stick to the same color scheme, departing from the faded gradient design that has been so popular in the pro peloton the past few seasons. The new design makes the Alice in Wonderland Cheshire Cat come to mind with its bright coloured striped coat. The colours make for great training kits and will once again stand out in the rainbow collage of the peloton.

Celebrating four decades of uninterrupted activity on the WorldTour and one of the few to bolster a women’s squad, Movistar keeps with its signature light blue jersey with the white Movistar “M” prominently displayed on the front panel. The popular fade to black motif is given a slight design change to dots for 2020. The team was dealt some tough departures when Nairo Quintana signed with the Pro Continental French squad Arkéa-Samsic after racing eight seasons with the Spanish squad. 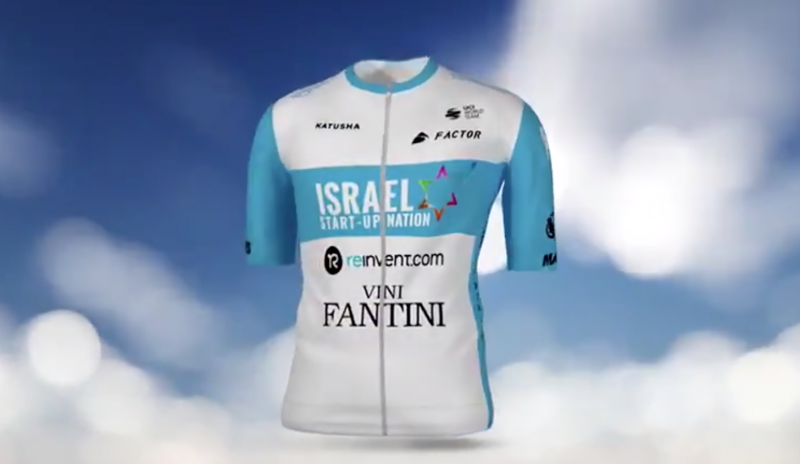 The team from Israel made it official after merging with Katusha, taking over their WorldTour license to become the first Israeli team on the WorldTour. Keeping its signature star, the jerseys look much the same from last season, beyond the obvious name change and added logos. The Katusha logos are placed on each shoulder, along with the front and back placements. Roughly half of the staff from the Russian squad and seven riders made the move to the Middle East, led by Rick Zabel. Factor Bikes, replaces De Rosa on the front panel, as the new bike sponsor for the team. 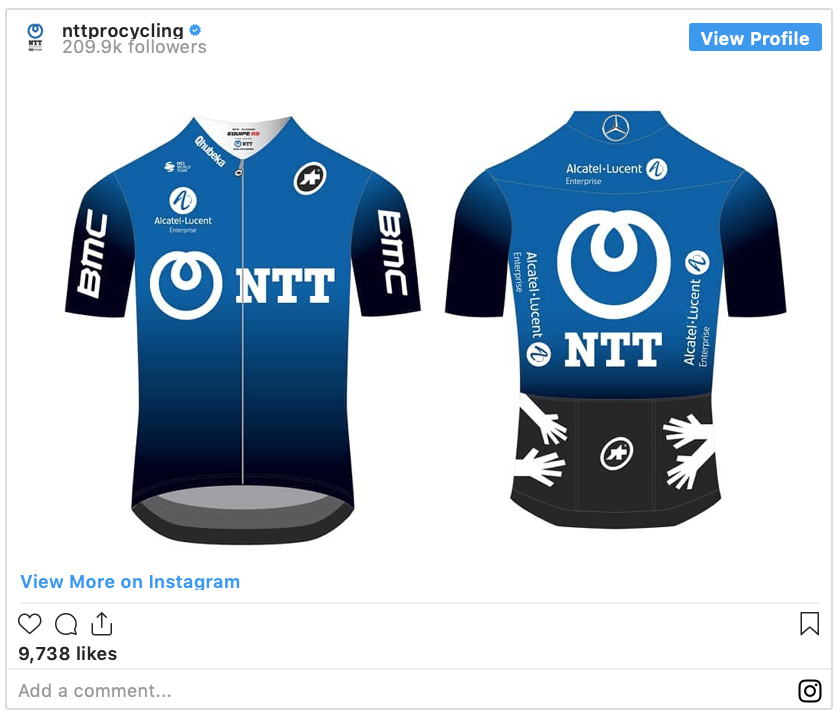 The announcement, made at the home of NTT in Tokyo, Japan, included the jersey reveal in the new blue and black colours of the technology solutions company. The team will continue its mission in sharing the impact that bicycles have in changing lives through their partnership with Qhubeka, which celebrated distributing its 100,000th bike this year. Louis Meintjes, Ben King, and Edvald Boasson Hagen will be a few of the familiar faces debuting in the new colours next season, while legendary sprinter Mark Cavendish announced his departure to Bahrain-Merida.