Lose your partner in a stage race, and you’re discriminated against. That can’t be right. – By Aaron Borrill 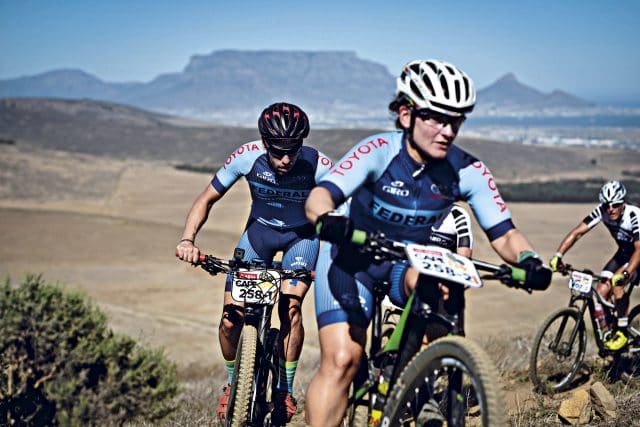 Racing a mountain-bike stage race as a team creates a unique dynamic, as riders battle it out together against rivals and Mother Nature. I’ve participated in myriad team stage races, with both men and women, and they’ve mostly gone well. When things go right, it feels amazing; you barrel through singletrack, and instinctively power up climbs, together on an almost telepathic level.

But when things go wrong, they go south very quickly. And here’s a quandary: while the professionals can tailor their performances by cherry-picking a partner, in the amateur realm this is often not the case.
With amateurs, the hammer and the nail almost never swop roles. This can be quite testing and taxing, on both mind and body. If you’re the stronger rider, suddenly you have a dual role to perform – you’re riding for two, and expending loads more energy as a result.

And when it comes to mixed teams, there’s always going to a pretty large chasm in terms of ability. Men naturally produce more testosterone than women, and are more physically competitive as a consequence. Women, on the other hand, know how to suffer, and are usually (I’m speaking from experience here) better suited to endurance, and at managing their energy outputs. And egos.

I’ve had plenty of fights with my wife on the bike. I’ve been called some unspeakable things. All of which have taken days to repair, but we’ve got to the finish in the end. But would the race have panned out differently if I were riding alone? I’m not saying race organisers should cull the team aspect of stage races altogether – it does after all add an exciting component to racing; but I do think a solo category is sorely missing. And we’ve already seen this policy adopted by the Joburg2C, Trans Cape and the Cape Pioneer Trek, each of which offers solo entries.

But what about the Absa Cape Epic? I recently finished the event alone, after starting it with my wife. Like I said, we’ve raced plenty together, and have done particularly well in the past. But this year was a disaster – a fall at a road race three weeks before the race hampered my wife’s final preparation, and she went into the Epic undercooked.

The disparity between us in terms of fitness was evident from the prologue, and it was a battle every day; until eventually she retired, from severe dehydration and heat stroke.

Was I to blame? Did I push her too hard? Did I expect too much? These are questions every team will be faced with at some point.

When your partner retires from a race such as the Cape Epic, you’re allowed to continue as an individual finisher. But you become what the race organisers refer to as an ‘outcast’ – while you still receive an official time and finisher’s medal, you don’t appear on the GC list. And all outcasts – amateur and pro – can’t progress further than C batch, so as not to interfere with the racing categories.

So why not just create a solo category, and start the group just after the competitive teams? Though it wasn’t of my own doing, riding solo gave me the opportunity to ride at my own pace and manage my energy expenditure each day. I had less stress, not having a partner to manage and worry about.

That said, after a few days of solo riding I began to secretly envy the other teams – their shared emotions, hardships and elation. Before, as a mixed rider, I might have been a threat; but now, nobody cared about me – or even looked at me, for that matter. I truly was an outcast.
So it became lonely. It was very tough, arguably tougher than riding in a team. Though there were other solo riders around me, in a way we were all pariahs.

Surely this wouldn’t be the case if there were to be an official solo category? In fact, most of the outcasts I rode with each day said that they would have preferred riding solo in any event – they had only entered with partners so they could participate at all. Interesting…

The team dynamic has its place in stage racing, especially if you get the balance right. But for those who want to ride man (or woman) alone, perhaps it’s time for all races (even the Cape Epic)
to offer limited solo entries. It’s definitely not the easier option; but it would at least make the ‘outcasts’ feel part of the zeitgeist that defines such an iconic event.

The Epic is now under new ownership. While I have no clue what changes are planned or may transpire, in the not-too-distant future I would like to see a dedicated solo group. As well as the introduction of a new jersey!