When Training Gets ‘Hard’

When the news broke that Team Sky had tested Viagra on their members to inflate performance, no-one took much notice. Except for Jonathan Ancer, our deputy editor… 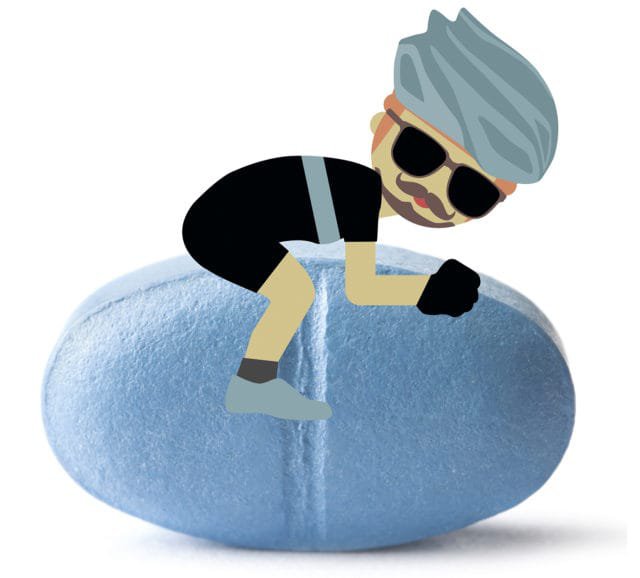 Adrian looked around furtively. We had arranged to meet on Saturday morning, around the corner from where our usual band of weekend warriors gets together for a regular ride.

Adrian shook his head slowly. “These things have a way of coming out.” He held out his gloved hand, to reveal an innocuous-looking pill.

“Are you sure you’ve thought this through?” he asked. I shrugged. I hadn’t, really – but if it was good enough for Team Sky, than who was I to argue?

I popped the capsule casually into my mouth. Now was my chance to show these weekend warriors who was boss. This little pill was not going to give me a ‘marginal gain’ – it was going to give me a massive advantage. I just had to swallow it to feel… swell.

According to the report, not long after Team Sky was founded, they tested the chemical on some of their riders at a training camp. Its effect is to increase the ability of blood vessels to move oxygen around the body.

The magical elixir is not on the World Anti-Doping Agency’s list of banned substances, so I figured I should give it a whirl – especially after I discovered that Adrian takes it for ‘recreational’ purposes. What’s more recreational than cycling? And if it could give me a much-needed lift and force my mates to eat my dust, then so much the better.

Adrian and I headed back to the group, and we set off on our ride as usual.

It occurred to me, as we approached a climb, that one rider who doesn’t need this kind of help is Alberto Contador – he already soars up hills like a Spanish fly. I wondered how mountain bikers would react on this performance-enhancing pill – the rough riders would definitely be chasing some soft-tails.

At first, there were no signs of any extra power pulsating through my body. But suddenly my blood swished around my body, my extremities tingled, and my vision was tinged by a blue tint. It was fortunate I hadn’t taken any iron supplements recently – if I had, at this point I would have spun around and pointed north.

Maybe it was all in my head, but I’m pretty sure my legs were turbo-charged as I sped away from the pack – although I noticed that I was significantly slower than usual going round corners. It also occurred to me that if I crashed, I’d invent a new sport: bicycle pole-vaulting.

This is what I call a HARD training ride, I thought, as we arrived at our post-ride coffee stop.

But that’s when I realised I had a problem. There was no way I could get off the bike. I had discovered that Lycra and Vitamin V are a lethal combo – for how do you keep your top tube in your bibshorts?!

So I’ve figured out the real reason Team Sky tested Viagra on their, um, members. It had nothing to do with its performance-enhancement qualities – it was about forcing their riders to stay on their bikes all day!