The inaugural Tour du Cap took place over five wild, windy days in the Boland in the first week of December. 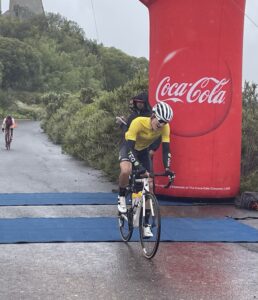 In the women’s race Madeleine le Roux (Sandton City) increased her lead in the yellow jersey competition with a stunning stage win in the final stage. Her teammate Taneal Otto finished second overall while Hayley Preen (Reach for a Rainbow) rounded off the podium. 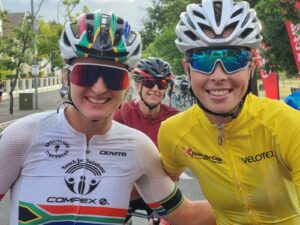 HB Kruger was crowned King of the Mountain while 21-year-old sprint sensation Rickardo Broxham won the points jersey. Broxham also won the first stage, which finished in the heart of Paarl. 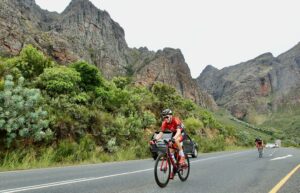 Seasoned pro Dylan Girdlestone rode in his last race as a professional and he was the main protagonist on the final stage, which covered 126km from the Faure Street Stadium in Paarl to the Taal Monument.

Girdlestone went away with a five-man escape group 20km into the race. Their lead over the main bunch stretched to almost four minutes, but it whittled away to just 20 seconds by the time they started the final climb.

He attacked on the climb and looked all set for the stage win until Hatherly passed him agonisingly close to the finish line coming around the final corner.

Sunday’s stage took place over largely flat terrain, with the exception of Bothmaskloof Pass on the outskirts of Riebeeck Kasteel and the final climb to the finish at the Taal Monument on Paarl Mountain.

It was another beautiful stage which gave riders the opportunity of experiencing the Swartland through the towns of Hermon and Riebeeck Kasteel as well as the splendour of Paarl Mountain with a view from the top.

Race Director Wynand de Villiers said the event was extremely well received and provided a world-class racing platform for South Africa’s top professionals. “Due to Covid-19 we haven’t been able to present a top-level stage race for more than two years. The consistent aggressive racing throughout all four stages was amazing and it showed that our professional riders were starved over this period.

“The Boland is in my view the best geographical area to present a road stage race. Road surfaces are good, we have ample passes to ensure variety, and the route support from the municipalities is exemplary. Drakenstein, Stellenbosch and Provincial Traffic were faultless.”

De Villiers announced that the 2022 Tour du Cap will take place on 3-6 March 2022. “The Boland’s signature Tour needs to move back to its historic slot leading up to the Cape Town Cycle Tour.

“We were privileged to present the event this year during a Covid relaxation period, but in the future the event will be hosted in its traditional slot,” he said.