Toyota has expanded its esports repertoire to include cycling, with a Zwift partnership that we can all have fun with.

Toyota has long been a driver of esports development, with its FIFA 2020/Playstation 4 and WRC 9/World Rally Championships Total Esports Challenge activations earlier in 2020. Now, the stage is set for Toyota’s first foray into the online cycling world, as official automotive partner of the 2020 UCI Cycling Esports World Championships, to be held  on December 9. 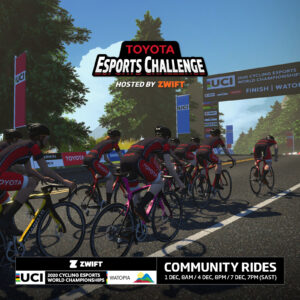 Two UCI Cycling Esports World Champions will be awarded the prestigious rainbow jersey that they will wear for sanctioned cycling esports events in 2021, and South Africa is being represented by Daryl Impey, Ryan Gibbons and Ashleigh Moolman, all of whom performed well in the digital racing world during lockdown.

In addition to the pro racing, Toyota will be hosting three handicap community rides in the lead up to race day; handicap races (also known as chase, cat-and-mouse, or pursuit races) are an exciting alternative Zwift race format. In contrast to the typical category-based race formats, racers in handicap events compete against riders from all categories levelling the playing fields and creating a fun competitive environment which has become the hallmark of previous Toyota e-sport challenges.

READ MORE Everything You Need To Get Started On Zwift

Also in the lead up to the World Championships is the Nations Challenge. The Nations Challenge gives riders the chance to fly their flag and go head-to-head against other countries on the World Championship Course. The average time it takes to complete the race for each country’s event will be calculated and then compared, with a podium announced after the weekend’s action.

Both the handicap races and the Nations Challenge series of races are open to the cycling public through the Zwift platform. Anyone wanting to ride should watch Toyota’s social media channels for further details.

“We are delighted to join as an official partner of this historic sporting event”, said Toyota South Africa Vice President of Marketing, Glenn Crompton. “The unique blend of esports and physical sport is particularly interesting for us.

“The world of cycling resonates well with our customer base while the buzz and appeal of esports present an opportunity for us to reach the next generation of Toyota drivers.”

The Handicap Race will be on the same course the pros race on, on the 9 December: one lap of Figure 8 Reverse. Everyone who finishes will unlock the Toyota jersey as well as having the chance to win one of two 12 Month Zwift subscriptions. Keep your eyes peeled for Toyota’s Ride Leaders and Ambassadors in the Races, they’ll be helping everyone in their group to get to the front and win the race.

Like any handicap race there are timed gaps between the groups for this race, with D setting off first and A setting off last. What’s the goal? To catch the groups in front and get to the line first!
Subgroup handicap times:
D = 0 min
C = + 3 min
B = + 5 min
A = + 7 min

Ride the official race course while listening to tales from legends! Make sure to have your audio on to hear this podcast, which will run at all the various race times during the day. On 3 and 4 December, we will have multiple world champion, Lisa Brennauer, sitting down with fellow world champion, Kristen Armstrong, to chat about getting started in bike racing, the rainbow stripes, and everything in between, and then on 3 and 4 December, it will be the turn of CX stars Ceylin Alvarado and Mathieu van der Poel,

Are you ready for a race like no other? While representing your nation? Get ready to go fast and have fun!

To participate each rider must have both WTRL and Zwift Power accounts!
During the weekend of 5-6 December, Toyota is hosting one race a day, where you can race with other Zwifters in your country as a team. After the two races, the nation with the lowest aggregate time wins the event as well as bragging right for 12 months! The Nations Challenge takes place on the same course as the 2020 UCI Cycling Esports World Championships: 50km on the Figure 8 Reverse course.

Results will be announced on Tuesday, 8 December.