Going Bananas? Science Is On Your Side, For Once.

Bananas are  quick, cheap, portable, and plentiful at organised rides. No wonder we take the humble fruit for granted. Here are all the reasons you shouldn’t.

Bananas are quick, cheap, portable, and plentiful at organised rides. No wonder we take the humble fruit for granted. Here are all the reasons you shouldn’t.

With the arrival of banana flour and banana milk next to the soya and almond varieties on grocery store shelves, it seems the fruit is the latest food to see a popularity makeover. Which is all well and good, but as cyclists we prefer our ’nanas in their purest (and cheapest) form – straight out of the peel.

Bananas are the world’s most popular fruit (scientific study has proven bananas really are the most hazardous of all fruit peels after all) and most are of the Cavendish variety (that’s right, just like the Manx Missile, Mark Cavendish).

Cyclists have long shown the fruit extra love. Bananas’ place in endurance cycling was immortalised in 1887 when New York newspaper writer George Nellis Jr. documented his 72-day cross-America journey on a heavy, high-wheel Columbia Expert in well-known newspapers including the Herkimer Citizen, the Herkimer Democrat, and the Wheel and Recreation of New York City. On Nellis’s 16th straight day of riding, he wrote that a shopkeeper offered him all the bananas he could eat – and for just 25 cents. The hungry cyclist took advantage of the hustle, putting down six bananas immediately. Five minutes later, he ate six more; 10 minutes later, another six. In all, Nellis wolfed down two dozen.

Nellis’s excessive banana nomming might have been an outlier, but bicyclists have been faithful to the fruit throughout the sport’s modern history, too. Bananas were passed out at bike races in Central Park as far back as the ’60s, and tucked into jersey pockets throughout the ’70s and ’80s. In the late 1980s, the Raleigh Banana cycling team represented ‘the energy fruit’ with kits and classic steel steeds emblazoned with the word ‘banana’.

Today, you can show your appreciation with the 3D-printed BaNanaBotCage, a bike-mounted holster with slots for a bottle and a pair of bananas (you can’t buy one pre-made, but you can download the file at myminifactory.com if you’re keen to 3D-print your own). It was designed by Franc Falco, after a cyclist colleague complained of squashed snacks.

Falco’s right: grabbing an overripe banana from your jersey pocket can be… unpleasant (“When you crash – banana goo everywhere,” says Ron Kiefel, seven-time Tour de France racer and Olympic medallist). But bananas are a no-brainer form of racing fuel, an appropriate-for- most-diets form of sustenance, and nothing tops them for beating a bonk. So let’s give the fibrous yellow fruit the credit it deserves. 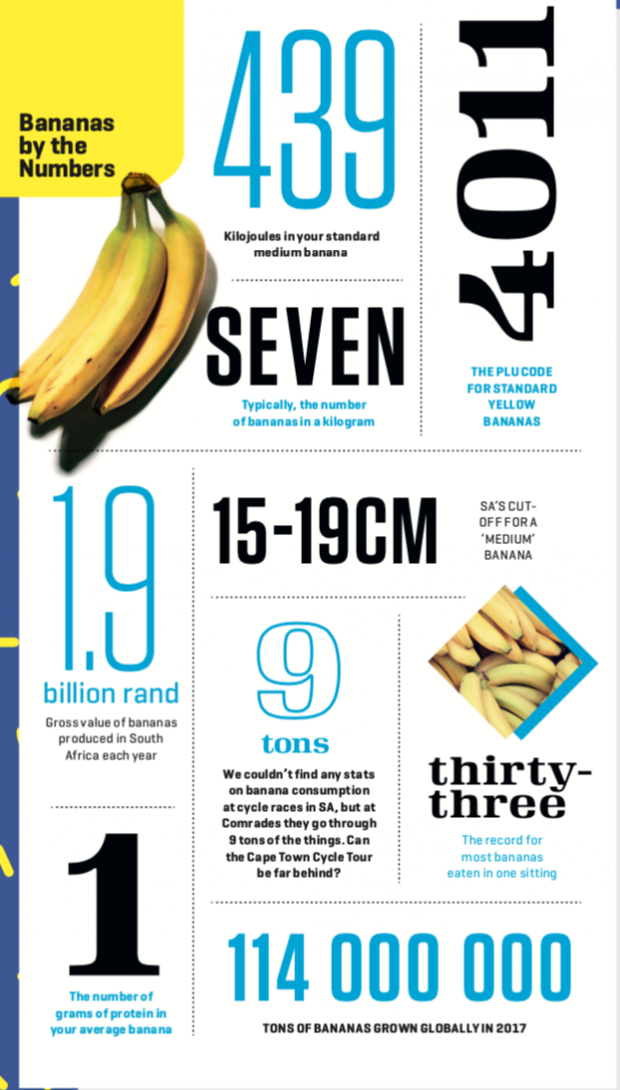 There are bunches of reasons to love bananas, but the top one may be that, for cyclists, there’s never a bad time to eat one. As pre-ride fuel, they contain compounds including vitamin C, and vitamin B6, which can enhance your speed: researchers found that cyclists who noshed bananas before a high- intensity ride were 5 percent faster than those who just drank water.

Tucked into a jersey pocket, a banana will ripen as you ride, thanks to your body heat. As the fruit softens, its glycaemic index (GI) – the rate at which its carbs affect your blood sugar levels – increases. That means by mid-ride, you’ll have a slightly browningbanana that will give you a quick energy jolt. And unlike many processed sweet treats, bananas aren’t harsh on your stomach, and they clock in at around just 439 kilojoules per medium fruit.

After a hard ride, bananas can help you bounce back faster. In a small 2018 study published in PLOS One, researchers compared bananas to water and sports drinks in terms of athletes’ post-exercise recovery. They found bananas matched sports drinks when it came to replacing nutrients and preventing post-workout inflammation, which spurs muscle soreness.

Bananas aren’t just beneficial on ride days, though; you get perks each time you peel and eat one. Here’s what you’ll get every time you eat like a monkey:

One medium banana contains 422mg of potassium – about 12
per cent of your recommended Daily Value of the electrolyte.
The nutrient sends signals along your nerves to help power your heart and other muscles, says dietician Natalie Rizzo. Potassium also regulates the amount of sodium in your body. The mineral can also keep you from feeling weak and tired and may even contribute to fewer cramps, though bananas aren’t necessarily cramp crushers. “Muscle cramping is a multifactorial issue, with no one cause or solution usually,” says  Bob Seebohar, a sports dietician, exercise physiologist, and endurance coach.

One medium banana has three grams of filling fibre (about 10 per cent of your suggested
daily intake), which slows your absorption of sugar and keeps you feeling full. Bananas also contain prebiotics, a type of fermentable fibre that helps the good bacteria in your gut (better known as probiotics) thrive. These beneficial bugs may improve digestion, lower some risk factors for cardiovascular disease, and even aid in weight loss by promoting satiety.

How the hell can a solid food aid in hydration? Potassium plays a part here by helping regulate the balance of fluids in your body, especially the electrolytes you lose (e.g. sodium, magnesium, and calcium) after a ride. Moderate to intense activity can cause small cellular fluctuations in potassium, which is why athletes are encouraged to eat potassium-rich foods to counteract these imbalances, according to the International Society of Sports Nutrition.

This mineral plays a key role in processing carbs and fats for fuel. When you ride hard, you pee and sweat out so much magnesium that you need up to 20 per cent more than you normally do. A single medium banana has 32mg of magnesium; about 10 per cent of women’s daily recommended amount (or about 8 per cent of the 400mg needed by men).

This feature first appeared in the November/December issue of Bicycling SA, onsale now. 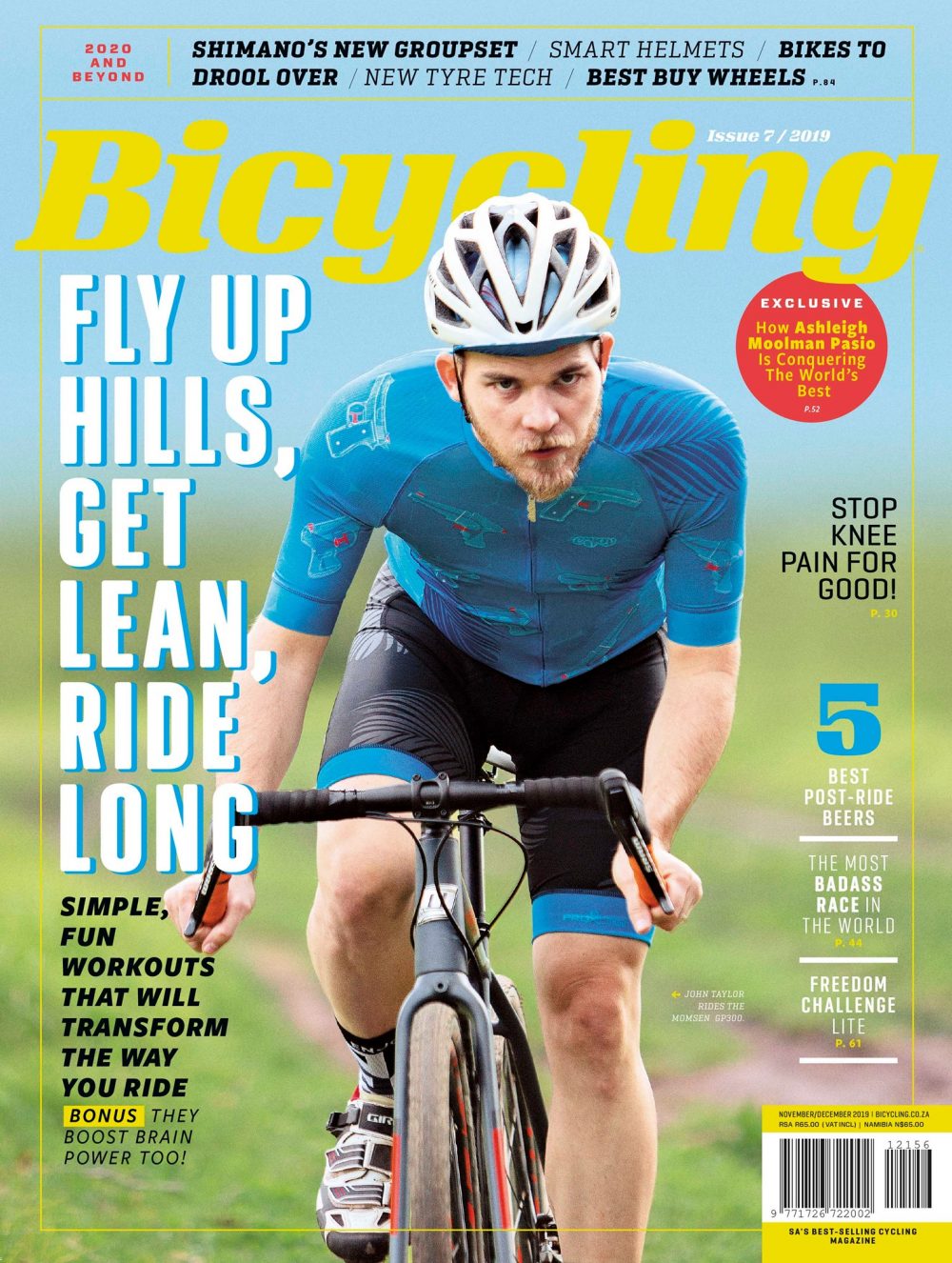