A 22.5km individual time trial in Marseille should deliver Froome his fourth Tour de France and decide which riders will join him on the podium in Paris.

A 22.5km individual time trial in Marseille should deliver Froome his fourth Tour de France and decide which riders will join him on the podium in Paris. – By Whit Yost 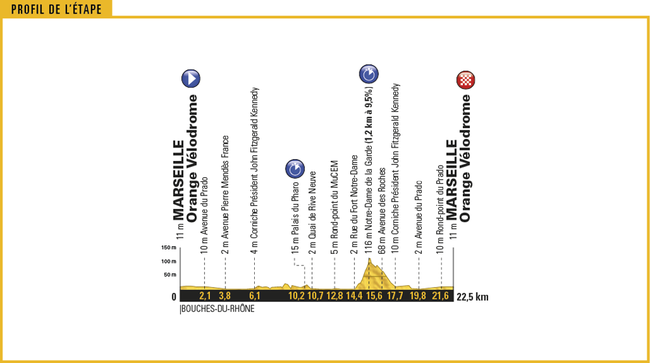 The past few Tours have ended in the mountains, but this year’s concludes with a short individual time trial in downtown Marseille. The course is short at 22.5km, but is by no means straightforward. First of all, it’s incredibly technical, with lots of bends, corners, and roundabouts for the riders to deal with. There’s also a short, steep climb to the 17th-century basilica of Notre Dame de la Garde after the riders have completed about two thirds of the course. Wind could also play a role as much of the course takes the riders along Marseille’s Mediterranean port.Katusha Alpecin’s Tony Martin is the favourite to win the stage. The German is a four-time world time trial champion and has won four Tour time trials throughout his career. He came up short on Stage 1 in Düsseldorf and will certainly be extra motivated to end his Tour with a stage victory. Keep an eye on LottoNL-Jumbo’s Primoz Roglic, the former ski jumper who won Stage 17 on Wednesday. The Slovenian is a terrific time trialist: he won the final time trial at the Tour of Italy last year and has already taken victories in three time trials so far this season. Clearly in-form, don’t be surprised if he upsets Martin in Marseille.As far as the Tour’s General Classification is concerned, Team Sky’s Chris Froome should extend his lead in Marseille, with the real battle taking place among the riders behind him. Romain Bardet, Rigoberto Uran, Mikel Landa, and Fabio Aru are all within 1:32 of one another, and any two of them could join Froome on the Tour’s final podium with a fast ride Saturday. On paper, Uran is the strongest time trialist of the four and should occupy one of those two spots. The weakest might be Bardet, who will need the time trial of his life to preserve his place inside the Tour’s top three.