The Tour's final stage begins with champagne toasts, and ends with a fantastic field sprint.

The Tour’s final stage begins with champagne toasts, and ends with a fantastic field sprint. – By Whit Yost 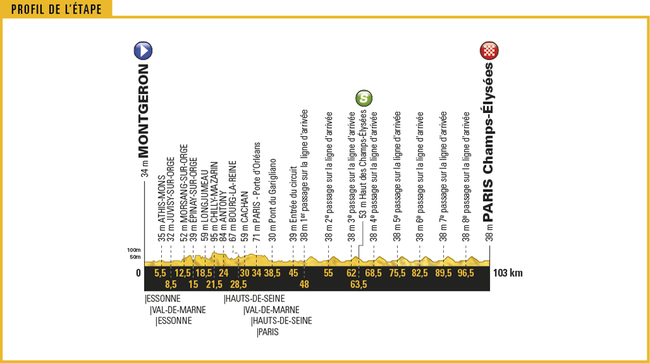 The final stage of the 2017 Tour de France begins in Montgeron, the town that hosted the start of the inaugural Tour de France way back in 1903. Back then, the stage covered an incredible 467km from the outskirts of Paris all the way down to Lyon. This year’s competitors will ride only 105km, most of which take place on the traditional finishing circuit along the Champs-Élysées.RELATED: 14 Questions You’ve Always Had About the Tour de France
The stage begins with champagne toasts and photo opportunities for yellow-jersey holder Chris Froome and the other riders wearing one of the Tour’s four leader’s jerseys, but ends with the most intense field sprint of the Tour. Contenders for the stage win include Lotto Soudal’s Andre Greipel, who would love to repeat his victory on the final stage of last year’s Tour de France, and Team Sunweb’s Michael Matthews, who hopes to show everyone that his victory in the Tour’s green jersey competition had more to do with his legs than Marcel Kittel’s DNF. And keep an eye on Cofidis sprinter Nacer Bouhanni, who’s about to finish his first Tour de France. A win for the Frenchman would put the finishing touches on a fantastic Tour de France for the host nation.RELATED: Drool-worthy bikes from the 2017 TdF… Plus the bike they all want to avoid!