Eight days, 624 kilometres and 16 650 metres of climbing – the bare statistics tell less than half the story.

From the iconic slopes of Table Mountain’s National Park – to the craggy shoreline of the Southern Coast. And on; traversing the famous Winelands and beyond into the high mountains of the Western Cape. The 2019 Absa Cape Epic route challenges, rewards and offers spectators the most revealing view of the Untamed African MTB Race yet.

Eight days, 624 kilometres and 16 650 metres of climbing – the bare statistics tell less than half the story. Rugged mountain trails, bone jarring dual tracks, windswept gravel roads and, yes, sand lie between the Prologue at the University of Cape Town and the Grand Finale at Val de Vie Estate. This is a reflection of modern Africa, where urbanisation spreads to the edge of wilderness – where riders will roll out of celebrated towns, straight into the hinterland where heaven and hades are the opposite sides of the same coin.

In 2019 three stages battle for the honour of being dubbed the Queen Stage. The remaining days are anything but easy however; true to form even the shorter stages pack a significant punch. Take the Stage 4 time trial for example, it is filled with Elgin’s best loved singletracks but each is linked to the next by a ferociously steep climb.

This will be an Absa Cape Epic where form, mental and mechanical preparation are rewarded. An Epic where each weakness will be magnified and luck will need to be made. For general classification contenders and riders seeking to challenge their own preconceived limits alike it will be a race to remember… 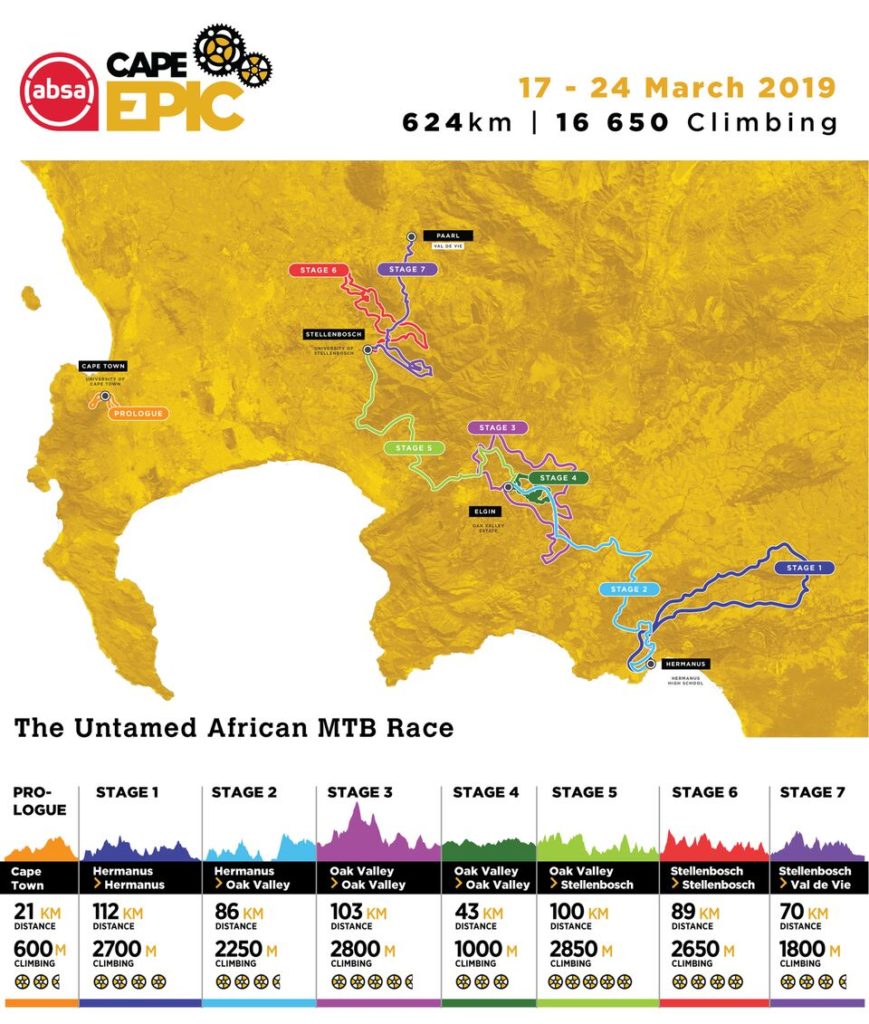 In 2019 Cape Town’s most iconic landmark plays host, for the fifth time, to the inaugural stage of the Absa Cape Epic. The Prologue is more than just a scene setter though; it will provide the first shake-up of the general classification and hints of who has prepared best for the herculean task at hand. 21 kilometres long, with 600 metres of climbing, it takes in the now infamous “climb which cannot be named in print” the grind up to the cauldron of spectators gathered around Dead Man’s Tree and the scenic vistas of Table Mountain Road, all forming part of Table Mountain National park.

The first section of Land Rover Technical Terrain of the race is located on the Plum Pudding Singletrack which tests bravery and skill in equal measures. Expect the UCI men’s and women’s teams to blitz the course and the time gaps to be calculated in seconds. But know that further down the field, surviving the Prologue unscathed should be the aim for the day – the Absa Cape Epic really begins on Monday in Hermanus.

Heaven and Back to Earth

Relentless. Attritional. A return to the Absa Cape Epic Stage 1’s of old and the Hemel en Aarde Valley. Rotary Drive, the La Vierge stairs and the Paddocks set the tone for a day of relentless ascents before the day’s first spectator point at Creation Wines. Then it is onwards and upwards towards the Dimension Data Hotspot near the summit of the Katkloof Climb. Baked by the summer sun it will be littered with loose pebbles, clinging precariously to a shifting sand surface.

In the wheat fields of Overberg, rolling roads provide momentary respite before the war of attrition resumes on the slopes of the Babilonstoring Mountains, then descending into the Tesselaarsdal Valley – where in 2017 many an Epic dream was dashed. Turning for Hermanus and home it is downhill in theory – but reality and Charley’s Babe have other ideas. The Gorge, in the final fifteen kilometres provides the day’s Land Rover Technical Terrain and one of the most exhilarating approaches to an Absa Cape Epic finish line yet. There is still one final sting in the tail though; the Water Works climb, designed to bring a tear to eye of those who failed to prepare.

A teaspoon of cement is in order for the first move day of the 2019 Absa Cape Epic, as it packs challenge after challenge into its relatively brief 86 kilometres. Tyre choice and pressure are sure to be decisive on Stage 2 where 10 arduous kilometres within the first half of the day could prove definitive. The stage starts with an ascent of Rotary Drive before crossing out of the Hemel en Aarde Valley to the west – into the sandman’s playground.

Dubbed The Machine, for the mysterious landowner known only by that moniker, it provides a steep ascent followed by the day’s Land Rover Technical Terrain, a rollercoaster ride along a trail carved out by motocross bikes. The key point of the stage is a brand new singletrack, cut into the Hottentots Holland Mountains by Wildekrans’ Braam Gericke. This 6 kilometre long climb gains over 500 metres in elevation and has been named the Wildekrans Tokoloshe.

No Absa Cape Epic sojourn in Elgin would be complete without an assault on Groenlandberg. But in 2019 the famed emerald mountain, though the highest point of the route, does not earn the honour of being titled the Queen Stage. Overshadowed, slightly, by Stage 5 it still provides a stern test. The day kicks off with the ascent of the Nuweberg, followed by the Groenlandberg herself. For the elite riders crossing the highest point in the race, at 1 100 metres above sea level, first will yield a cash prize for the Dimension Data Hotspot award.

A white knuckle descent follows, then it’s upwards again on the stage’s Land Rover Technical Terrain climb to Die Nek. In the Elgin Valley, far below, a mix of rocky singletrack, concentration demanding dual track and two more infamous climbs await. There are riding rewards on offer too, following the last significant climb of the day, on the initially rocky but always thrilling Lebanon trails. Then the trail home follows the easiest possible route and includes flowing singletrack through cattle filled pastures, not a bad way to end the day with the second largest accumulated altitude gain in the 2019 Absa Cape Epic.

After three marathon stages the 2019 Absa Cape Epic route provides some relief in terms of distance, but the singletrack filled race against the clock will certainly not ease up on the difficulty. The allure is rather one of a shorter day in the saddle with more recovery time. Taking in the best of Oak Valley and Paul Cluver’s plethora of world class trails, but linking them with savage climbs the mid-race time trial provides a test of power, speed and concentration.

Trails like Pine Singles, Tranquillity, Nürburgring, Mamba, Vissie’s Magic, Sounds of Silence, Wonderland and the Greenhouse Effect, are linked by climbs like Tierkop, Ma se Gat, Berg Adder, Puff Adder along with a 350 meter long beast. For the fans the time trial provides the perfect vantage point, the Paul Cluver Amphitheatre. The route forms an irregular figure of eight, crossing over at the Paul Cluver Bike Park; this provides spectators with the chance to see their favourite riders at kilometres 6 and 20 without having to move locations.

Overcoming gravity and fighting to maintain momentum are the orders of the day on the Queen Stage of the 2019 Absa Cape Epic. Though similar statistically to Stage 3, in reality Stage 5 is by a considerable distance the toughest stage of the race. Rugged terrain and brutally steep climbs ensure it has the topography to prove decisive in the battles to be crowned Kings and Queens of the Absa Cape Epic. Out of Oak Valley the Nuweberg sets the scene for a challenging day, before the A to Z trails lead riders to the summit of the Gantouw Pass.

While portaging down, heed the wagon wheel scars cut in the stone and acknowledge how easy life has become since those pioneers hauled ox wagons over the mountains. At the foot of the pass the hidden Lourensford Valley provides the chance for on-the-bike recovery before the toughest climb of the race. Snaking its way up the Helderberg, King’s Climb could work its way into Epic folklore in a single outing. At the summit the Dimension Data Hotspot awaits, followed by the Land Rover Technical Terrain – down the scintillating Helderberg Trails singletrack. Four sapping vineyard climbs separate Helderberg Farm from Stellenbosch, but the Dornier and Mont Marie trails provide respite in between; before G-Spot caps a day well spent in the mountains.

The old saying goes that there are only two certainties in life: death and taxes. When mountain biking in Stellenbosch another two can be added: singletracks and vineyard climbs. Play day, or earn the right to play day; Stage 6 of the 2019 Absa Cape Epic starts with Heart Break Hill inside the first kilometre. Then it is onwards and upwards, because Botmaskop needs to be conquered in order to earn the right to swoop down Skyfall. No circumnavigation of the Banhoek Valley is complete without Nik Naks, a technical climb and descent.

The climb to Tokara on the Simonsberg follows, before descending into Rustenberg Wines. An inexorable grind with a name stolen from the singletrack at its summit – Never-Say-Neverender – traverses Rustenberg, Quoin Rock, Delvera, and Uitkyk where after the Simonsberg Trails reward with singletrack descents. Across the valley Klapmuts Kop and the stage’s Land Rover Technical Terrain awaits, on a rocky but flowing switchback descent. The route back to Stellenbosch takes a lower line but still requires climbing all the way back to Botmaskop, where the final thrill of the day is provided by the revitalised World Cup Downhill track from the late nineties.

No procession through the Winelands the final stage of the 2019 Absa Cape Epic still provides opportunities for general classification shake-ups. From Stellenbosch to Jonkershoek the asphalt road surface provides a deceptive lull, but do not be fooled once in the reserve the typical Absa Cape Epic terrain resumes with vengeance. A dual track climb thins the field for Bosluis. Then it is across the valley to climb Never Ending Story. The best of Jonkers is showcased by Bennet’s Red and the Land Rover Technical Terrain: Armageddon.

From the valley floor the only way is up, on Fiona’s Beast, beyond a fairy tale castle to Botmaskop and through the culvert to the slopes of the Simonsberg. Vuurberg’s dirt jumps, which the route weaves between, lead to Boschendal’s Inferno and Sugar Bowl trails. One final climb and a brand new section of singletrack ensures riders will enter Val de Vie Estate, the Champs-Elysées of the Absa Cape Epic, with a smile, but in need of those last few – mercifully flat – kilometres to gain their composure. Emotions are sure to spill over still; rolling across the finish line – as a 2019 Absa Cape Epic finisher.