A Journey to the Top of the World

Now in its 14th year, the 7Weekspoort MTB Challenge is undoubtedly one of the most picturesque races on the Western Cape calendar, says Bicycling online editor

Jan-Paul Gerber leads a select group of riders up the Seweweekspoort during the 2017 Ladismith Cheese 7Weekspoort MTB Challenge. Photo by Oakpics.com.

Now in its 14th year, the 7Weekspoort MTB Challenge is undoubtedly one of the most picturesque races on the Western Cape calendar, says Bicycling online editor Aaron Borrill. 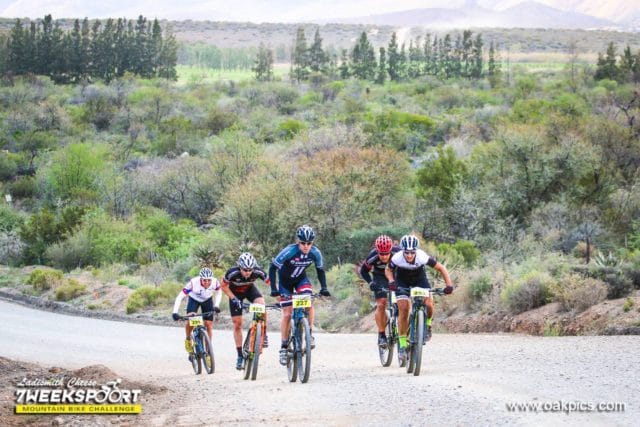 Route 62 has to be one of the prettiest stretches of road in the country, and quite possibly one of its best-kept secrets. Fact – it’s just beautiful out here. Punctuated by stunning mountainous backdrops and unique fynbos vegetation, the scene is like something out of an American movie – such are the aesthetics of the landscape. My destination? Ladismith, for the annual 7Weekspoort MTB Challenge. It might be one of the smallest dorpies in the country; but as hosts of this annual cycling festival, the town and its people sure know how to put on a show. 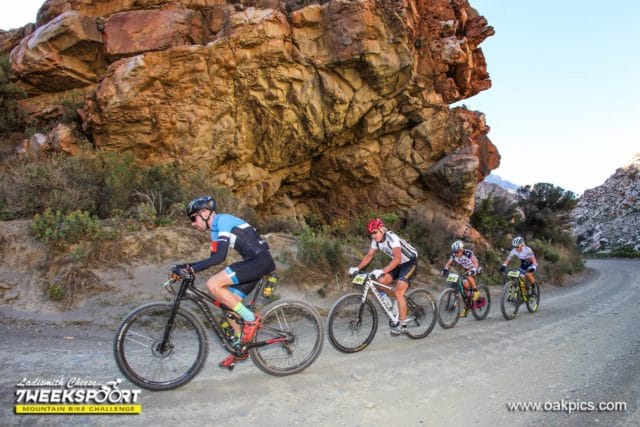 After missing Karoo2Coast two weeks ago thanks to a bacterial sinus infection, I was a little unsure as to how I’d fare, or even approach the 85km of off-road riding. The race does start with a climb, after all… a climb up the rugged Seweweekspoort Pass, rising 500m over 17km. Not the toughest gradient, no; but pace always determines the difficulty of any effort. A notion affirmed by two-time runner-up David Garrett of Team Giant, who made it clear that it’s always flat-box from the gun, and warned that this year wouldn’t be any different. Lining up with him were Yolande de Villiers and reigning SA XCM champion Robyn de Groot. 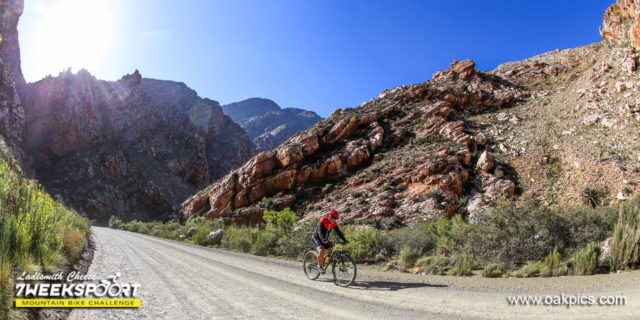 As Garrett had predicted, hammers were dropped from the start, and a group of 11 riders broke away immediately. We were warned that because of the wind-swirl factor up the Poort it would be imperative to stay within the confines of a bunch, to save energy and work together against the wind. However, before we entered the start of the Poort proper – at around the 6km mark – a large patch of sand wreaked havoc. Riders went squirming in all directions, causing yet another split and creating a front group comprising Garrett, Yolande de Villiers, Iniel Hattingh, Jan-Paul Gerber and Kobus Barnard. While they disappeared into the distance, SA XCM champ Robyn de Groot and I formed a mini-break when things started to get a little rougher and steeper towards the summit, and subsequently left several stragglers behind. Needless to say we never saw them (the stragglers) again, as we started to up the pace and rotate on the front in an attempt to bring back the leaders. 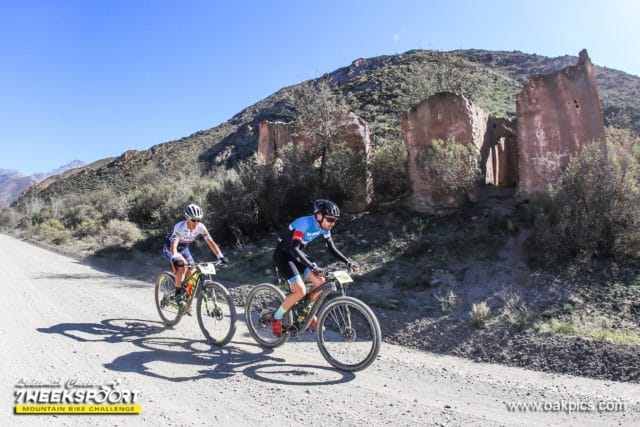 The descent down the Poort was truly special… and fast. While there wasn’t much time to sit back and admire the spectacular views, the cliffs (topping out at 2325 metres) are imposing and ominous, gazing below like sentinels guarding hallowed ground. This pass is yet another example of the engineering wizardry of Thomas Bain, who constructed it to help farmers enter the Great Karoo region. We were careful not to spend too much energy hammering it down here, riding within ourselves – for a number of reasons. Number 1: neither of us had done this race before, and had no idea what to expect; and number 2: like most marathon-style races in South Africa, this one apparently has a sting in the tail… 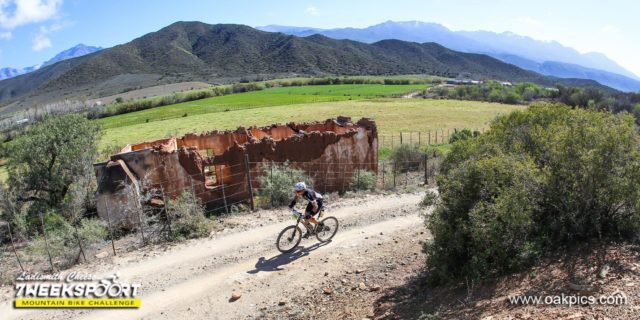 As many will attest, the race only really starts at the base of the Poort; the remainder of the course traverses an undulating trajectory through farmlands, with steep kicks in gradient and sharp descents. After the swirling wind up the climb, the remaining 35km is even more exposed to the elements – a pulsing headwind, to be exact. It kept things tough; as did the mercury, which began to rise progressively. Those who’d burnt a few too many matches down the pass would come to regret it a little later.

Again, De Groot and I stayed together, and rotated to save energy. We worked well and found a good rhythm, knowing that riding together would keep up our efficiency. This strategy paid off, and we managed to ride within ourselves (and the support en route was superb, especially at the water points, where the spectators made us feel like rock stars. Thanks for that, guys – much appreciated!). With 28km to go it started to get pretty hot, or at least it felt that way – my Garmin claims the temperature peaked at 20 degrees. Lies, I tell you! It felt more like 30! After the third water point – at roughly 67km – we upped the ante a little, as the unmistakable form of Iniel Hattingh, who’d been part of the initial break, came into view. He looked pretty poked, yet still had enough in the tank to tow us for 4km before the final climb of the day. 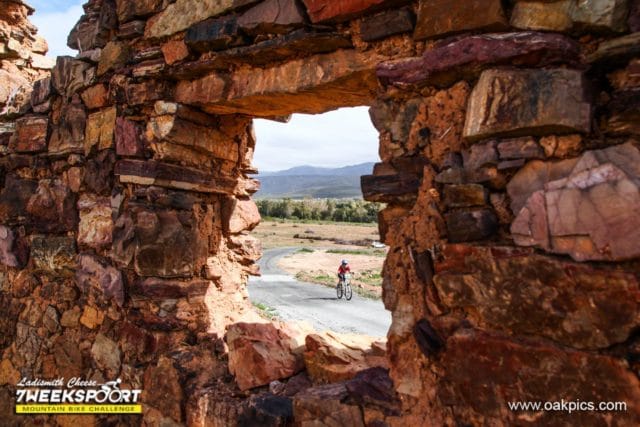 Going on the race organisers’ tweets from the day, with 10km to go Yolande de Villiers, David Garrett, Jan-Paul Gerber, and Jacobus Barnard were around three to five minutes ahead of us; which, according to my own calculations, meant Robyn and I had managed to claw back around 1.5 minutes in total. Unfortunately, it was too little too late. David Garrett managed to break away at the third water point (the exact spot Dylan Rebello attacked him last year), and held a 1min30sec gap to win the race. Yolande de Villiers came in with Jan-Paul Gerber to win them women’s race ahead of Robyn de Groot and Jenna Borrill, who secured second and third spot respectively. And I just missed out on a podium, finishing in fourth behind Kobus Barnard. 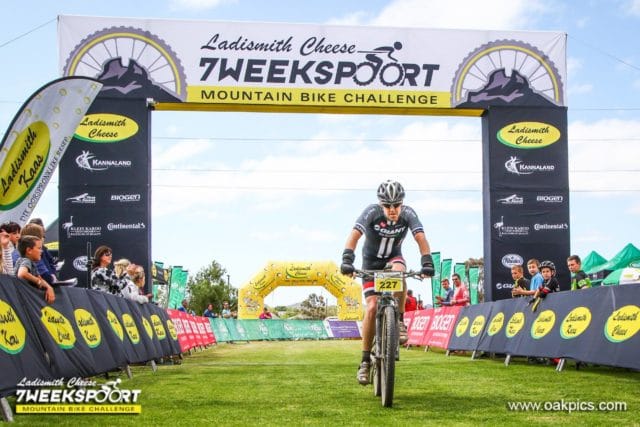 Catering for riders of all skill sets and fitness levels, the 7Weekspoort MTB Challenge is one awesome race. Sure, it’s 300km from Cape Town, but there’s plenty of accommodation in and around the Ladismith area to host you and your family for the weekend. For those looking for something a little different to the glut of races cluttering the local race calendar, 7Weekspoort is one race every mountain biker should ride at least once. Don’t miss out.