One of the most iconic landmarks in the world - Table Mountain - will once again play host to the prologue of the Absa Cape Epic. Here is all you need to know about the route...

Riders head along the route during the Prologue of the 2015 Absa Cape Epic Mountain Bike stage race held at the University of Cape Town in Cape Town, South Africa on the 15 March 2015 Photo by Sam Clark/Cape Epic/SPORTZPICS

One of the most iconic landmarks in the world – Table Mountain – will once again play host to the prologue of the Absa Cape Epic. Here is all you need to know about the route… 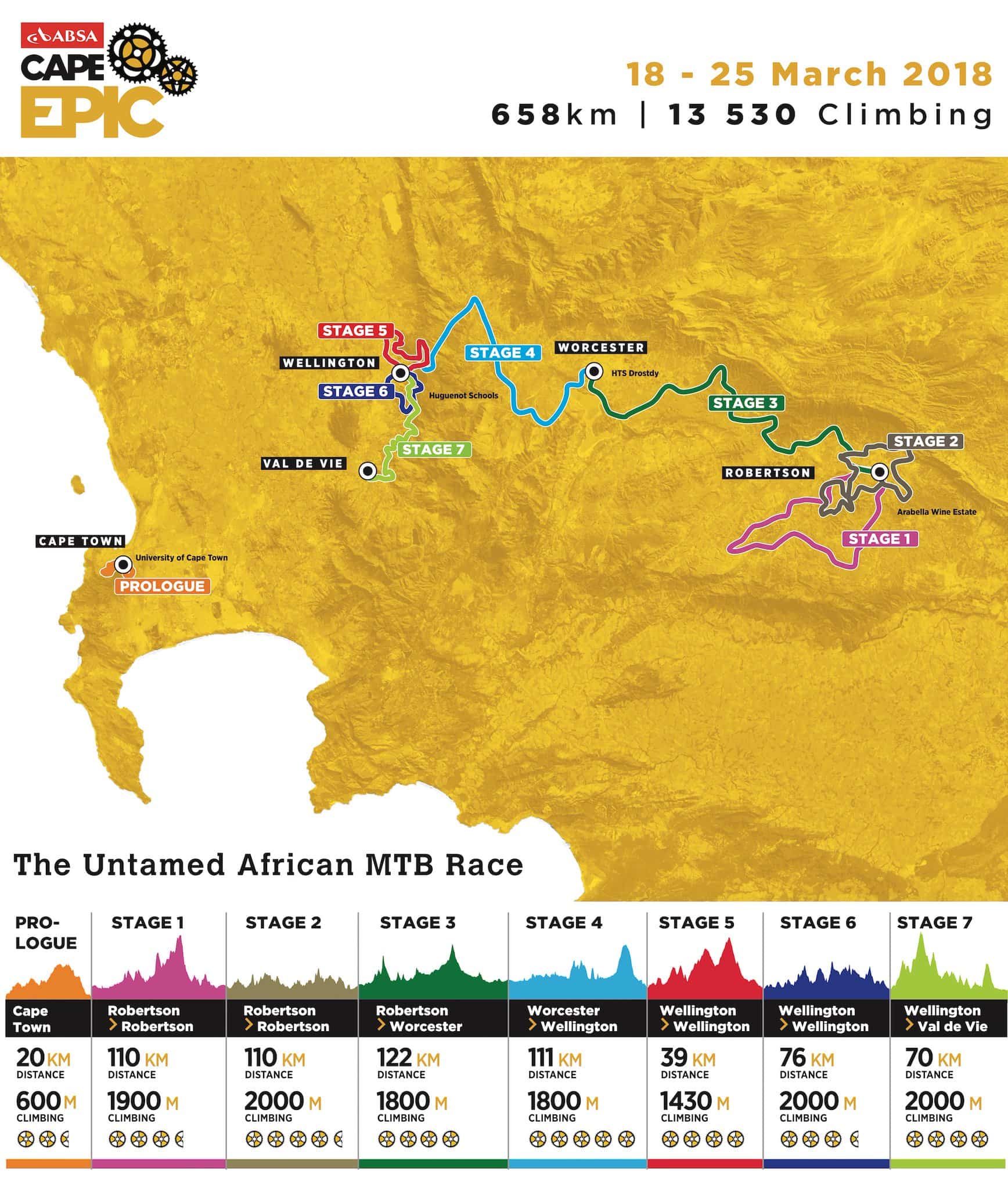 Its tough, washed out terrain and steep, energy-sapping climbs will be a thorough test for riders taking on this race for the first time. Those who participated in 2015’s edition will be well aware of the threat its tricky topography poses – the Plum Pudding descent in particular claimed a plethora of collar bones two years ago and with 20km and 600m to negotiate, riders should take heed as this is going to be harder on the legs than expected. 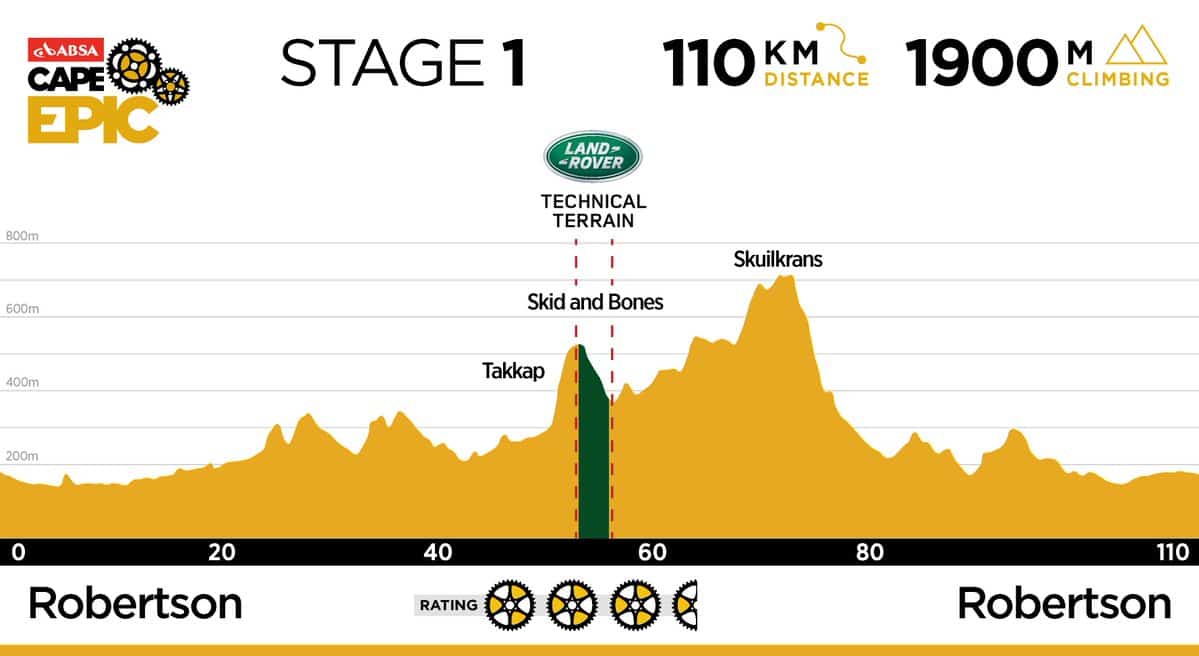 As per tradition the first stage of every Cape Epic is always going to be a challenge. This year isn’t any different… and this baptism of fire is sure to separate those who have trained from those who haven’t. The climbing starts almost immediately – the Takkap climb is a steep beast that will soon become the technical Skid and Bones descent, no respite here. Then there’s the gruelling 14km Skuilkrans climb which tops out at 722m… The final 30km to the finish line are anything but easy with undulating terrain dominating proceedings. 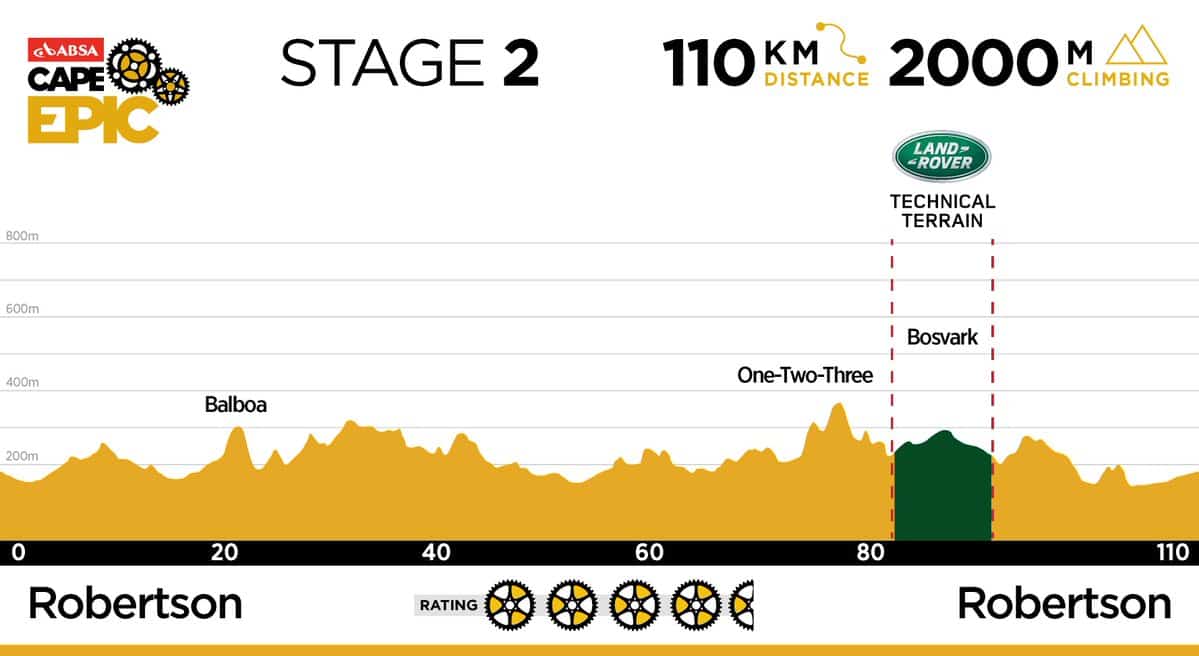 Rated by the organisers as 4.5/5 stars, this particular course is very much a pseudo Queen stage littered with ups and downs that force riders to earn every single kilometre. Rocks and sand will be the big challenges of the day. There are also two big bumps that await: the Balboa (rocky, narrow and steep) and One-Two-Three (loose and packed with devil thorns) climbs. The Bosvark single-track will provide no break for tired legs as riders struggle to find a rhythm. 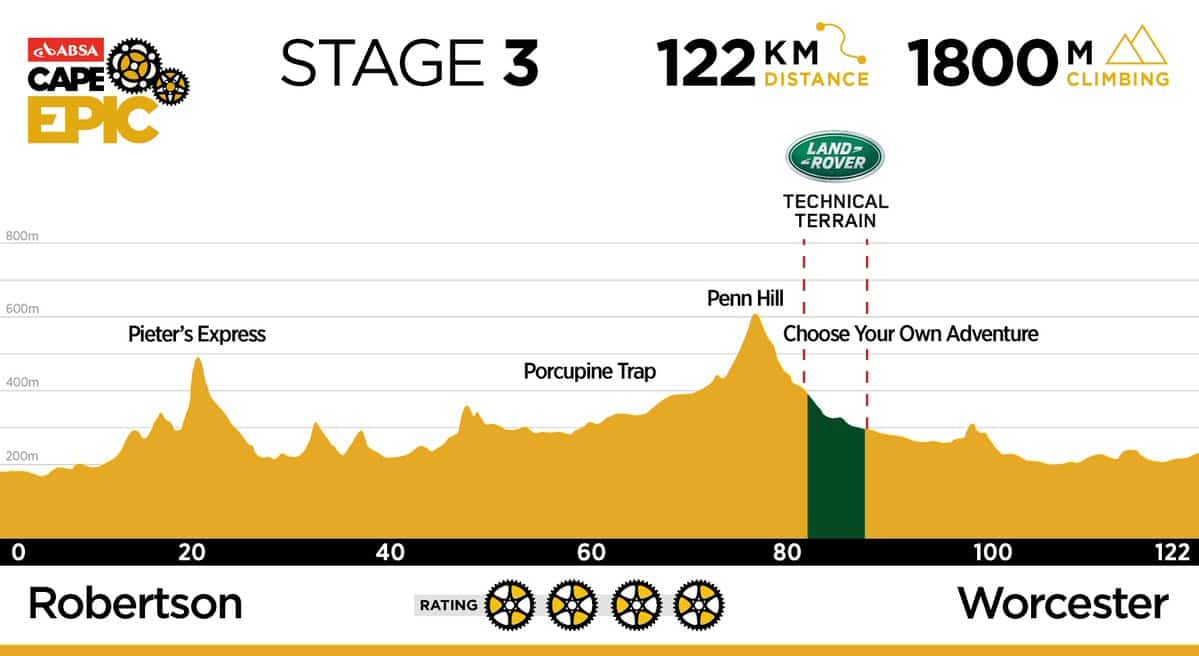 The first transition stage of this year’s race also happens to be the longest. Three notable segments comprise the 122km marathon: Pieter’s Express climb, Porcupine Trap and Penn Hill climb – each of which presents their own set of difficulties… This stage will be hard on both bike and body with lots of sand, thorns and choppy terrain categorising the route. 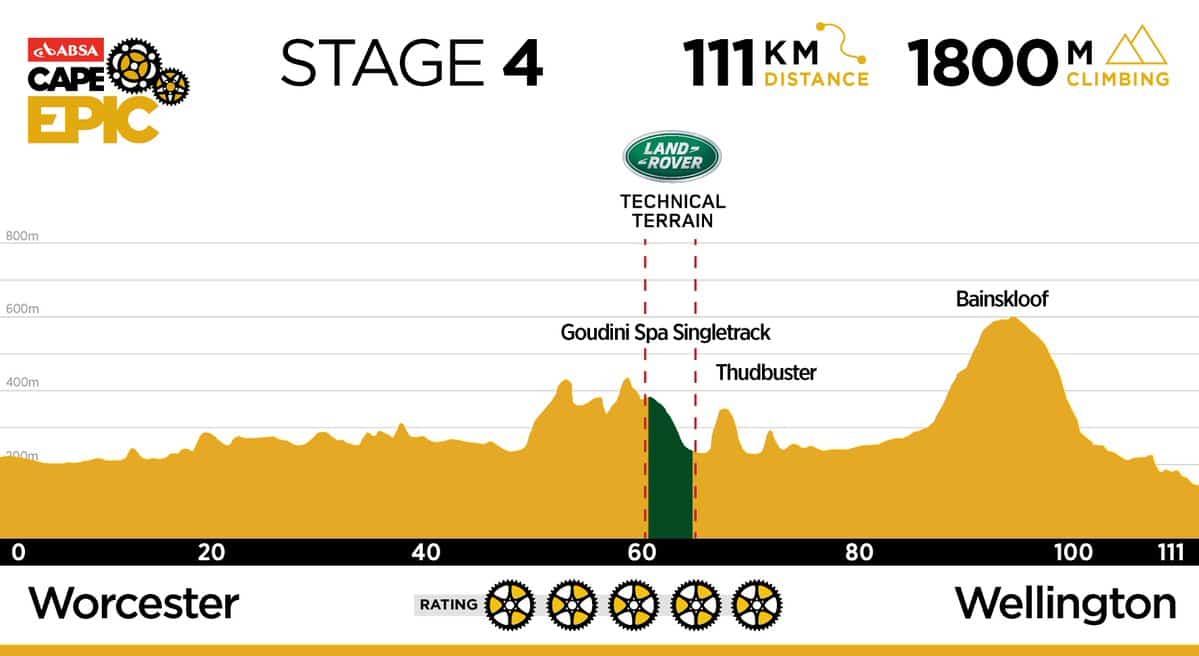 Ah yes, the Queen Stage. A name synonymous with striking fear into the legs of all participants. Last year was Groenlandberg, this year it’s Bainskloof Pass. This iconic climb and its many corners will offer little to no protection from the wind and searing heat. Before negotiating its hallowed tarmac however, riders will have to traverse the slopes of the purpose-built Goudini Spa single-track that links Goudini with the Slanghoek Valley. A tough day in the saddle awaits. 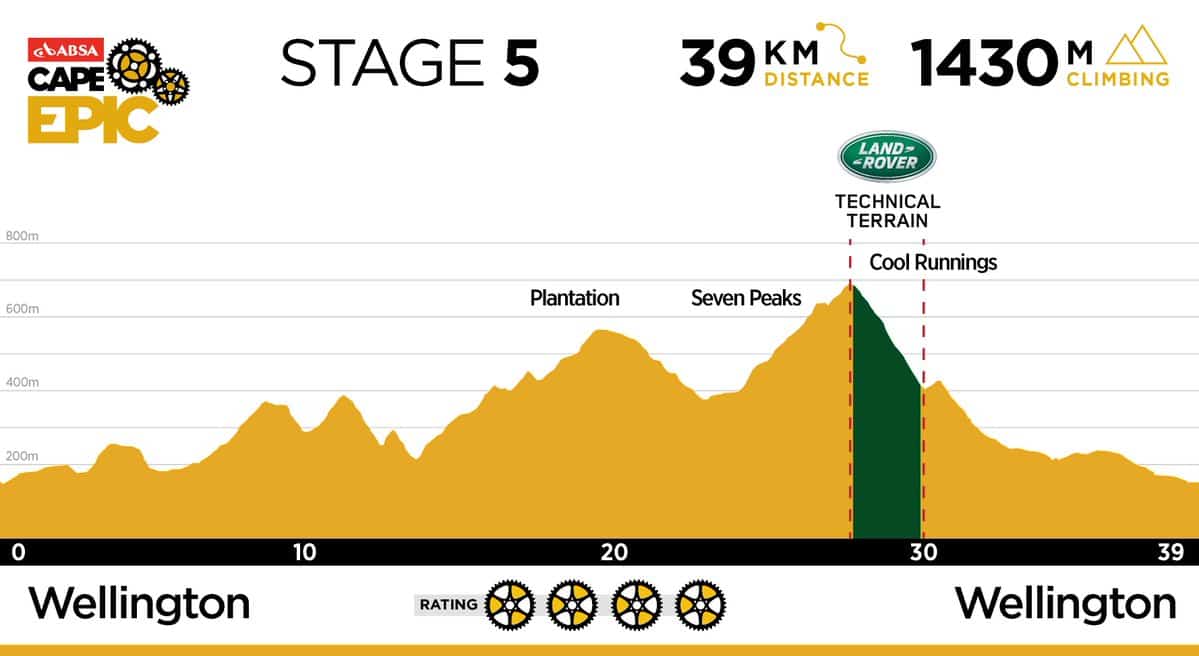 What!? 39km? Yes sir, but this time trial (the first one since 2011) is anything but a walk in the park, especially after four successive 100+km days in the legs. Whether you race it flat-out or use it as a ‘recovery’ day, one thing is for sure: those 1430m of vert are going hurt! The reward? The rollercoaster-like single-tracks of Cool Runnings before a fast and flat-out final 10km takes you back to Wellington. 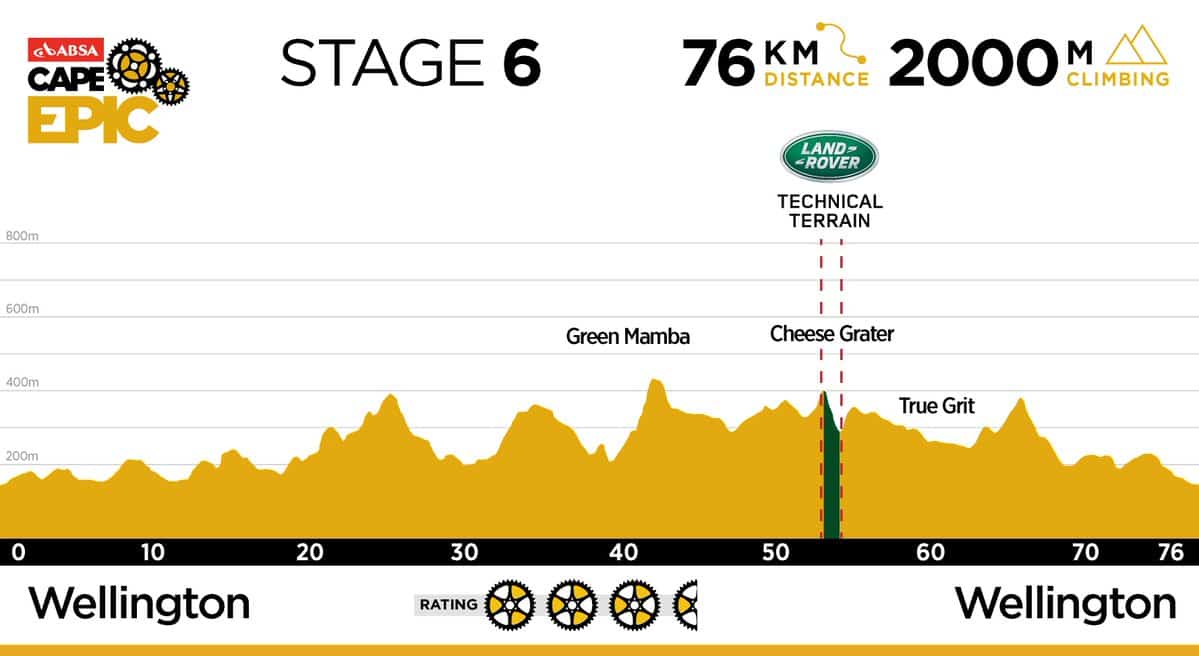 The penultimate stage of the 2018 Cape Epic might be shorter than the first few days but the climbing is right up there, as expected. Before heading into the Bains MTB Trails in Welvanpas, the Steep Green Mamba climb will need to be conquered. The trails here are tough, tricky and washed out, particularly in the summer months – one mistake could end in tears. 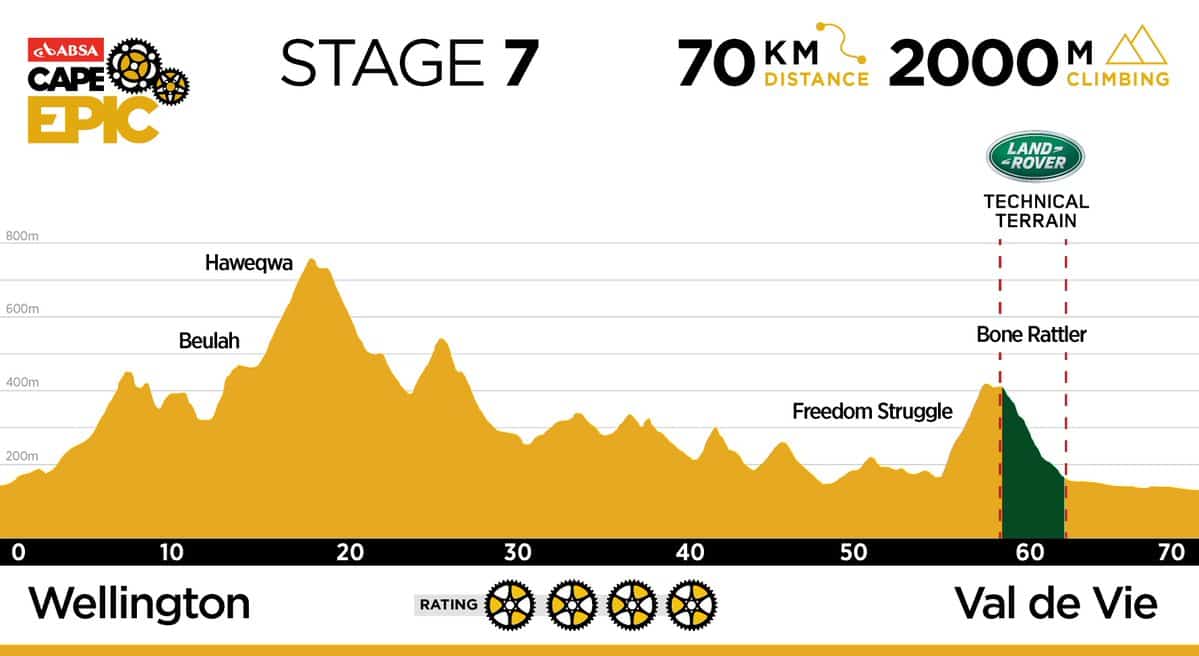 The final push to Val de Vie and a finisher’s medal is a challenging one with appreciably steep climbs making up the first 20km: Beulah and Haweqwa. From here it’s a 35km lactic acid-inducing slog to the final hurdle of the race, the 3km Freedom Struggle climb before one of the most treacherous descents of the last 8 days takes riders to the finish line at Val de Vie. 658km and 13530m conquered.

For a detailed look at this year’s route, check out the video.