Green jersey changes hands after a stunning turn of events.

Green jersey changes hands after a stunning turn of events. – By Joe Lindsey 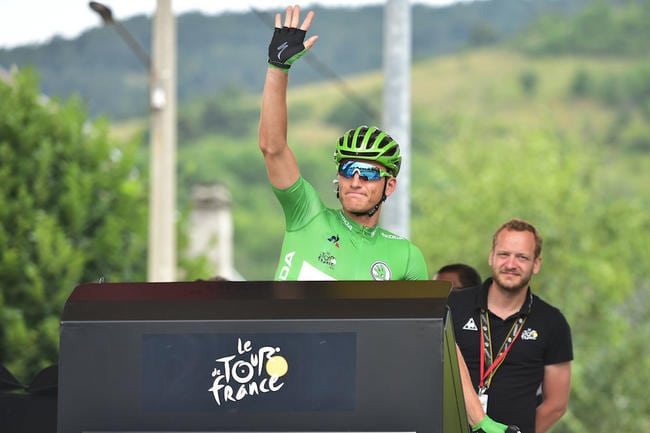 By the time the Tour de France got to Pau one week ago, all Marcel Kittel had to do to win the green jersey, seemingly, was survive to Paris. The German sprinter from Quick-Step had a 133-point lead in the competition, had been utterly dominant in sprints to that point, and was looking at two or more ideal drag-race style finishes in the final stages of the race.But deep into the second week, Kittel’s hold on the green jersey began to fall faster than his luxurious floof of hair on a humid day. That came courtesy of a bold and sustained assault by Sunweb’s Michael Matthews, who won Stages 14 and 16 and jumped into early breakaways in search of the points from intermediate sprints as well.
By the start of Stage 17, the first of two days in the Alps, Matthews had cut the advantage to just 29 points. And when he joined the early breakaway again, Kittel knew he was in for a long day. The intermediate sprint on Stage 17 came after a Category Two climb, and if he won, Matthews would pick up 20 points, bringing him within nine points of the lead. With similar conditions ahead in Stage 18, Kittel was suddenly looking vulnerable, and would have to rely on everything going exactly right on Stages 19 and 21 to win Green in Paris.Ultimately, those days won’t matter. Kittel went down in an early crash and had to switch bikes, then tried to sort out a pedal or cleat problem. He didn’t look seriously injured, but his demeanor on the bike signaled that all the fight was gone. With a stomach bug decimating his team, the race disappearing up the road and two long, mountainous days just trying to make the time cut looming ahead, Kittel simply climbed off the bike.It was a stunning turn of events for a rider who won five stages already this Tour. At one point, pundits were talking about Kittel matching the record of eight stage wins in a single Tour. Instead, he’ll be on a train or plane home tonight. And Matthews is wearing green.

It’s worth noting, without detracting from Matthews’s sterling second week of racing, that the DQ of Peter Sagan on Stage 4 dramatically shaped this race. Matthews and Sagan are similar riders: strong but not dominant sprinters, who climb well and are good in tricky finishes. Had Sagan still been in the race, he and Matthews would likely have split many of those points in the second week, and either Sagan would be in green or Kittel would be so far out front that he wouldn’t have cared who went on the attack.

Now, stages 19 and 21 look to be an open shot for the sprinters left in the race. With Sagan, Kittel, Arnaud Demare, Mark Cavendish and Dan McLay gone, Lotto-Soudal’s Andre Greipel might be the biggest beneficiary, joined by Katusha’s Alexander Kristoff. Matthews would love to add a bona fide sprint win to his haul, Dimension Data’s Edvald Boassen Hagen has finished top three four times and would certainly like to end the run of almosts, and Cofidis’s Nacer Bouhanni will see a clearer line to the front as well. Without Quick-Step to control, those sprints will be anyone’s game.

RELATED: How Does a Tour de France Sprint Work?

Kittel wasn’t the only high-profile abandon on the day. FDJ’s Thibaut Pinot also climbed off early. Pinot never got going in the Tour after racing to fourth in May’s Giro d’Italia. Like Movistar’s Nairo Quintana, he simply hasn’t seemed to be able to recover in time to regain his form. That leaves FDJ with just three of their original nine starters. Guess nobody has to fight over seats on the team bus or share hotel rooms anymore. If FDJ loses one more rider, they will be declassified from the teams standings, because that competition is based on the times of each team’s top three riders. Not that it’ll matter that much at this point; they’re already dead last. 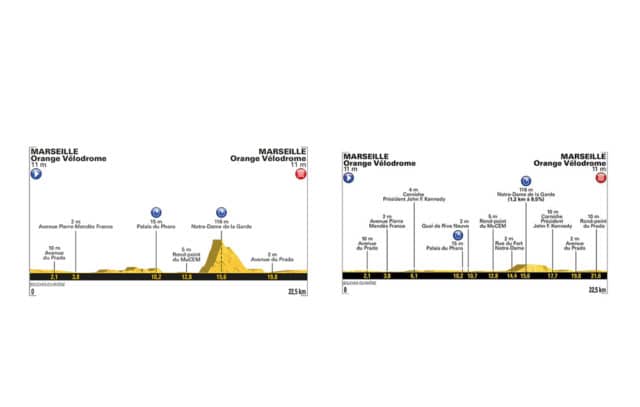 The men’s field won’t be the only ones climbing the Col d’Izoard tomorrow. Thursday sees the climbing stage of the women’s La Course event. Previously a one-day race on the final day of the Tour on the Champs-Elysees, la Course is now a somewhat strange hybrid, consisting of a 67.5km climbing stage on Thursday, which is both its own competition and a kind of qualifier, since the top finishers will go to Marseille for a pursuit-style time trial event on Saturday, to be held on the same 22.5km course as the men will race.

We’re glad that there’s a women’s event associated with the Tour. We’re glad it’s expanded to two days from one. The format, however, is a little puzzling with its non-traditional time trial, and day off between races. We also noted that the profile cards for the men’s and women’s time-trial routes look different, with the scale on the women’s version (right) compressed to make the short climb to the Notre-Dame de la Garde look about half as steep as the men’s profile card (left).

Pro cycling’s free agent season doesn’t officially get going until August 1, but the Tour de France is always an active time with agents and managers talking deals. This year, there are lots of rumors but almost no confirmation (deals can’t be signed until August 1 but are often agreed to in principle well before).

Among the biggest? Nairo Quintana getting out of his Movistar contract to ride for Sky, super-domestique Mikel Landa going the opposite way, and Fabio Aru deciding on Astana or UAE Abu Dhabi. One big holdup seems to be what happens to Quick-Step. The team is searching for a new title sponsor, and general manager Patrick Lefevere told CyclingNews that the lack of news is holding up the transfer market because everyone is waiting to see if Quick-Step continues, and if so, which riders stay and which leave (Kittel is rumoured to be looking at a switch). Once some of the team sponsorships fall into place, expect a rapid game of musical chairs.

Cycling’s tradition of hostesses, or podium girls, presenting jerseys, awards and kisses during post-stage ceremonies has been the topic of debate for years now, with criticism that it’s degrading to women. This year, the WorldTour-rated Tour Down Under did away with podium hostesses altogether. Now, the Tour of Spain is tweaking its own approach. They’re not doing away with the hostesses, but they will add “elegantly” dressed male counterparts, and the congratulatory kiss will be retired.