Is the Race for Yellow Over? And More Rest Day Takeaways From the Tour

AS THE RIDERS, AND THE FANS, ENJOY THE FIRST REST DAY, POGACAR’S DOMINANCE, CAVENDISH’S RESURGENCE, AND OTHER NEWS YOU MIGHT HAVE MISSED.

After the first nine stages of the 2021 Tour de France, with Sunday’s stage ending atop a Category 1 climb to the ski resort in Tignes, the first rest day is here. Let’s discuss what we’ve learned in the last nine days, and hand out some early grades.

On the first rest day, is the race for the yellow jersey over?

Entering the first rest day, defending Tour champion Tadej Pogačar (UAE-Emirates) has a lead of two minutes over his nearest challenger, Ben O’Connor of Ag2r-Citroën; O’Connor isn’t considered a likely threat for the overall, but he may land on the podium.

Among Pogačar’s better-known rivals, things … aren’t great. Rigoberto Uran of EF Education-Nippo is closest, 5:18 down. For perspective, that’s more than the final winning margin of any Tour since 2014, when Vincenzo Nibali beat Jean-Christophe Peraud by 7:37.

On every day that mattered in the race so far, Pogačar has put time into his rivals. He won the time trial, and has crushed in the mountains. With Pogačar’s most threatening challenger, Primož Roglič, out of the race after crash injuries torpedoed his Tour, it’s worth asking the question: is the 2021 Tour already over?

This is where we remind you that there are almost two weeks of racing yet to come, and anything can happen, yada yada yada. Pogačar’s clearest weakness is his team, which has struggled to control the race the last three stages. But that hasn’t seemed to bother him much; he’s been comfortable even when isolated, and is living by the adage “the best defence is a good offence.”

Beyond mishaps like crashes or crosswinds, where Pogačar has proved a bit vulnerable in the past, there’s one other possibility to consider: he’s peaking too soon. Pogačar has been head-and-shoulders the best rider in the race so far, but it’s hard to sustain top form like this for long. (Last year, Pogačar’s coach, Iñigo san Millàn, said he actually had to back Pogačar off at one point because he was too strong too soon.)

So there’s a chance that Pogačar will fade in the third week, but keep in mind that Pogačar is grabbing fistfuls of time whenever he can. That advantage will be tough for his rivals to erode. Pogačar is also a heady racer; if he starts to lose form, he won’t panic, but right now, it’s what his rivals have to work with. It’ll take aggressive, creative racing to crack him—but it’s not impossible. 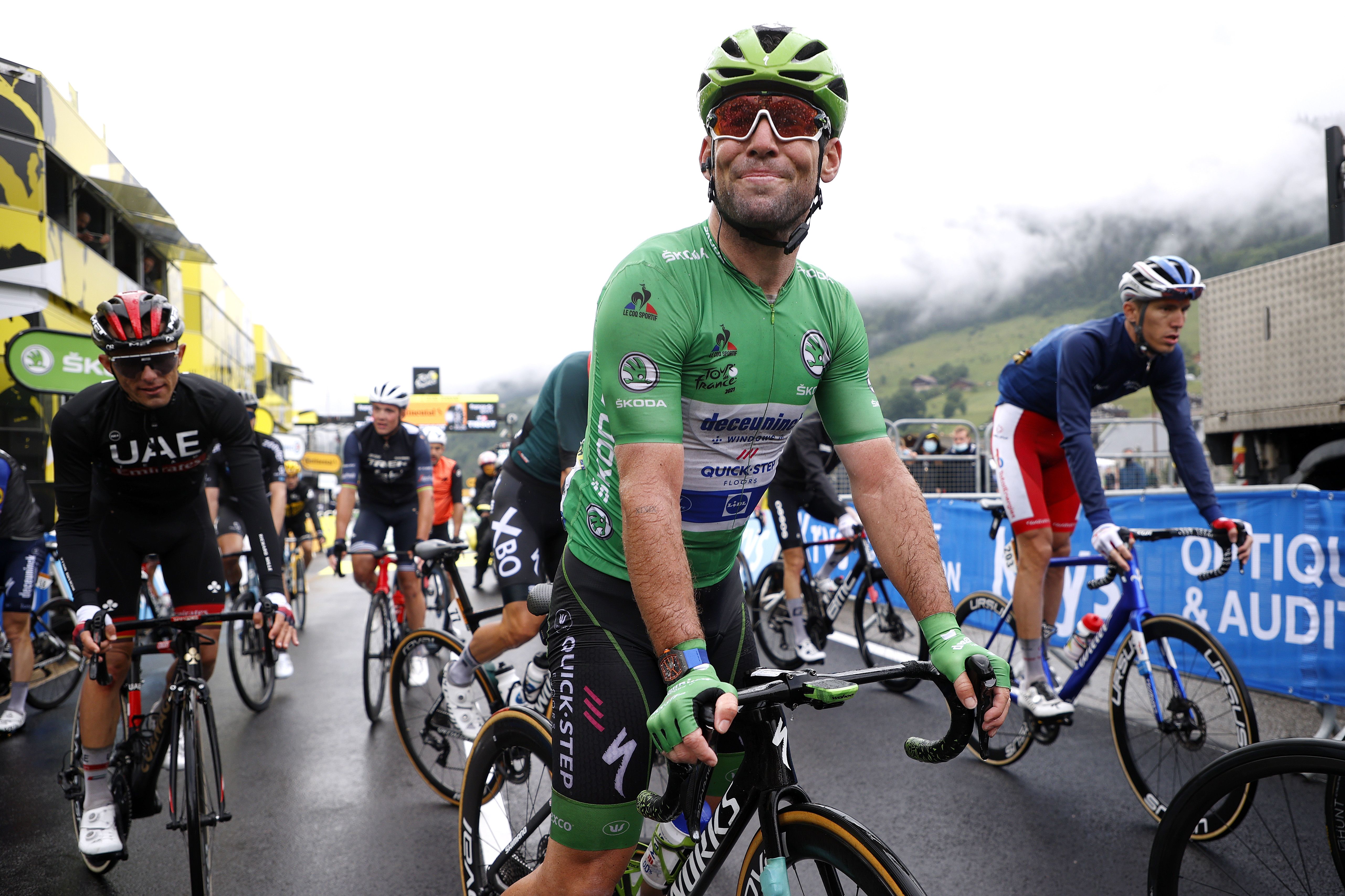 Other jersey competitions in flux

Pogačar also leads the Young Rider standings comfortably, over Jumbo-Visma’s Jonas Vingegaard. The KOM jersey competition is just heating up, and Nairo Quintana (Arkea-Samsic) may be eyeing another win in that competition to add to his 2013 title. There’s a lot of climbing left, and riders like Michael Woods of Israel Start-Up Nation and Wout Poels (Bahrain-Victorious) could be challengers.

The most interesting secondary competition, however, is for points. Deceuninck-Quick Step’s Mark Cavendish leads those standings comfortably, with 168 points to BikeExchange’s Michael Matthews, at 130. For all of Cav’s 32 Tour stage wins (two in this Tour), he’s only won green in Paris once, in 2011. A second jersey would be the capper to a remarkable comeback season, given that he was almost out of the sport last year.

But it will be a tough road. Matthews and Bahrain-Victorious’s Sonny Colbrelli, in third with 120 points, are cagey veterans who climb better than Cavendish. (Cav was just ahead of the time cut on Stage 9, while Colbrelli was in the break and third on the stage and Matthews finished comfortably in the gruppetto.)

Cavendish, by contrast, wasn’t even supposed to be at the Tour; he was a final-week replacement in DQS’s roster for Sam Bennett. And he has a spotty history of making it to Paris, with DNFs in five of his 13 Tour starts. The race’s second week features few true sprint finishes, and Cav may have to join the breakaways to fight for valuable intermediate sprint points, which will cost him energy he’ll need to survive the time cut in the Pyrenees.

On his side: extreme confidence, for one. Cavendish’s Stage 4 victory was a breakthrough, quickly followed by another win two days later. Confidence is its own kind of leadout, and no one’s is higher than Cav’s. The sprinters’ field is also rapidly dwindling. Alpecin-Fenix, the best sprint team in the race, lost two sprinters today when Stage 2 winner and leadout man extraordinaire Mathieu van der Poel didn’t start and Stage 3 winner Tim Merlier dropped out mid-stage. FDJ’s Arnaud Démare missed the time cut. So there are only a few rivals left to watch.

Finally, Cavendish doesn’t have big objectives left this season: the Olympic course is too hilly for pure sprinters, and he’ll need rest after the Tour. So there’s zero reason to hold back. This is Cav’s YOLO Tour, and we’re all enjoying the ride.

Simply put, he’s done everything right, got lucky with the first-week crashes, and is flying. He’s the best TT rider in the race and its best climber. Shaky team aside, he seems personally invincible. It’s his race to lose.

All three teams have at least two stage wins, and DQS and Alpecin both held the yellow jersey. None of them came to the Tour hoping for an overall victory. Stages were their big focus, and they’ve already delivered. Alpecin’s Mathieu van der Poel in particular came out fantastic: winning a stage and taking the yellow jersey to honor his grandfather, Raymond Poulidor, who never wore yellow in his otherwise-standout career. Van der Poel held the lead six days, longer than most expected, and departed the race Sunday to focus on the Olympic mountain bike race.

Cycling’s superteam entered the 2021 Tour with three former Grand Tour winners on its roster, and at least two hopefuls for the overall (2018 Tour winner Geraint Thomas and 2019 Giro d’Italia winner Richard Carapaz). Nine stages in, those goals are shredded. Thomas crashed on at least two early stages, separating his shoulder. He’s almost 40 minutes behind. Carapaz limited his damage in the frenetic early stages, but has steadily bled time since. Twice, he’s made aggressive moves that were brought back by Pogačar or others, spending lots of energy for no gain. For a team with a $70 million budget—four times the WorldTour average—it’s inexcusable to be almost halfway through the Tour with zero stage wins and their best rider in fifth overall. 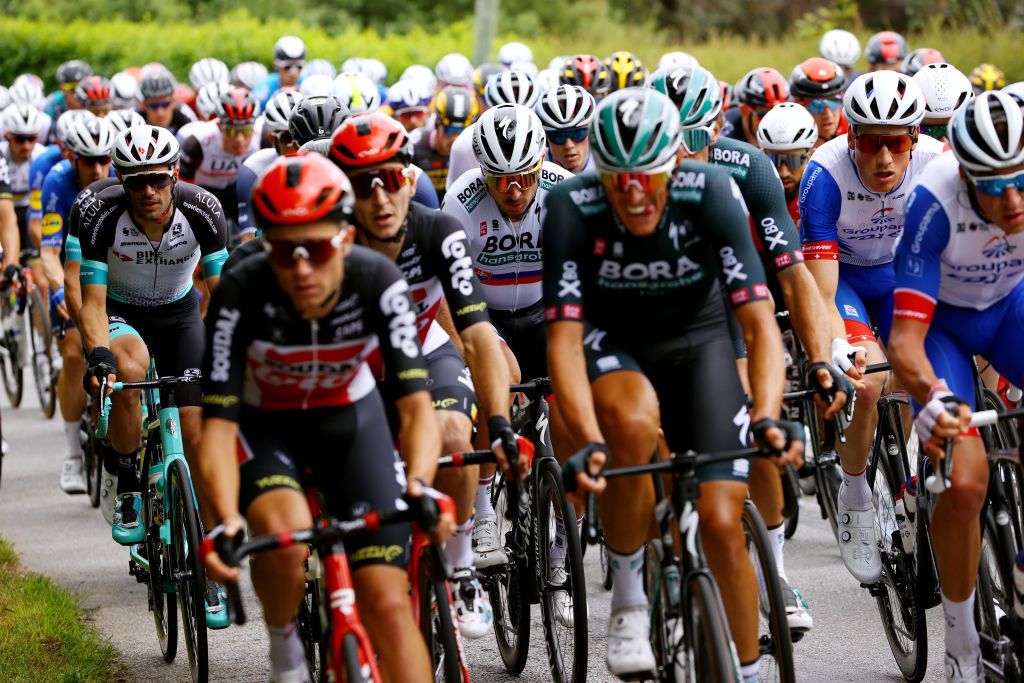 184 – Number of riders who started the Tour in Brest

165 – Riders left in the race on the first rest day, after nine stages

11.3km – Distance at the finish between Stage 9’s winner (Ben O’Connor) and the last group on the road.

93.7kph (58mph) – Speed O’Connor hit on the descent off the Cormet de Roselend, in the rain

2:16 – Time, in minutes, separating Arkea-Samsic’s Daniel McLay and Roger Kluge of Lotto-Soudal in the “race” for the Lanterne Rouge, the Tour’s last-placed rider

18 – Climbs ranked Category 2 or higher remaining in the race

4 – Mountain stages with downhill finishes yet to come

12 – Years (and counting) since Cofidis won a stage, the longest dry spell of any active team

2 – Finish towns left this year with likely field sprints that Cavendish has won in past years (Nimes, Paris)