It Was The Best Of Years. Or Was It? Here Are Our Tour de France Takeaways

HOW TADEJ POGACAR AND WOUT VAN AERT CEMENTED THEIR STATUS AS GENERATIONAL RIDERS—AND HOW THE THIRD WEEK GOT WEIRD.

The 2021 Tour de France was binary: either fans thought it was a suspense-less slog to a foregone conclusion, or one of the most memorable of recent editions. In truth, it was a bit of both, with takeaways for both camps. On the one hand, you had Tadej Pogačar’s inexorable march to victory. On the other: crashes and unpredictable racing, Mark Cavendish’s resurgent glory and chase for Eddy Merckx’s record for all-time stage wins, and scads of late-race breakaways (including Sepp Kuss!). Was it a classic Tour for the ages? Nope. But neither was it boring. Here’s some of what we noted.

A Tour of Revelations

The 2021 Tour saw two riders cement their reputations as among the best riders of their generation, and two more with spectacular debuts at the race.

It’s hard to call the defending Tour champion a revelation, but Pogačar (UAE-Emirates) confirmed that his come-from-behind win on the penultimate stage in 2020 was no pandemic fluke. This year, he dominated.

Pogacar, who was never lower than sixth overall, won both time trial and mountain stages, including back-to-back stages in the Pyrenees; showed roughly a minute’s worth of weakness over more than 82 hours of racing; and never looked to be seriously under threat even when isolated. Next, he heads to Tokyo for the Olympic road race on July 24—and we’ll have more to come on Pogačar’s dominance.

Feel the Need For Speed? Bicycling can help you get faster and fitter!

Similarly, Wout van Aert (Jumbo-Visma) took exactly no one by surprise this Tour. But it’s worth noting that the Belgian phenom won a mountain stage, a time trial stage, and a sprint finish: the first time any rider has accomplished that since Bernard Hinault in 1979. Hinault raced at a different time: an era when Grand Tour winners like him weren’t specialists, but contended in all kinds of stages. Today, a feat like van Aert’s shows instead that he is the most versatile road racer in the sport.

He may not be the only one: Mathieu van der Poel and Tom Pidcock are also supremely talented, multi-dimensional riders. But at the Tour, it was van Aert’s show all the way. He’s also headed to Tokyo. 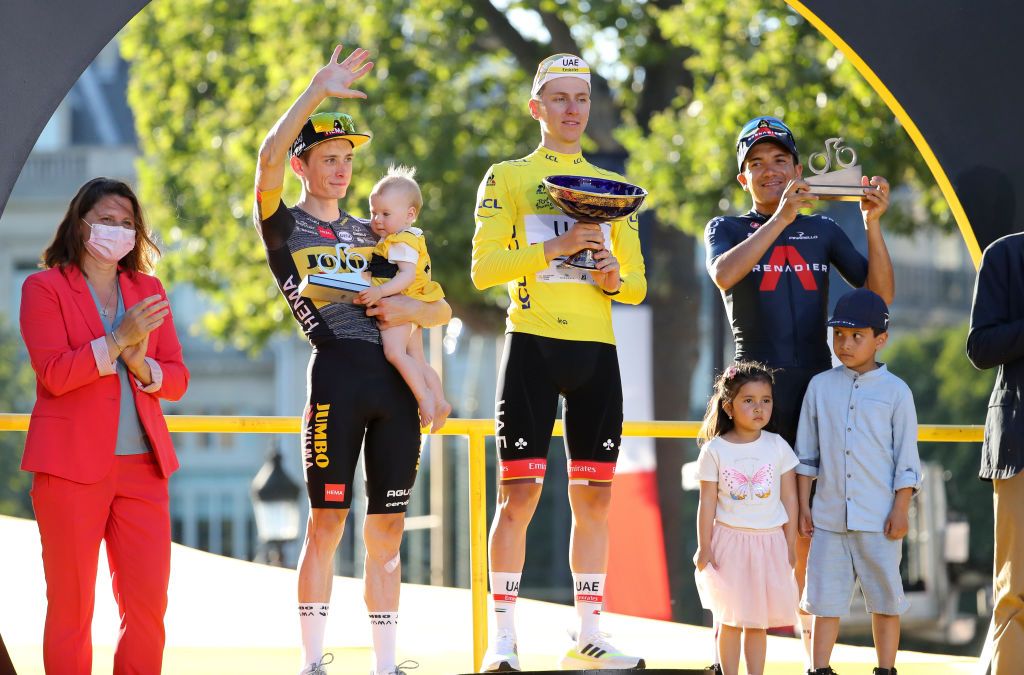 Among true revelations, van Aert’s teammate, Jonas Vingegaard, was the fashionable pick for a high finish in his first Tour. He rode extremely strong in the spring, but nothing in the third-year WorldTour pro’s resume suggested he’d go quite this well and no one picked him for a podium. Chalk it up to being in the right place at the wrong time. Vingegaard was supposed to support Primož Roglič, but when Roglič’s crash injuries proved too much, Vingegaard was perfectly poised to take his place. He rode smartly (and luckily) in the first week to avoid most of the crashes, there was no pressure on him, and his time trial skills were ideal for this year’s course. He was also the only rider to (briefly) put Pogačar in difficulty. Not bad for a guy who was working in a fish factory in Denmark a few years ago.

The hard truth of pro road racing is that big-budget teams have a clear advantage over their more modestly funded competition. But you can still find great riders capable of fantastic rides on smaller teams—and Ben O’Connor of Ag2r-Citroen fits that definition perfectly. A low-priced pickup for 2021 from the Qhubeka team, where he rode for four years, O’Connor flashed signs of his abilities last year at the Giro d’Italia, where he won a stage.

This year, he’s started to mature into a talented stage racer, with top 10s at several prestigious races. His Stage 9 raid to Tignes at the Tour not only netted him a stage but shot him to second overall. And instead of fading after losing time on the Ventoux stage, he instead rebounded with solid rides in the Pyrenees to finish fourth overall. He’s not a great time-triallist, but neither is he terrible; with some work, he could close the gap some to his competitors, and when his climbing form is on, he’s hard to beat.

The Tour always goes a little batty in the third week, as riders’ aspirations fall apart and the pressure ratchets up. This year was no different; the two strangest stories were both about cheating.

After a report in le Parisien that quoted anonymous members of other teams questioning the performances of some Bahrain-Victorious riders, the team got a visit from a French police unit that investigates public health. The raid unsettled the race, and while team officials claimed they had cooperated and had nothing to hide, Matej Mohorič created a PR mess with his zip-the-lips victory salute on Stage 19.

To many, the gesture recalled an ugly moment from the 2004 Tour when Lance Armstrong chased down and bullied Filippo Simeoni, a rider who’d testified against Armstrong’s coach, Michele Ferrari. Mohorič was nine years old at the time of Armstrong’s ride and claimed his own gesture was just a message to the critics—not to doubt the team. But it left a bad taste for observers who recall not only the Armstrong years, but links between the Bahrain team and the 2019 Aderlass doping scandal, which saw one Bahrain rider and one director suspended for two years.

And the weirdness wasn’t only about chemical doping. The Swiss daily le Temps raised suspicions about mechanical cheating with a story quoting anonymous racers in the Tour peloton saying they’d heard strange sounds coming from bicycles.

So-called motor doping is not a new suspicion in pro racing, but the le Temps story suggested that cheaters had moved past conventional hidden e-bike motors in favour of sophisticated Formula 1-style energy recovery systems or even electromagnetic motors hidden in rear wheels. Never mind that neither of those technologies has been adapted to bicycles in a way that can be concealed in a hub or rim.

Most of those questions focused on Pogačar’s team, and the yellow jersey sounded by turns exasperated and confused by the allegations. It’s normal for the race leader to be the subject of skepticism and scrutiny, but this was baroque even by Tour standards.

Pogačar is the 13th rider to win back-to-back Tours (15 if you count Alberto Contador and Lance Armstrong, who had victories stripped for doping). Those riders accounted for 42 or 52 wins, depending on how you count.

Want proof that pro road racing is increasingly an international sport? The top 10 overall featured riders from nine different countries. That’s an all-time high for the Tour. Only Spain was represented twice (Enric Mas in sixth and Pello Bilbao in ninth).

Speaking of Bilbao, the Spanish stage racer and Irish rider Dan Martin share a new record that is unlikely to be repeated anytime soon. Both have ridden four Grand Tours in the past 10 months. Both rode last year’s pandemic-delayed Tour de France, which started in late August, and then another GT (the Giro d’Italia for Bilbao and the Vuelta España for Martin) and then this year’s Giro and Tour. Bilbao has the slight edge both in overall result (his worst finish in those four races was 16th overall in last year’s Tour), and race days. Because the Vuelta was unable to start abroad as intended, it was only 18 stages long.

This year’s race featured a breakaway-heavy second half. From Stage 11 through 16, five stages were won by riders from the early move. That’s in line with recent historical norms. If you break the Tour up by weeks, over the last 20 years, just 22 stages have seen successful early breakaways—just more than one per seven stages of racing. In week two that jumps to 30, and in week three a total of 50 stages the past 20 years have seen the early break get to the line first. 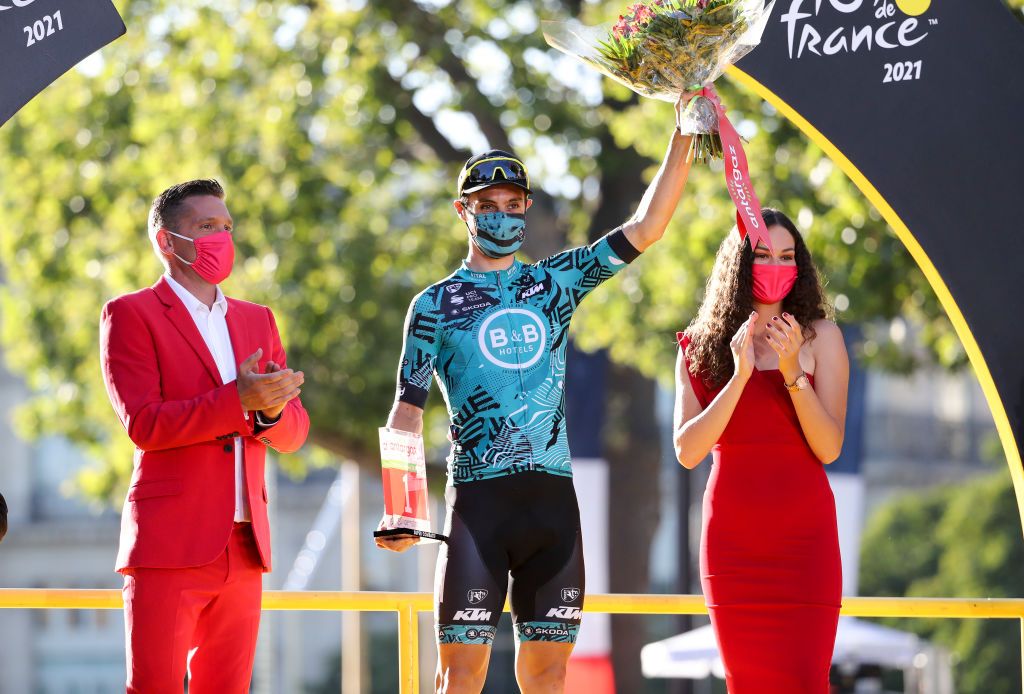 Tour de France by the Numbers

624: Kilometres in the break for Franck Bonnamour, Prix Combative winner

141: Finishers (Jakob Fuglsang did not start the final stage due to fever)

9: Stage wins for Slovenian riders the past two Tours (6 for Pogačar, 2 for Mohorič, 1 for Roglič)

2: Previous stage wins all time by Slovenian riders (both by Roglič)

6: Stages Mohorič spent in the early break, the most by any rider

24.32 kph: Average speed for Lachlan Morton in his Alt Tour, which was 2,070km longer than the official Tour route