Stage 19 – The Big Break, Or The Thundering Peloton?

After many mountains climbed, the peleton begins the final transfer to Paris with a lumpy, bumpy sprinter stage.

After three heavy days in the Alps, the Tour de France peloton breathes a sigh of relief to face this relatively short and easy stage before the penultimate day’s time trial. The profile looks lumpy, but with 2 000 meters of climbing it’s got less vertical gain than all but five other road stages at this year’s race. But it’s not straightforward at all. 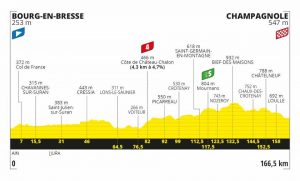 Deceuninck-Quick Step’s Sam Bennett won the Stage 18 intermediate sprint to further pad his green jersey lead over Bora-Hansgrohe’s Peter Sagan to 52 points. With a maximum of just 140 points on offer for the last three stages, it’s virtually impossible to imagine Bennett losing his grip on the competition now.

That should mean another breakaway rolls clear of the peloton in the early going of the stage. More than half the teams in the race have yet to win a stage, and this is essentially the last breakaway opportunity, as it’s extremely rare for a break to win on the Champs-Elysées. So expect some motivated attackers.

But the sprinters teams will likely control the peloton to keep the gap to a manageable level—not more than five minutes—because if they can make the catch, they can set up a sprint finish for the fast men.

Even that isn’t a slam-dunk, however. There is a right-hand bend that’s more than 90 degrees; it would be unremarkable except that it comes just over 1km from the finish. That means the fight for positioning could be even fiercer than normal as all the sprinters’ teams try to make sure their speedsters and leadout men are right up front in the peloton for the crucial corner. The bend is wide enough that it’s not a squeeze, and is immediately preceded by a gentle rise after the pack crosses a bridge over the Ain river.

But speeds will be high, and anyone who misjudges the exit could cause a crash that splits the pack (this will not be a factor for finish times). There’s also a very gentle left around 500 meters to go where the course will narrow slightly—another potential pinch point where positioning will be crucial.

The upshot? A nervous, high-speed finish, especially if the peloton mis-times the catch on the breakaway.

The puncheurs or the peloton?

Any and all could be active in the break, but we’d expect CCC, Israel Start-Up, and NTT to be most motivated. Chances are the sprinters’ teams will make the catch, and aside from the usual suspects like Bennett, Sagan, Lotto-Soudal’s Caleb Ewan and Stage 1 winner Alexander Kristoff (UAE-Emirates), expect Cofidis’s Elia Viviani to try to break his team’s 12-year dry streak of Tour stage victories.