Finally, the Tour de France hits some proper mountains to help us work out who the winner in Paris might eventually be, from a tightly-packed Yellow Jersey field.

The Tour returns to the Massif Central region of France for this medium mountain stage with a brand-new (to the race) summit finish, where the winner in Paris will need to show himself. This is not a stage where the Tour can be won, don’t get too excited. But the grippy climb at the end will see a thinning out of the also-rans. The Pas de Peyrol has been featured 10 previous times in the Tour, as recently as 2011, but never finished atop the climb. 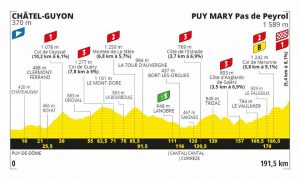 The Category 1 ascent comes at the end of a heavy day of climbing, with seven total ascents and 4 400 meters of climbing—more than any stage in this year’s race except Stage 18.

These climbs aren’t the long monsters we’ll see in the race’s third week in the Alps. They’re shorter and generally less steep. But the sheer number of them, sprinkled more or less from start to finish, suggests we’re likely to see a bigger breakaway that’s a mix of riders hunting a stage win and racers with designs on the polka-dot jersey of best climber.

That competition has been a little sleepy so far this Tour, with Ag2r la Mondiale’s Benoit Cosnefroy in the lead with 36 points, but unlikely to be the winner by the end of the Tour, five ahead of teammate Nans Peters and Stage 12 winner Marc Hirschi (Sunweb). To put those figures in context, there’s a maximum of 36 points available on Friday’s stage alone.

READ MORE All The Bikes Of The 2020 Tour de France

Besides the KoM competition, there’s the break itself to consider. How large it is, and who is in it, will decide how hard the pack chases. Barring any surprise attackers who are a threat on the overall, expect Jumbo-Visma to do most of the pacemaking to keep a reasonable handle on the gap to the escapees and allow the day’s winner to come from it.

The tricky part is the finish, which stacks two climbs back to back in the final 15km. First is the Category 2 Col de Neronne, which isn’t long (3.8km) but averages 9.1 percent. If the breakaway is still clear but their gap is coming down, this is an ideal launching pad for one or two riders to go for a stage win.

The Neronne is followed by 6km of flat and gently descending terrain to the start of the Pas de Peyrol. The first 3km of that climb are nothing special, but the last 2.5km shoot up steeply, averaging almost 12 percent, with one short section to 15 percent.

That’s where we’d expect to see attacks among the yellow jersey group, especially if there’s a shot at a stage win. After 12 stages, the standings are tight, with seven riders within 1:02 of Primoz Roglič’s lead.

And the winner is…

The profile strongly suggests an early breakaway and it could be sizable. There are three groups of likely protagonists: stage hunters, KoM aspirants, and Peter Sagan (BORA-Hansgrohe).

Sagan tried but failed today to get in the break, and his team’s plan to gain back points in the green jersey competition didn’t quite pan out. If Sagan wants a shot at green in Paris, Friday is pivotal; he needs to go on the attack to get the intermediate sprint points after the initial climbs, where rival Sam Bennett (Deceuninck-Quick Step) likely can’t follow. If so, he’ll find company in KoM contenders like Cosnefroy, B&B Hotels’s Quentin Pacher, and possibly Hirschi and Trek-Segafredo’s Toms Skujinš (hopefully recovered from a rough crash on Stage 10). Finally, stage hunters: there are many candidates, but Groupama-FDJ will likely be active, and also CCC with riders like Alessandro de Marchi. In the contenders group, watch for late moves on the Pas de Peyrol from UAE-Emirates’ Tadej Pogačar, the most aggressive so far of that group, and possibly Bahrain-McLaren’s Mikel Landa and Ag2r’s Romain Bardet. We are going for a slightly left-field winner, though – there are too many GC guys with teams ready to up the pace into the final climbs – with Arkea Samsic producing the winner on the day with Nairo Quintana. Already a stage winner under the oppressive Movistar blanket, the pint-sized Columbian has been refreshingly fun to watch since leaving the Spanish team. Winner, winner, Nairo dinner! 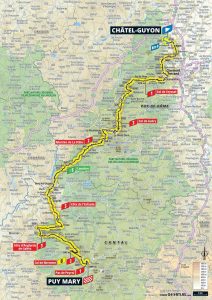