Tour de France Stage 6: Saving the Climbing for the End

Almost all the climbing in this 191km stage comes in the final 30km, which means moves will have to be timed just right.

Almost all the climbing in this 191km stage comes right at the end, but it’s far from straightforward. After 160km of flat to rolling terrain, the race starts heading inexorably uphill, with the Category 3 Col de Mourièzes followed quickly by the Category 1 Col de la Lusette, then a short downhill and flat section before roughly 8km of draggy uphill to the finish at Mont Aigoual.

There’s opportunity to be had, but you’ve got to get the move just right. We’ll likely see an early break go clear, helped by the flat terrain and the likely gentle tailwind for much of the race. But they’ll need a healthy time gap to maintain distance to the pack once they reach the Mourièzes. The lead will likely drop significantly on the Lusette, particularly a 2km-long section near the top where the gradient averages 11 percent.

That’s an ideal launching pad for an aggressive, late-race move. But that carries its own risks. Riders may get a gap there, but they’re still 15km from the finish, and have to make sure there’s enough left in the tank for the 8km of grinding-but-less-steep climb to the finish. To make matters more complicated, the route is unknown to most racers; the last time the race visited this section was 33 years ago, before most of today’s peloton was even born. All that means there’s a serious risk that a too-aggressive move will only result in blowing yourself up. 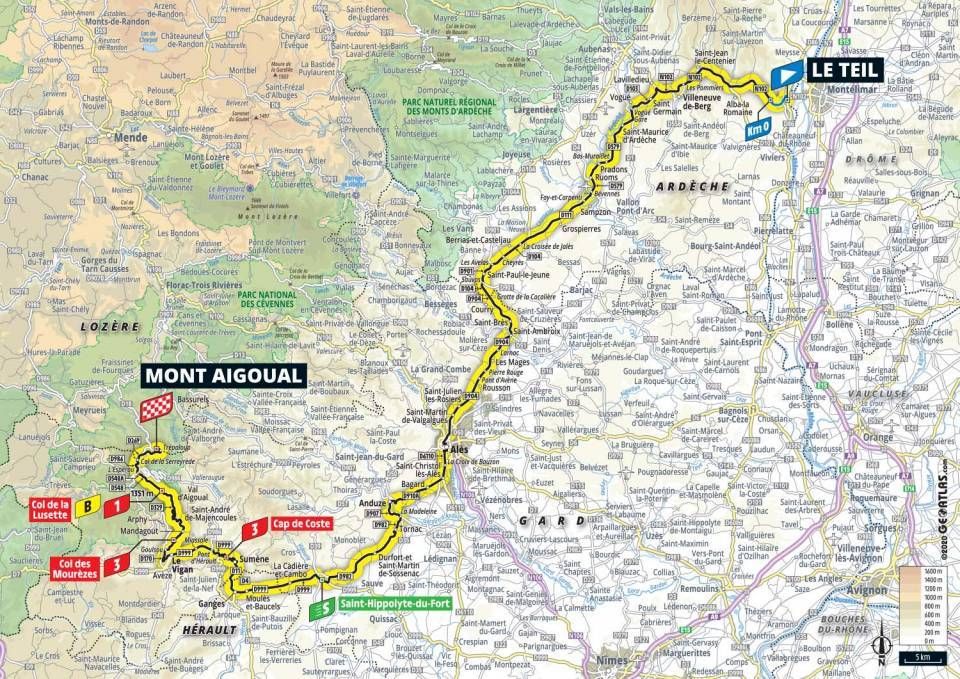 Unless things go very pear-shaped, expect the stage winner to come from a breakaway of some kind. For the GC candidates, Thursday will likely be a day to play defense but watch for opportunities to catch out a rival. Anyone dropped on the Lusette has very little time to re-catch the main contenders group on the short descent and flat section afterward. If they can’t, they may lose a minute or more at the finish, and it’s possible one or more GC aspirants may see their overall hopes evaporate.

So, who will be climbing to the win on Mont Aigoual?

The early breakaway should be a moderate but manageable size: maybe 5-10 riders, from a mix of WorldTour and wild-card teams. Lotto-Soudal’s Thomas de Gendt has been saving energy for several days now; this is a perfect stage for his patented long-range moves. Coconspirators could include riders like CCC’s Alessandro de Marchi. Depending on the mix and how the pack feels, if they have a big gap when they start climbing the Lusette that could discourage counterattacks.

If not (say it’s under four minutes), then it’s all fair game. Riders to watch include climbers who are not threats for the overall, like Jesús Herrada of Cofidis or Israel Start-Up Nation’s Ben Hermans. Spare a thought for Julian Alaphilippe, though. The Deceunick-Quick Step rider finished safely in the top 20 in Stage 5 but lost the yellow jersey after commissaires penalised him 20 seconds for accepting a water bottle from a team staffer late in the race, when feeds are illegal. That will undoubtedly tick him off, and Thursday’s profile is perfectly suited to the kind of bold move for which he’s known. It’s not at all out of consideration that he could try to retake the race lead. Presuming, of course, the schoolboy error by the team wasn’t a ruse to lose the jersey in the first place…in which case, let’s make it another day for the fast-finishing Primoz Roglic. Without the high-mountains (yet) to soften his legs, a finish-line gallop seems likely.