It's a fact of life: At some point, half the population starts experiencing hot flashes, lousy sleep, and muscle loss. But women cyclists don't have to let that wreck rides.

It’s a fact of life: At some point, half the population starts experiencing hot flashes, lousy sleep, and muscle loss. But women cyclists don’t have to let that wreck rides. – By Selene Yeager 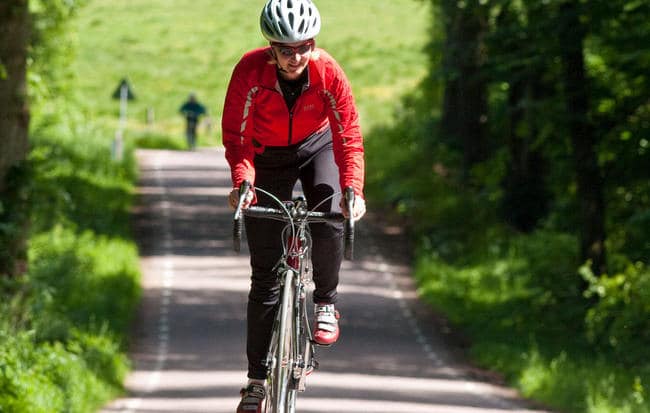 “Hey, Selene!” My friend is a longtime cyclist, avid bike commuter, recreational racer, and not one bit shy about speaking her mind. She’s in town for some races and has a bone to pick with me.”You write about all this cycling stuff every week, but you’ve never written about menopause. How come? It’s a bitch, you know. It would be nice to have someone talking about it.””Well, the cop-out answer is that I’ve never written about it because I haven’t been through it!” I tell her honestly. But it doesn’t take more than a moment’s thought to realize she’s right: The onset of hot flashes, lousy sleep, and muscle loss doesn’t sound like a recipe for cycling success. Yet, in all the years I’ve been writing for and reading mainstream cycling magazines, I can’t recall ever seeing menopause addressed. And to point that finger right back at myself: Though I have researched and written a great deal about menopause for women’s magazines like Prevention, I’ve never offered a lick of advice on it in the pages of Bicycling.Time to change that. Starting now. Because when I look around the cycling community at large, from the elite racing fields to the usual shop, social, and charity riders, it’s clear that there are a significant number of women who will be, if they are not already, heading into “the change.”RELATED: Men and Women Are Not Created Equal

That’s what menopause was called for years before we got comfortable with using words like “menopause” – the change. Which is okay, but it implies just one change – the end of your menstrual periods. Of course, that alone is a pretty seismic change that is itself brought on by a series of changes, and it leads to a succeeding series of changes that go beyond simple freedom from feminine hygiene products.

Outside of the obvious—you’re no longer ovulating and can no longer get pregnant—the main metabolic change many women notice is body composition. As the estrogen level drops, there’s a tendency to accumulate fat in your belly and to lose lean muscle mass. That’s a problem for a few reasons. If you can’t maintain your muscle, you can’t produce the power to push those pedals up hills or in a paceline as hard, and you’re bound to slow down—especially if you’re also gaining body fat. Even if you aren’t a racer, gaining weight and slowing down just aren’t fun.

That’s not all. Even if you maintain your body composition, the hormone shift with menopause brings on some permanent changes in your metabolism that can affect your training and riding, as well as your overall sense of well-being. For some advice on that front, I called up my go-to source for all things female physiology: exercise physiologist, nutrition scientist, and fellow cyclist Stacy Sims, who has devoted about 20 years to studying these issues. Here’s her short list of what you can do to keep on rolling strong.

RELATED: 5 Ways to Be a Better Fat Burner

Handle the Heat
“Postmenopausal women break into a sweat later during exercise and they vasodilate longer,” explains Sims. In plain language, that means your body sends more blood to the skin to get rid of heat, since it can’t rely on perspiration to cool you. It’s also harder for you to handle increases in your core temperature. So racing and/or riding in the heat is just plain harder.

Hydration becomes even more important during menopause and beyond. If you’re going out for a long and/or hard ride in the heat, prehydrate with a sodium-rich drink before you get on the bike. Take in at least a bottle an hour while riding and grab a protein-rich recovery drink to sip on when you’re done. Consider also cooling yourself before exercising in hot weather by draping a cold towel around your neck. Consume ice-cold fluid during your ride if you can. And to cool down and speed recovery, dip yourself in a cold bath or pool when you’re done to help constrict those dilated blood vessels so your blood returns to your central circulation.

Speaking of heat, hot flashes are one of the hallmarks of menopause. Studies are mixed on how much exercise helps alleviate them, but most have found that active women have fewer or at least less extreme ones than those who aren’t active.

Curb the Carbohydrates
You become more sensitive to carbohydrates as you enter menopause, which means you’re more susceptible to blood-sugar swings, and you actually need fewer carbohydrates overall, says Sims. “Eat more mixed-macronutrient foods during your rides,” she says. “Aiming to get about 30 grams of carbohydrate per hour”—about what’s in one banana—”on long rides is probably sufficient.”

Get Particular About Protein
Your body uses protein less effectively as you approach menopause and in the years after, making it more difficult to maintain your muscle integrity. Recovery is harder, as is holding on to your lean muscle tissue. That means you need to be pickier about the proteins you consume.

“It’s essential for menopausal and postmenopausal women to lower their post-exercise stress hormones, like cortisol, as quickly as possible, since that makes you catabolic, and you can’t afford to be eating into your muscle tissue at this point,” says Sims. That means bathing your damaged muscle fibres in essential amino acids, which helps stop the production of cortisol and promotes muscle synthesis and repair. “You don’t want soy at all,” says Sims, noting that many women reach for soy proteins with the thought that they’re better for women. “It may help stop cortisol, but it does nothing for muscle synthesis. You want whey and casein for the best results.”

Sims recommends taking 15 grams of whey or 9 grams of BCAAs (branched-chain amino acids) about a half hour before training. After you’ve racked your bike, get another 25 grams of protein within 30 minutes. If you’re training hard, get another 20 to 25 grams of mixed protein 2 hours after training and 10 to 15 grams before bed.

If it sounds like you’re piling on the protein, it’s because you are. You need it. And it’s still well within the 90 grams a day that protein researchers like the University of Illinois’ emeritus professor Donald K. Layman, PhD, recommend for active women, especially those who are also watching their weight or trying to lose a few kilograms. Personally, I swear by 30 grams—sometimes more—per meal, especially when I’m doing lots of riding and racing. As a bonus: Extra protein may boost your immunity to protect you from getting sick when you’re training hard.

Ride Faster and Harder—Sometimes
The speed and strength of your muscle contractions often decrease after menopause. You can counteract that by shifting your training to focus more on power—think intervals on the bike and strength training in the gym—and a bit less on those long, steady, and often slower endurance rides. “Power and speed training are essential elements in a postmenopausal woman’s training arsenal,” says Sims. Add interval workouts and strength moves to your routine: You’ll be happy you did.

Reclaim Your Sleep
Insomnia is common during menopause, as are night sweats, which can be extremely disruptive to sleep. And, of course, poor sleep quality is a double whammy, because you need sleep not only to fend off fatigue (which is common during menopause) but also to do the normal nighttime muscle repairs and recovery—and this is during a time when recovery is more difficult in general.

If sleep eludes you, Sims recommends topping off your evening dose of protein with 400 to 600 milligrams of valerian (a herb known for its sleep-inducing properties). “The combination helps with overnight muscle repair, keeps cortisol low (which helps keep the stimulus for developing belly fat low), and helps maintain a lower core body temperature so you’re less likely to experience hot flashes.”

Just Ride!
Finally, just getting out there on your bike will help alleviate some of the nagging symptoms a woman can face during this time of hormonal havoc. While there are very few studies on menopausal athletes, there is a healthy body of research on exercise’s effect on menopause. And it’s overwhelmingly positive.

In one Spanish study, the scientists asked 48 women ages 55 to 72 to either exercise for three hours a week or go about their mostly sedentary lives as usual. At the start of the study, 50 per cent of the women in the exercise group and 58 per cent of the non-exercisers complained of severe menopause symptoms like fatigue and insomnia. By the study’s end, the percentage of women with severe symptoms dropped to 37 per cent in the active group, but rose to 66 per cent among the non-exercisers. The active women also reported better mood and mental well-being, while their non-exercising counterparts were having a tougher time mentally and emotionally. So even if you don’t always feel like it, get out there and ride. You’ll feel better for it. And that’s something that even the change can’t change.

Finally, skeletal health is a big concern for postmenopausal women. Your osteoporosis risk rises sharply during this stage of life. Do resistance and plyometric moves at least twice a week to keep your structural system as strong as the rest of you!