The Fight For The Crown: Shimano VS SRAM

The release of Shimano’s new 12-speed XTR groupset has made buying mountain-biking groupsets all the more difficult. Our Gear Editor pits the two heavyweight contenders against each other.

In the red corner: US-based SRAM. In the blue corner: Japan’s Shimano. In the middle, the fight to dominate the lucrative world of cycling componentry.

Most riders will have at least one component from either or both of these brands on their bikes at some point in their cycling lives.

Even though some brands date back to 1901, it was only in the late 80s and early 90s that a few component makers really started to make an impact: Shimano, Suntour, Sachs, and Campagnolo – and the new kid on the block, SRAM, who came onto the scene in 1990 with their popular Gripshift.
At the time, Suntour were the big Japanese competitor to Shimano; and though popular at first, they lost out in critical innovation to Shimano’s SIS, lagging by two years with their own Accushift.

By 1995, Suntour had ceased to exist as a components manufacturer, becoming SR Suntour after a management buyout. Production tooling for their range of derailleurs and shifters was sold off or scrapped. Today, SR Suntour are known for their suspension and associated component accessories. 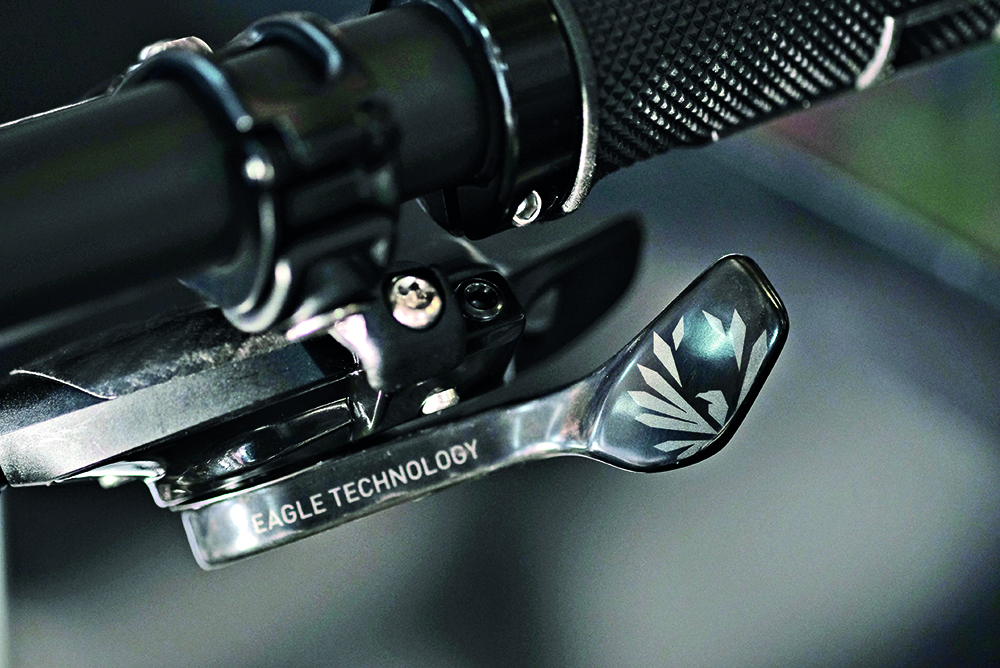 Campagnolo – affectionately referred to as ‘Campy’, and based in Vicenza, Italy – tried out various MTB groupset ranges. Their Euclid, Centaur and Olympus groupsets were followed by the more heavily priced Record OR and Icarus, but they struggled to make an impression.

With their reputation firmly rooted in road cycling, eventually Campy withdrew from mountain biking to continue their focus on road. In road cycling, heritage still plays a big role in component spec; bike brands (the Italians, especially) opt to stand by Campagnolo in order to meet customer expectations.

Which leaves SRAM: the American upstart and new kid on the block out of Chicago, who broke ground with their popular Gripshift shifters and ESP derailleurs. Through the acquisition of brands such as Avid, RockShox, Truvativ, Quarq and Zipp, and aggressive marketing and innovation, SRAM pushed ahead, rising up as a major competitor to Shimano. 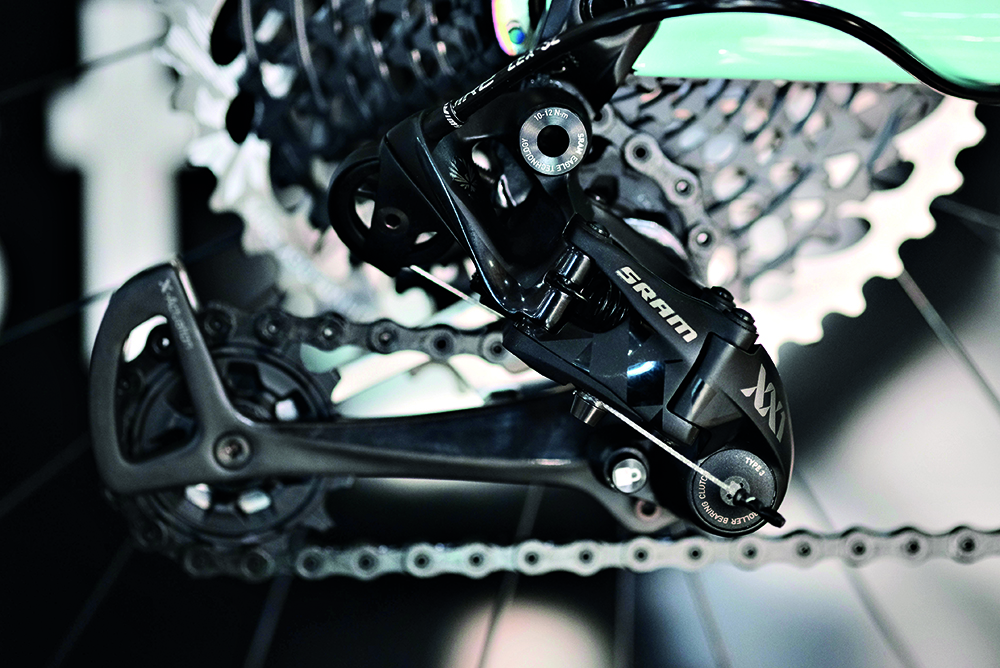 Today, the three-billion-dollar market for groupset components (both MTB and road) is dominated by the pair, Shimano holding a somewhat firmer grip on the total global market with a 50% share.

Constant innovation has pulled us out of the dark ages of 3×7 drivetrains and cantilever brakes, but it’s swings and roundabouts between the two big names. SRAM are committed to 1x set-ups, with Shimano still offering 1x, 2x and even 3x options. Recently, though, Shimano announced their long overdue 12-speed to compete with SRAM’s iconic Eagle – which is already available from XX down to their entry-level NX groupset.

While Shimano’s 12-speed groupset is only about to hit the market at XTR level, their electronic Di2 groupset has been available in both XTR and XT for the last few years. Conversely, SRAM have an Eagle eTap wireless groupset close to completion, which will most probably make it to market shortly after Shimano’s 12-speed XTR. At Eurobike 2018, both manufacturers were quiet on release dates.

Shimano’s trigger shifters are more versatile, in that they can be used with either your forefinger or your thumb. The SLX, XT and XTR shifters are able to double-shift, for faster shifts across gears. SRAM’s trigger shifters are thumb-operated only, but their popular Gripshift is available throughout the range, and has the advantage of being able to move across the entire gear ratio with a single twist.

Currently SRAM are dominating the high-end market, while Shimano service more of the entry-level to mid-range enthusiast segments. In the aftermarket sector the gap is closer between the two, especially at the high-end and flagship level.

Right now SRAM’s XX Eagle 1×12 is by far the more popular choice against Shimano’s current XT and XTR. But this balance could shift, once the Japanese corporation’s newly launched 12-speed groupset – designed to adapt to all styles of riding, from XC to trail – hits the market.

Shimano’s recent approach is not just about gearing and derailleurs. Their new 12-speed introduced four XTR brake calipers designed for the enduro and trail market, while their patented redesigned freehub means it’s difficult to change wheels, unless they’re Shimano or DT Swiss. Not cool, if you happen to own a good set of wheels that are slightly older, and/or fall outside of the DT/Shimano freehub spec.

Currently Eagle’s main competition is Shimano’s electronic Di2, which can effectively turn a 2×11 groupset into a single-shifter set-up with a programmable automatic front derailleur.

SRAM’s comeback is the development of a wireless eTap Eagle, which has already been used to effect at some World Cup races.

While SRAM’s wireless product can be seen as a performance pursuit at the high end, they’ve already filtered Eagle down to NX level.

The key difference between SRAM and Shimano groupsets is the shifting actuation – the distance between shifts relative to the lever index.

Shimano’s 1:1 ratio means the cable and derailleur move further during each shift. For many riders this leads to a crisper shift, translating into better feel and all-round robustness on muddy terrain and under load.

SRAM works on the tighter tolerance of a 2:1 ratio. Ideally, this means smoother shifts with less effort – although the downside is difficulty in gauging shifting feedback while riding, which can lead to unintended force under load.

Founded in 1987, SRAM is privately owned and run as a bicycling component manufacturer. Based in Chicago, Illinois, USA, SRAM is an abbreviation for the names of its founders: Scott, Ray (the CEO) and Sam. 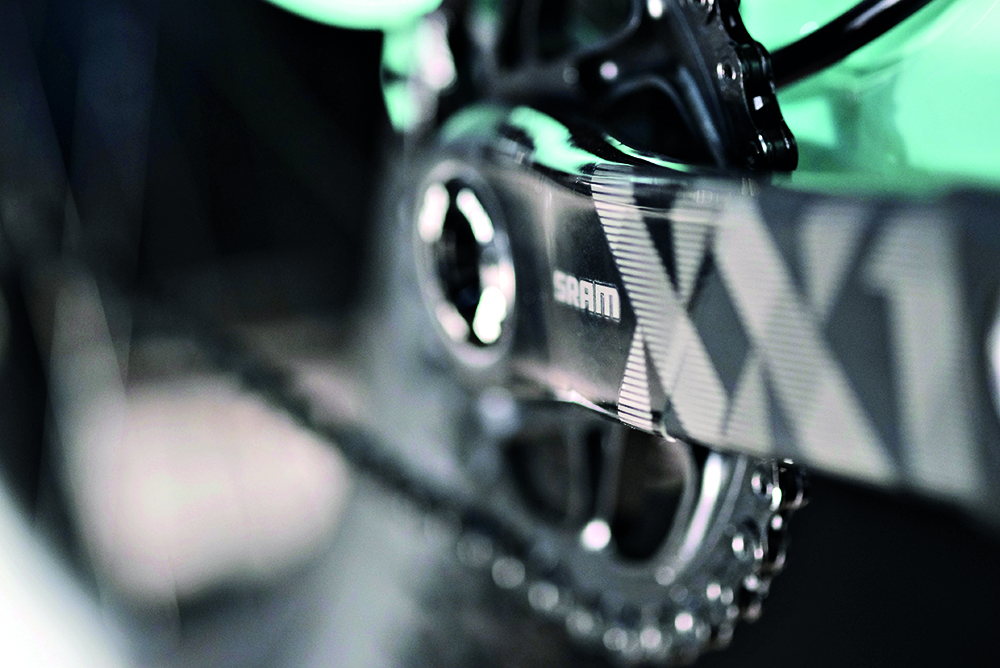 Founded in 1921, Shimano is publicly listed and still run by the Shimano family to this day. It manufactures cycling components, as well as fishing and rowing equipment (until 2005 and 2008 respectively, Shimano also made golfing and snowboarding gear). Based in Sakai, Osaka, Shimano Japan is run by Yozo and Yoshiko Shimano as President and Chairman.

SRAM are the cool kids on the block, and are often first to market – the big gold Eagle cassette launched in 2016, for example, that’s already trickling down to cheaper groupsets.

Shimano are more conservative. They often take a while to deliver new technology; but when they do, you can bank on their craftsmanship.

Sometimes, choosing the right groupset comes down simply to looks. And there’s nothing more subjective than that.