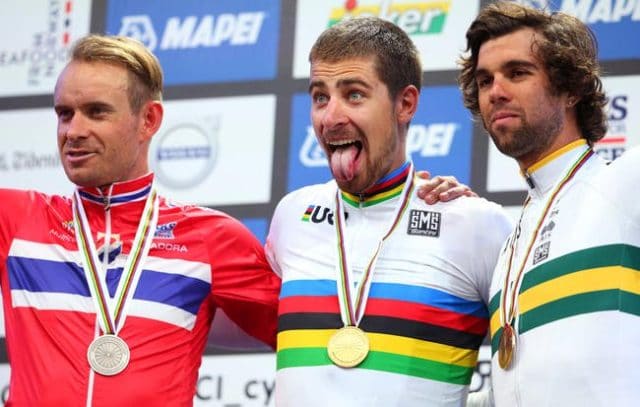 Three-time world champion Peter Sagan and his wife, Katerina, announced on Wednesday that they’ve had their first child, Marlon, a baby boy. Sagan broke the news on his Facebook page.

At age 27, Sagan already enjoys a reputation as a one-of-a-kind racer. The Slovakian is known for his trademark moves (like wheelie-ing up Mont Ventoux) and flaunting the conventions of cycling fashion. He’s also somewhat infamous for pounding gummy bears after a hard race.

Some spectators have wondered if fame, fortune, and life changes will lead him to quit. (Sagan is currently one of the most highly compensated racers in pro cycling.) Although he took a break from the sport to welcome his first child, nothing has yet dimmed the pro rider’s competitiveness. After his wedding in 2015, he told reporters that marriage hadn’t changed him. But he added, “I think maybe a child could change my habits.”

Sagan has worked with kids before, both with his two foundations in Slovakia (the Peter Sagan Kids Tour and the Peter Sagan Academy), and through his involvement with Specialized’s children’s cycling camps.

Perhaps with a mini-Sagan in his corner, 2018 could be the year.