FROM THE SPRING CLASSICS TO THE TOUR TO THE OLYMPICS, HERE’S WHERE THE BEST RACING WILL HAPPEN THIS YEAR.

So far so good: after a few weeks of relatively trouble-free racing, the 2021 season is underway with early season races taking place in the south of France.

And while the spectre of COVID-19 still looms large, we’re keeping our fingers crossed that—for the most part at least—the season can move ahead as scheduled. Here’s a rundown of 11 races we can’t wait to see in 2021. 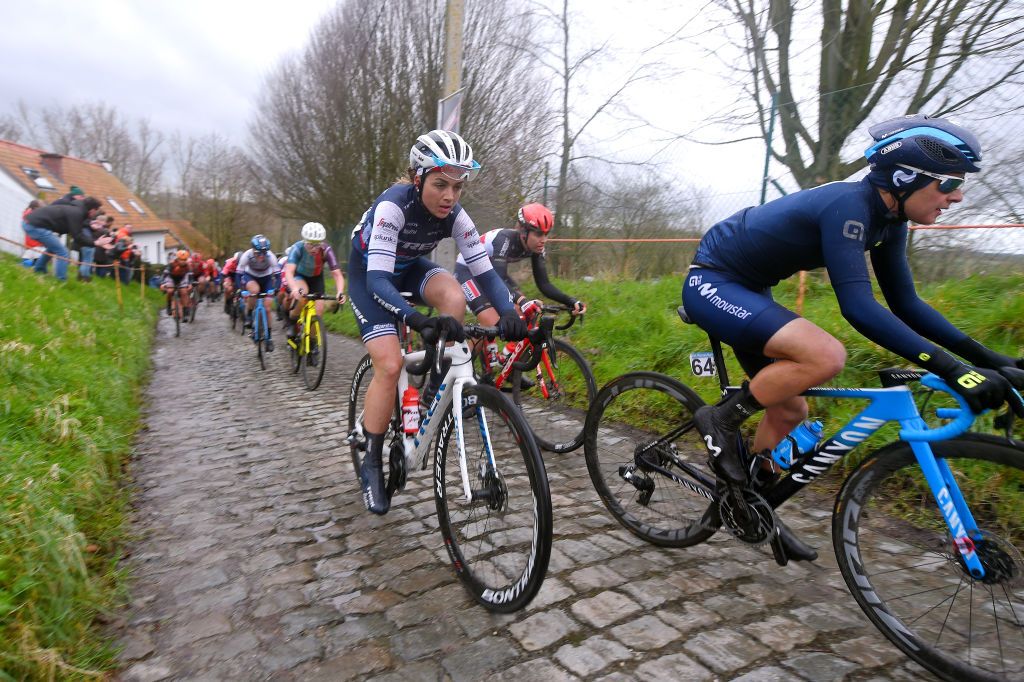 While racing got underway a few weeks ago in southern France, most riders and fans don’t consider the season to have really started until the running of the Omloop Het Nieuwsblad, Belgium’s first race of the year. With events for both men and women, the “Omloop,” as it’s affectionately called, offers everything we love about the spring Classics: rain, wind, cobblestones, and many of the short, steep “bergs” that speckle the Flemish countryside. On the men’s side, look for Belgians to lead the way, with last year’s winner Jasper Stuyven of Trek-Segafredo and AG2R-Citroen’s Greg Van Avermaet, a two-time Omloop winner, topping the list of favourites.

The women’s event should be headlined by the defending champion, Annemiek van Vleuten, who now rides for Movistar after transferring from Mitchelton-Scott during the offseason. She’ll likely face stiff competition from Trek-Segafredo’s duo of Lizzie Deignan, who won the race in 2016, and Elisa Longo Borghini, who won the Tour of Flanders in 2015 but has yet to add the Omloop to her already-impressive resume. 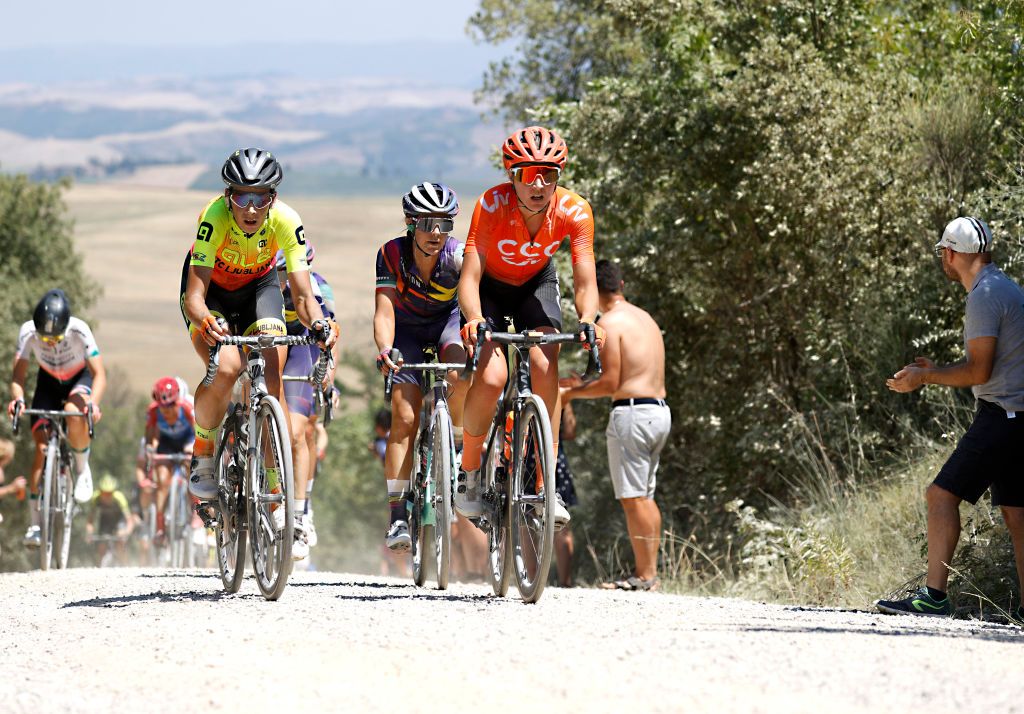 Taking place on the white gravel roads of Tuscany, Strade Bianche is easily one of the hardest and most beautiful races of the year. One of a handful of races in which the strongest rider always wins, it makes sense that the event’s list of winners reads like a Who’s Who of the sport’s best racers.

For example, Jumbo-Visma’s Wout van Aert won last year’s men’s edition (held in August after being postponed due to COVID-19), just a week before winning Milan-Sanremo. The Belgian should top the list of this year’s male contenders, alongside Quick-Step’s Julian Alaphilippe, the reigning world champion, who won Strade Bianche in 2019, two weeks before taking his own victory in Milan-Sanremo.

On the women’s side, van Vleuten, winner in 2019 and 2020, is a favourite to win her third in a row. SD Worx’s Anna van der Breggen, the current world champion, and Trek-Segafredo’s Longo Borghini, who won the race in 2017, are the best bets to stop van Vleuten’s streak. 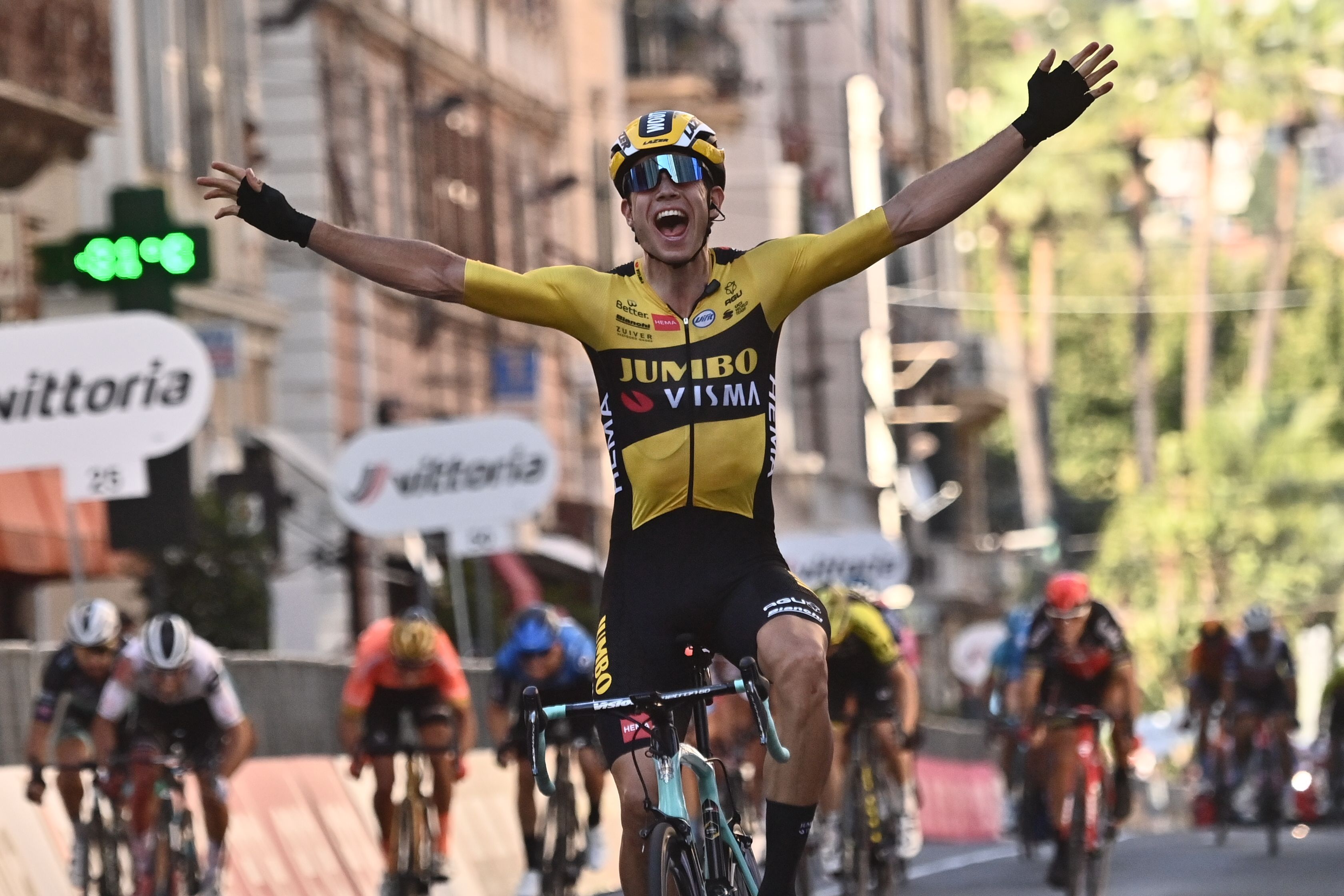 At almost 300km, Milan-Sanremo is the longest one-day race on the calendar. And thanks to the fact that the outcome is almost always decided in the final 10km, the riders say it’s the easiest race to finish, but the hardest to win.

The first of cycling’s five “Monuments,” we love Milan-Sanremo’s slow build to the finish as the riders head south from Milan toward the coast, then wind their way along the sea before racing into the climbs that make-up the Monument’s traditional finale—especially the Poggio, a short, punchy ascent just a few kilometers from the finish line whose treacherous descent often creates more gaps than the climb itself. The race is ideal for riders who can climb, descend, and win a small group sprint—riders like van Aert and Alaphilippe, winners in 2020 and 2019, respectively. And we always keep an eye on BORA-Hansgrohe’s Peter Sagan, who’s never won Milan-Sanremo despite being perfectly-suited to it.

WATCH THIS Peter Sagan Has some Mad Skills 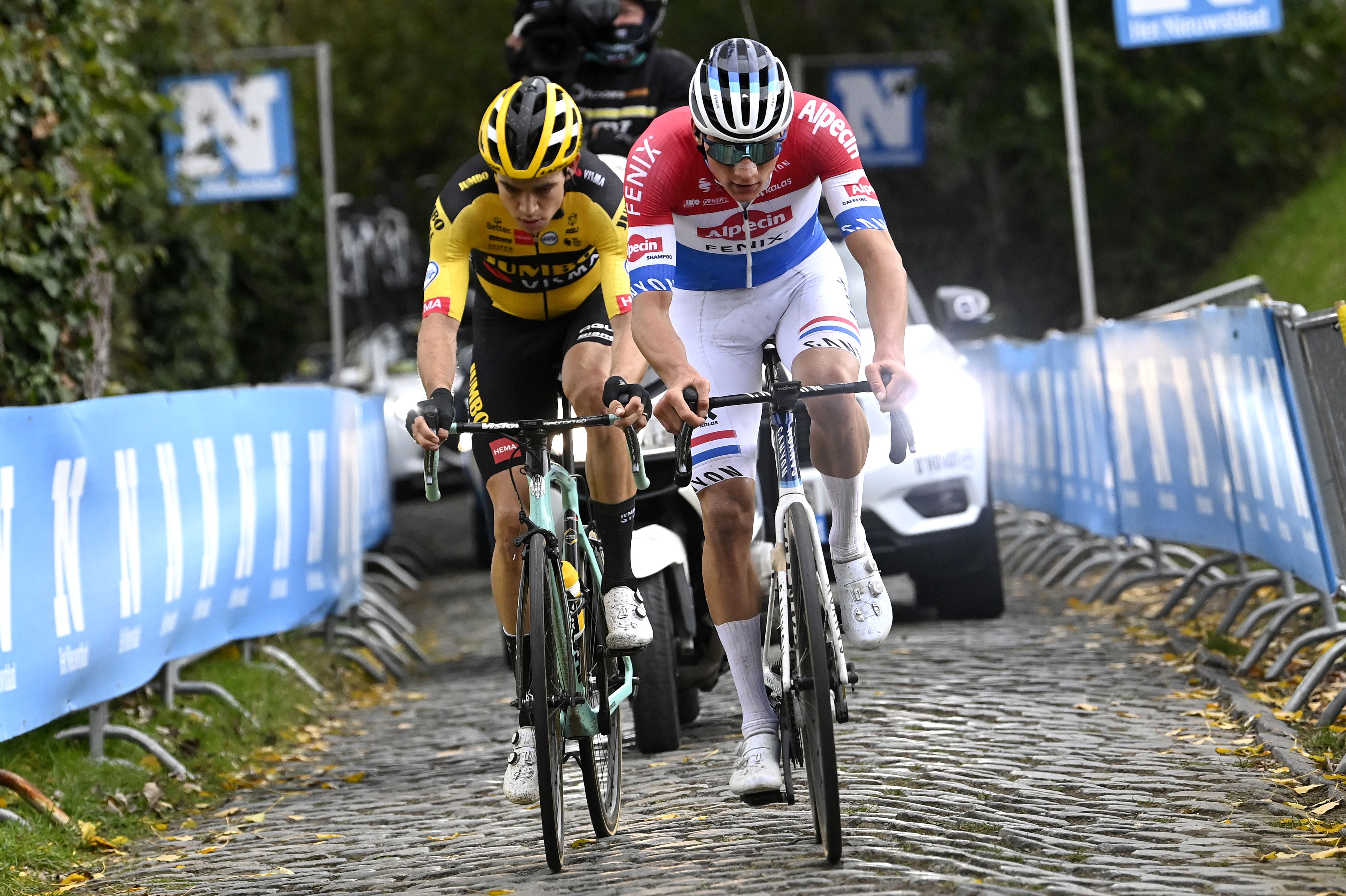 Many riders consider the Tour of Flanders (known locally as the “Ronde van Vlaanderen”) to be the hardest one-day race on the calendar. The men’s event features over 250km of the toughest terrain in the Flemish region of Belgium, with tight, technical roads, cobblestones, and short, steep climbs. The course is so challenging that it can take years for a rider to master the nuances of the race enough to actually contend to win it.

Last year’s men’s edition was perhaps the race of the year with van Aert, Alaphilippe, and Alpecin-Fenix’s Mathieu van der Poel escaping late in the race to form one of the strongest breakaways of the season. Alaphilippe soon crashed, leaving van der Poel and van Aert to fight for the win. (Rather than spoil it for you, go watch the finish on YouTube.) Expect these two to again be the top contenders in the men’s race, with Alaphilippe hopefully coming back to try and become the first French winner of the Ronde since 1992.

In the women’s event, look for a battle between the Dutch and the Italians with SD-Worx’s Chantal Blaak, the defending champion, headlining a list of contenders that includes her compatriots, van Vleuten, Jumbo-Visma’s Marianne Vos, and van der Breggan (who won in 2018). For the Italians, Longo Borghini and Alé BTC Ljubljana’s Marta Bastianelli (who won the race in 2019) should lead the way. Incidentally, Team DSM’s Coryn Rivera won the race in 2017 to become the only American to have ever conquered “de Ronde.” 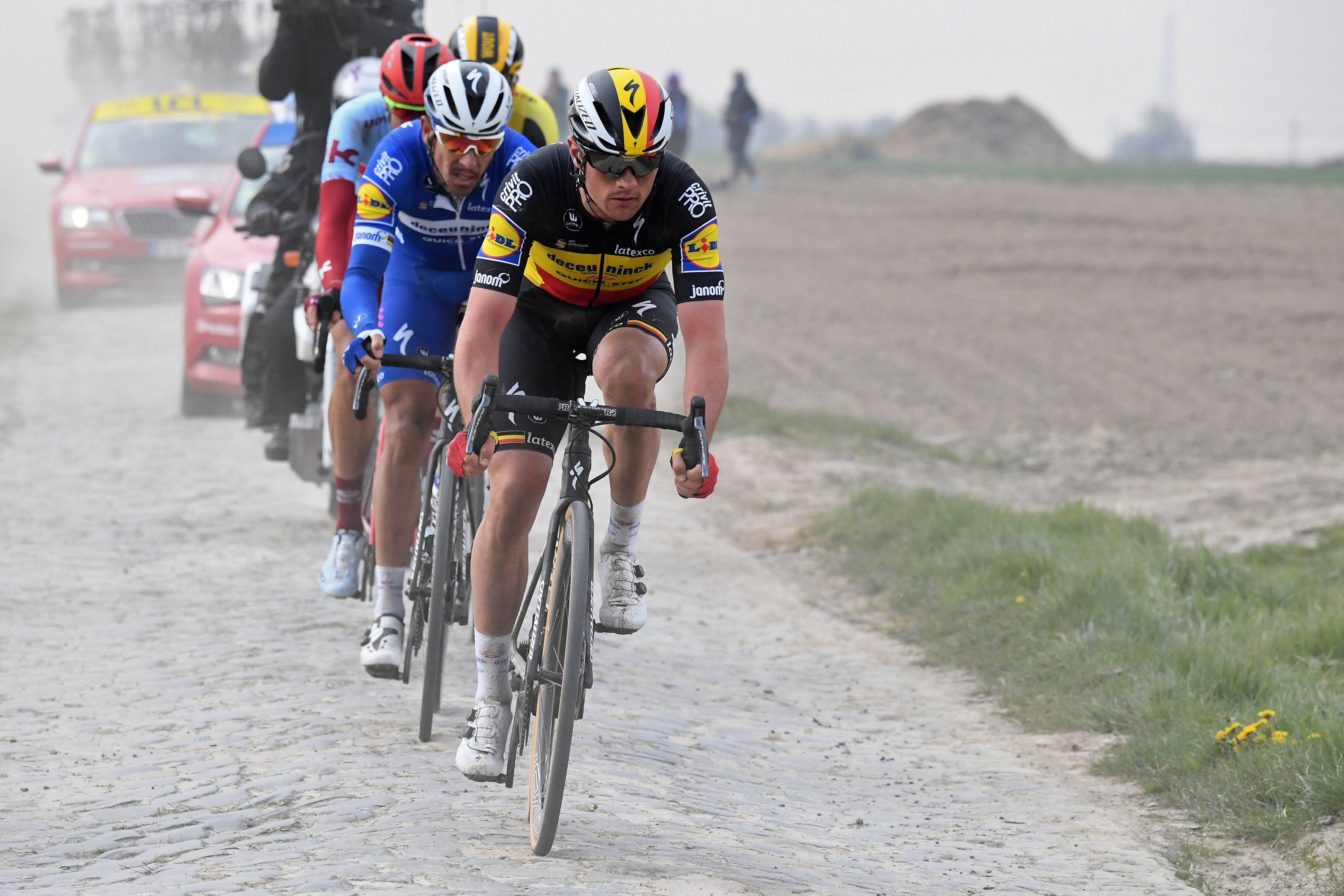 The “Hell of the North.” The “Queen of the Classics.” Whatever you call it, Paris-Roubaix is probably our favorite race on the calendar. The final half of this 255km Monument includes about 55km of Northern France’s worst cobbled roads, so it’s packed with drama and always produces a worthy champion—even when it’s a dark horse. Canceled last year, we can’t wait to see another episode in what is quickly becoming one of the greatest racing rivalries in the history of the sport: van der Poel vs. van Aert.

But this year’s biggest news will be the running of the first ever women’s Paris-Roubaix, which will be run earlier in the day along many of the same roads. It will be awesome to see the women’s peloton—most likely led by the previous week’s Flanders protagonists—finally hit the pavé. The race is a long overdue addition to the calendar, which means three of cycling’s Monuments now have women’s events running alongside the men’s.

Before gravel riding was all the rage, there was France’s Tro-Bro Léon, a small French race run in Brittany each spring. The race is known for including more than 20 sections of ribinoù, the dirt, gravel, and cobbled farm roads that criss-cross the region. And the best part? The winner gets a pig!

Even better: now we can watch it live with GCN’s new Race Pass, a live streaming service that looks poised to become one of 2021’s best options for year-long—legal—live streaming. 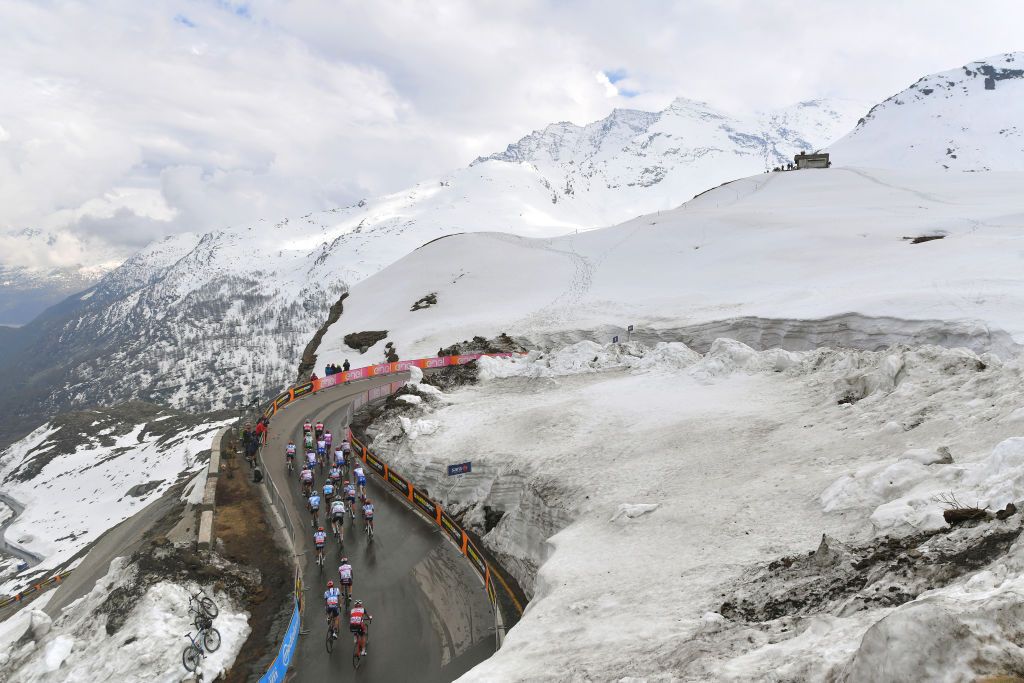 While the Tour de France gets all the prestige, the riders generally consider the Tour of Italy (the “Giro d’Italia”) to offer much, much harder racing. The start list is far from complete, but one rider who’s already announced his participation is Egan Bernal of INEOS Grenadiers. The Colombian won the Tour de France in 2019, only to abandon last year’s Tour after a back injury derailed his chances of defending his title. And while we still don’t know the full route, if past editions can be trusted the race will be mountainous, which plays to Bernal’s strengths. 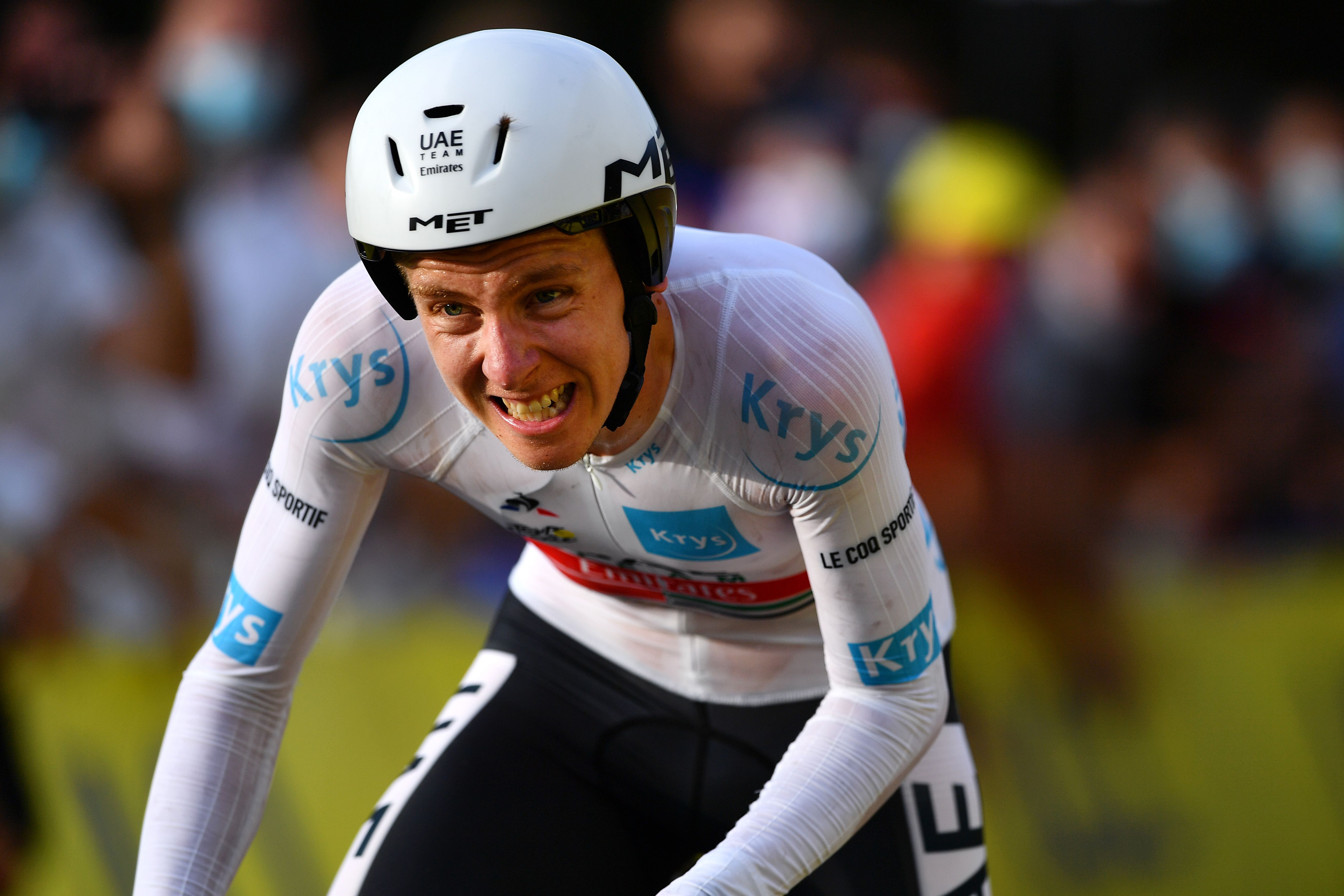 Last year’s Tour de France was one of the most exciting we’ve ever seen with UAE’s Tadej Pogačar overtaking Jumbo-Visma’s Primož Roglič on the second-to-last day to win the race overall. We expect the Slovenians to return this year, competing on a course that starts in Brittany, heads down to the Alps, and then wraps-up in Pyrenees.

The Tour could be decided in the race’s two individual time trials—on Stages 5 and 20—but we’ve got our eyes on Stage 11, which tackles Mont Ventoux not once but twice—from both sides. The Tour hasn’t seen racing up Ventoux—an extinct volcano whose wind-swept, lunar landscape looms over the Provence region—since 2016 (when Team Sky’s Chris Froome was forced to run after being knocked off his bike in a crash).

Left off the INEOS Grenadiers Tour team last year, Froome will be back in 2021, this time as the captain of Team Israel Start-Up Nation, which signed the four-time Tour champ last summer. INEOS will be led by Gerraint Thomas, who won the Tour in 2018 and might have defended his title in 2019 had it not been for his teammate Egan Bernal. 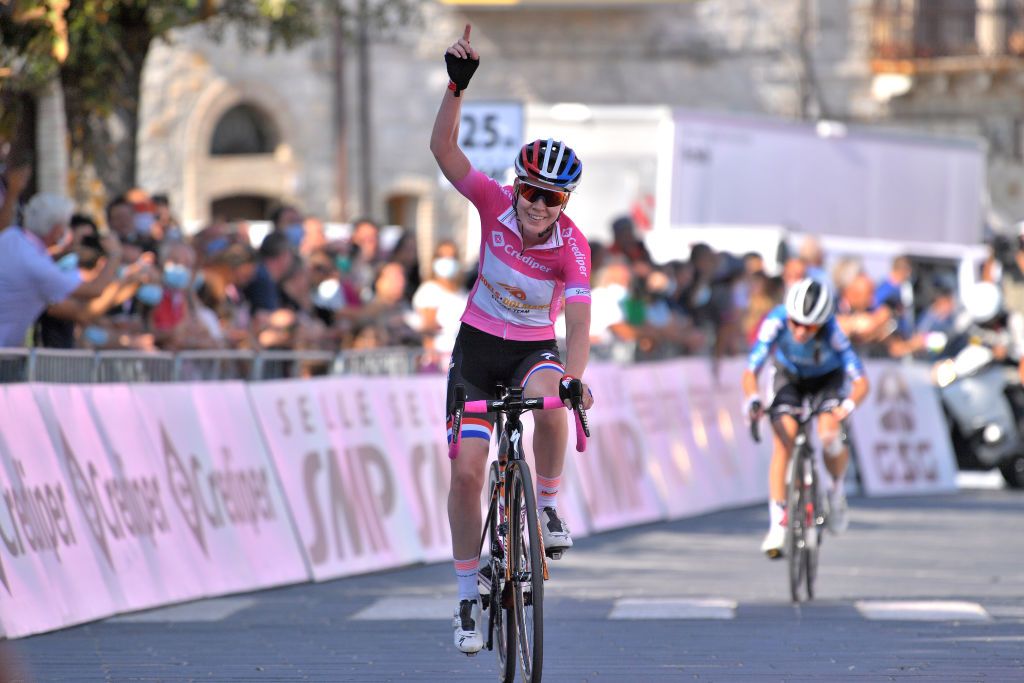 Officially called the “Giro d’Italia Internazionale Femminile,” the Giro Rosa is a 10-day Italian stage race that—in the absence of a women’s Tour de France—is the longest, hardest, and most prestigious women’s stage race on the calendar. Pushed to September due to COVID-19, last year’s was one of the most dramatic in recent memory with a team time trial, a stage featuring white gravel roads (similar to those used in Strade Bianche), and two mountain stages on the final weekend. Van der Breggan won the race for the third time in her career, taking the lead on the second-to-last day after van Vleuten, who had been leading the race since Stage 2, crashed and broke her wrist.

Ashleigh Moolman-Pasio will be racing in new team kit for 2021 – SD Worx – and will be hoping to repeat her recent form in this event, racing to second, fourth and sixth in the last three of her 10 career appearances.

Details have yet to emerge about this year’s course (they always arrive at the last-minute), but we expect to see van Vleuten taking the start in a bid to join her compatriots van der Breggan and Vos as three-time winners of the event. (Italy’s Fabiana Luperini holds the record with five.)

How to Watch:We’re still waiting to hear if the race will be streamed in 2021. In 2019, Trek partnered with Voxwomen to provide a one hour wrap-up show after each stage, a major step forward for an event that deserves a much wider audience. Stay tuned.

The Olympics – July 24 through August 8 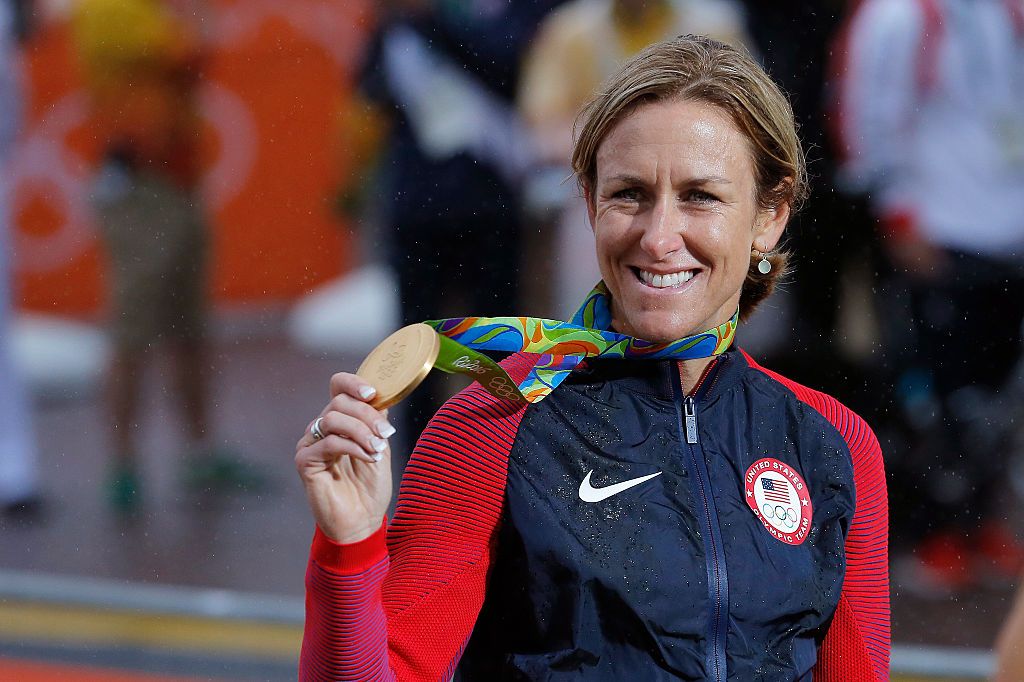 Yes, we’ve heard the rumours too, but for now we’re still hoping that the Olympic Games will run as planned this summer. For cycling fans, the action starts right away with the women’s and men’s road races taking place during the Games’ opening weekend. Both races take place on circuits on the outskirts of Tokyo, with the men racing a decidedly hillier course than the women—a disappointment for fans hoping to see the women’s peloton showcased to the same extent as the men’s.

The time trials take place a few days later, where we’ll expect to see American Chloé Dygert going for the gold medal in an event she’s dominated over the past few years. The same goes for Kate Courtney, who should enter the mountain biking event as one of the top favourites for a gold medal as well.

Overall, with events for road, mountain, and track cyclists—as well BMX racing and freestyle (a brand new event) competitions—the 2021 Olympic Games will have more to offer cycling fans than ever before.

The Tour of Spain – August 14 through September 5 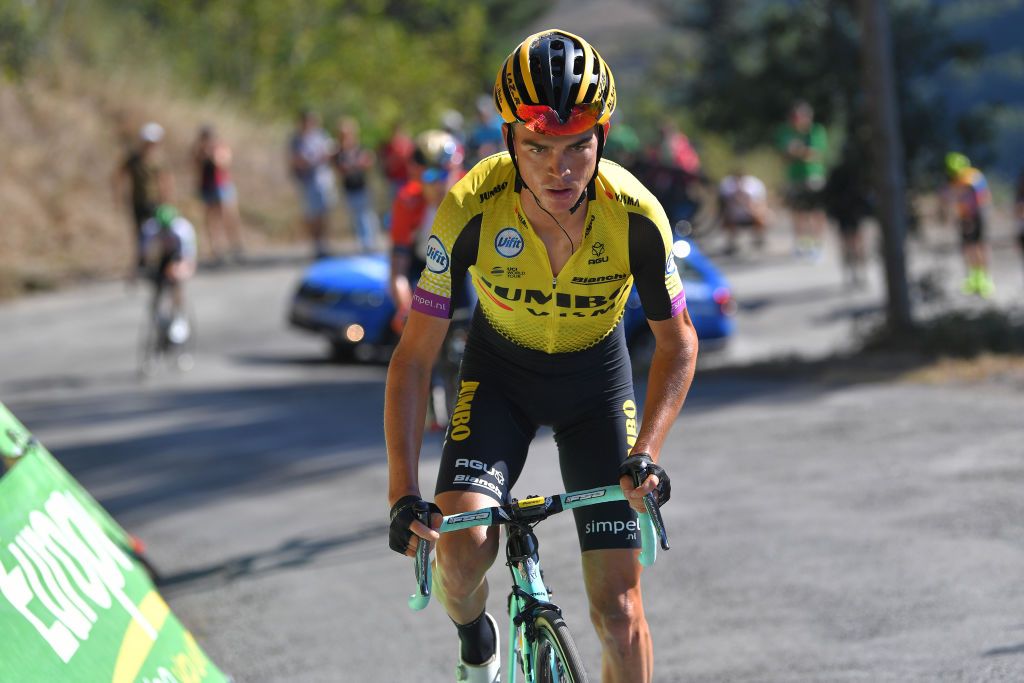 As the final grand tour of the season, the racing is hot at the Tour of Spain (“Vuelta a España”) which is traditionally a last chance for riders hoping to end the year on high note, earn a contract for the following season, or get themselves in shape for the world championships in late September. With lots of mountains and motivated riders, the Vuelta always delivers some of the year’s most exciting finishes.