How aero tucks work for the pros on descents, and why you might want to think twice before trying one yourself.

How aero tucks work for the pros on descents, and why you might want to think twice before trying one yourself. – Berne Broudy 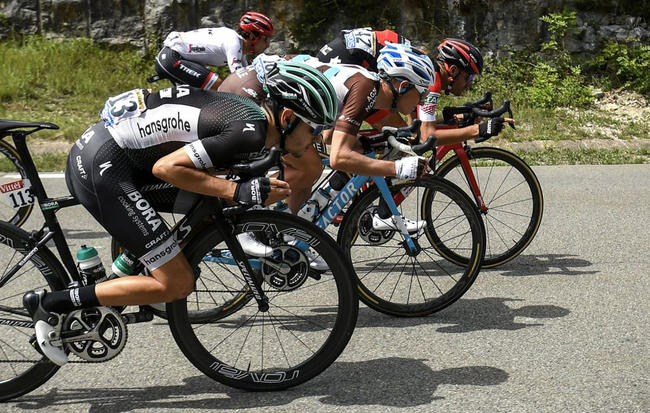 As the Tour de France heads into the mountains, we’re seeing some some unconventional descending positions, as riders aim to gain every second of free speed they can muster. Here’s what aerodynamic experts have to say about the pros’ super tucks, and some tips on refining your own.“Cylinders. That’s what slows you down,” says Ingmar Jungnickel, aerodynamics R&D engineer for Specialized Bicycles. “Bike fitting is often focused on the rider’s back, but what we learned in the wind tunnel is that legs are 50 per cent of your total drag.”RELATED: Chris Froome’s Infamous Aero-Tuck Isn’t as Aero as You’d Think

“Everyone has two giant tree trunks going down to the frame,” explains Chris Yu, Specialized’s director of integrated technology. The idea is that “by sitting on the top tube, you’re bending your legs and reducing the height and surface area exposed to the wind, which cuts resistance and saves time.”

And looks alone would say that the super tuck is the fastest position. But it turns out one position isn’t the fastest for everyone. “How efficient you are is really a combination of shape and size,” says Yu. “And what’s best for an elite racer is really hard to generalise. We can’t just say the smaller you make yourself the better; your shape is equally important, and how your shape interplays with your size and your frontal area—how big a parachute you are—is hard to predict. There are general rules of thumb when it comes to aero, but there are always exceptions,” said Yu.

It’s also worth noting that in the supertuck postion, most riders don’t pedal, which isn’t great for preventing lactic acid buildup. “Big descents usually come after a big climb, and sitting on the top tube without moving your legs can blow up your legs more than a position where you can spin,” says Jungnickel.

This may be what led Bert Blocken of the Eindhoven University of Technology in the Netherlands to criticise Chris Froome’s Stage 8 tuck as not necessarily the most efficient.

Tucking arms, legs, and head should improve your speed. But Jungnickel notes, “if dropping your handlebar leads to straightening your arms, that will probably make you slower. Dropping your head and wearing an aero helmet will both help, but you still need to be able to see.”

Jungnickel says that based on what he’s observed with drag delta [change] and rider ability, if you’re not cranking out pro-rider level watts, you should just try to stay in the drops and get as low as you can. “And if it’s a position where you can pedal, the benefits are often the same. The drag delta for that middle position is not huge.”

Yu agrees that for most recreational riders, riding low and in the drops is the most advantageous position. “It’s more consistent, so you get more consistent benefit because you’re reducing the variability in your upper body and arms. And if you don’t have to control the brakes, you can have your hands on the center of stem and bar. That way you’ve broken up both sets of cylinders.”

Aerodynamically, Yu says the Superman—hands on the bars, belly on the saddle, legs extended behind, has the least drag. “It’s fast,” he says. “The wind is off your legs. But it’s not so good for anything else.”

If you want to experiment to maximise your aero advantage, try to find consistent conditions—same tyre pressure, kit, time of day—and test a few positions. “Get a gut check on how sensitive your home experiment is,” says Yu. “Try the hoods, then the drops and time both. That should help you get a sense of scale and start to build a picture of what other positions may bring you for benefits.”

“Also, practice your turns,” says Yu. “Most of us lose vastly more time in turns than we can gain with a more aero efficient position.”