Olympic Cycling – When To Watch the Road, Triathlon and MTB Events

The 2020 Olympic Games start on Saturday with the toughest road race in decades - here's who and how to watch.

Farewell, Tour de France; hello Olympic Games!  The cycling events at the 2020 games start in Tokyo on Saturday, 24 July, with the men’s road race.  Yes, it is still called Tokyo 2020, that isn’t a typo half-way through. This is the Covid-delayed  Games, and there is still a chance it might not happen at all – already, spectators aren’t allowed, and athletes are already testing positive for COVID in the Olympic village. We can but hold thumbs, for the health of the athletes and our viewing pleasure, it all works out. In the meantime, let’s take a look at what is happening, when, and who we can shout for.

One of the toughest routes in many Olympics, with five recognised climbs, including one partway up Mt. Fuji (14.3 km at 6%) and the steep Mikuni Pass climb (6.5 km at 10.6%). Ostensibly, this is one for the climbers, but championship races are more often than not races of attrition, with the puncheurs breaking the legs of the true mountain goats with repeated short efforts long before their power-to-weight advantage comes into play. 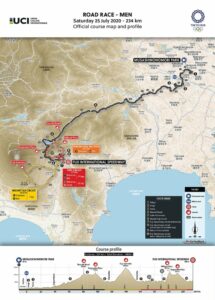 Who to shout for: Ashleigh Moolman-Pasio, Carla Oberholzer

Unfortunately, the toughest climbs the men’s racers face aren’t on the women’s parcours, which is a great pity for Ashleigh after her spectacular mountain-top win in the Giro Donne a fortnight ago. Still, with nearly 2 700 metres of climbing, this will be a very hard race and one where, if she can ride the train of the Dutch and Belgian squads – many of whom are her team mates the rest of the year – a medal is a distinct possibility. 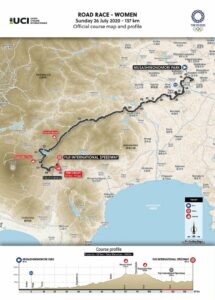 Who to shout for: Ashleigh Moolman-Pasio

As time trial routes go, this is pretty darned hilly! A good one for the more GC-type riders, with some climbing legs, rather than the pure power houses. Again, not a bad parcours for Ashleigh. Get up early and channel all that support!

Who to shout for: Stefan de Bod

Two laps of the circuit used by the women, another brutal day out suited to the skinnier mountain goat GC men, over the pure wattage monsters. 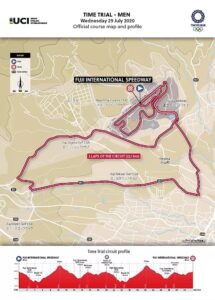 Who to shout for: Henri Schoeman

The Tokyo 2020 triathlon course will take place around Odaiba Marine Park in the Tokyo Bay area. For the 1.5km swim leg the athletes will complete two laps of a circular circuit in the bay, while the 40km bike leg will be split into eight laps of a technical course in and around the wider park. The 10km running leg will comprise four laps of a shorter, 2.5km-long circuit around the park. Both Saffas are outside medal hopes, on their day, as Schoeman proved in Rio, but with the stacked field in Tokyo that might require some luck as well as top form.  [Editor’s note – Richard Murray’s health has forced him to withdraw from the triathlon event – 23 July]

Who to shout for: Gillian Sanders, Simone Ackermann 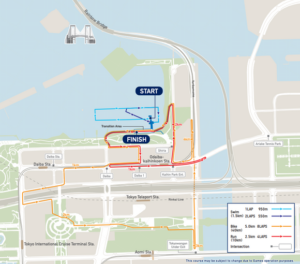 Who to shout for: Alan Hatherly

The riders take on 7-9 laps of a tough 4.1km, 150m gain circuit. Alan Hatherly has been on an upward trajectory in the World Cup events leading up to the games, with 5th in the most recent round just two weeks before the Games, so it isn’t too much of a stretch to see him mopping up some places behind the Van der Poel/Pidcock/Fluckiger showdown and sneaking pretty close to a medal should the casualties of that war blow up completely.

Who to shout for: Candice Lill

The women race the same course, just a couple of laps fewer. 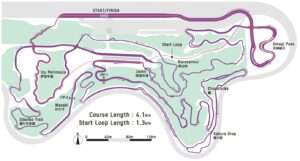 We will cover the BMX and Track events in a separate post next week, closer to those events.

How to get your Olympic fix

Supersport, your channel of champions (and medallists!) is the place to go, or GCN (if you have a VPN to get around the geo-restrictions. The above times were correct according to the clumsy DSTV schedules at the time of writing, please double-check!